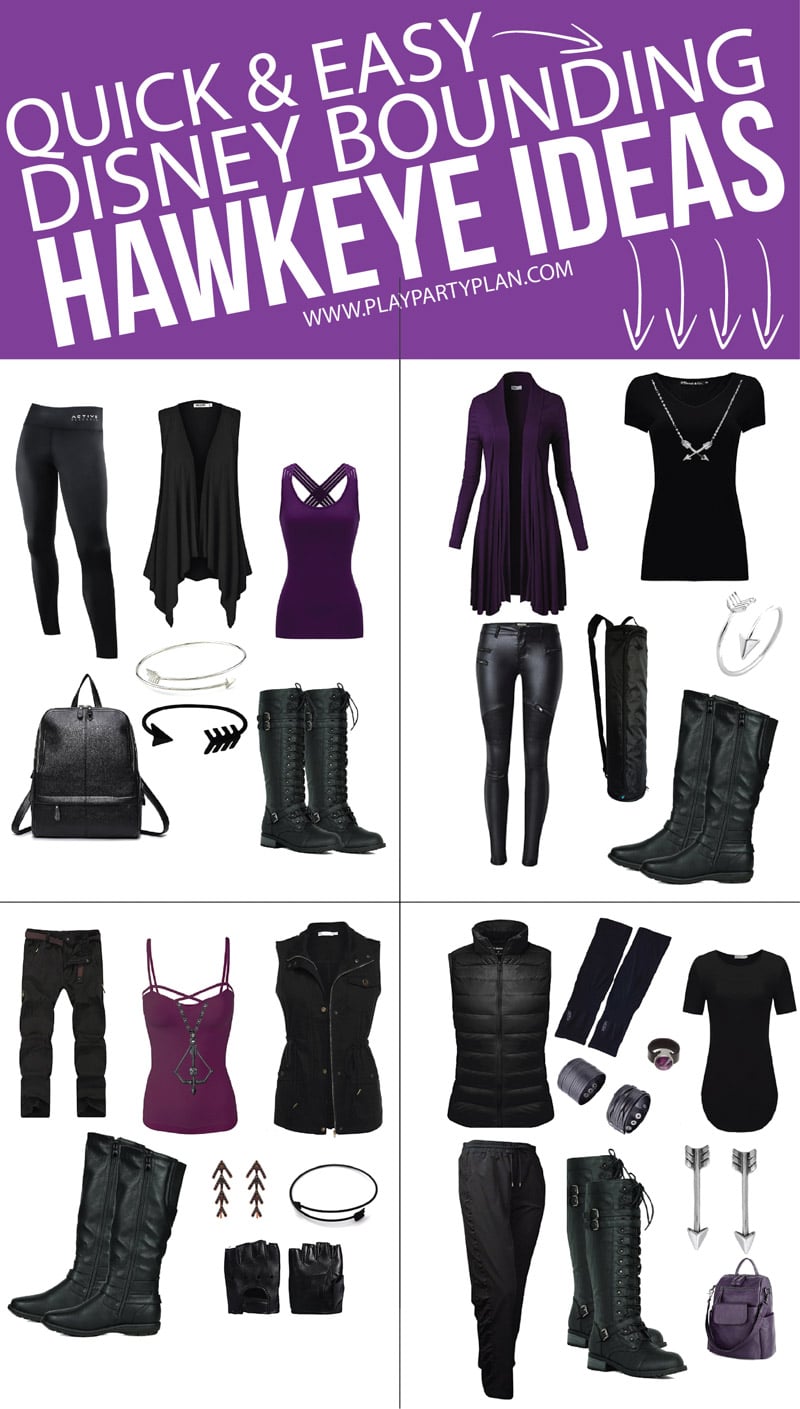 Looking for Disney bounding outfit ideas for Marvel’s Hawkeye? Look no further! Here are five easy to put together from your own closet ideas for to Disney bound Hawkeye! Great info on who is Hawkeye, the relationship between Hawkeye and Black Widow, and more too! 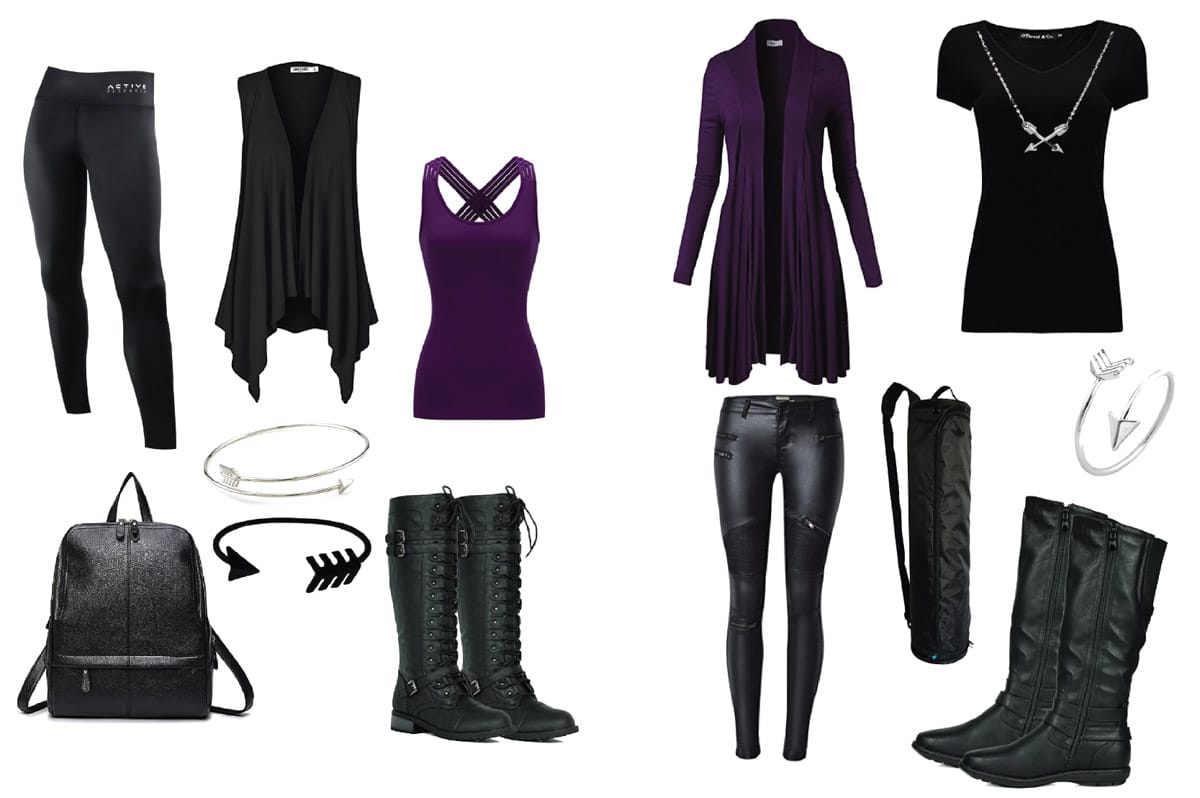 Talk Marvel to Me: Age of Ultron Week

Here for another edition of Talk Marvel to Me with my best Marvel-loving friends Tania, Patty, and Taty! This’s week edition is Avengers: Age of Ultron week! Taty is talking all about Vision and even gives you ideas for Disney Bounding as the visionary superhero! Tania is all about the costumes too and bringing to us an awesome Hulk costume from who knows what time she dressed up. She does it a lot. And Patty? Patty is all about Scarlet Witch this week.

And then there’s me. This week I get to talk about one of my all-time favorite Avengers – Hawkeye! And if you saw my Avengers Infinity War Trailer Reaction video or post, you know I’m still a little concerned that we’re not going to see Hawkeye in Infinity War, or at least not as we’ve already known it. I’m still not okay with that.

Hawkeye, also known as Clint Barton, is the marksman of the Avengers. In the MCU, Clint Barton is originally a former special agent of S.H.I.E.L.D who works closely with Clint Barton. That’s about all we see when we first meet Hawkeye very briefly in the movie Thor. We then see Hawkeye again in The Avengers, The Avengers: Age of Ultron, and Captain: America Civil War. When we last saw Hawkeye, he was actually locked up after fighting against Iron Man’s team in Civil War.

The Hawkeye actor is none other than Jeremy Renner. I’ll be honest, other than the Avengers movies, I’d never seen Jeremy Renner in anything before Thor. But he’s perfect as Hawkeye, seriously. And after watching this video of Jeremy Renner singing, you’ll fall in love with him too!

The next time we see Hawkeye is in The Avengers, and Hawkeye and Black Widow have a relationship that’s not really explained but that goes way back to when they worked together on secret missions across the world. You know they are best friends and have each other’s backs, but it’s never explained. Here’s what Scarlett Johansson and Jeremy Renner had to say about their relationship.

“Our characters have a long history. They’ve fought together for a long time in a lot of battles in many different countries. We’re the two members of this swinging group who are skilled warriors – we have no superpowers. Black Widow is definitely one of the team though. She’s not in the cast simply to be a romantic foil or eye candy. She’s there to fight, so I never felt like I was the only girl. We all have our various skills and it feels equal…We back one another. We’re on the same team.”

“It’s a lonely game. He’s an outcast. His only connection is to Scarlett’s character, Natasha. It’s like a left hand/right hand thing. They coexist, and you need them both, especially when it comes to physical mission.”

Now let’s talk about Avengers: Infinity War for a minute. Up until the very first Infinity War trailer dropped in the fall, everyone thought Hawkeye was going to be a big part of Avengers: Infinity War just like he has been in all of the other Avengers movies. I mean, he’s Hawkeye. He’s been there from the very beginning, even before The Avengers were formed. I mean he has to be in the film. You’d think right?

Hawkeye has intentionally been left out of all Infinity War promotion, merchandising, and even magazine covers. He’s done press but otherwise, he’s been out of all of it. Every time I see something new, I play the “Where’s Hawkeye” game, and so far nothing. Other than the Marvel 10 years photo shoot that included everyone, Hawkeye is nowhere to be found. He’s actually in this photo though! Have fun playing the game. 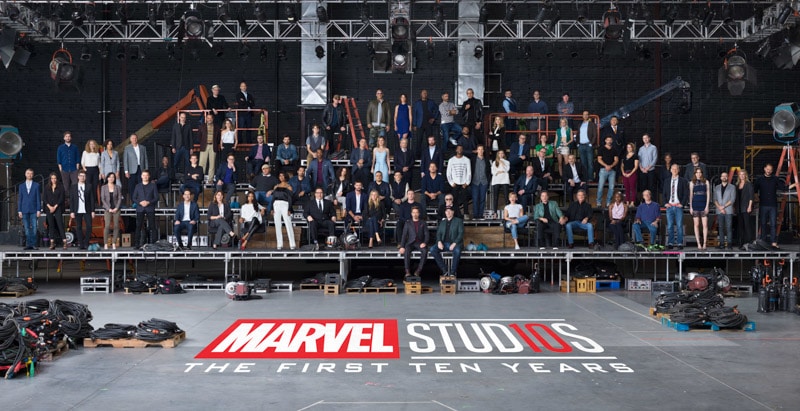 It’s such an obvious omission that you know Marvel has something big up their sleeve. There have been rumors and talks about what that is, but I won’t spoil it for anyone. I’m excited to be surprised just like everyone else when Infinity War opens on April 27th! Buy Infinity War tickets now if you haven’t already!

Why I Love Hawkeye

I didn’t realize until I was rewatching Avengers: Age of Ultron a few days ago how much I really like Hawkeye. He’s definitely near the top of my Avengers, following closely behind the Chris’. This might be a controversial one, but I think he’s super attractive. Not Chris Hemsworth attractive but still attractive. He’s the only Avenger who has a family, and I love a good family man. And he’s ridiculously loyal to his job. The scene in Age of Ultron where he talks to Scarlet Witch about this being a job is amazing. And I know it’s all fake, but I love how skilled he is with a bow. Weird right?

I also love his sarcasm, it’s more of a dry sarcasm than Thor’s humor, but he seems like someone I’d be able to have a good conversation with. And man can he sing!

First off, if you don’t know what Disney bounding is. It’s dressing up in regular everyday clothes inspired by your favorite characters. So it’s not dressing it’s costume, it’s just dressing like that character but using everyday clothes. Or that’s the short version of it at least. Disneybound has some incredible ideas for all Disney characters!

During the Disney Social Media Moms Celebration a few weeks ago, they asked us to Disney bound as a character inspired by Disney Cruise Line, and I immediately thought of Marvel because of the Marvel area on the Disney Wonder. Hawkeye is so easy to Disney bound because he mostly wears black with a pop of purple or dark burgundy. I couldn’t find anything in my closet last minute that worked but did come up with these great ideas for another day! Since his outfit is similar but a little different in each of the movies, I did a number of different looks. Let me know in the comments which one is your favorite!

If all else fails, just wear black, a little purple (or dark burgundy) and silver arrows of some sort! Oh and boots, always black boots. If there are two versions of the outfit, it’s because there are two (or more) main scenes in the movie where he’s wearing totally different things! 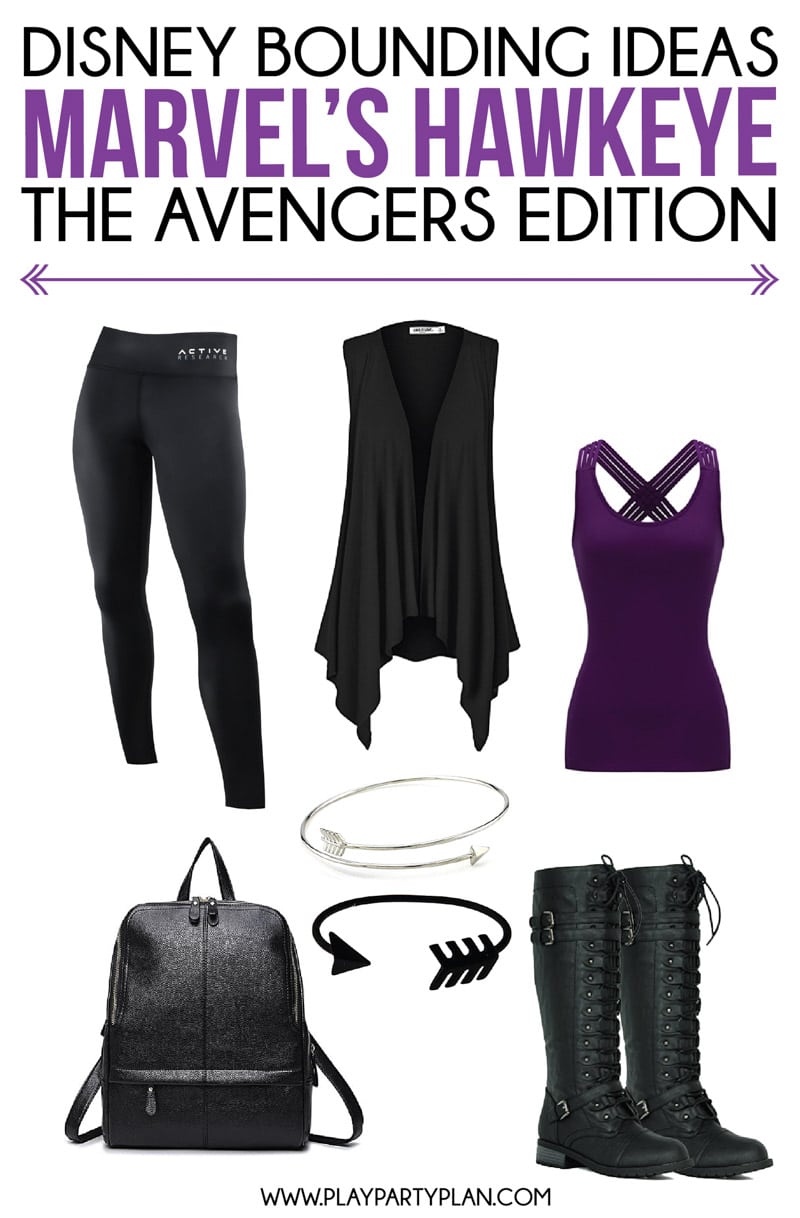 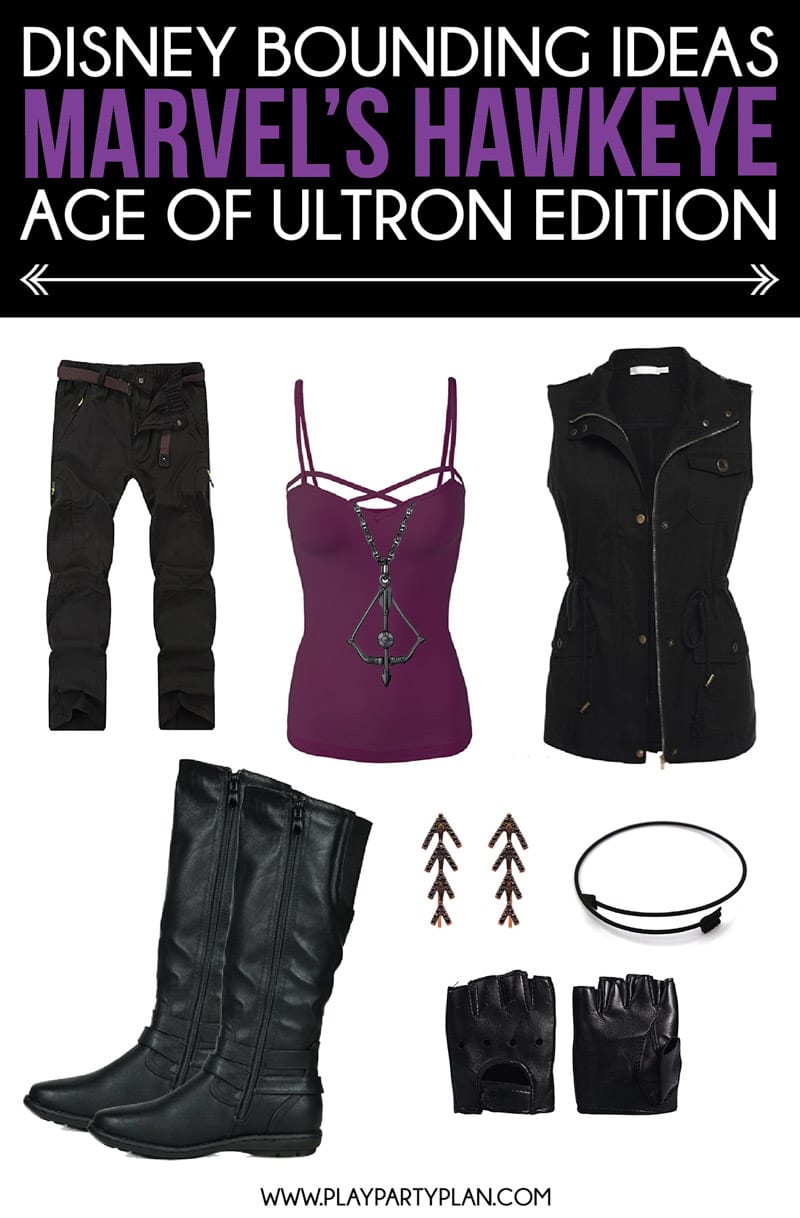 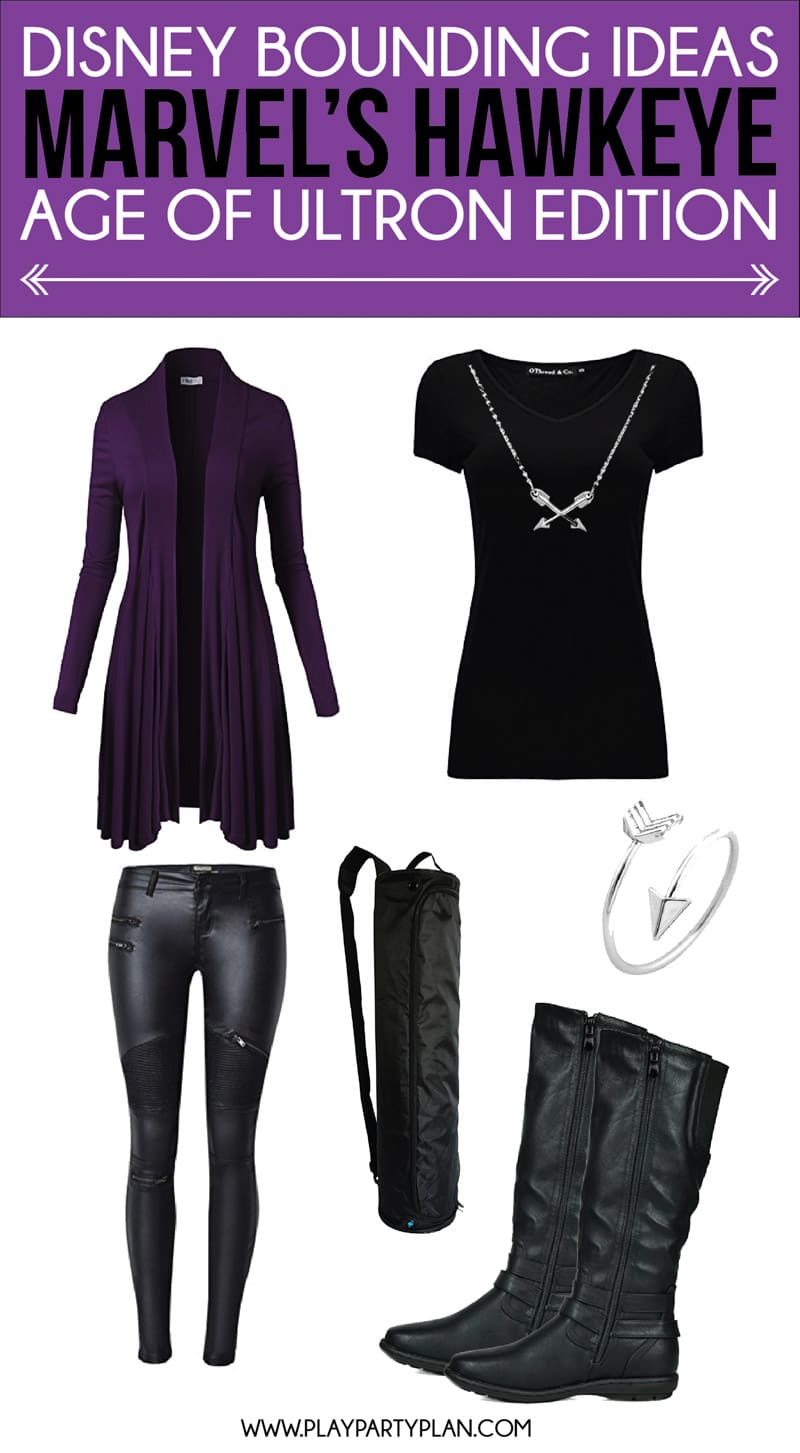 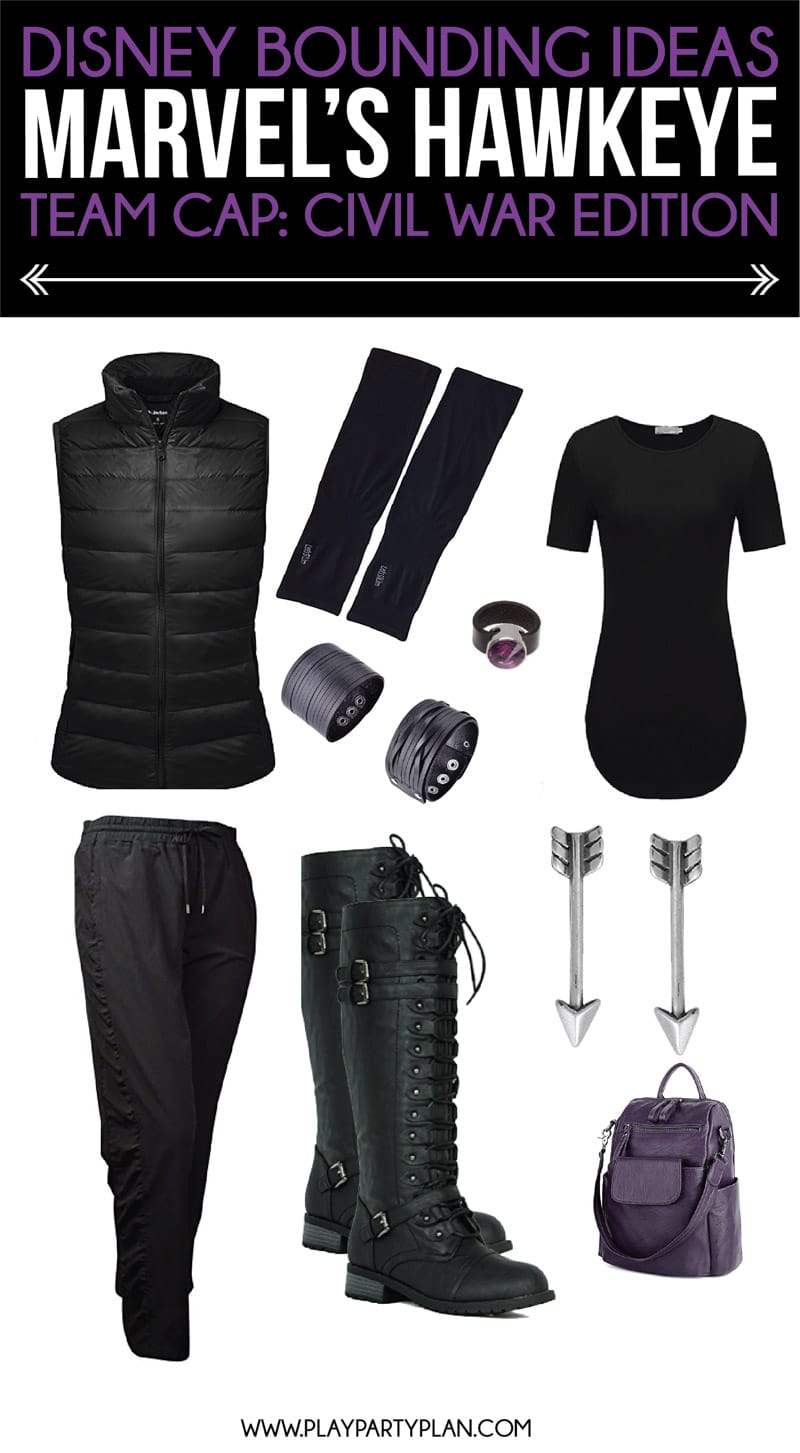 Don’t forget to pin all of these Hawkeye Disney bounding outfits for later!