Find out what Groupon Plus is, how you use it, and how it can help you save money on eating out whether it’s dessert or fine dining. Then discover how Groupon+ works in the real life as we search for the best frozen dessert places in Dallas! 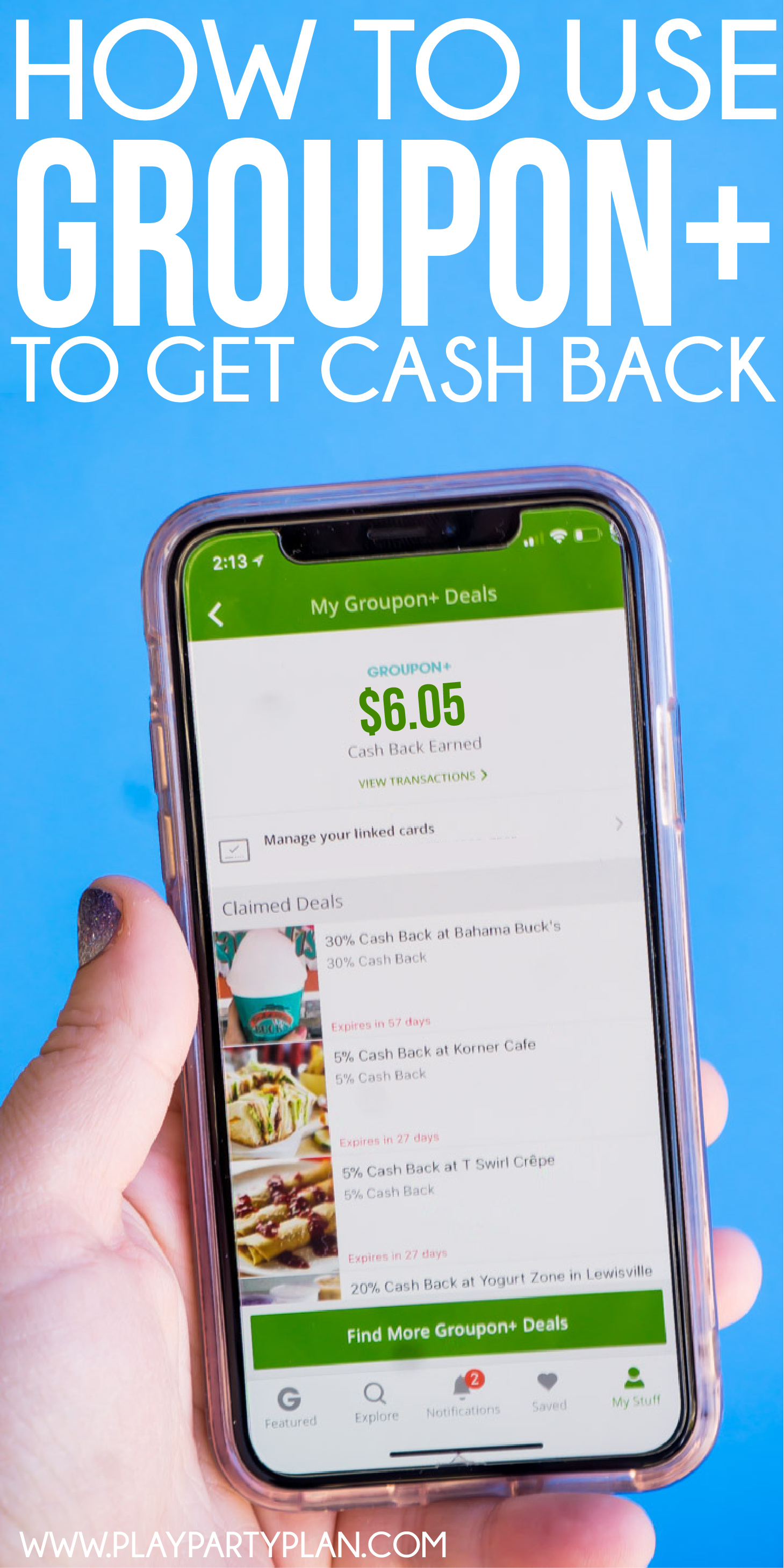 First off, let’s talk about Groupon+. Most people I know have either used a Groupon before or at least heard of Groupon if you haven’t used their services. Groupon+ is a new service that Groupon is offering. Groupon+ gives you up to 30% cash back on food and drinks purchased at participating restaurants with MasterCard or Visa credit cards linked to your Groupon account. It sounds simple, and that’s because it is.

Using Groupon+ is easy and it’s free, actually it’s better than free because you’re getting money back on things you would likely already be buying!

You’re now all signed up and ready to use Groupon+. While you’re at it, you might as well head over here to enter to win free meals at Groupon+ restaurants for an entire year! I mean getting cash back with Groupon+ is great but a year of free meals would be even better!

How Do I Use Groupon+?

After you’ve entered your credit card information and signed up, you’ll see a link to access all of the Groupon+ deals. Click on the link and you’ll see all Groupon+ deals in your area. If you’re on a computer, you can filter by type of restaurant in the left hand bar or just browse through all deals near you.

To access Groupon+ deals on desktop at another time (not immediately after registration), just click here and make sure you’re signed in. You’ll see the same link to access all of the  deals.

If you’re in the Groupon app on your phone, simply click on the “Groupon+ Restaurants” button that shows up in the top toolbar of the app home screen. This will take you directly to the list of all Groupon+ restaurants in your area.

Search the Groupon+ list for any of the thousands of participating restaurants near you that might be a good fit and once you’ve found a restaurant you like, click the green claim button on the deal. This will automatically add the deal to your account, totally free!

All you have to do to take advantage of the cash back deal is eat at that restaurant and pay with one of the linked credit cards on your account. No vouchers, nothing to print out, nothing to show at the restaurant – you’ll just receive a money back refund directly on your credit card statement.

So for instance, if you claimed the deal above and your bill was $100 for dinner, you would receive a $20 cash back credit on your credit card statement. Guys, that’s like someone just handing you a $20 bill for no reason other than eating at a particular restaurant. And there’s no limit to the amount the bills can be, just a limit of $150 on

the amount of cash back you can get (for fraud purposes). If you spent $500 on that same dinner, you’d get a credit for $100. I’m not sure it gets any better than that.

As an added bonus, if you go back to that same restaurant, you’ll continue getting cash back every time you visit without having to claim the deal again. Make sure to check the fine print on the page when you claim a deal because some of the deals go down in percentage on subsequent visits. For example, my Groupon+ at Bahama Buck’s is good for 30% off the first visit and only 10% on any additional visits while the deal is valid.

There is none. Claim deals for free, eat at participating restaurants with an eligible MasterCard or Visa card, and get money back on your credit card statement. That’s it. No catches, no fine print (other than on subsequent visits), and nothing for you to be concerned about except how you’re going to spend all of that money you get back.

Not a catch but just a note, Groupon plus cash back is only good on the total bill before tip, it does not include tip. The full tip will still go to your server!

Since I never write about anything that I personally have not tried myself, I decided to test out Groupon+ in my area this past week to see if it really is as good as it sounds. I’m a big frozen dessert person, so I went out on a mission to try out as many frozen desserts as I could in my area using Groupon+. I’ll do anything in the name of research.

One of my favorite features of the Groupon app is that ability to search for Groupon+ deals by distance from you. I did a quick search on the app and found a handful of places in the area that were serving unique types of frozen desserts – organic ice cream, frozen yogurt, shaved ice, Japanese crepes, and marble slab ice cream with hand dipped cones. Score! I claimed all of the Groupon+ deals to my account and went off in search of the best frozen dessert places in Dallas!

You could also use Groupon+ to find awesome things to do in Galveston!

The first place I stopped was Sukoon Coffee and Ice Cream because they promote all natural organic ice cream. We’ve been on an all natural kick since we did Whole 30 last summer, so I was excited to see if the organic homemade ice cream tasted as good as it sounds. They also offer organic coffee, but I’m an ice cream person, not a coffee one.

It was. And the process for claiming my Groupon+ deal was just as fantastic because there was no process at all. I walked up to the ice cream counter, ordered my ice cream, paid with my linked credit card, and walked out with my ice cream. No remembering to print out a voucher from home or even having to show them my Groupon account, it was just like if I’d walked in without any deal at all. My $4.63 ice cream bill will net me a credit card statement credit of $1.39 with the 30% off Groupon+ deal I claimed! 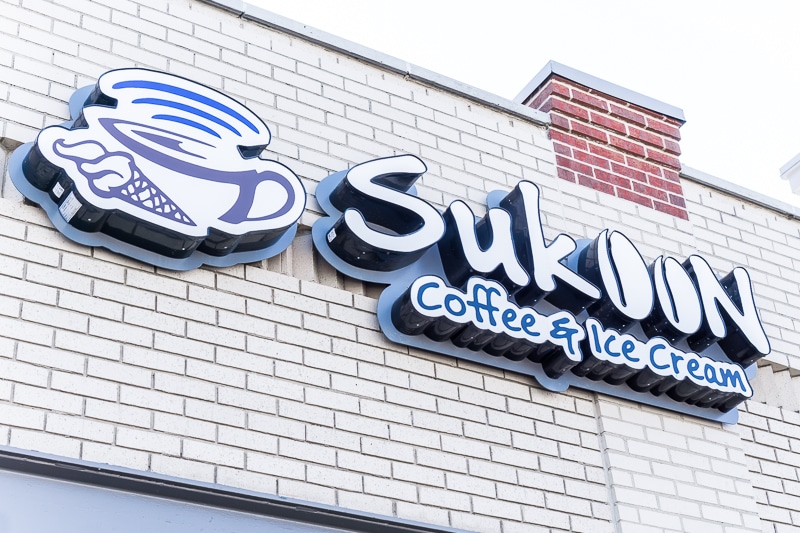 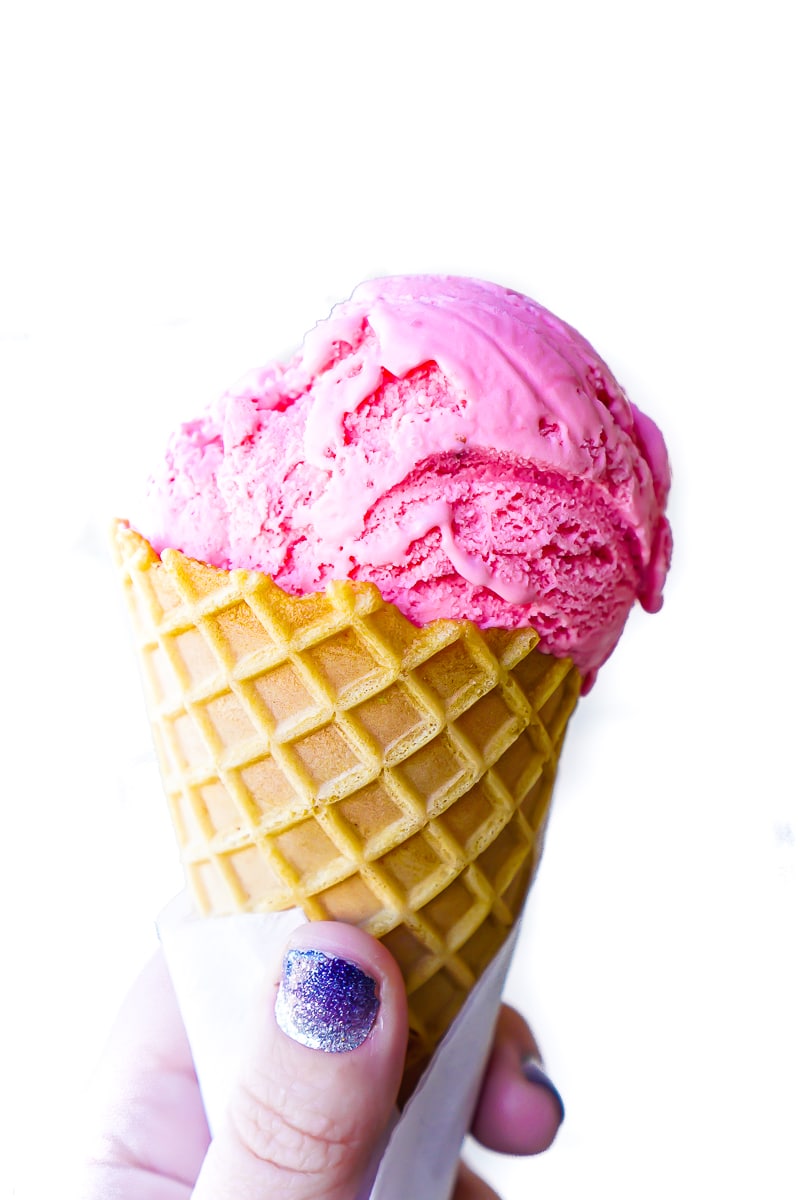 Yogurtzone is a build your own frozen yogurt place like the ones that have been popping up around the country. They have a number of unique flavors like taro and fresh mango and with my Groupon+ deal giving me 20% back, I loaded up my pay per weight frozen yogurt cup with more yogurt and toppings than I normally do. I was feeling so optimistic about all the money I was saving, I even added a cherry on top! 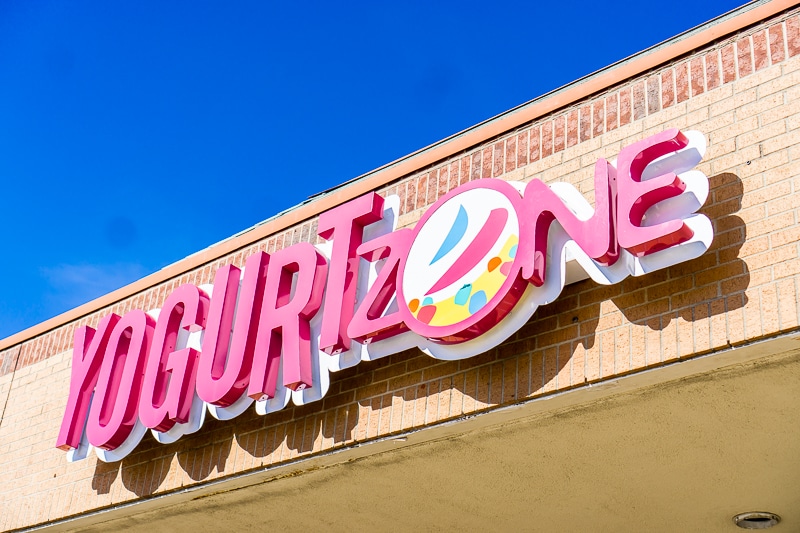 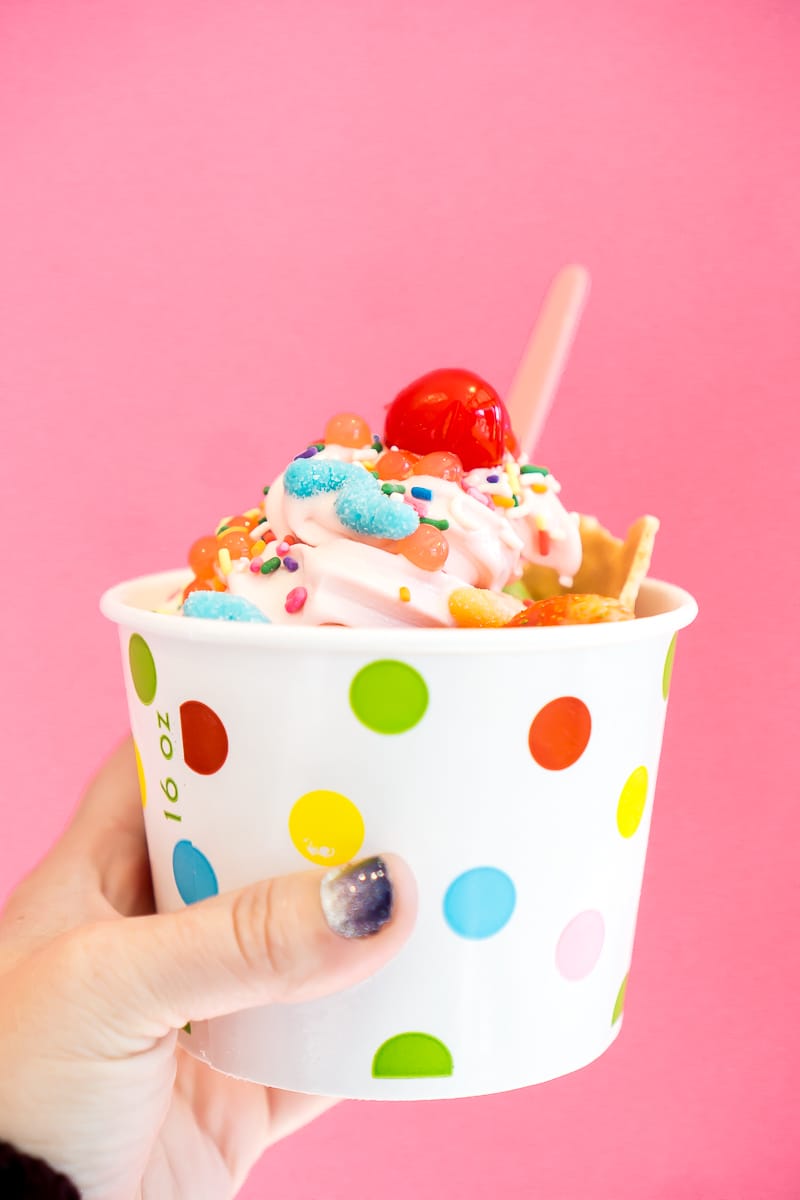 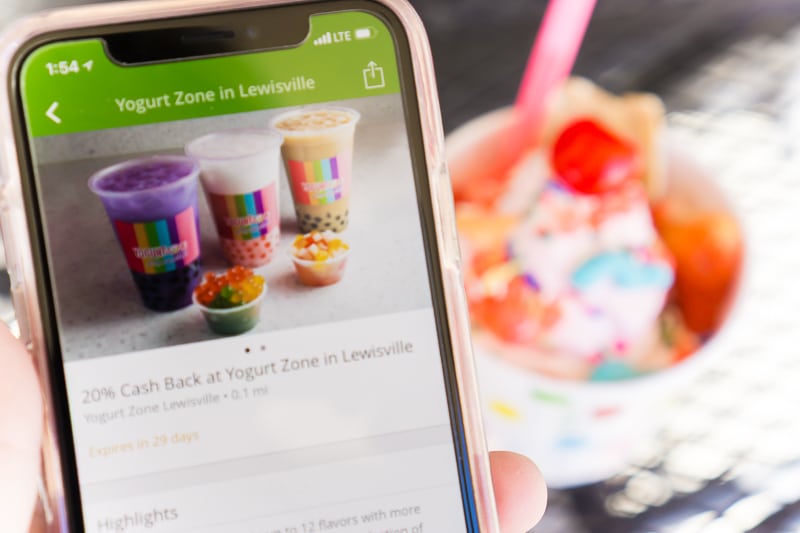 There are various locations of Bahama Bucks all over the DFW area including a number of locations that offer Groupon+ deals. Bahama Bucks serves gourmet shaved ice in way too many flavors too count and in options that include whipped cream on top, smoothies, and more. I asked for the brightest color they had, which happened to be a delicious sour lemonade in neon pink. And I saved 30% on that neon pink shaved ice thanks to Groupon+!

The coolest thing about the Lewisville location is that they have an indoor area and an outdoor area that has games you can play including a tetherball pole in the field across the street complete with bleachers. Grab your shaved ice and settle in for a competitive afternoon of tetherball. 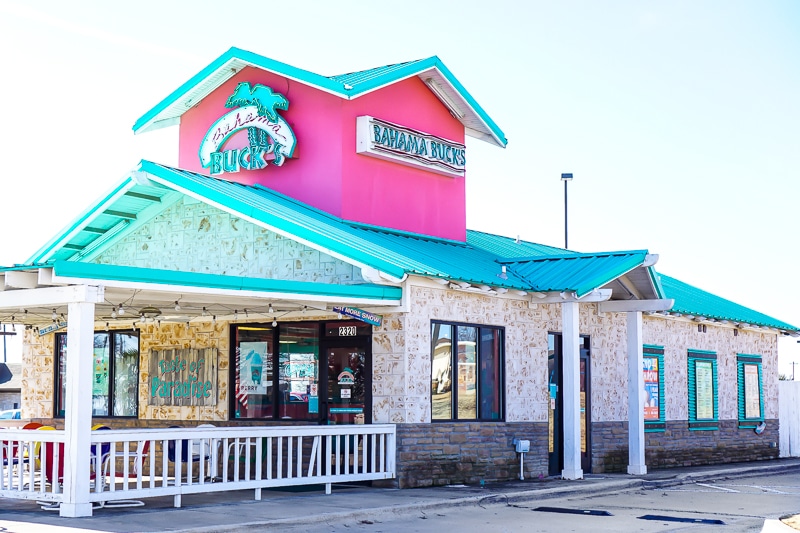 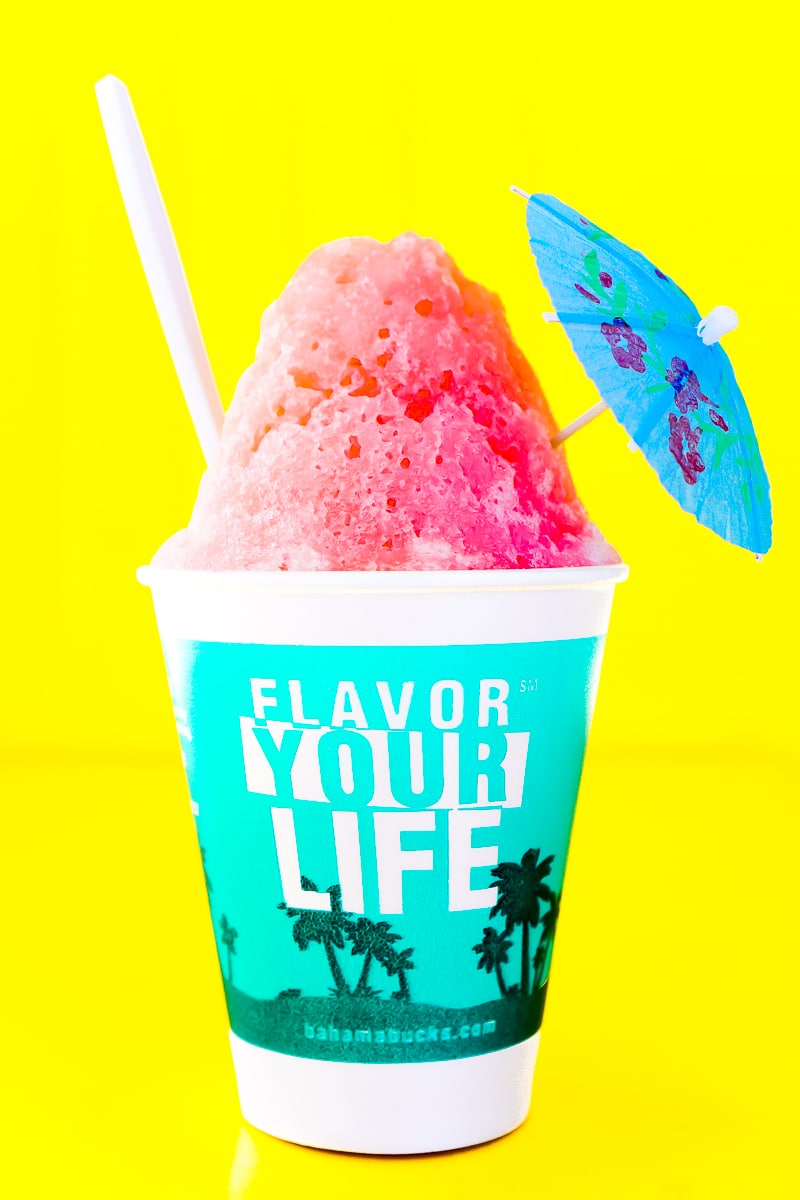 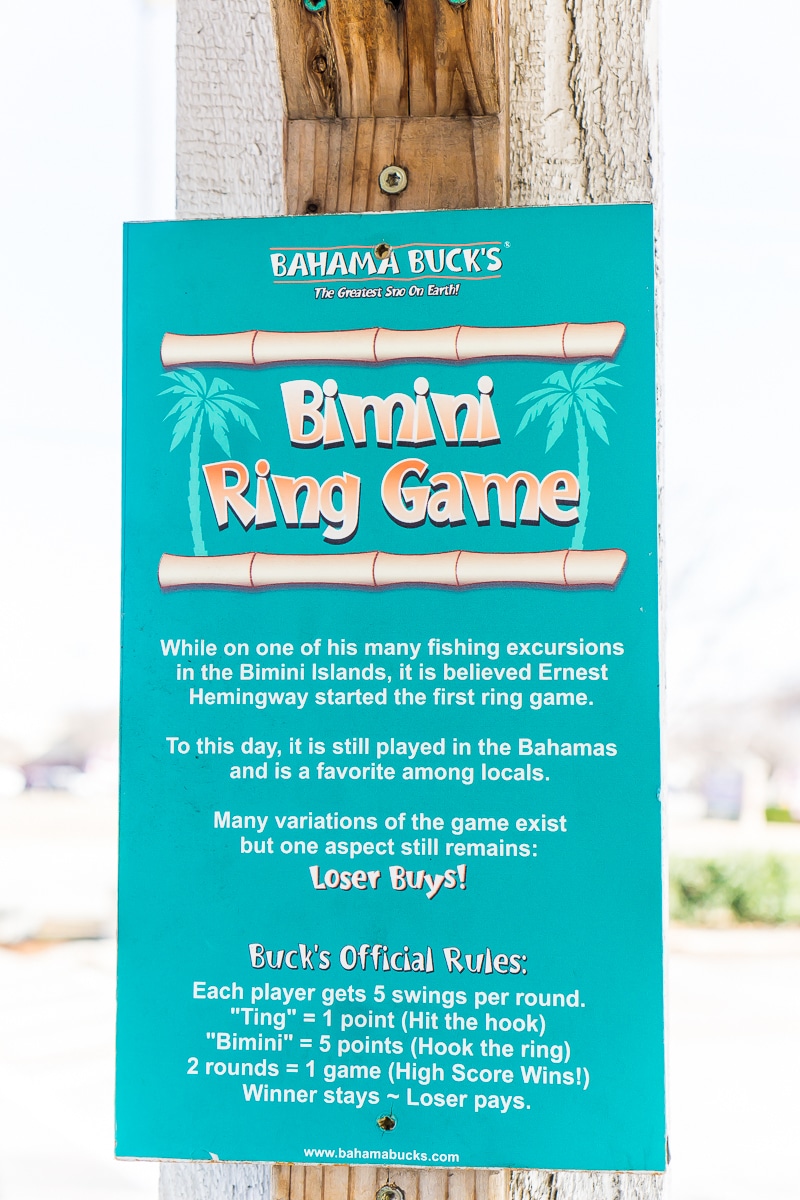 T-Swirl doesn’t serve your typical crepes. They serve rice flour crepes filled with fruits, sweets, and ice cream in a variety of flavors. They wrap those toppings up tight and serve them in a cone shaped crepe.

They only use the best all-natural ingredients and the flavors are amazing. And if you’re craving something other than a sweet crepe, they also offer savory crepes of all kinds. Eat an entire meal here finished off with a crepe for dessert then make it even sweeter when you get your Groupon+ cash back! 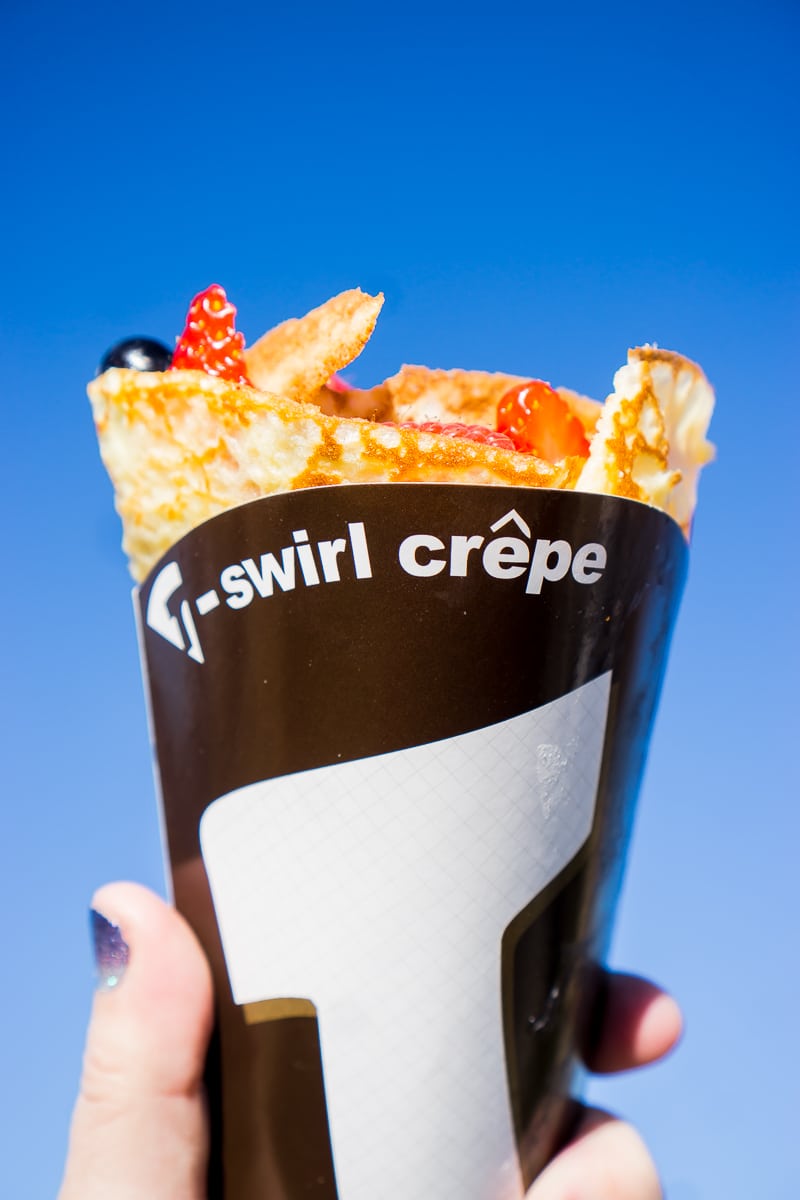 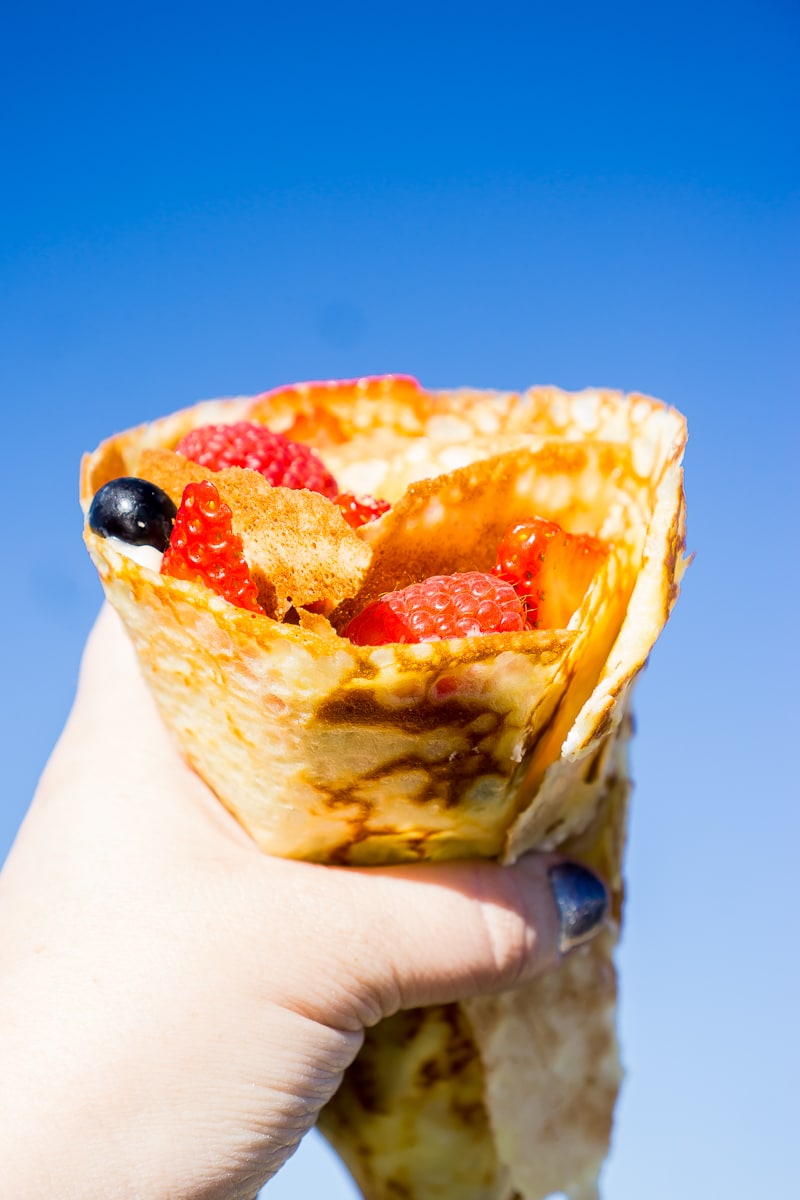 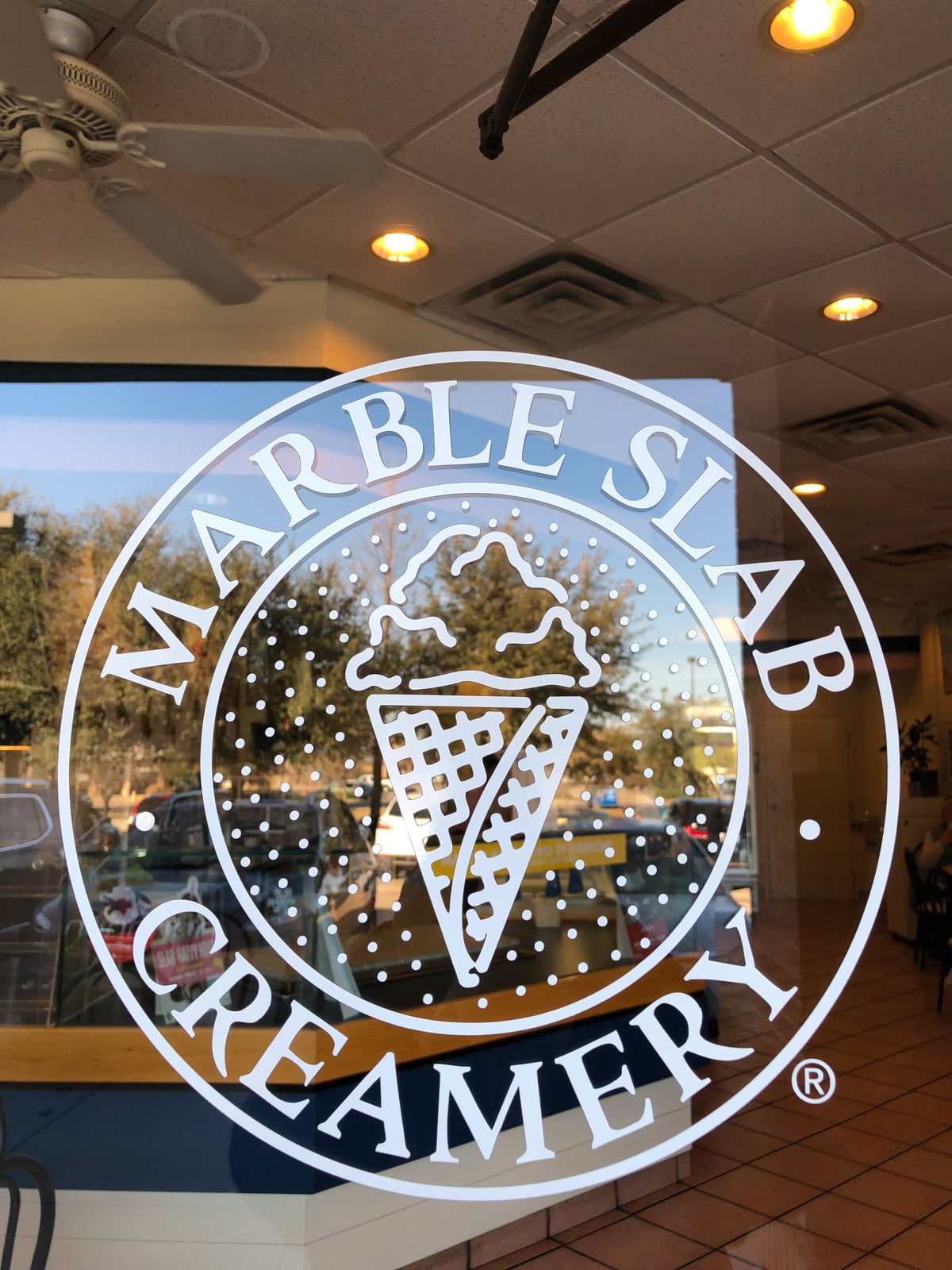 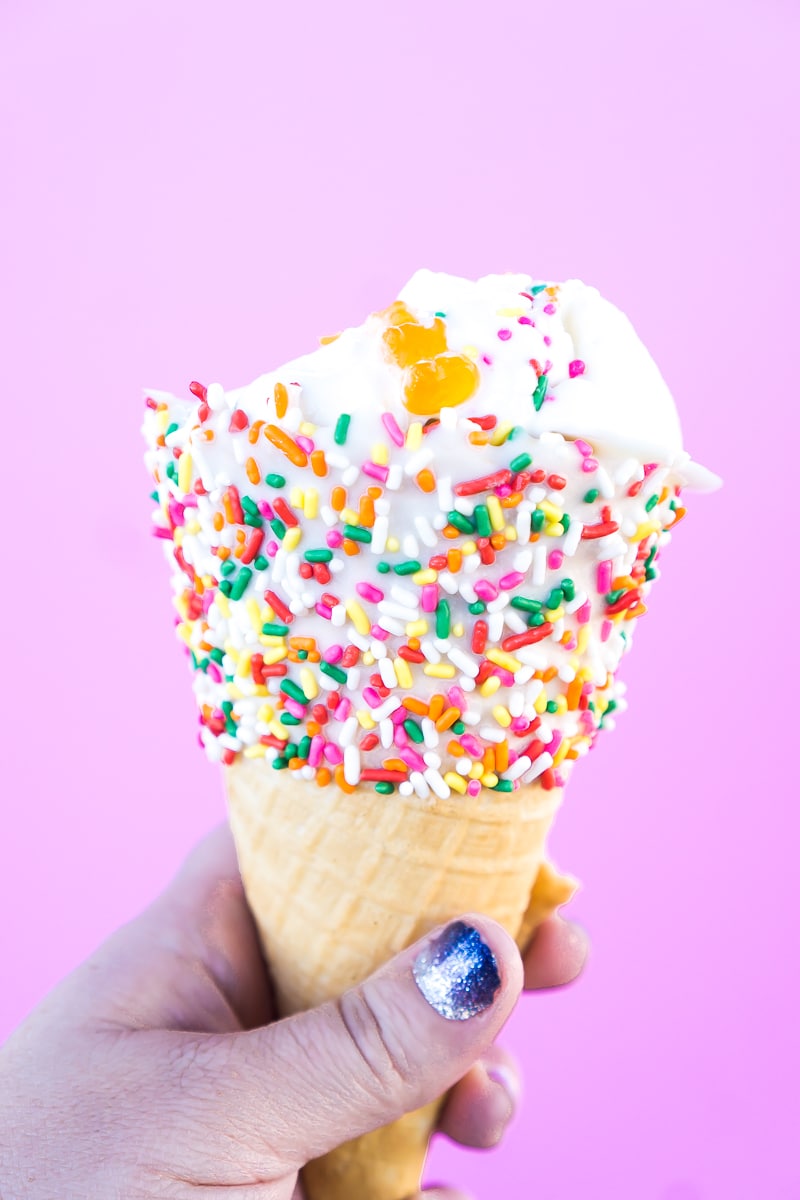 Eating at five different frozen dessert places in Dallas isn’t abnormal for me. What is abnormal is that I ate at most of them by myself because I went during work hours, normally I’d have my family or friends with me. So keep that in mind as you’re looking through the amount of money I received back using Groupon+ deals. If I’d been with family or friends, this amount would likely have been multiplied by 3-4 times.

If you like to eat out, Groupon+ is a fantastic way to save money. If you don’t eat out now because it’s too expensive, Groupon+ might make it reasonable enough that you’ll be able to eat out every once in a while. All I know is that the service seems too good to be true except in this case, it’s not. It’s real and it’s awesome. Sign up here to get started then head over here to enter to win meals for an entire year at Groupon+ restaurants!

Don’t forget to pin these Dallas dessert restaurants for later!