Trying to figure out how to get RSVPs back? These 10 tips and tricks to get RSVPs will help get even the laziest person to make that call. 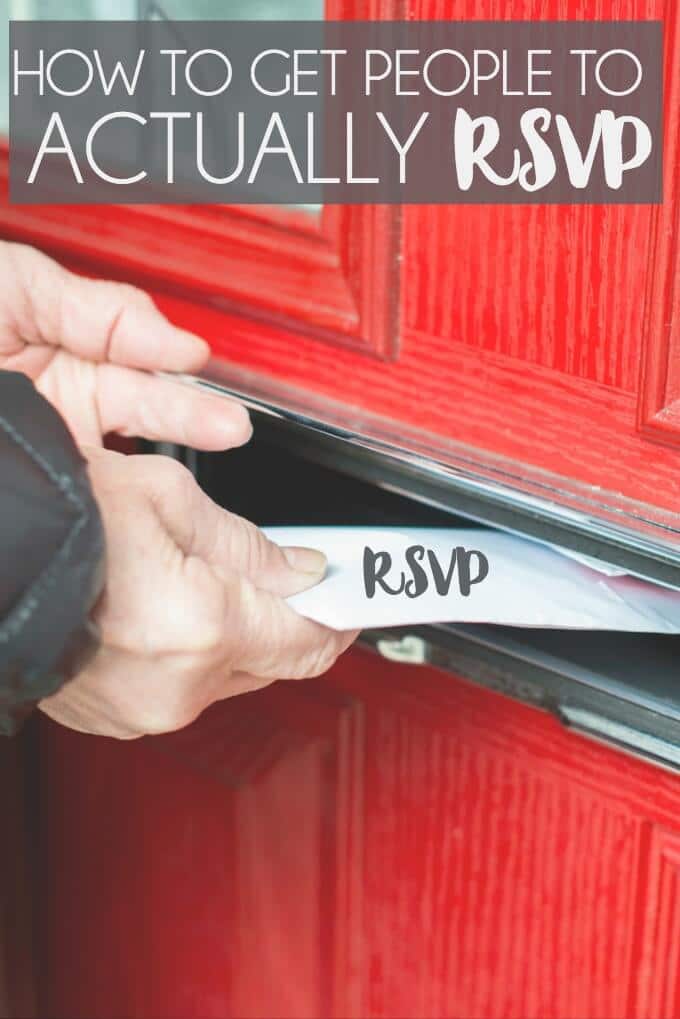 A couple of weeks ago I asked on my Facebook page for my readers to tell me what the most annoying thing about planning a party is. I love hosting parties obviously and wanted to see what I could do to help people enjoy them as much as I do. The answer surprised me, well sort of. It’s not the answer I would’ve thought of right away but after 75% of people answered with it, it really did make sense.

You know what that problem was? Getting people to RSVP.

My schedule changes on a daily basis, so I typically end up being one of those people who doesn’t RSVP until the very last minute when I know one way or another if I can for sure make it. Now that I know it’s one of the most frustrating things about planning a party, I’m gonna be better about it.

I asked around to some of my friends who host often as well as some of my party planning friends and came up with this list of 10 great ideas to make getting people to RSVP easier. I wouldn’t recommend doing them ALL or else you may never have people come to your parties again because they’re sick of you nagging them, but try out a couple and see what works for you. Different people are motivated by different things.

And if people STILL don’t RSVP to your party, don’t invite them next time. When they realize that they missed out on an awesome party and you mention it was because they didn’t RSVP to the last one so you weren’t sure if they would be able to make this one, they’ll get the picture.

How to Get RSVPs Back

#1 – Make it simple.
This is my #1 tip. Make it simple for someone to RSVP. Send invites electronically that have a place online where they can RSVP. I hate the phone, so I’m one of those people who won’t ever call and RSVP. A text maybe, but I’m never making that phone call. If I can do it electronically, I’m 90% more likely to RSVP. Oh and with a program like Evite, you can see if people have opened the invitation. If they didn’t even open it, it’s probably a pretty good guess that they’re not coming.

#2 – Double Up.
This is probably blasphemous from a party girl to say, but either skip the paper invitation or send both a paper and an electronic copy of the invitation (with an electronic link to RSVP) if you have a super cute invitation idea you want to use. And for all means, if you don’t have problems getting RSVPs, go cute paper invitations all the way. I’ll send out paper invites well in advance of the party and then a week or two before the party I’ll either send out an actual electronic invitation or just send a follow-up email that says something like, “Hey I hope you received the invitation to such and such event, I hope you can make it! If you haven’t already RSVPed, you can respond to this email and let me know if you’re coming or not.” It’s also a great way to make sure that paper invitations weren’t lost in the mail. Heaven forbid your kid’s best friend didn’t get the paper invite and doesn’t make it to the party because they never got an invitation.

#3 – Provide party favors.
Okay, you’re probably asking what does this have to do with people RSVPing to my party? Here’s the deal. If you provide some sort of take home or party favor at every party, next time you plan a party, you can say please let me know if you’re coming so that I can make sure I have enough favors for everyone. If people know that you give out awesome take home gifts, they’re going to RSVP to make sure they get one. Like for my son’s 1st birthday party, I bought everyone copies of the books it was themed after and made sure that people knew I was only going to buy enough for people who told me they were coming. If someone comes to a party that doesn’t RSVP and their kid misses out on that awesome coloring book the other kids get, guess what, that person is going to remember next time.

These are some of the best party favors I’ve ever given out or received:

#4 – Get a friend to help.
I always tell people to ask for help with parties. Assign one of your friends who knows a lot of your guests to be on RSVP duty. It doesn’t have to be forced or nagging, just give them the guest list and have them casually bring up the party with people who haven’t RSVPed yet. Ask if they’re coming to the party and if they say they are, have them mention that you (as in the party host) weren’t sure and that they should let you know. Or your RSVP friend can report back and let you know if they’re for sure.

#5 – Do a Raffle RSVP.
You can do this one of two ways. Add a note on your invitation (if it’s not tacky) that any one who RSVPs by a certain date will be entered into a raffle for a fun prize at the party. Or forget the invitation and when you’re having the party, put anyone’s names in the hat who did RSVP and pick a winner. It doesn’t have to be a big prize, people just like to win things. Enough that it may get them to click that link and say yeah, I’m gonna be there. You could even make the gift funny like these ones associated with RSVP.

#7 – RSVP Regrets Only.
Some people like to put regrets only RSVP on their invites, which is basically saying that if you’re not coming to my party, tell me. Hopefully there will be less people not coming, so less people to worry about calling.

#8 – Follow-Up.
If you’re inviting good friends, just send them a quick text or email and ask point blank if they’re planning on coming. If it’s kids whose parents you don’t know particularly well or someone else’s friend (e.g., for a baby shower you’re hosting), send an email and just mention that you’re really excited to see them and hope they can make it. Be polite and don’t nag, just encourage them to let you know if they’re coming.

#9 – Make the party unmissable.
When you’re thinking about your invitations, think about making them an awesome teaser for your party. Even if they’re electronic, make the description of what you’re doing sound like something people don’t want to miss. Like my friend Amy recently planned an Indiana Jones party and delivered the most amazing invitations to the boys. I think some of the main reasons that people don’t RSVP is because they aren’t sure if they can come/might have a conflict, are waiting to see if something better comes along, or really just not sold on the idea. If you make the party seem unmissable, I bet they’ll clear their calendar and tell you they’re coming so they don’t miss out.

#10 – Plan for more.
Even with all of the tips above, you’re going to have people who show up and don’t RSVP. There’s just always going to be people out there like that. I recommend planning for a few more people than RSVP because a couple extras will show up and a couple who RSVP will cancel last-minute or just be no-shows. It’s just how it goes. If you’re trying out #3, have a couple of extra party favors for people who last minute told you that they could make it but if they show up without telling you at all, it’s okay to say I only bought enough for the people who said they were coming. Maybe just don’t do that with someone like your husband’s boss.

The Indispensable Guide to Planning a Party
Party Planning Help
The Party Planner
Party at Home on a Shoestring Budget
Party Girl – okay this isn’t a party planning book, but a fun read