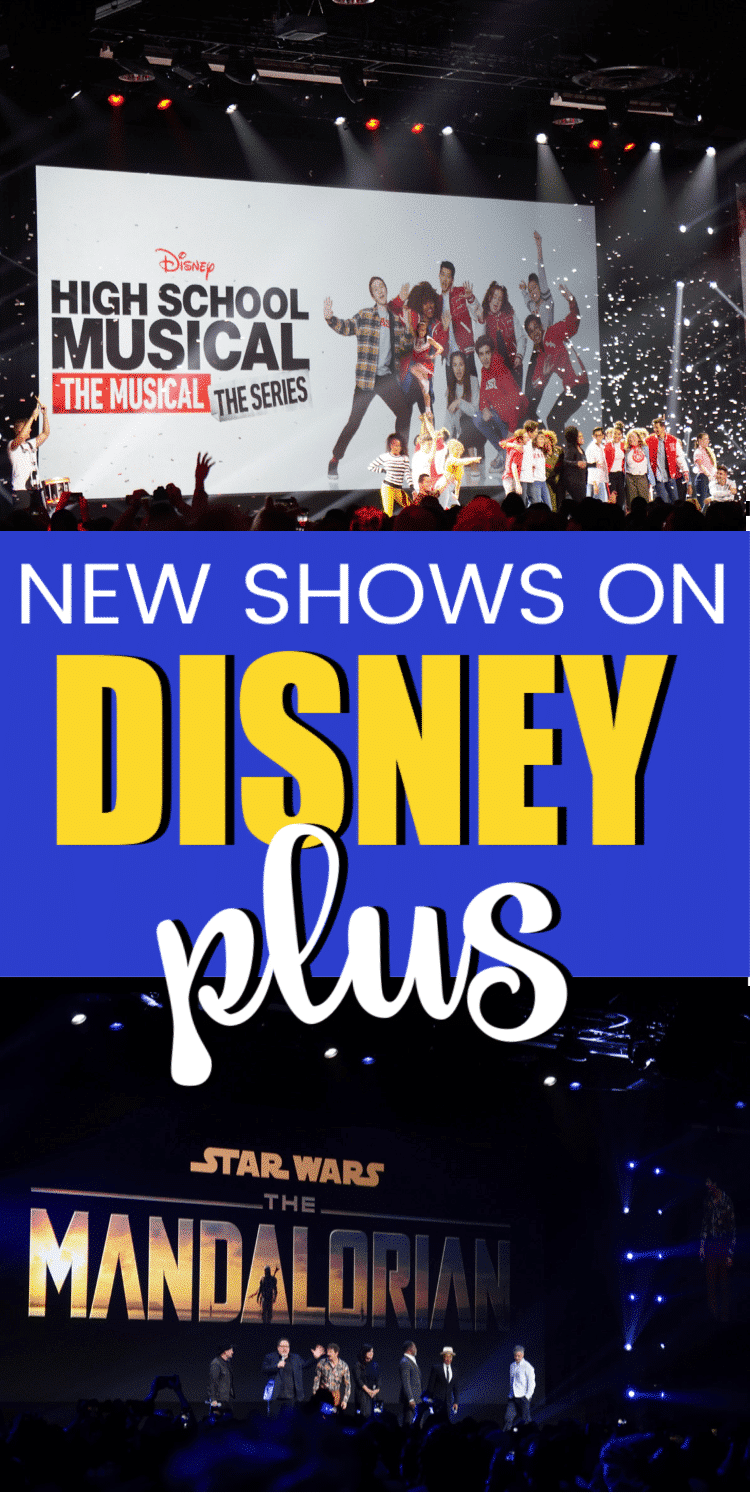 If you’ve been on the fence about signing up for Disney Plus, the news announced at the D23 Expo Disney Plus panel today will probably change your mind. So many amazing shows, movies, and original series coming to Disney Plus in the next two years!

I just wrapped up day 1 at the D23 Expo in Anaheim California and my head is spinning with the news that just came out of this afternoon’s Disney Plus presentation. Huge news for the Marvel Cinematic Universe, Star Wars Universe, and even some fun news from Disney and Pixar! 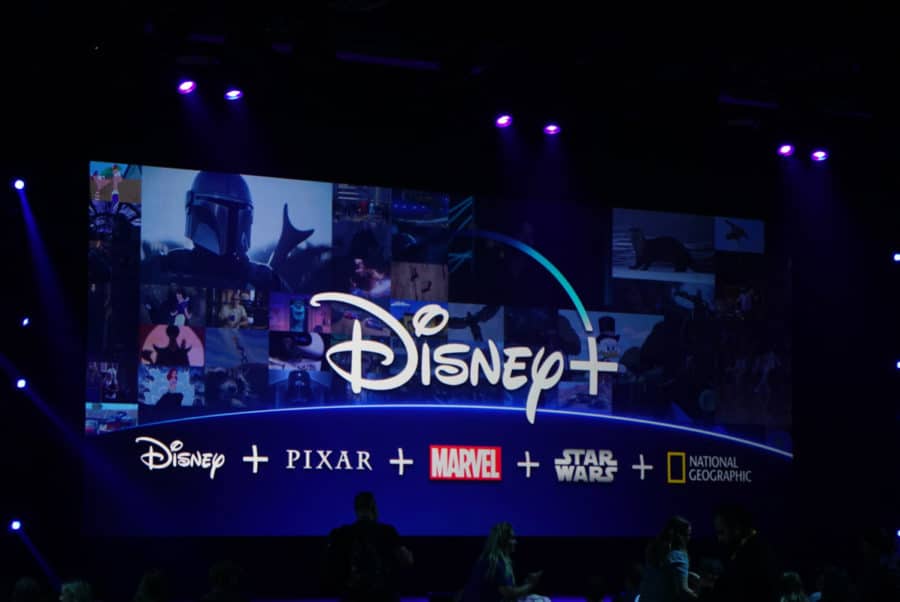 I received a media pass to attend the D23 Expo. All opinions are honest and 100% my own. This post contains affiliate links.

Keep reading to see all the exclusive content that will be coming to Disney Plus including exclusive new content just announced during today’s Disney Plus D23 Expo panel!

Marvel Shows on Disney Plus

If you’ve been following along with the Disney Plus news at all this year, you’ll probably know that there are new original Marvel shows in the works for Disney Plus.

A number of them were confirmed at Comic-Con in July and today MCU mastermind and producer Kevin Feige gave us more details on those shows AND ANNOUNCED THREE BRAND NEW MARVEL SHOWS COMING TO DISNEY PLUS!

Seriously, the panel was insane. 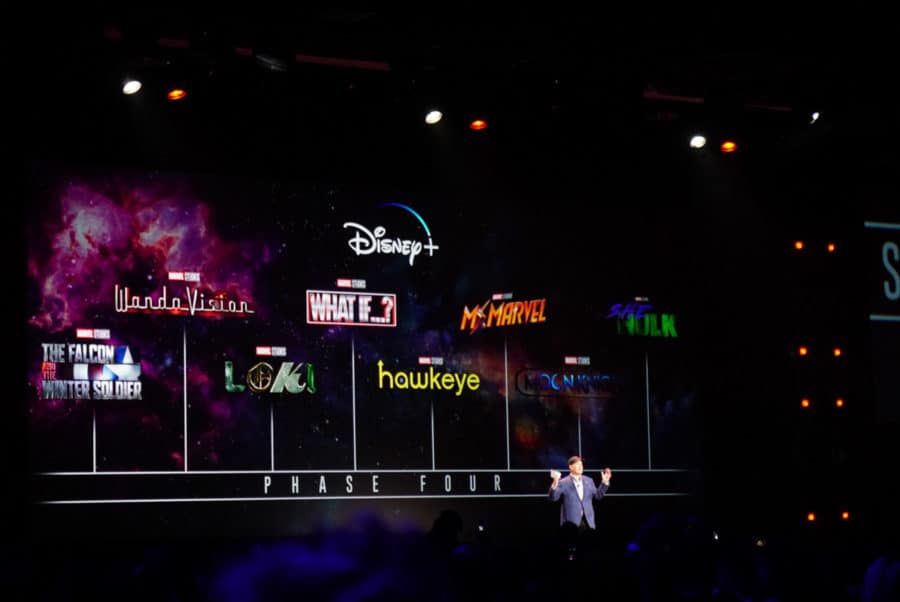 Hawkeye on Disney Plus

Out of all of the shows, we got nothing out of Hawkeye, which was sad because I was totally Disney bounding Hawkeye today! The only tidbit they told us about Kim Bishop joining Hawkeye was something announced a while ago.

Loki on Disney Plus

Just a few details about the brand new Loki show. It’ll be six hours and supposed to answer our burning questions about things like what happened to Loki when he took the tesseract in Avengers: Endgame. Coming to DisneyPlus in 2021.

WandaVision on Disney Plus

This is the show that so far I’m the most intrigued by. Elizabeth Olsen and Paul Bettany reprise their roles as Scarlet Witch (Wanda) and Vision from the MCU in this new Disney Plus original series.

They showed us a “tone teaser” sneak peek that was a combination of Dick Van Dyke black and white sitcom scenes and Wanda and Vision scenes from MCU movies. The team behind the show confirmed that they’re not sure quite how it’s going to work yet, but the show will be half classic sitcom, half epic MCU adventure.

Joining the two name characters are Kat Dennings as Darcy Lewis from Thor 1 and 2, Randall Clark as Agent Jimmy Woo from Ant-Man. And Kathryn Hahn will be a new character in the series. 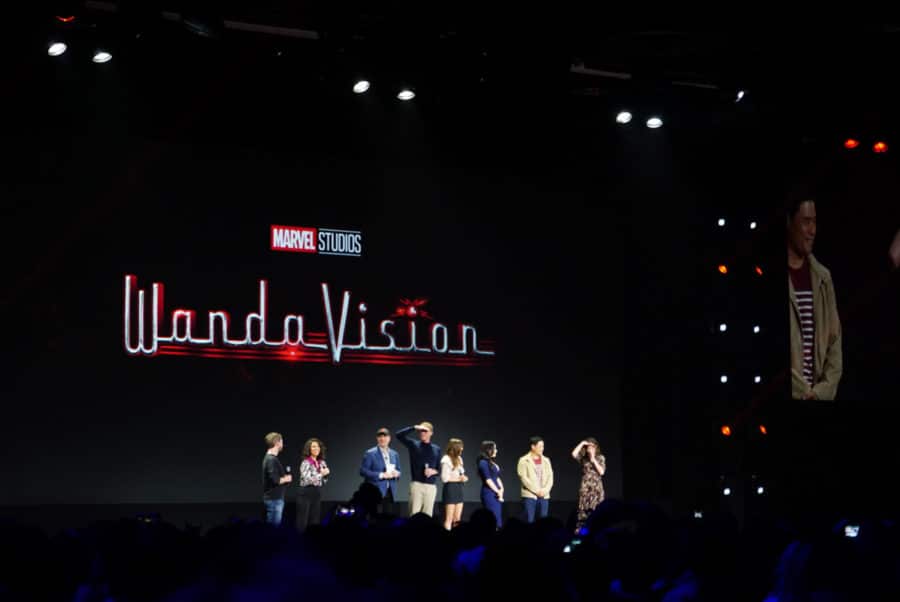 Falcon + Winter Soldier on Disney Plus

They also gave us a few more details on the original series the Falcon and the Winter Soldier. The show apparently will be the telling of both Falcon and Winter Soldier’s stories post Avengers: Endgame.

And both San Sebastian and Anthony Mackie showed up on stage! Also announced was that Emily VanCamp will be joining the show as Sharon Carter and Wyatt Russell will be joining as John Walker. This show ill be on Disney Plus in 2020. 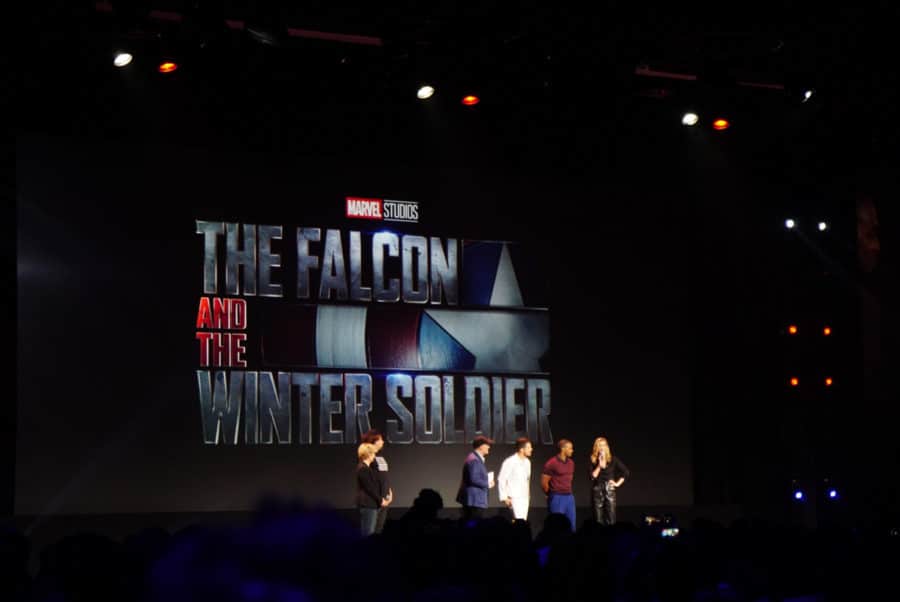 What If? on Disney Plus

What If? will be an animated Marvel series on Disney Plus inspired by a comic book story that basically asks what if you change just one thing – what happens to the story.

There will be 23 episodes, one for each of the movies in the MCU, that changes just one thing and retells the story with what might have happened if that one thing changed. Almost all of the main actors from the MCU will be voicing their original characters in the series!

They showed us a quick teaser for one episode and it appears that the story is asking “what if Peggy Carter” became a super soldier instead of Steve Rogers and we ended up with a Captain Britain instead of Captain America?

Super cool concept, and I’m excited to see where this one goes. Coming to Disney in 2021. 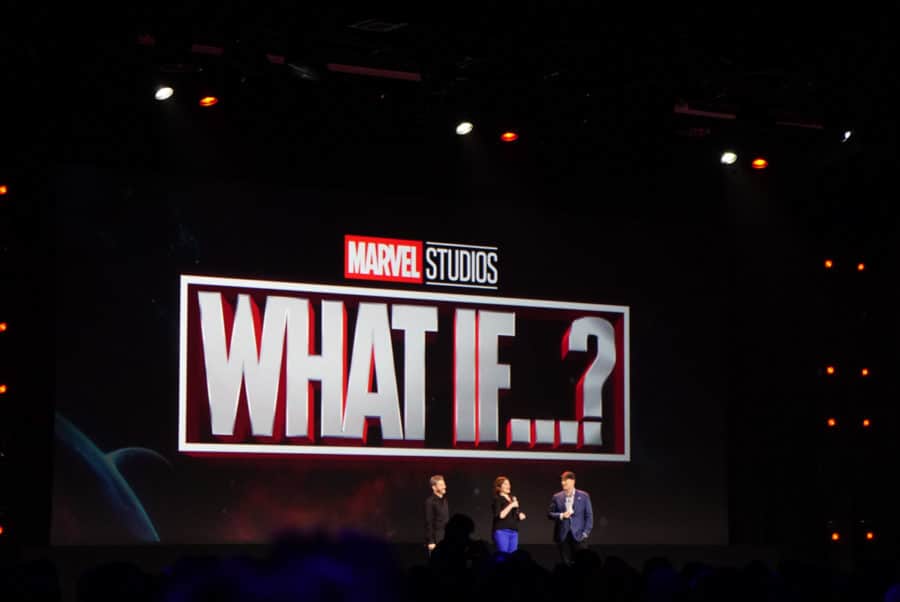 And then Kevin Feige made the big announcement – three brand new original Marvel TV shows coming to Disney Plus.

Which Marvel TV series on Disney Plus are you most excited to see??

Star Wars Shows on Disney Plus

Kathleen Kennedy got on stage to make four big Star Wars announcements including one that fans have been asking about for four years. And I believe it because it was totally one of the questions asked during this Christopher Robin interview I was at last year!

Fans apparently loved this show and their voices have been heard. Clone Wars will be getting a reboot and hitting Disney Plus in February 2020.

No name announced yet but this show will feature a 2-man spy team – Diego Luna and Alan Ludyk reprising their roles in Rogue One. 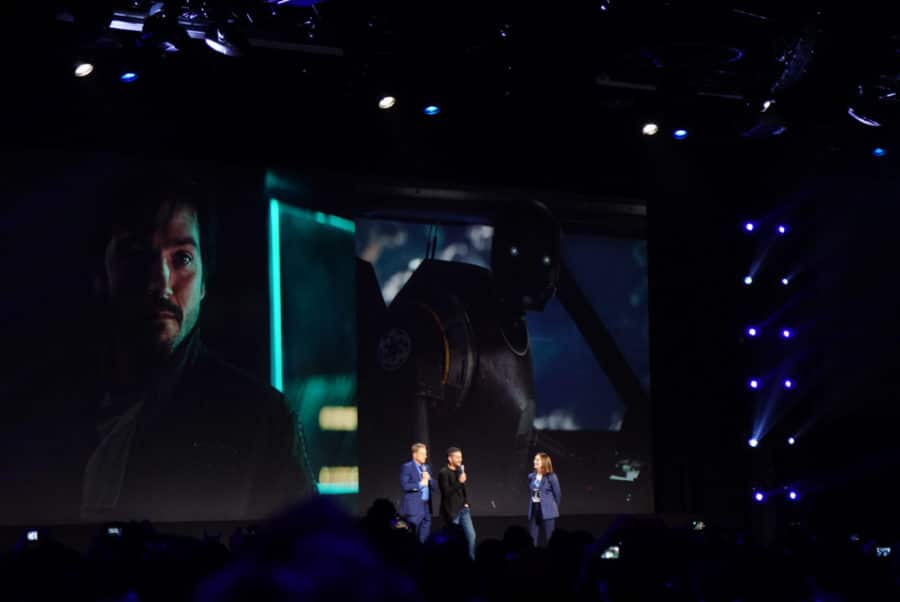 Jon Favreau and Dave Filoni came out and told us about what’s in store for the Mandalorian series on Disney Plus. It’s apparently going to be set in the time period right after Return of the Jedi when things are in chaos.

The show will star Pedro Pascal, Gina Carano, Carl Weathers and Giancarlo Esposito. And the addition I’m most excited about – Taika Waititi as Droid IG-11. Taika was easily my favorite interview from the Thor: Ragnarok interviews, and I’m sure he’ll be the perfect droid.

AND THEY ANNOUNCED THAT MING-NA-WEN WILL BE JOINING THE SERIES AS WELL! 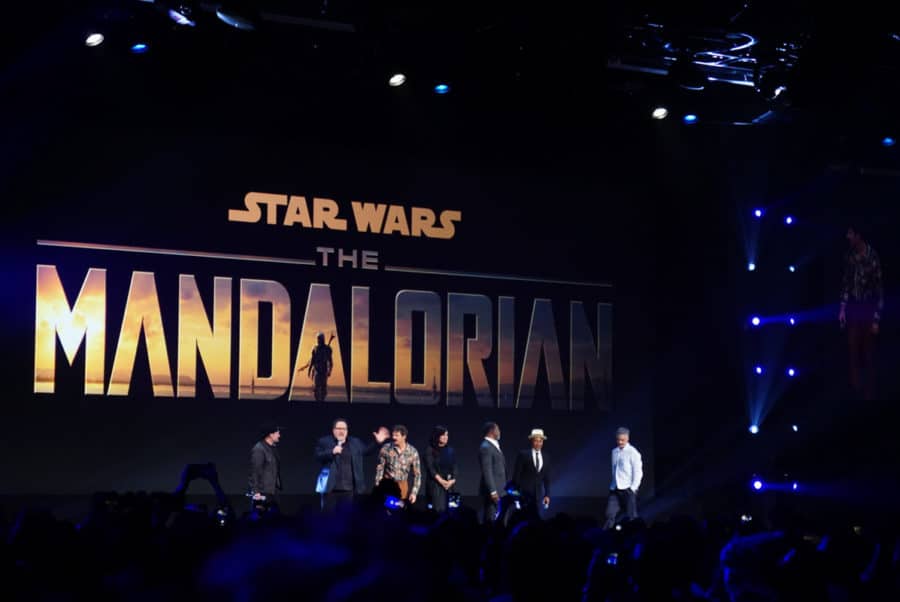 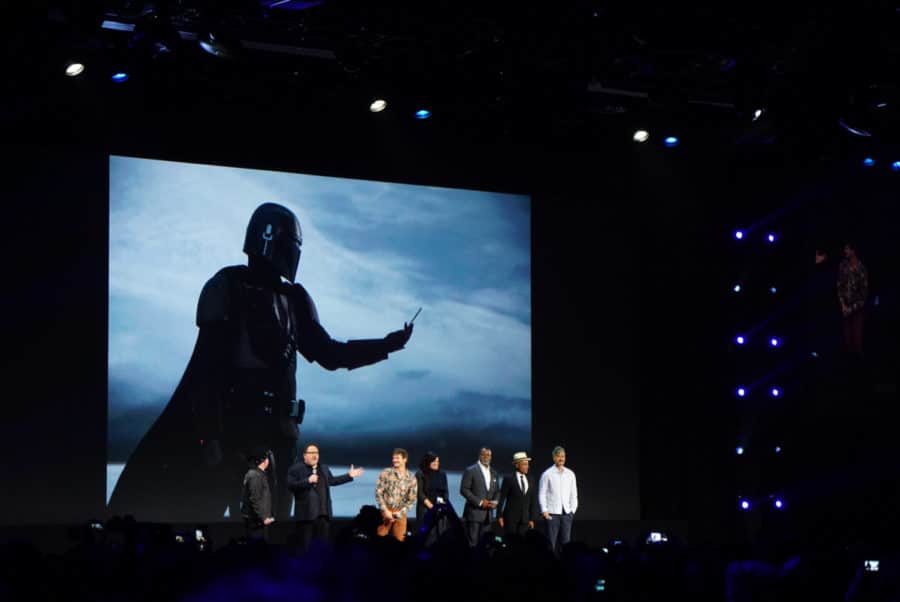 Last but not least, Ewan McGregor came out on stage and finally answered the question he’s been getting for four years – will he be playing Obi-Wan-Kenobi again?

The answer is yes – on Disney Plus. The brand new show will start filming next year. 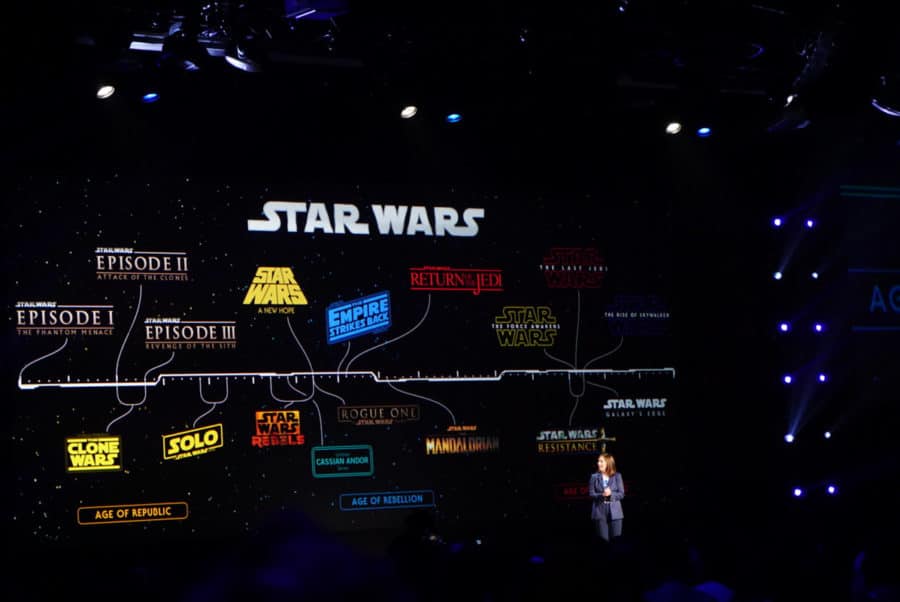 I started with Star Wars and Marvel but there is plenty of brand new Disney and Pixar content coming to Disney Plus as well, including tons of great new shows and movies made just for Disney Plus!

The iconic Disney Channel show Lizzie McGuire will return to Disney Plus starring none other than Hilary Duff herself as an almost 30-year-old woman living in New York City with a fantastic life, along with her 13-year-old insecure self. 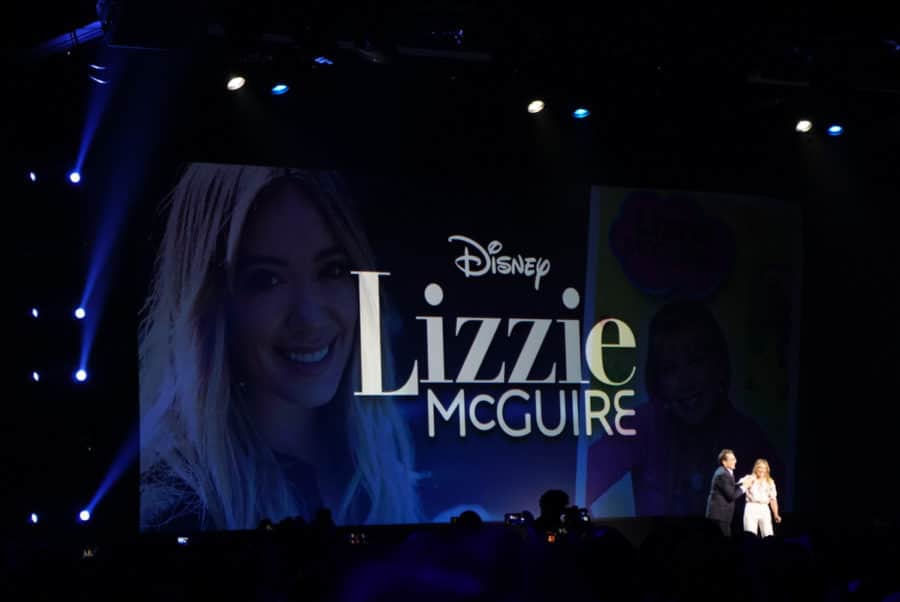 The newest Pixar star, Forky, will have his very own series of Pixar shorts called “Forky Asks a Question,” where Forky asks questions and other Toy Story stars try to help him answer it.

We saw a cute clip of Ham trying to tell Forky what money is, and I think this one will be a hit. I mean Forky is already a hit, just waiting for his meet and greet to hit Toy Story Land. 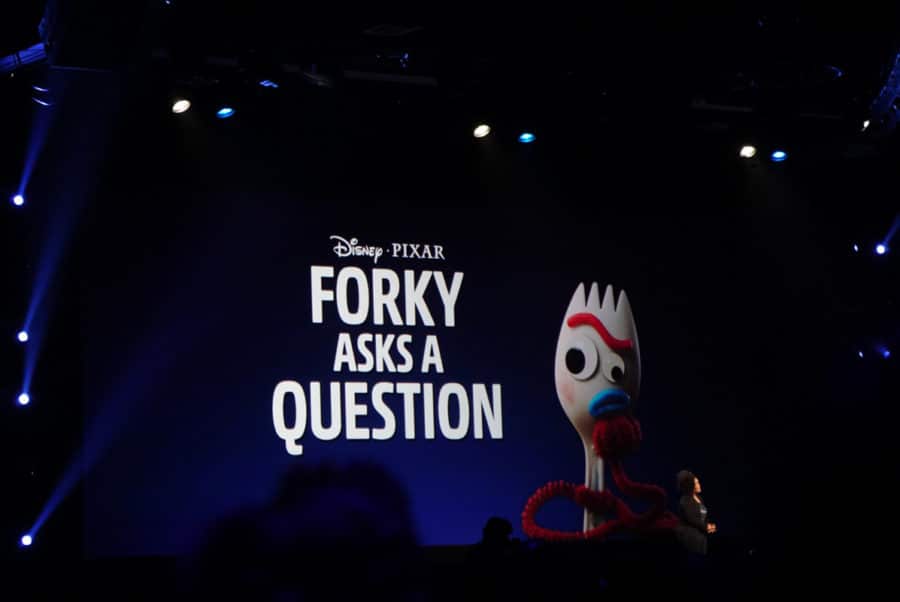 Monsters at Work will feature a Monsters Inc character who graduates from Monsters University the day that the city changes over from scare power to laugh power. Talk about scary! 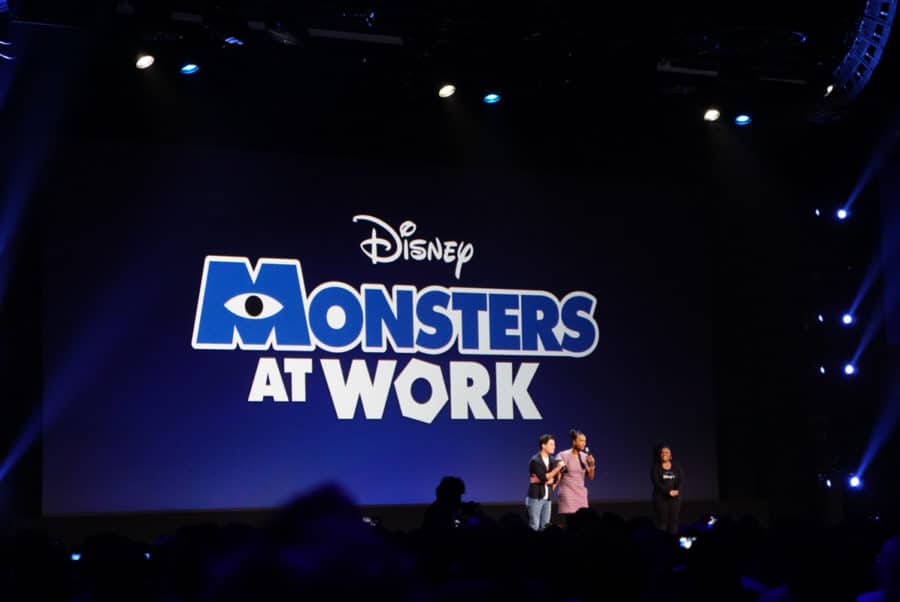 A new reality style TV series produced by Kristen Bell will follow adults back to their high schools to reunite with friends to recreate their high school musical productions. As someone who did show choir back in high school, watching the trailer for this one gave me all the feels. 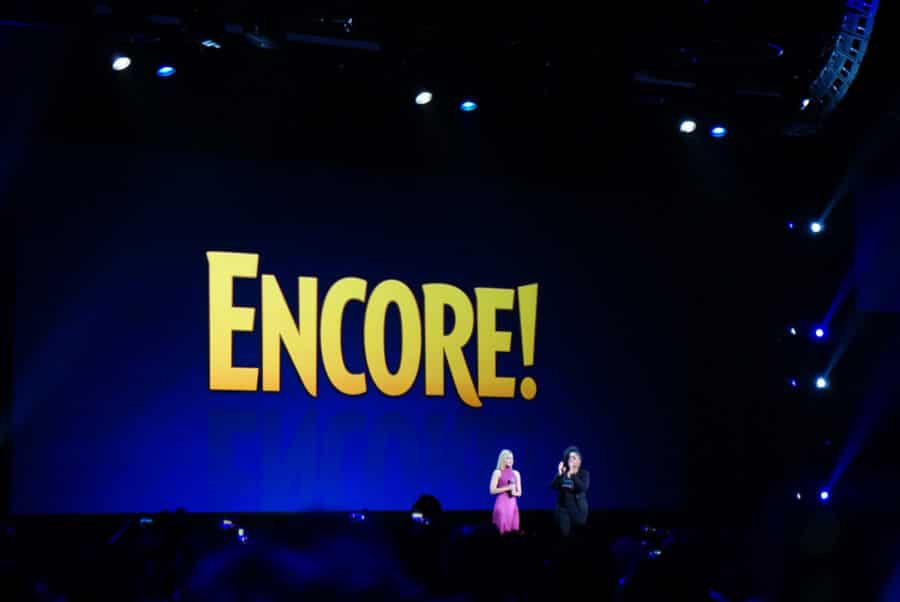 A movie starring America’s Got Talent winner Grace VanderWaal and Graham Verchere features a high school boy who is trying to figure out where he fits in.

Based on this best-selling book, Grace is Star Girl and shows Graham how to just be yourself even if it’s not the most popular thing to do. I loved the book and can’t wait for this movie! Star Girl will be available early 2020. 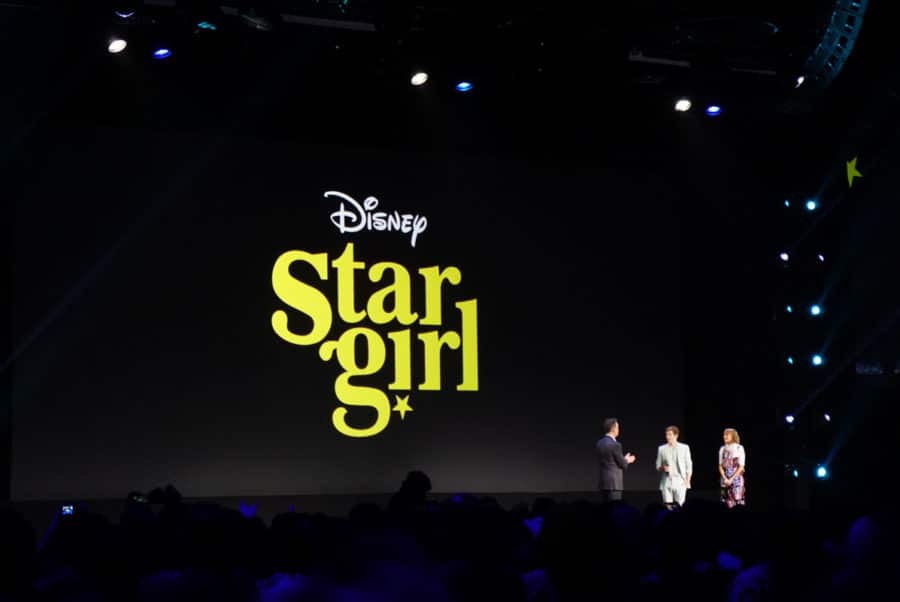 A new Disney Plus series starring Timmy Failure – a young boy with a 1500 pound polar bear for a best friend who likes detective work. We watched a short clip, and it looks like it’s going to be a cute one for the younger kids but probably not one for adults. Timmy Failure will be on Disney Plus in early 2020.

Lady and the Tramp

P.s., the dogs are absolutely adorable. They walked by my hotel room after the presentation and seriously just sweet pups! 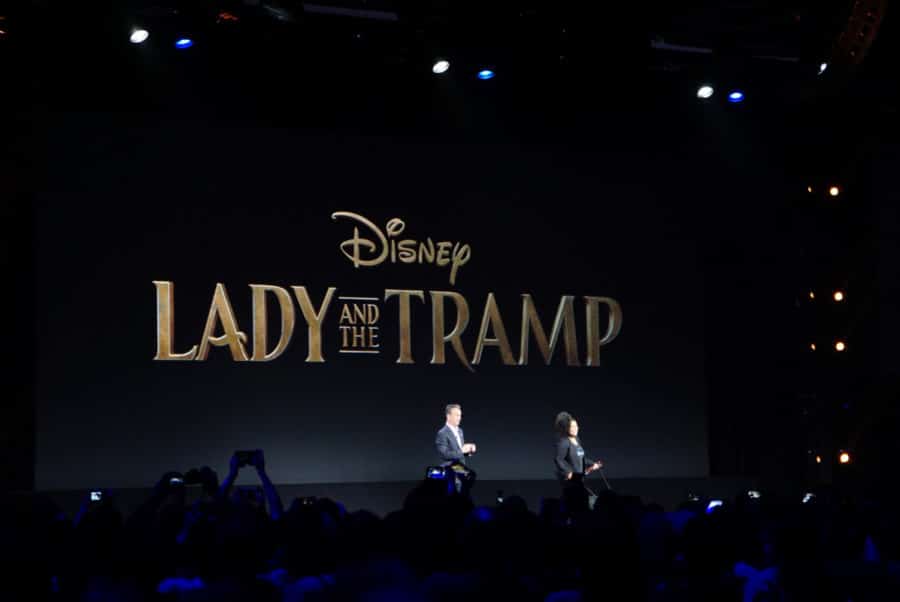 Did you know that Anna Kendrick has always wanted to be in a Christmas movie so that people could watch it every year? Well, she’s getting her wish with Noelle – a Christmas movie made just for Disney Plus. It stars Anna as Noelle Kringle, the sister to Santa Claus.

The trailer looked hilarious and bonus, we get to hear Anna sing again! 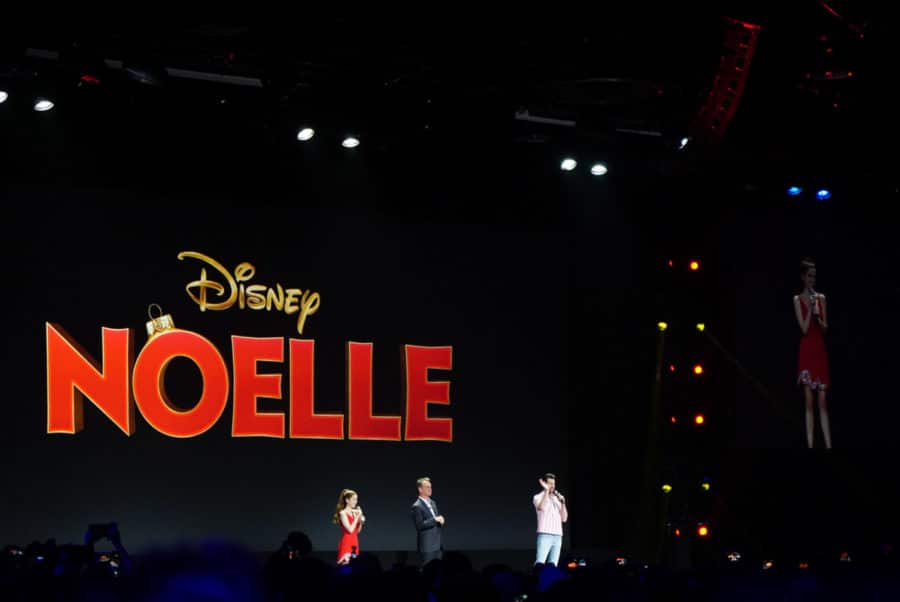 Diary of a Female President

In this new show, Gina Rodrigez stars as a woman who runs for the President of the United States. It follows her both as a middle school girl and grown woman. The story is narrated from entries in her diary from middle school all the way until she become President.

Diary of a Female President will be on Disney Plus in January 2020. 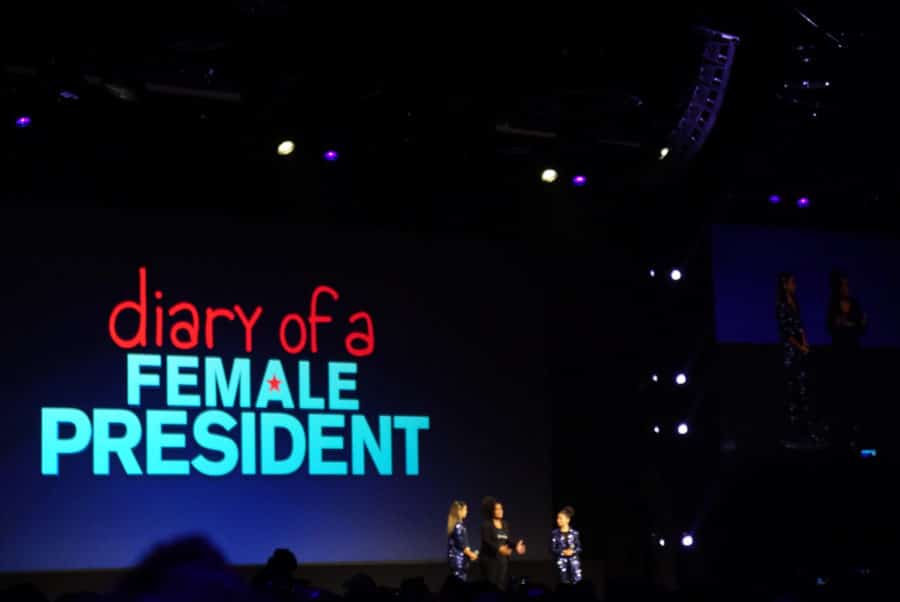 Confusing name and confusing concept but I watched the first episode of this reboot and I think it’s going to be great. Instead of trying to remake the original, the new series is about a class of students at East High (where High School Musical was originally filmed) who are putting on High School Musical: The Musical.

I’ll tell you this – it’s an extremely talented cast. They shot the series kind of in The Office documentary style. And there’s a great love triangle and fantastic music – definitely one I’ll be watching. 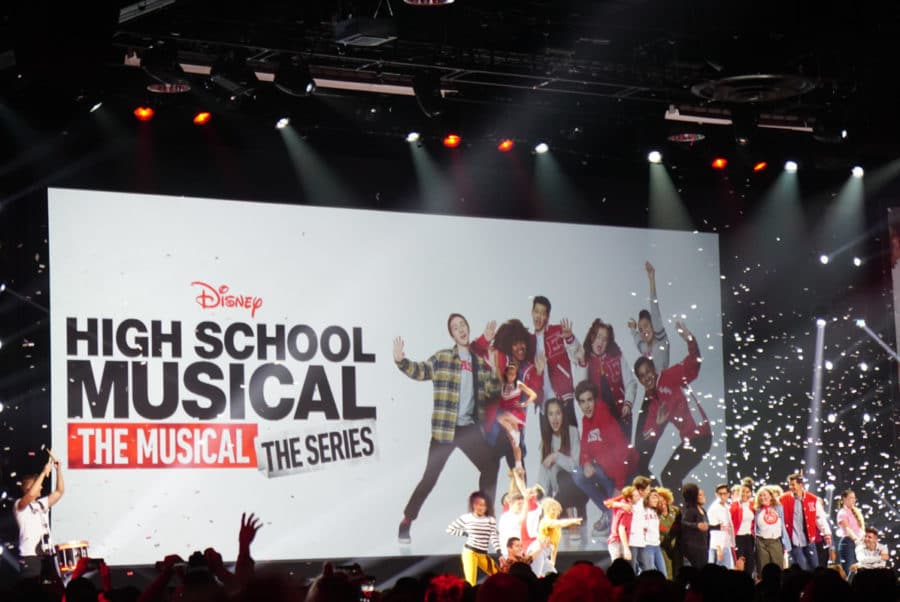 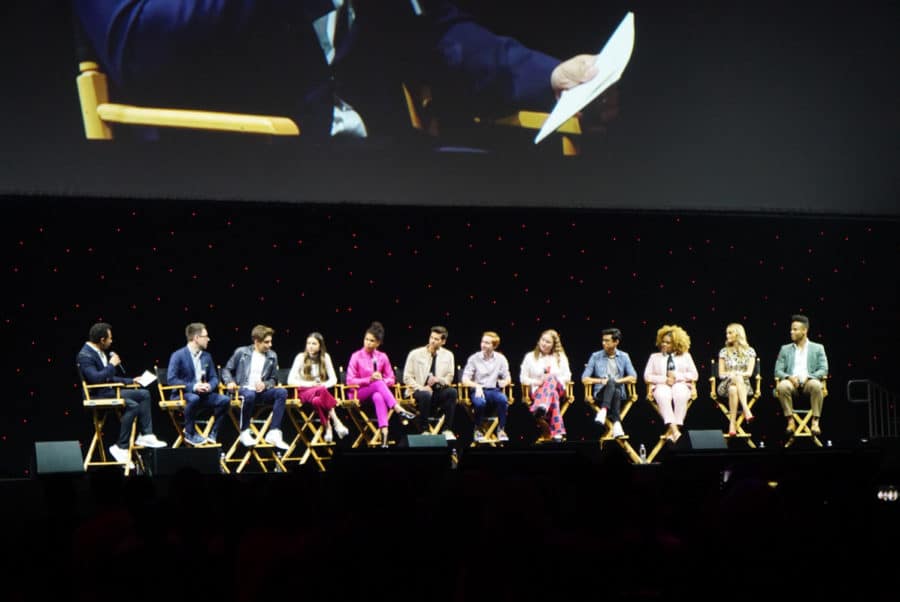 Phineas and Ferb The Movie: Candace Against the Universe 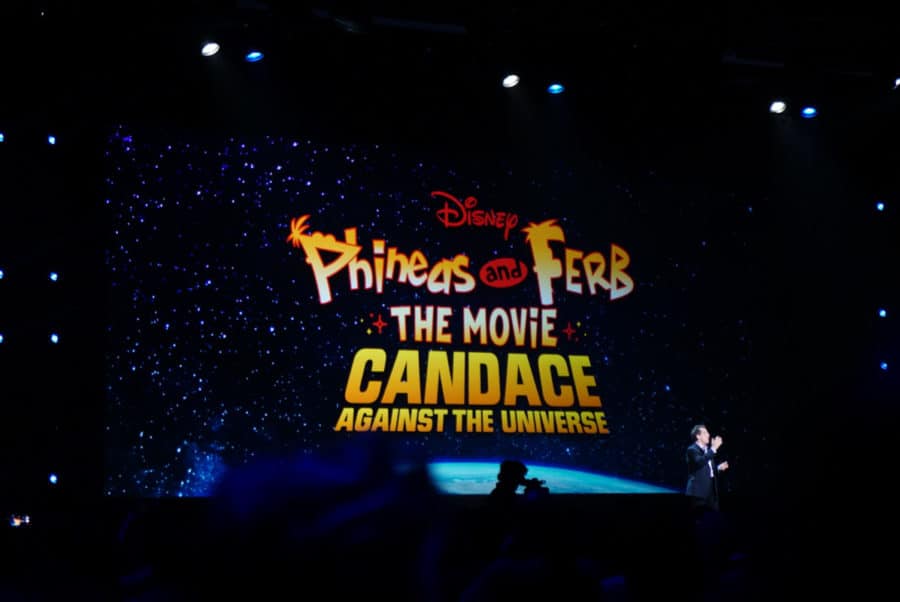 We didn’t get much other than a very non-descript clip on this show but there’s a new Muppets Now show coming to Disney Plus starring none other than the classic Muppets. It’ll be a nonscripted short form Muppets show of some sort.

Togo is a movie that will tell the previously untold story of a man in the Alaskan wildlife and his dog Togo. We didn’t get much other than a short clip showing us this adorable Alaskan sled dog, but it sounds like it’ll be the story of this Alaskan Man and his dog on a life-altering journey together.

Togo will be on Disney Plus in December 2019.

With Disney owning so many different properties now, it opens the door to a huge realm of possibilities. National Geographic gave us details about two new stories coming to Disney Plus.

The World According to Jeff Goldblum

And last but not least, a brand new show featuring Jeff Goldblum learning about various things like ice cream, tattoos, and more. Jeff is hilarious and crazy to say the least, which means this show could be a great one. 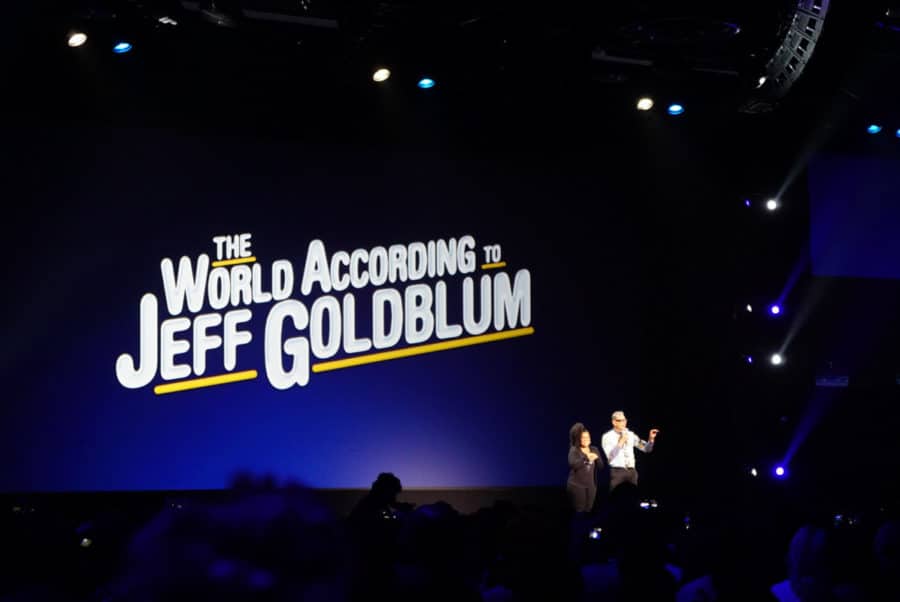 What Else is on Disney Plus?

In addition to all of the new original content and series coming to Disney Plus, Disney Plus will also be home to beloved movies and TV shows, many that were not available anywhere else to stream digitally prior.

Here’s just a few of the things you can expect to see on the brand new Disney Plus!

Disney Plus will be available to consumers everywhere on November 12, 2019. 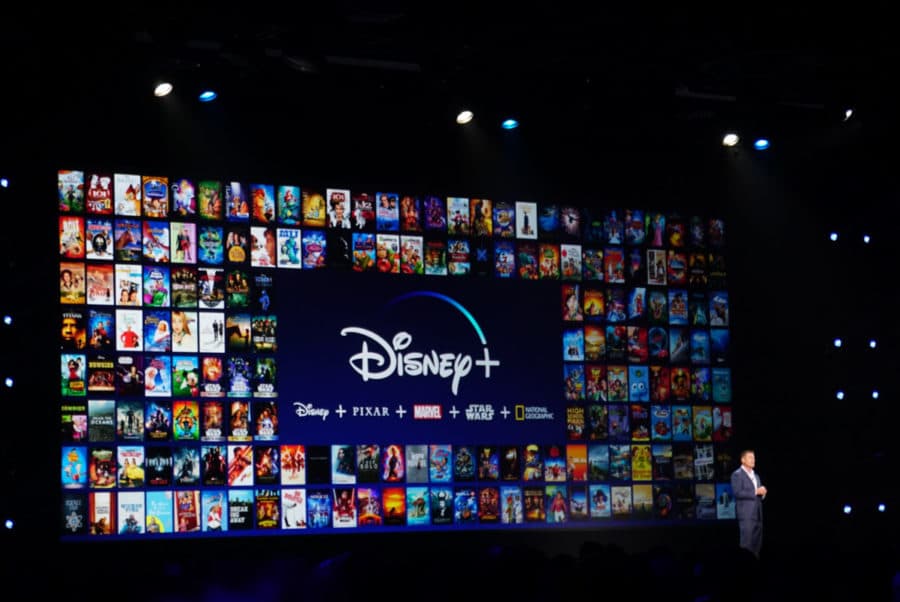 Don’t forget to pin this list of Disney Plus shows for later!