Looking for New Year’s Eve games for adults? Look no further! These five New Year’s Eve party games are perfect for testing what people remember about last year and getting people excited about next year! From printable trivia games to naming songs from a popular playlist, there’s something for everyone!

Prep: Before the party, print and cut out these resolution cards, fold in half once, and place in a basket. You can print out the resolution cards by clicking on the image below and printing the PDF document that pulls up. 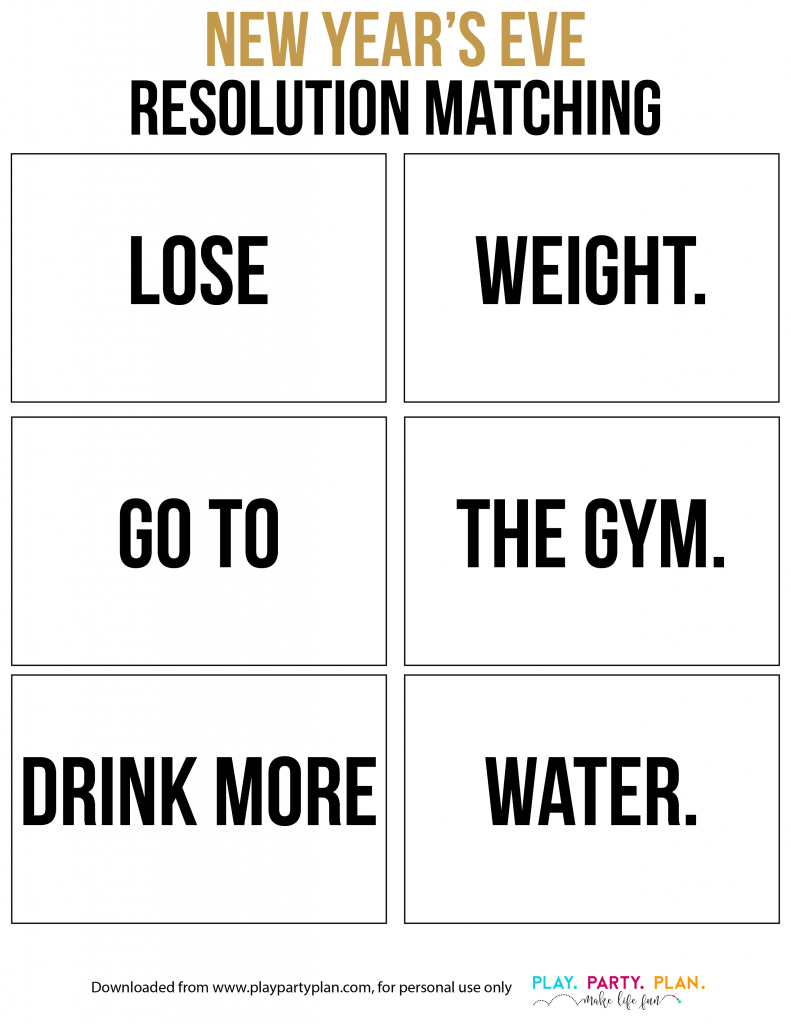 As guests walk in the door, have them pick one of the printable resolution cards from a basket. Each card has half of a traditional New Year’s Eve resolution on it. Guests should pick a card and look at it but not show anyone else.

To play, guests must go around the party and ask other guests yes or no questions about the resolution on the card to try and find the other half of their resolution.

So for instance, one full resolution, “go to the gym,” might be split onto two cards – “go to” and “the gym.” The person who has “go to” would have to go around asking people yes or no questions (e.g., is your card a place) until they find a card that matches their resolution. 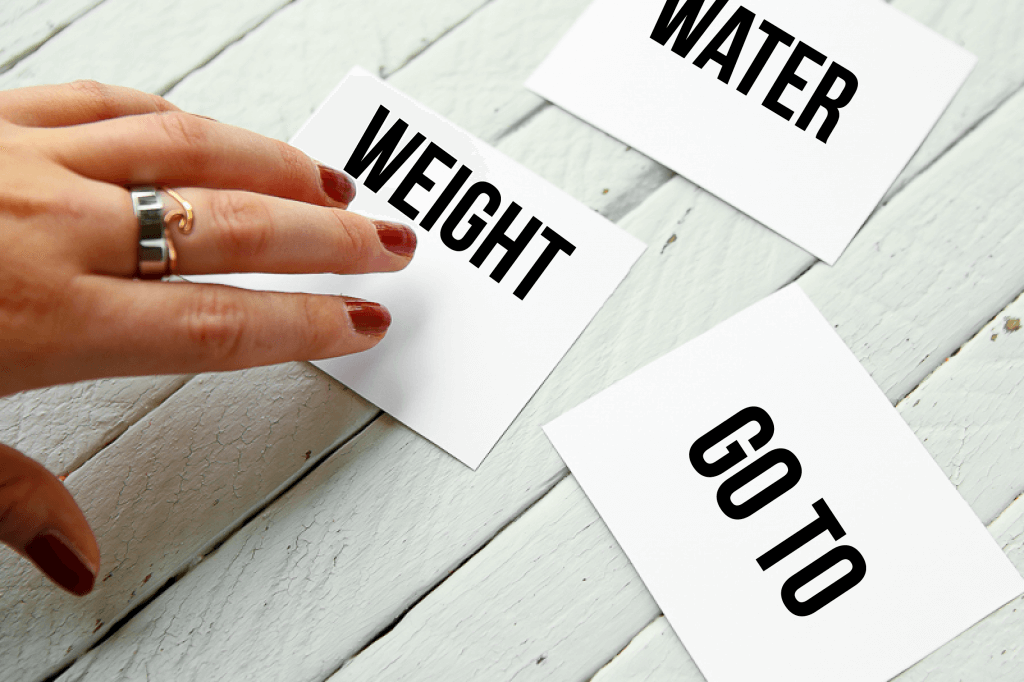 Once players have found their resolution match, they have to go tape the resolution to this photo booth above their heads and take a picture together. First team to get a picture with the correct resolution wins a Champagne Bottle Party Popper, it’s seriously the best New Year’s Eve popper ever! 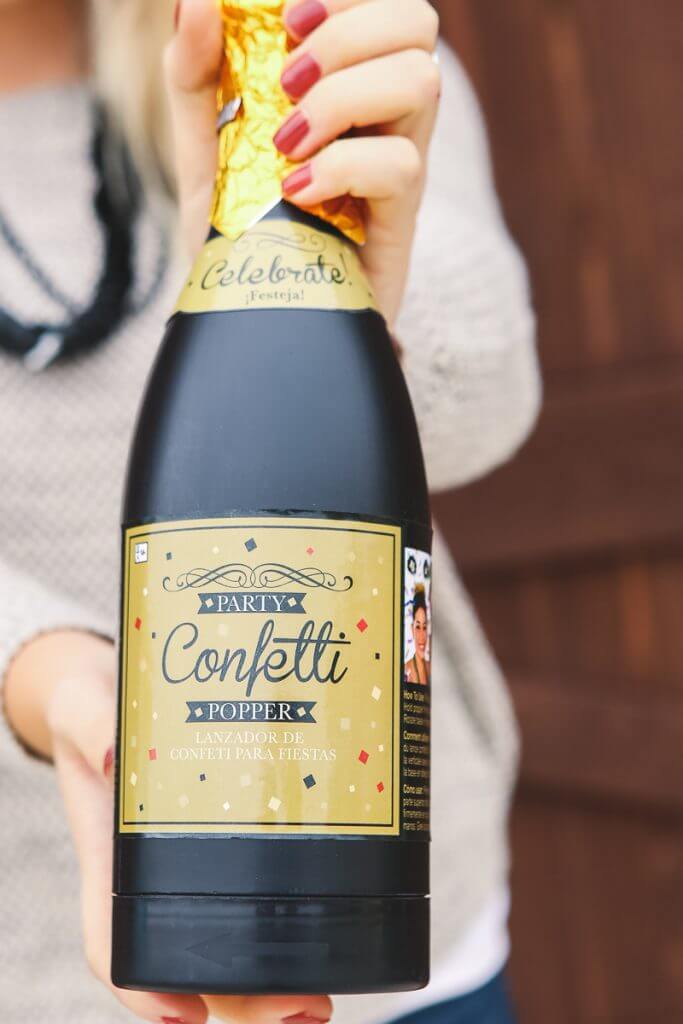 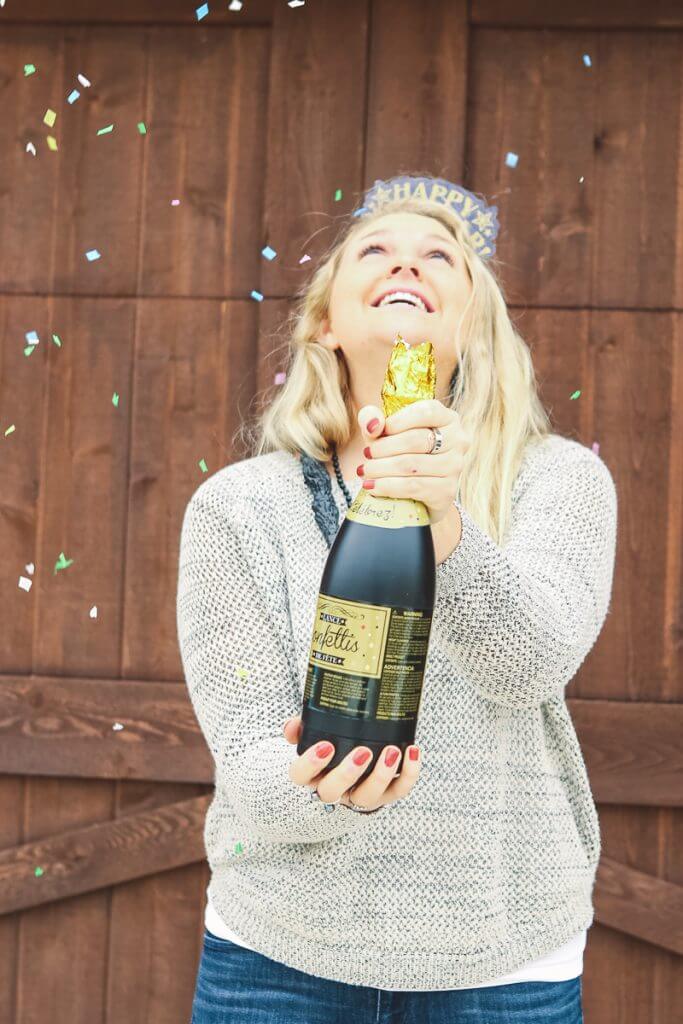 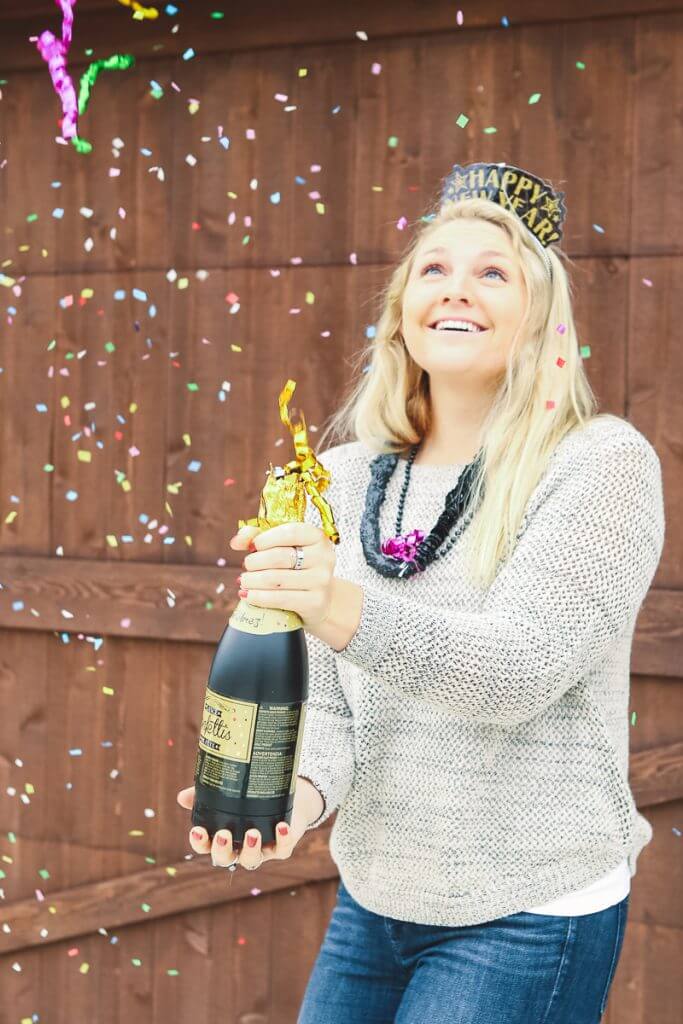 All I did for the wrappers was to add “New Year’s Eve” to the wrappers and Shindigz does the rest. When they arrive, they’re pre-printed, pre-cut, and already sticky. You literally just peel them off like stickers and add to your candy bars.

Also, put a piece of masking tape on a big pot lid and write the year on it. This will be your caught pot. 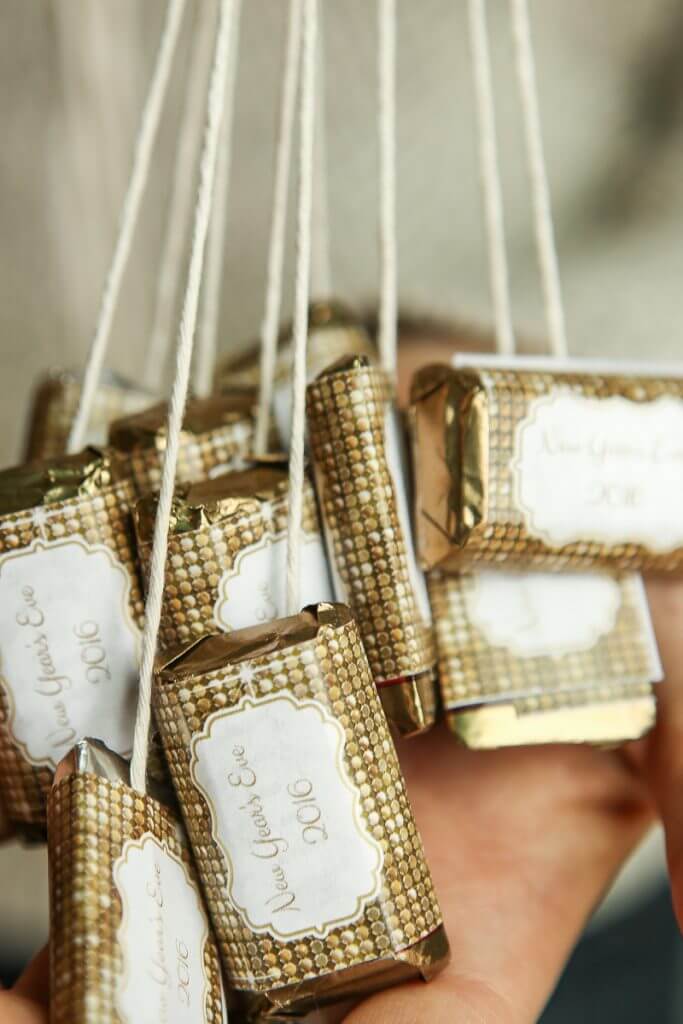 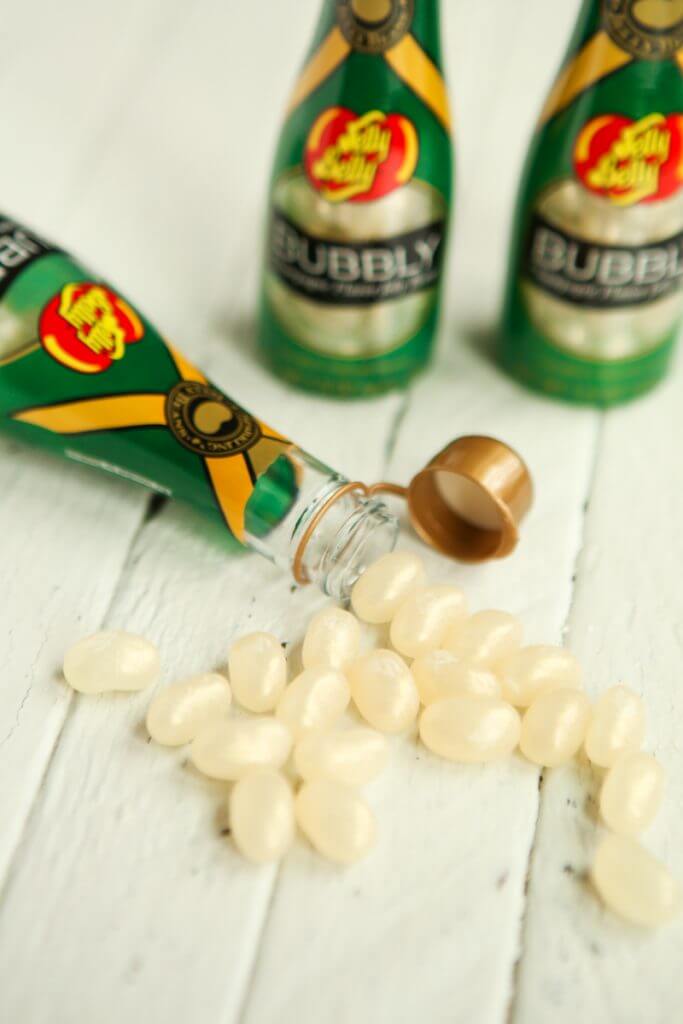 Give everyone a mini candy bar with a string attached, and three of these Jelly Belly Bubbly jelly beans. Everyone has to put their candy bar in the middle of the circle then sit down, holding onto the other end of their string.

Choose one player to start and give them a pair of dice and have them remove their candy bar from the middle of the circle.

If they roll doubles, they immediately bring the pot lid down on top of all of the candy bars in the middle, trying to catch as many as possible before everyone else in the circle realizes doubles were rolled and pulls their strings to get their candy bars out of the middle.

If anyone’s candy bar gets caught in the middle, they have to give one of their jelly beans to the person who caught them with the pot lid.

Continue going around the circle, giving everyone a turn to roll the dice and be the candy catcher. If anyone loses all of their beans, they’re out and leave the circle.

Continue playing until you’ve either gone around the circle a set amount of times (like 5) or until only one person has beans lefts. The person with the most jelly beans at the end of the game wins.

New Year’s Eve Games: A Seat at the Table

Prep: Order this Gilded Romance Table Top-It and use the customizing software on Shingidz to create months all around the inside of the table. Either place or tape the runners onto rectangle tables at your party.

You want to make sure to have one month per person at your party, so if you are planning to have 24 people at your party, order two table runners. Number the tables in some way.

Print out cards with pop culture events that happened during the year, making sure they’re ones with a specific date. The photo below shows some examples for last year, but you can use the events from these printable trivia games to make cards for this year!

On the back of each set, write a number that corresponds to the table numbers. For instance, all of set one will have the number one on the back and those will correspond to table #1. You can print the cards by clicking on the image below to download a printable PDF. 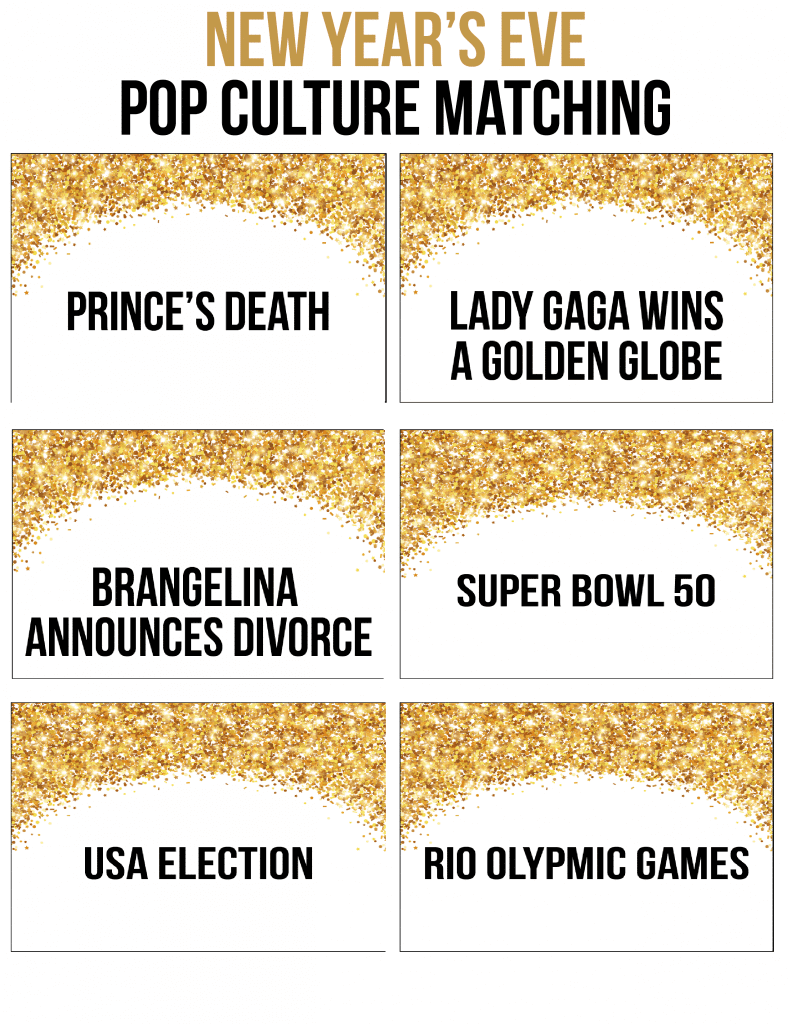 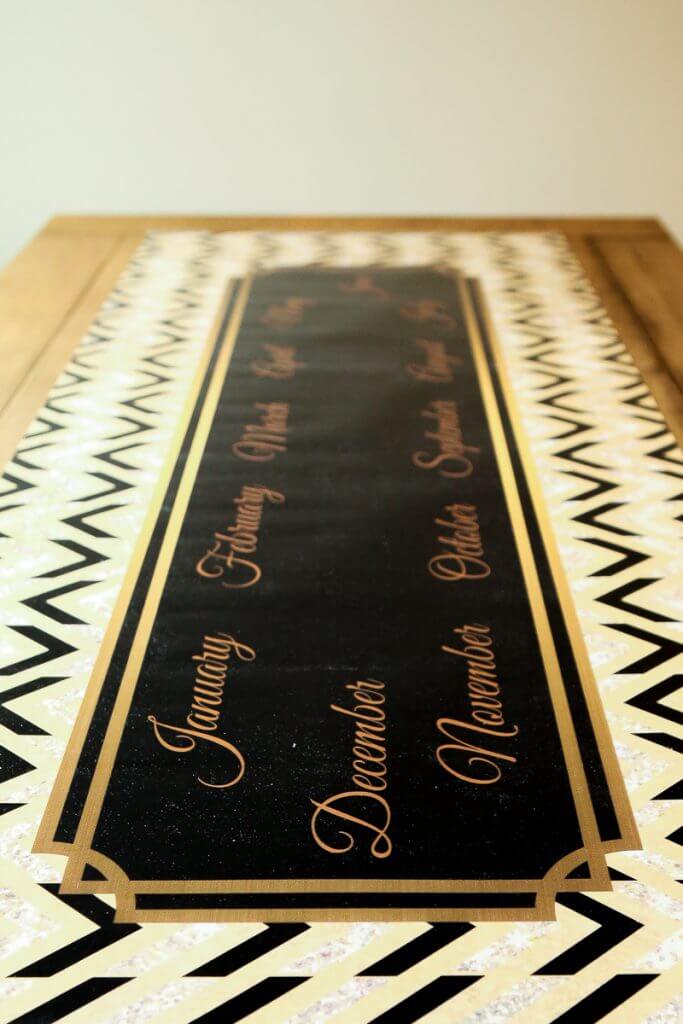 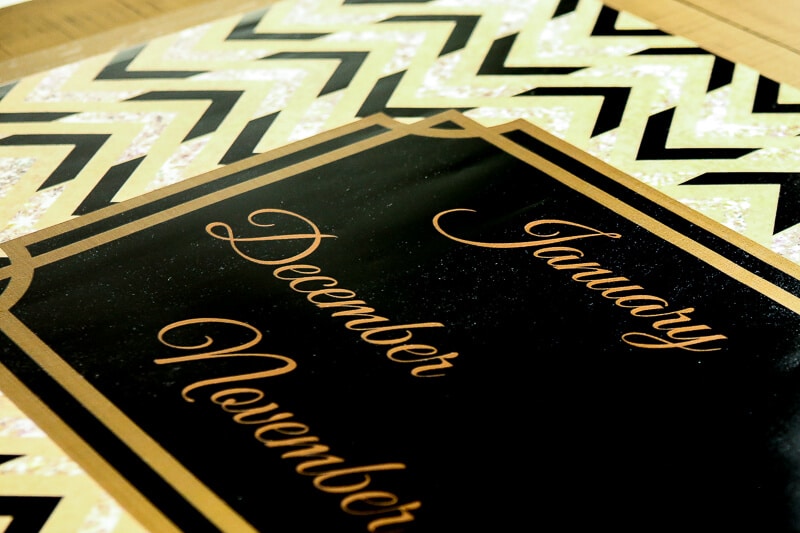 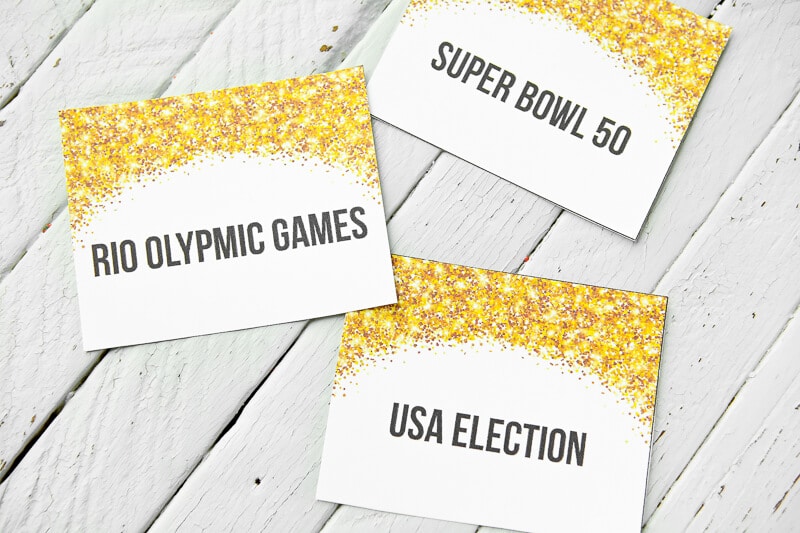 When you’re ready to play, have everyone stand up and pick a card from the basket without looking at it. When you say go, everyone has to read their card and find the table that matches the number on the back.

When they get to their table, they have to then find the month on the table runner that matches the month the pop culture event on their card happened. The first table to have everyone on their team in the right place around the table wins.

Teams can help each other to get everyone in order, but no Google or outside help. 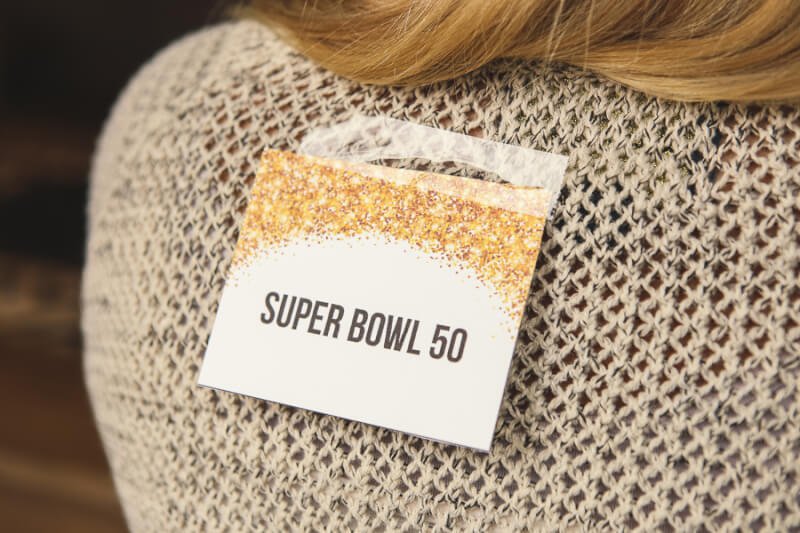 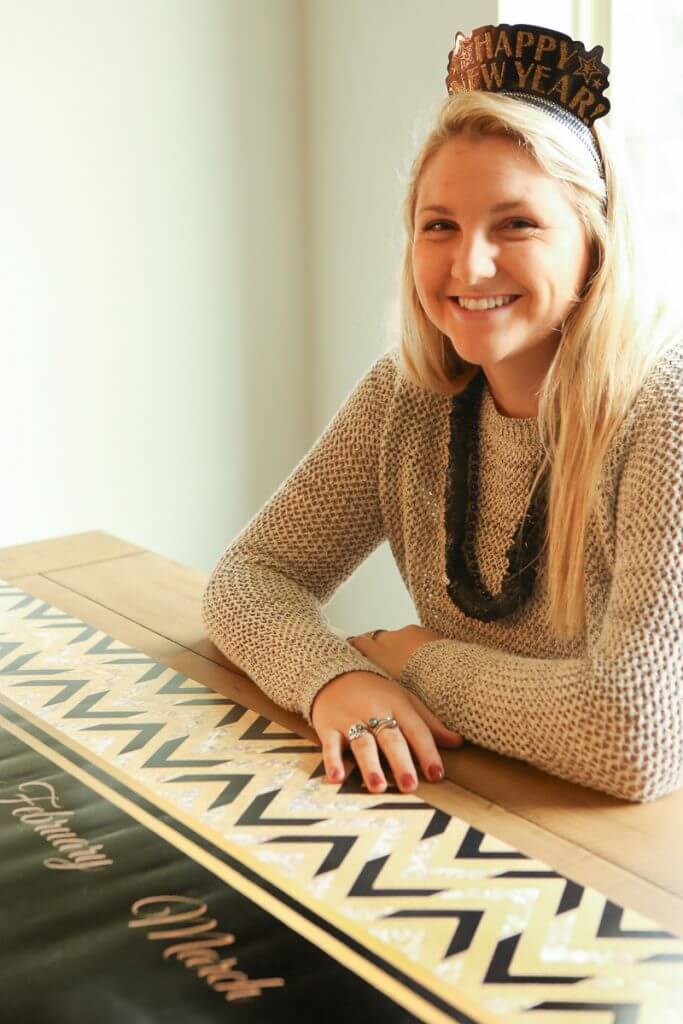 How to Choose Teams for New Year’s Eve Games

For the next two games, the first thing you need to do is split your group into two or three even teams. For New Year’s Eve, my favorite way to do this is to buy a big box of New Year’s Eve supplies that has different colors of party hats, noise makers, etc. in it.

When people come in the door, have them pick out a party hat and costume to wear for the night but don’t tell them the colors mean anything.

This particular New Year’s Eve set is great because it has black, gold, and silver everything. Put people on teams based on the colors they chose – gold on one team, silver on one team, and black on one team.

If you need more teams, divide even further based on the items they chose – leis vs. beads, hats vs. tiaras, etc. Then play. 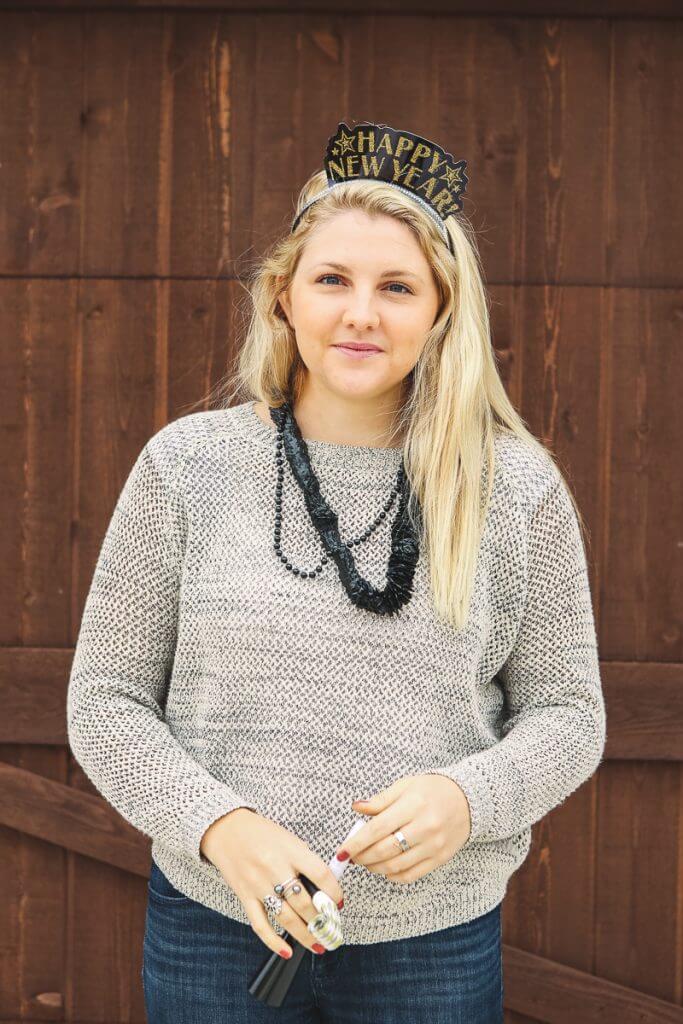 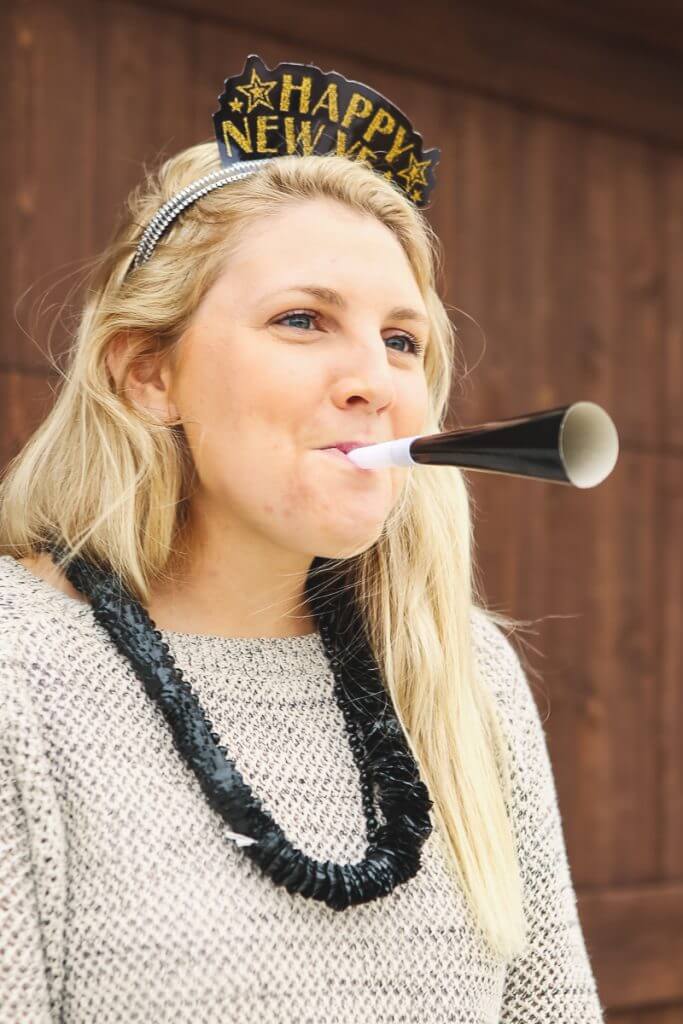 Prep: Split players into teams and print out the printable list of topics and answers or come up with your own.

At the beginning of each round, have one player from each team come to the front of the room and have them stand in a line side by side. Give the group the topic and starting with team #1, have each person in line name something that fits that topic (e.g., 20 top box office grossing movie films for the year).

Go from team 1 to team 2 to team 3 and if anyone can’t come up with an answer in five seconds or gives an incorrect answer, their team is out for the round and they go sit down with their team. Continue going through the line until only one person is left standing; that person wins one point for their team.

Go through enough rounds that every player on the team gets a chance to play at least once. The team with the most points at the end of all of the rounds wins a prize.

I’ve come up with 20 different topic questions and answer lists that you can print and download by entering your name and email address in the form below.

Prep: Create a playlist using songs from Billboard’s top songs of the year or use the New Year’s Eve playlist that I created for this year. If you use my list, make sure to mix up the order because I went pop, country, etc.

Split your group into two teams (any more than that is tough) and create a scorecard on a piece of white poster board or on a dry erase board.

Play the first song on your playlist loud enough that everyone in the room can hear it. Everyone on both teams listens to the song at the same time and have to compete against one another to be the first team to shout out the song title and the artist who sings the song. And if the song was made for (not just featured in) a movie or musical, they can guess that as well.

Continue through your entire playlist of songs, only playing the song until all of the items above have been guessed. Once they’ve been guessed, silence the group and play the next song.

Once you’ve gone through the entire playlist, the team with the most points wins.

Get Your Free Printables 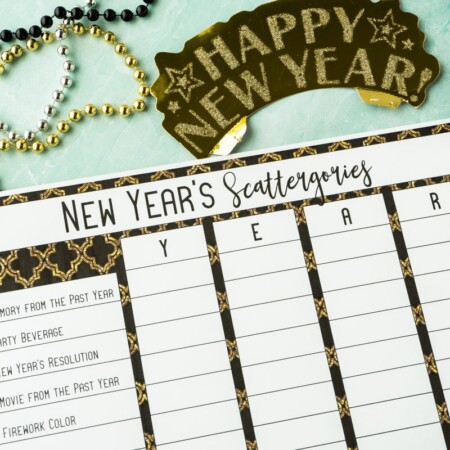 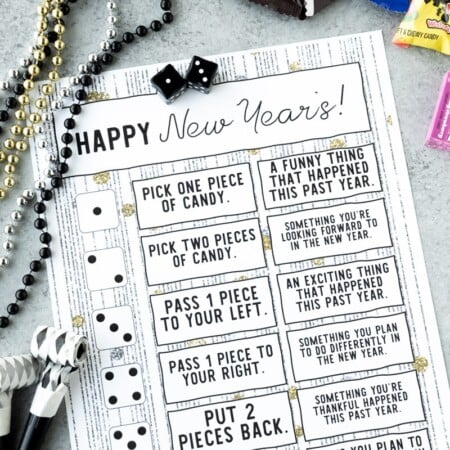