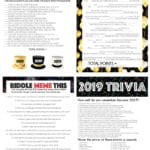 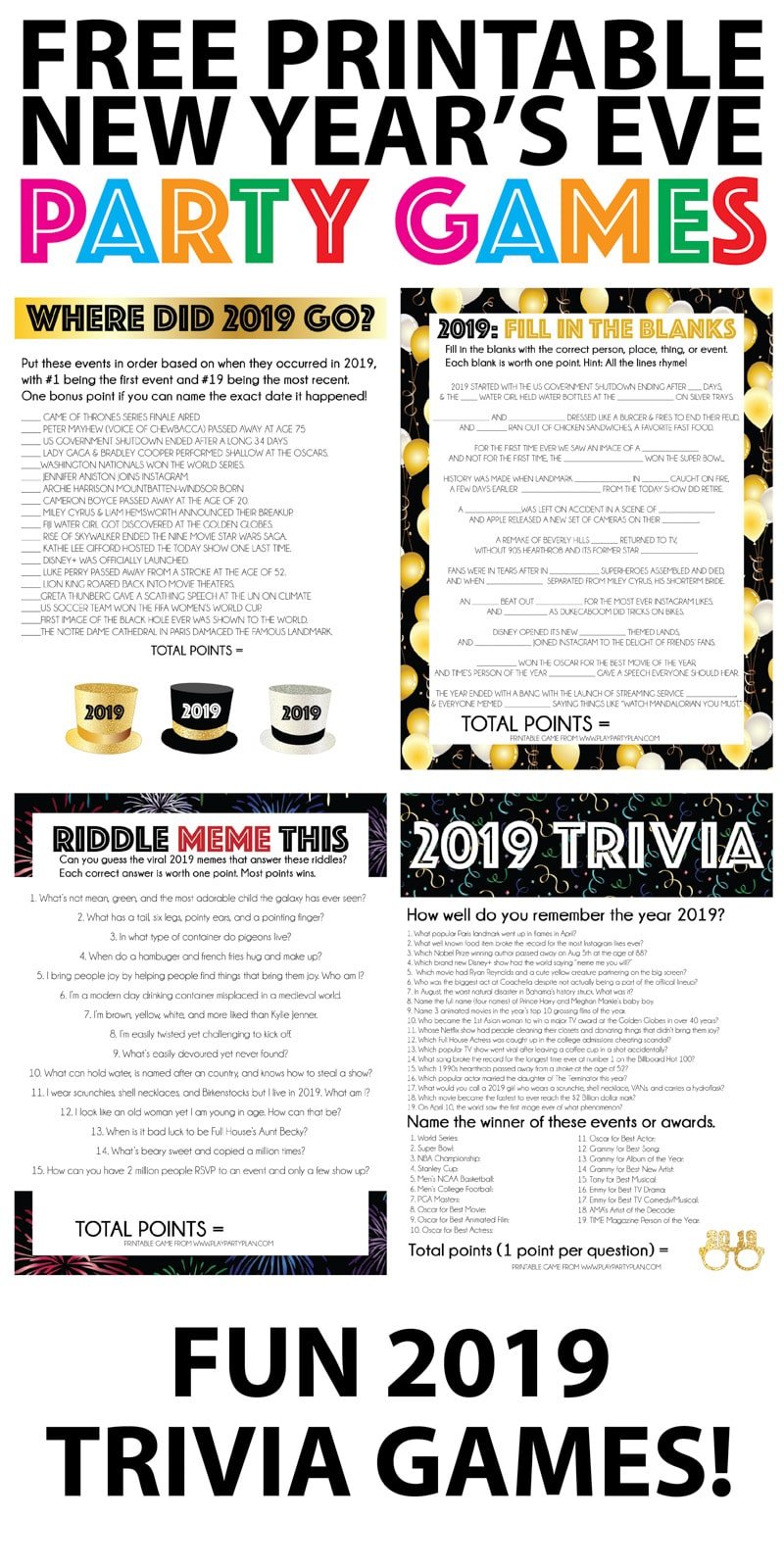 One of my favorite traditions each year is creating printable New Year’s Eve games based on pop culture, sports, and news events from the year. I’ve been creating New Year’s Eve trivia games for the last like nine years, and they’re always a big hit at New Year’s Eve parties!

All five of these games use trivia from the past year including sporting events, news events, and pop culture events. As you’re reading through the games, you’ll probably notice that there are some major topics from the year missing – Trump, mass shootings, bombings, and other things I just didn’t think needed to be of a party conversation.

I know they were major parts of the year, but they are also sad and possibly controversial, so I just decided to not go there. Just know that I remember them and was just as affected as anyone else, it was a conscious decision to leave them off the games.

The other thing you may notice is that a lot of the trivia questions or facts are used on multiple games. Most people don’t play all five of these games at their parties (you definitely could), they normally play one or two at most.

Since a lot of the trivia things used on the games are major events, they will span across multiple games. So the second game may be easier for anyone who played the first.

If you’re going to play multiple games, I recommend doing the where did the year go last because it just lays out the facts and events from the year and if people have already done that one, the other ones won’t be nearly as challenging.

The answers are in the PDF file that you get when you enter your first name and email address in the pink form toward the bottom of this post. You have to fill out the form to get the answers. No form, no answers. Hopefully that clears things up for everyone.

This is one of my favorite New Year’s Eve games because it gives me the chance to go back and look through the most popular music and movies from the year. Hello Old Town Road!

The game is easy – read the lyric from a song or quote from the movie on the line and match it to whatever piece of artwork it came from.

The songs and movies are all mixed together to make it a bit more challenging. 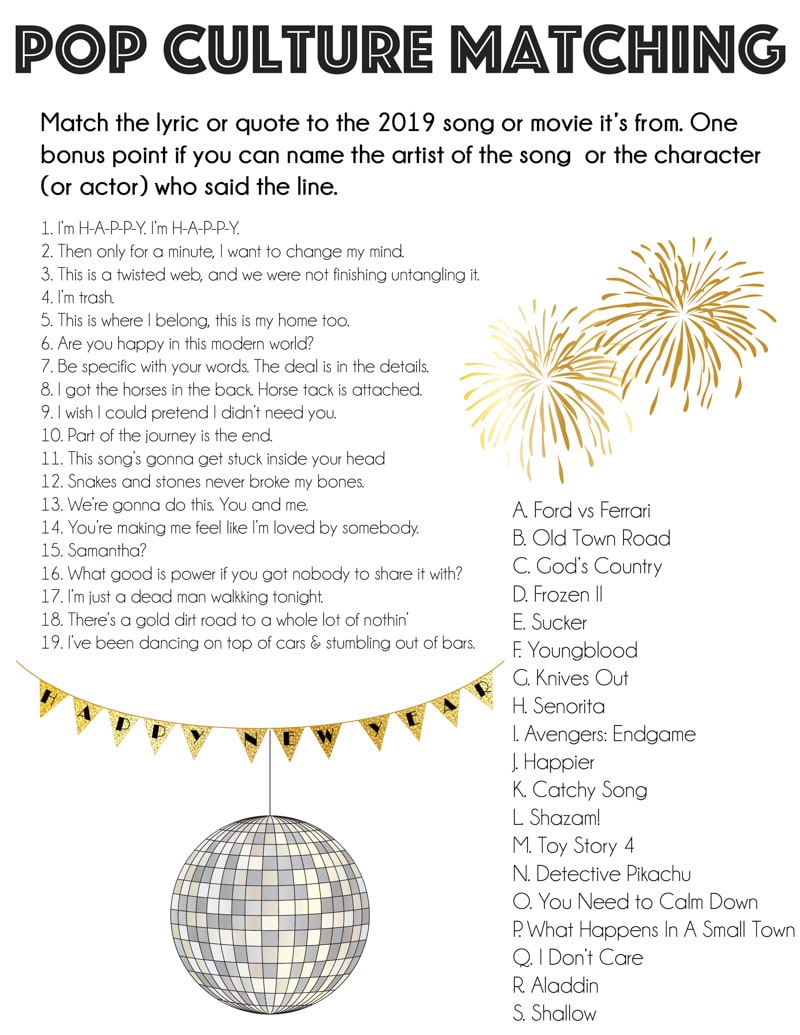 This is probably the toughest of all of these New Year’s Eve party games because you actually have to know the answer, no hints or clues. This is also a fun one to play just to remind people of all the good things that happened this year! 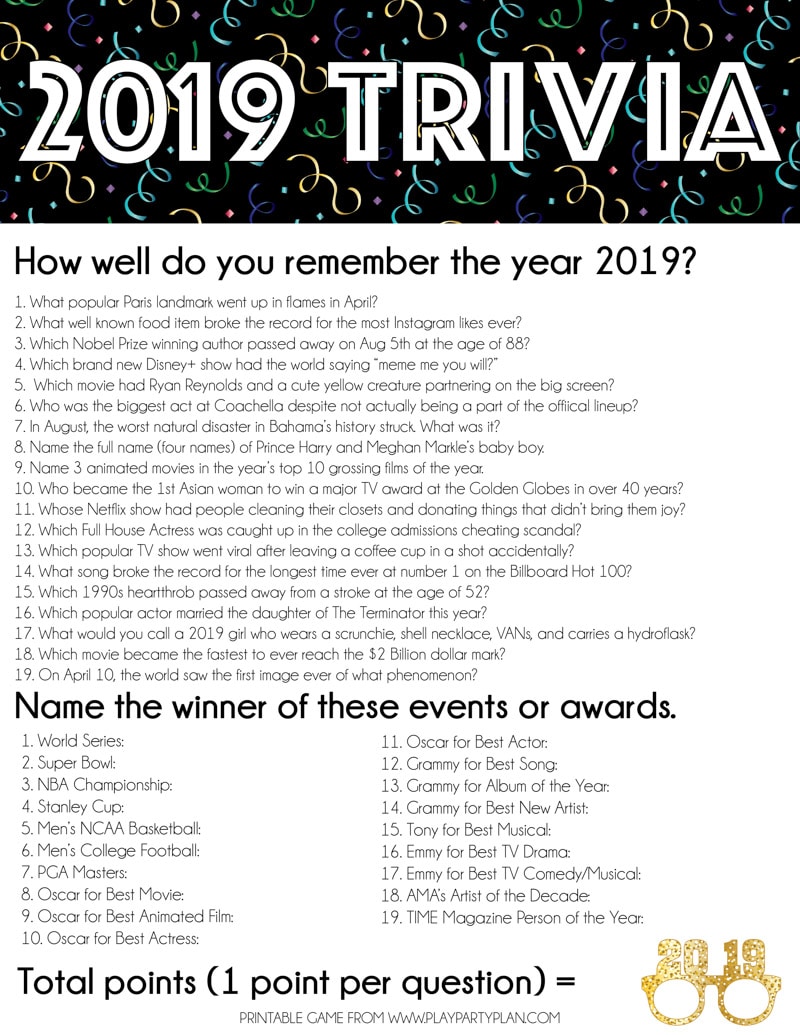 Okay so maybe I lied, this New Year’s Eve game might be the most challenging of the five.

In this game, I’ve put together a list of 19 events that happened during the year. Players must put the number of the events in order from the first to happen during the year to the most recent.

Some of them are easy like when Disney+ was launched and others will have you scratching your head. Like trying to remember what night you realized that Liam and Miley weren’t going to make it after all. 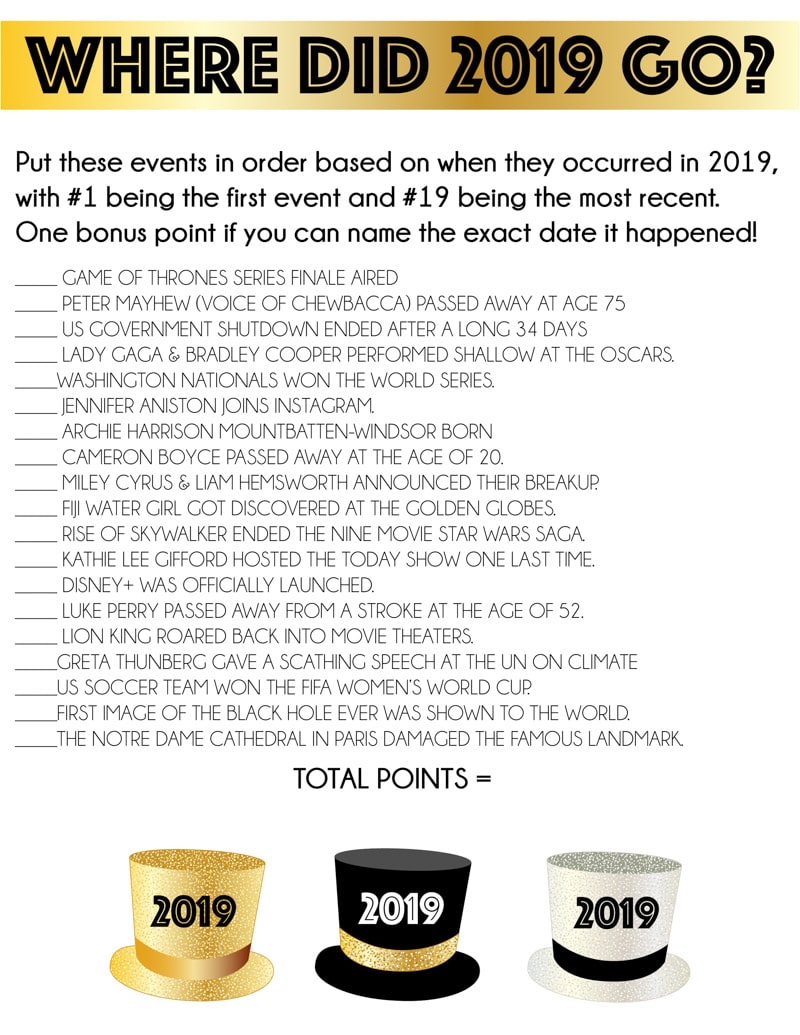 The game is simple. I’ve put together a bunch of rhyming lines that spell out events that happened this year. Those lines have blanks that players have to fill in. When lines are filled in correctly, they’ll rhyme. This year’s game has everything from the government shutdown to the Keanussance. 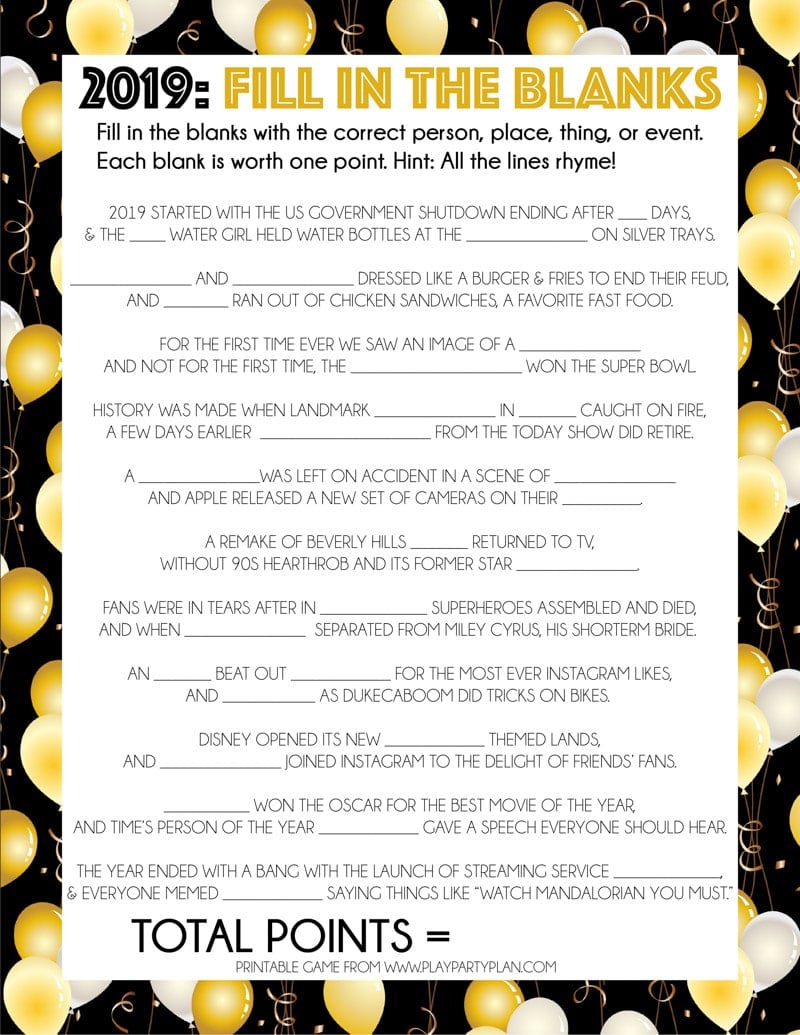 This is a new game for 2019 and one I’m kind of excited about because there has just been so many good memes this year and memes are hard to really put into trivia unless they have facts behind them.

The name of this game was all my husband’s idea and honestly coming up with riddles for memes was tricky. But I think we made it work!

The idea is that I’ve written riddles that are answered with one of this year’s most viral memes (e.g., screaming lady and the cat, Baby Yoda). The answers aren’t necessarily one word answers but if someone gets the general sense of the meme, they get a point. Most points wins!

I’d love to hear your feedback and see if this is a game you’ll actually play and one that I should keep doing for future years! 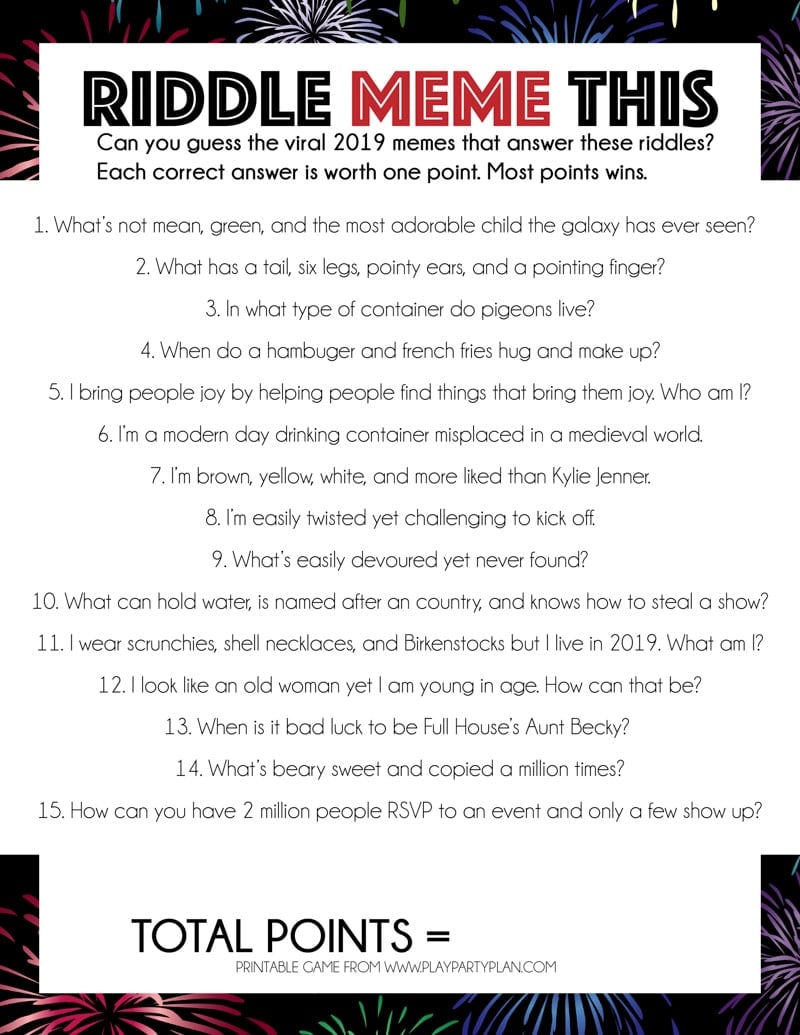 I love giving out prizes for these games that are related to things from the past year! I’ve put together a handful of fun prize ideas but if you need more, here’s a whole collection of fun 2019 themed prize ideas! And another idea that is always fun is a $19 gift card (or whatever year it is!)

Enter your first name and email address below to get the free printables – both the games and the answers. You’ll be immediately taken to the Google Drive folder to download the game (and version) you want and receive a link in an email shortly after. If you can’t see the form below, click here to get to the form to enter your info.

ALL five of the games AND the answers are in one PDF document for your convenience. There are two versions of each game – a full sheet version and a half-sheet version (to save paper), plus the answer sheet for a total of 15 pages.

You should also receive an email with a link at the very bottom of the email to the file in case you forget to download it now.

Once you’re done downloading the file, use your browser back button to come back to this page. And don’t forget to check out this fun gift exchange game that would be a perfect addition to your New Year’s Eve party!