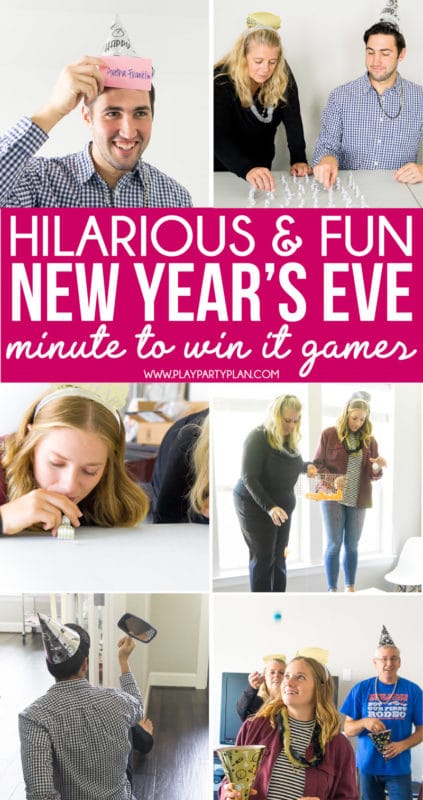 These hilarious New Year’s Eve games are perfect for playing with adults or with families! Sixteen different New Year games that will have you laughing long after the ball drops! Play one, choose a few favorites, or play them all!

How to Play These New Year’s Eve Games

All of these games were originally written as minute to win it style games, but you can easily just play them as regular games as well!

If you do want to do it minute to win it style, these are the three ways you can play depending on the number of people you have playing.

Note: If any of these challenges seem to easy or too hard for the group you’re playing with, feel free to adjust slightly. For instance, if you have an extremely coordinated group for #1, make them catch 10 or more.

Or get my bundle of 12 printable New Year’s Eve games all in one place!

Watch the video below for a quick look at how fun these games really are!

Give one player a bag of cotton balls

and give the other player (from the same team) a New Year’s Eve party hat.

For the game, player 1 must stand behind player 2 and toss cotton balls or pom poms over player 2’s head. Player 2 must try to catch the pom poms without turning around and looking back and their teammate, just by stretching and reaching to catch the poms.

Put all of the numbers in a large bowl. Put the bowl with the numbers in the middle of a table. Put four smaller bowls at the four corners of the table if it’s a large table or put them in four places around the room. Assign each bowl a number and a color – e.g., blue 2, red 2, purple 2, green 0.

Player must sort the numbers in the large bowl into the smaller bowl within the time limit selecting only one number at a time and they MUST sort the number they selected (can’t put it back to do all the blue 2s, etc.).

Player must pop all five balloons in the allotted time using just their hands (so no teeth, feet, bum, etc.) while wearing heavy winter gloves

. You can see this game in action in my kids New Year’s Eve party here!

, or anything else that you could use to toss a ring around.

and have them stand behind a line you create with masking tape.

Players have to toss tiaras from behind the line to try and ring the tiara around the cone or stick. Player must ring three tiaras in the time.

Supplies: Index cards with names of celebrities who were in the news a lot

Write down a list of celebrities who were in the news a lot during the year. If you’re stuck, check out these New Year’s Eve trivia games and just grab the names from each of the games.

and their team must give them clues (no names) to get them to guess the celebrity on their forehead. Once they’ve guessed the celebrity, they can move on.

Player must guess five celebrities correctly in the minute or whoever can get the most correct in a minute.

into a bowl (or cup) on the ground behind the chair. Player must successfully land three ping pong balls into the cup (without it bouncing out) before the time expires.

Supplies: Chocolate kisses, stickers or tape with the word 12:00 on them.

. For this game, lay out 50 chocolate kisses, including the five with the 12:00 on the bottom, on a table with the bottoms facing down.

Player must go through and select one kiss at a time, trying to find one with a 12:00 on the bottom. If it has a 12:00, they are done. If it doesn’t have a 12:00, player must eat the chocolate kiss before choosing another.

Supplies: Balloons, slips of paper with typical resolutions written on them

per player and write a typical resolution on each of the balloons (e.g., lose weight, work less, meal plan, etc.). Player must keep the three balloons in the air for the full minute to win or time how long they keep them up and the person who keeps them up the longest wins.

Fill up 10 boxes with jingle bells

, 10 in one, 9 in one, 8 in one, and so on so every box has a different number of jingle bells in it. Player must shake the boxes and put the boxes in countdown order (10 to 1) based on how many bells they think are in the box – 10 on the left and 1 on the right. Player must finish ordering in a minute and get it correct to win.

If you are playing with multiple teams, first player to get the correct order in the fastest time wins. This game works best with gift boxes

or other boxes that have tops you can just take off so you can reuse them again and again.

Supplies: Items to set up an obstacle course and large hand held mirrors

Set up an obstacle course of objects like cones, toys, confetti poppers, etc. on the ground from one line to another. Player must scoot themselves on a towel from the start line to the finish line going around the objects and then back from the finish to the start line to complete the challenge.

But wait, it’s not that easy. Instead of going forward, player must hold a handheld mirror

and scoot backward using just what they see in their mirror reflection to move.

Player must search through a large bucket

to find letters to spell out Auld Lang Syne before the time runs out (or the quickest). Plastic letters

like these ones on a pedestal or table. Player must bounce (they have to bounce, not roll or throw) ping pong balls

at the table and attempt to knock off all the party hats before the time runs out. Use party hats that are nice and light.

(plastic ones like you might use for some non-alcoholic New Years punch work fine) and give one player a ping pong ball. Or if you’d rather use champagne glasses, you can use small bouncy balls

Players must stand facing one another (can stand as far apart as they’d like) and must make their way from the starting line to the end line by passing the ping pong ball from one person to the other, tossing it (NOT dumping it into the other person’s glass) from one glass and catching it in the other glass.

(No hands allowed except for holding the glass). Players can move as much as they’d like down the path each play but if the ball drops at any point, the team must start over.

Player must use just a New Year’s Eve noisemaker

on their forehead and to win the game, must move the cookie from their forehead to their mouth without using their hands. If a player drops the cookie on the ground, pick it up and try again. If the cookie breaks, get a new cookie and start over.

Attach an empty tissue box (the long rectangle ones like this work best) to panty hose that you can attach to someone’s waist. Fill tissue box with ping pong balls

and tie around someone’s waist (with Kleenex box opening facing out). Similar to the shake your tail feather in this Thanksgiving games post (there’s a video there too!)

Player must shake their booty to get all of the ping pong balls out before the time runs out.

If you like these fun minute to win it games, make sure to check out these other fun New Year’s Eve games! 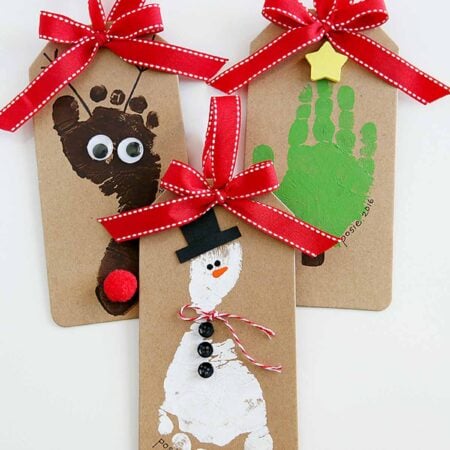 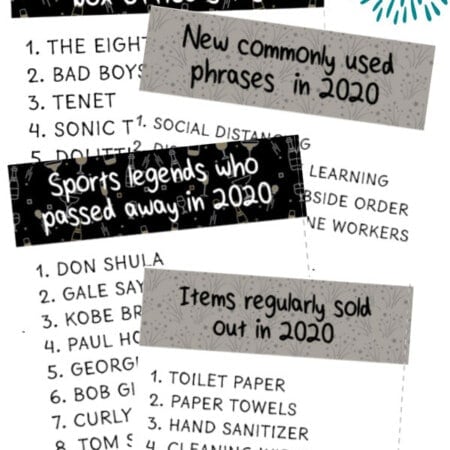