The lights. The smells. The people. As soon as I walked out of my hotel onto the streets of New York City, I was reminded why I keep coming back. There is just something magical about the city that never sleeps and if you’ve never been, find a weekend that you can go and experience something you’ll find nowhere else in the world.

New York City is the perfect destination for a girls getaway weekend, especially if you live in a city like Washington DC or Philly where it’s as easy as jumping on an Amtrak train to head into the city, because there are so many great things to do in NYC.

Some of the my best memories are from trips to New York City with my girlfriends. I went one final time this summer prior to our big move to Texas and even though it’s been a few years since my last visit, I was just as entranced as the last time I’d visited.

I can’t even begin to tell you exactly what to do on a girls weekend in New York City because that deserves an entire blog, not just one blog post.

What I can give you is my recommendation for a handful of must-try New York City experiences you can’t miss, definitely some of the best things to do in NYC. And if you need packing tips, here’s my favorite girls weekend packing list! 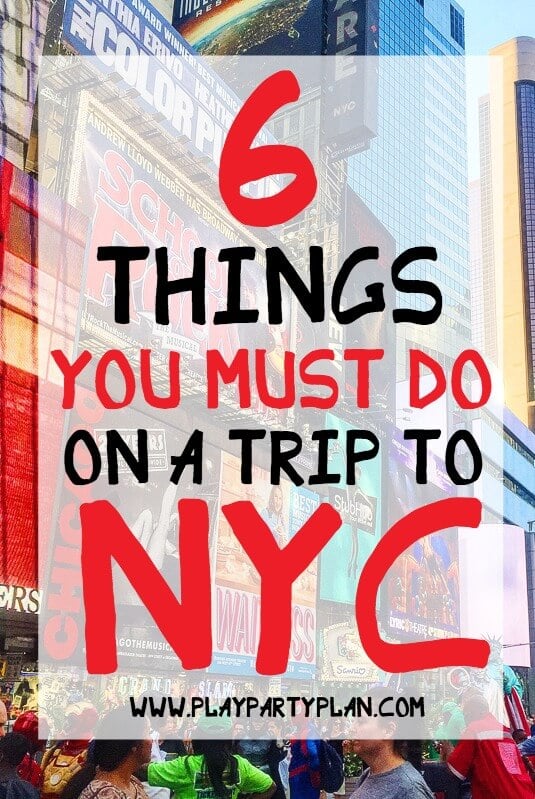 Awesome Things to Do in NYC

#1 – Take a train and upgrade to business class.

On my most recent trip, I took the northeastern Amtrak from Washington DC to New York City. I rode Amtrak on my last visit to NYC when I met Kristi Yamaguchi, but last time I purchased a coach ticket. After riding business class on Amtrak, I’ll never go back.

If you live within a 4-6 hour distance from NYC like I do, riding the train in is a no-brainer. Unlike when you’re flying, you only have to be at the Amtrak station 30 minutes before your train and honestly, you could probably show up a few minutes before and be just fine (but if you miss your train, don’t blame me).

A business class ticket is often only a bit more expensive and allows you to board first, and that alone was worth the cost difference as I saw all of the coach passengers standing in a line that wrapped halfway down the hallway in Union Station. I walked right on by, boarded, and was all settled before anyone else even boarded. 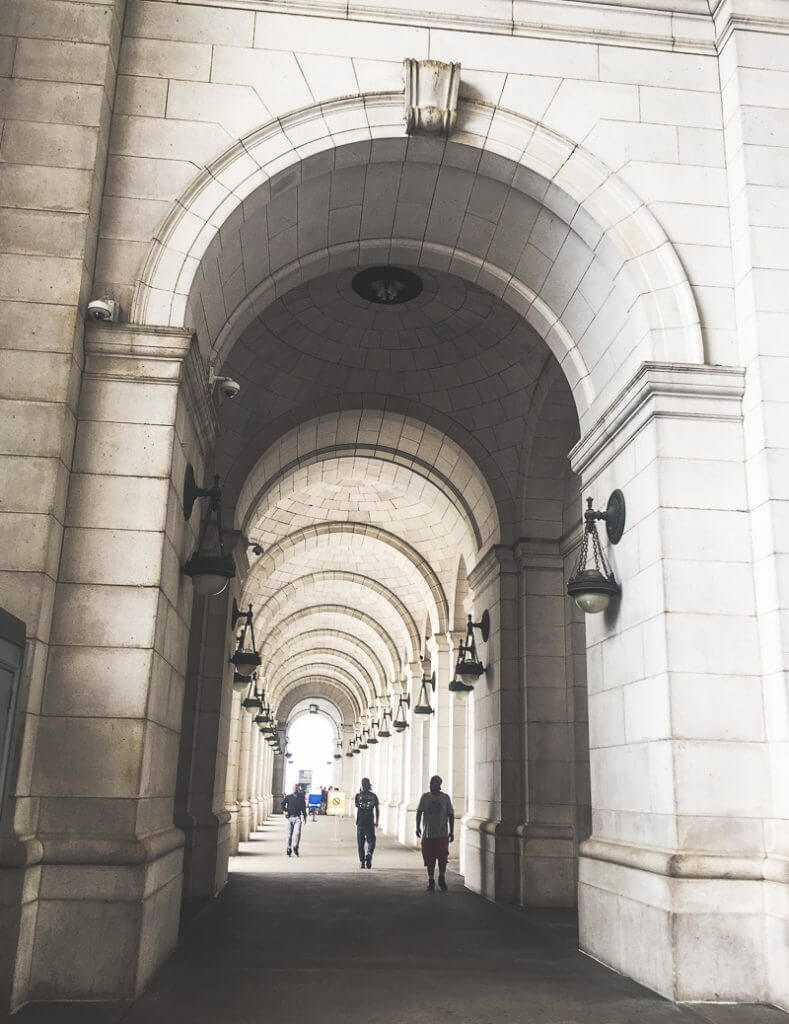 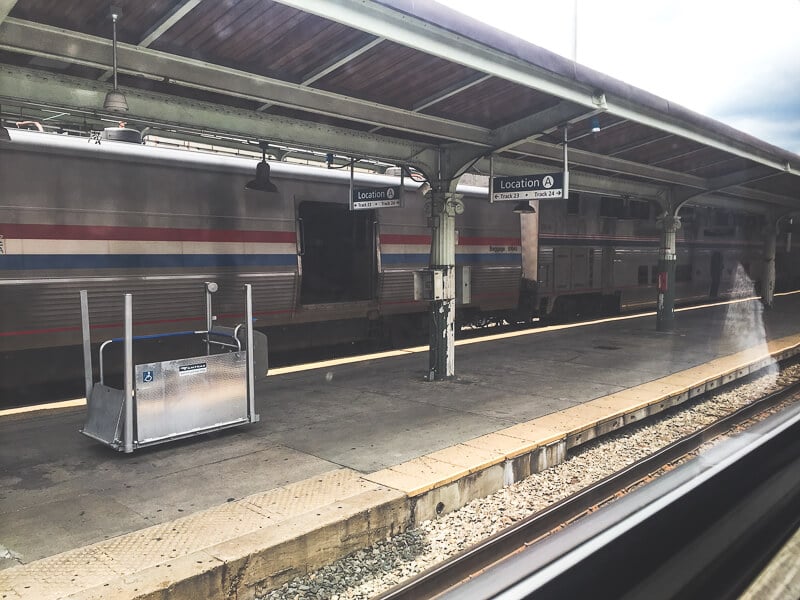 After I hopped on the train, I plugged my computer into the outlets provided with each seat, hooked into the free WiFi, and got nice and comfy in my oversize business class seat. And once we had left the station, I used the bathroom and went to the snack car to pick up the complimentary drink provided for business class passengers.

All within the first 15 minutes of the ride, no taxiing or waiting to hit 18,000 miles necessary. P.S., this is huge for traveling with kids — it’s okay to get up and walk from one end of the train to the other so no one goes crazy being stuck in their seat for hours at a time! 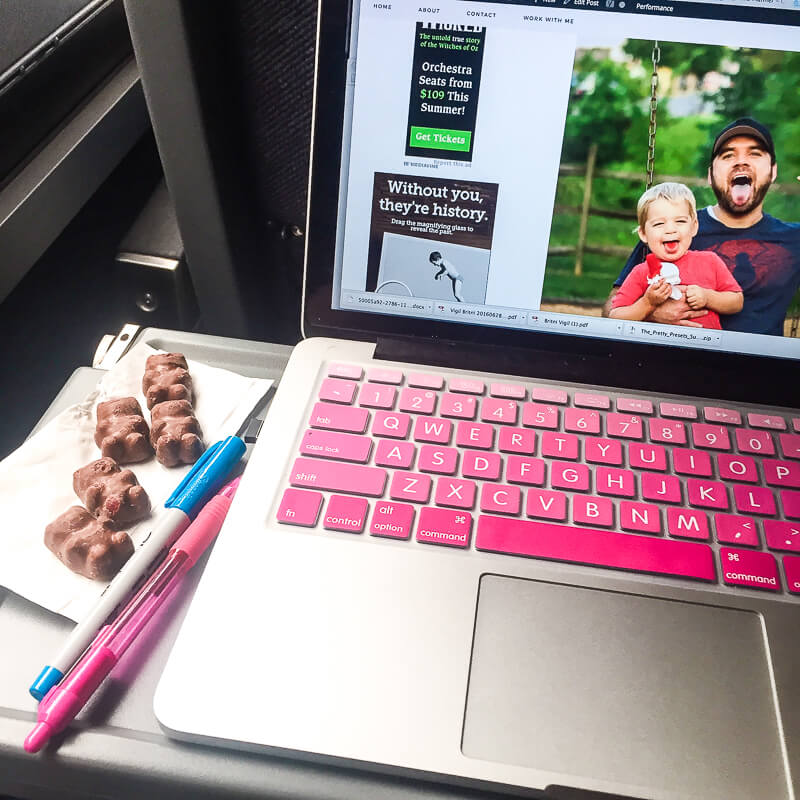 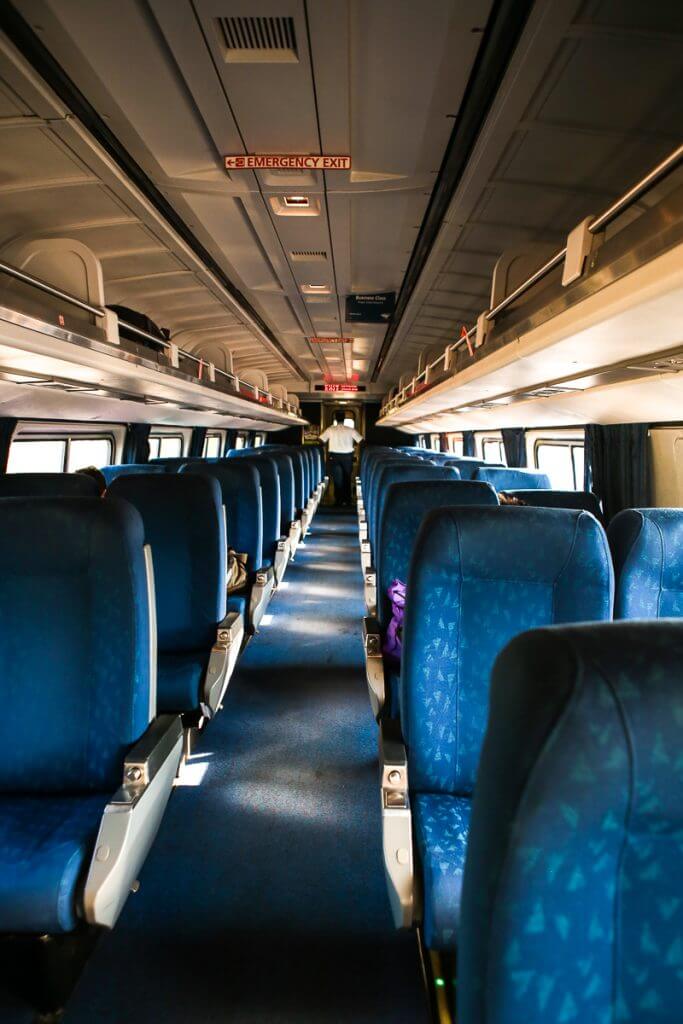 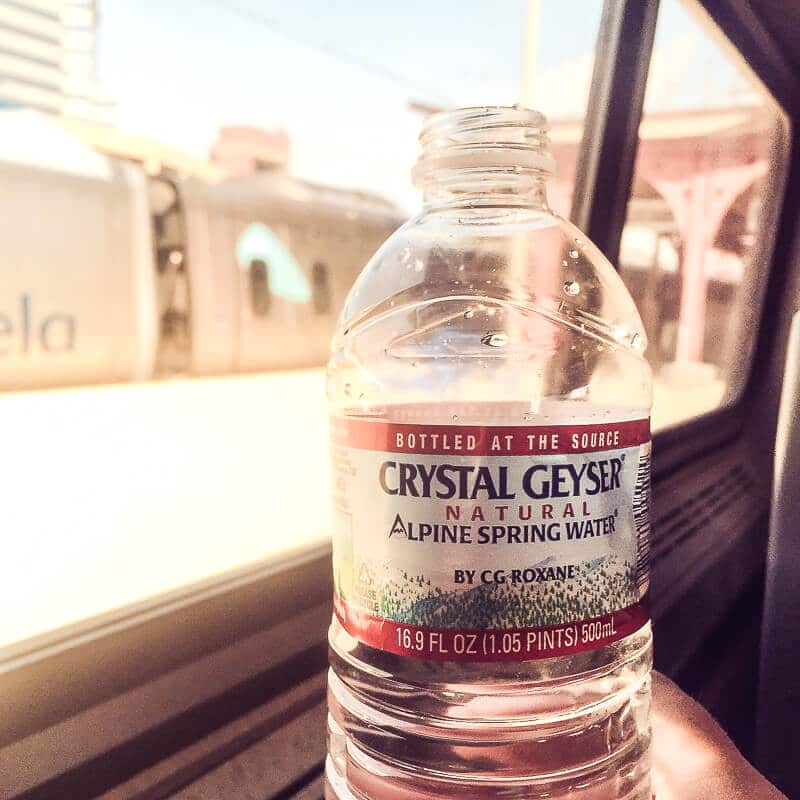 Another perk to riding Amtrak is the scenery. There is just something about rolling along on train tracks, staring out the window as you watch the world go by, world you would never see if you were flying, driving, or riding a bus. Amtrak takes you on a unique adventure that just builds up the excitement heading into The Big Apple. 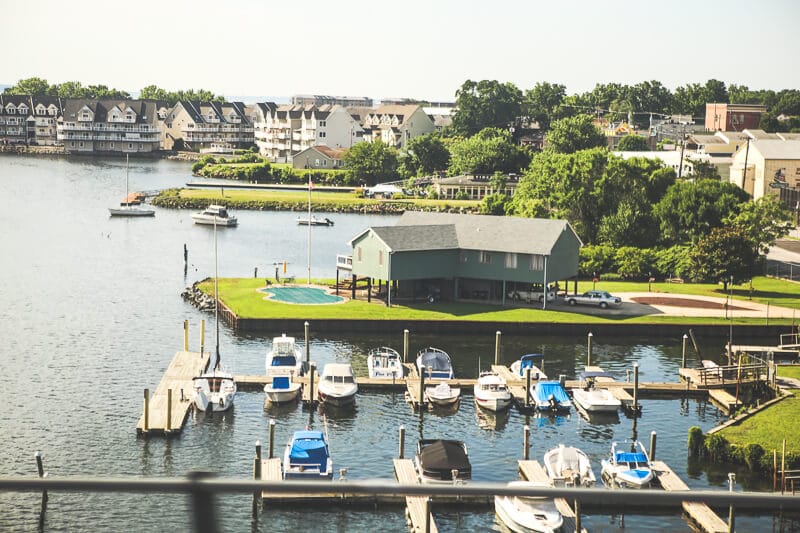 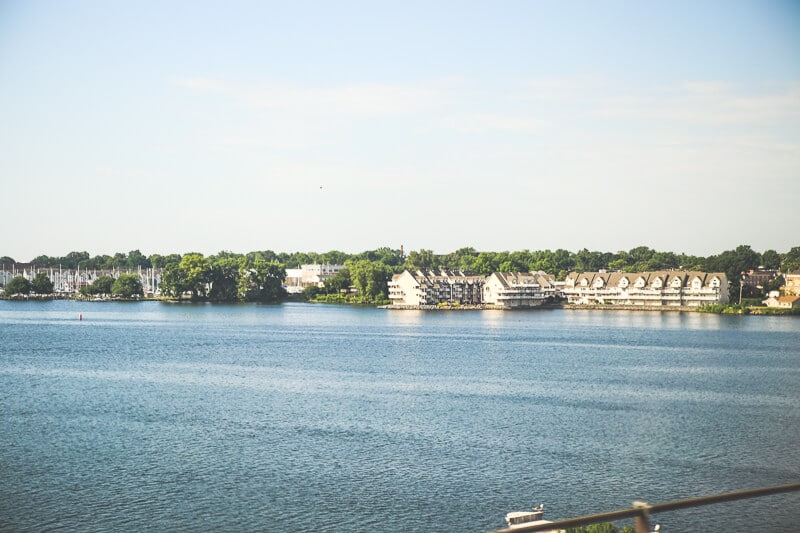 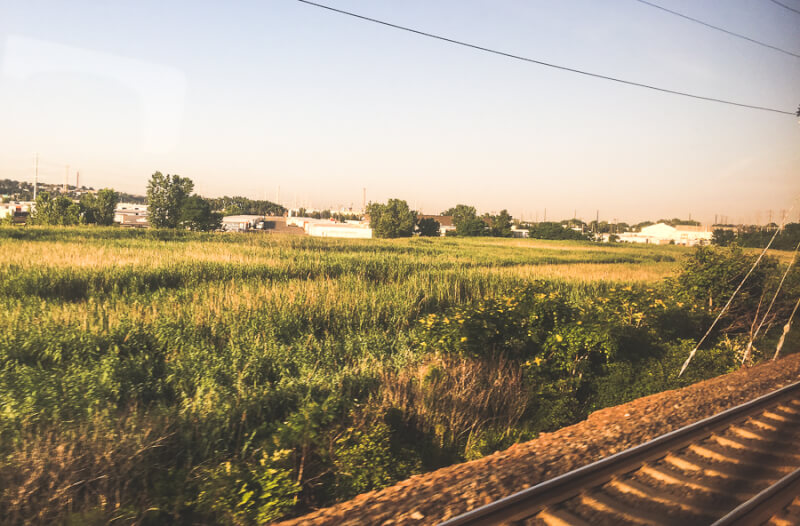 I’ll be the first to admit it, hotels in New York are pricey. BUT if you’re traveling with a bunch of girlfriends and willing to share a room, they can be very doable. Pick a swanky hotel like the brand new Hotel Riu Plaza Times Square and enjoy everything NYC has to offer — art, gorgeous skylines, and diversity. And whatever you do, don’t rent a place in NYC on Craigslist. I’ve been the unfortunate victim of a rental scam and ended up in the city $600 poorer with nowhere to stay.

Hotel Riu Plaza is set in a perfect location, just around the corner from many Broadway shows and just blocks from Times Square. And if you’re only in NYC for a weekend, you don’t want to spend half of that taking a train in and out from New Jersey or one of the neighboring New York boroughs.

Hotel Riu Plaza Times Square is more than just a great location. As soon as you walk in the door, you’ll feel it. The hotel is an extension of New York City and everything I love about New York City. From the modern and colorful designs to the skyline photos lining the halls and the perfectly designed hotel rooms, it really brings the best of New York City into your hotel experience. 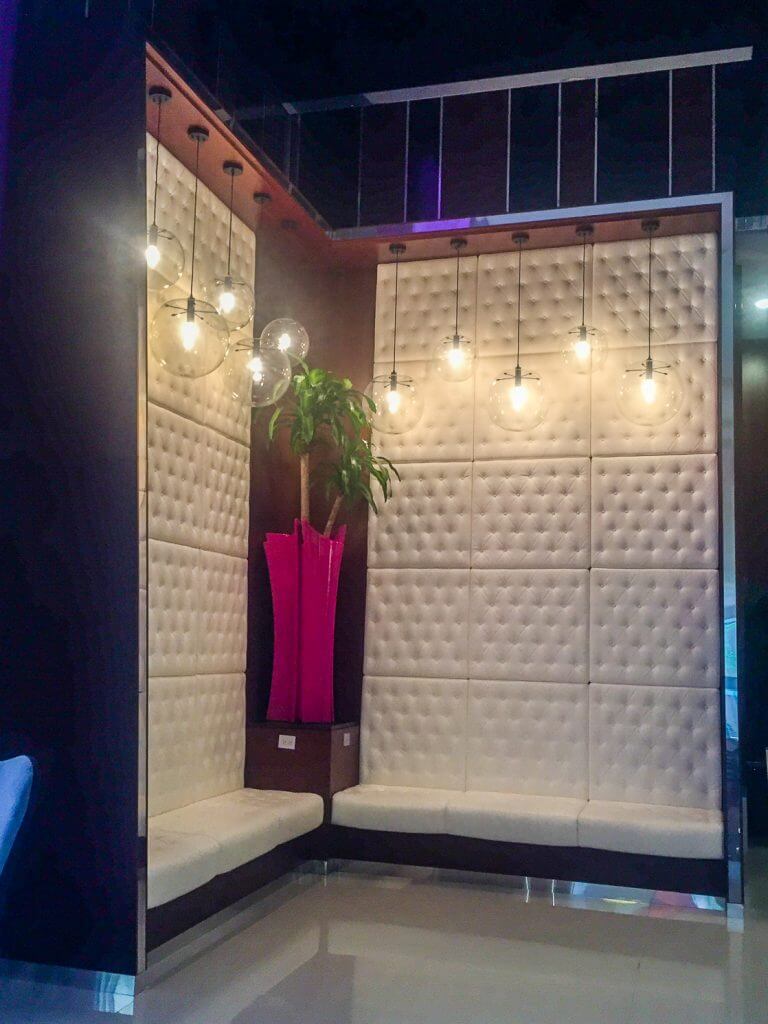 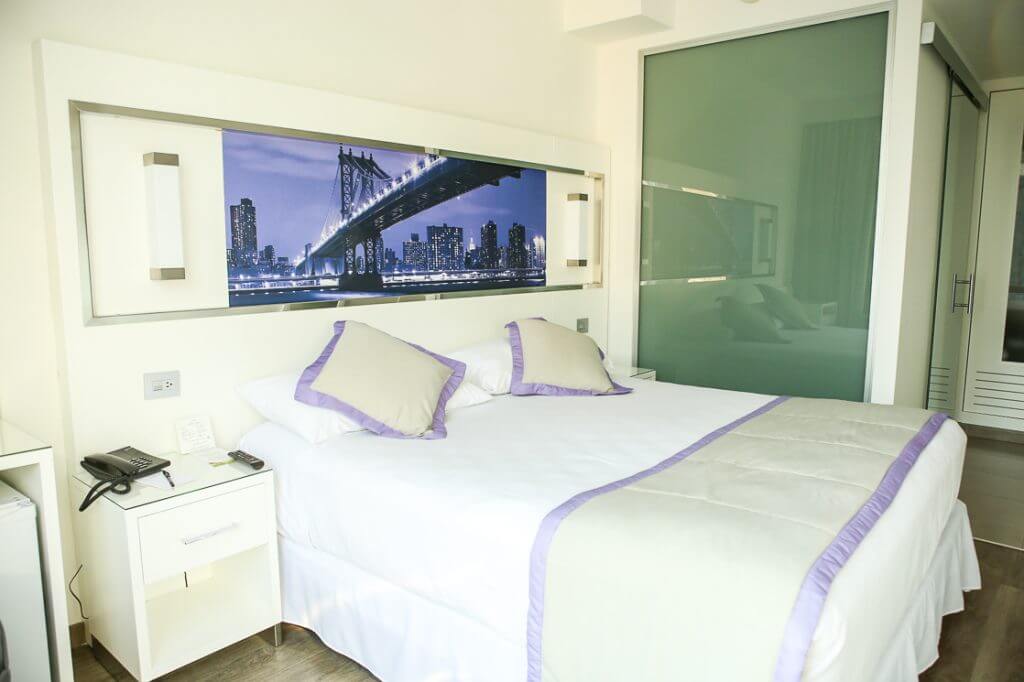 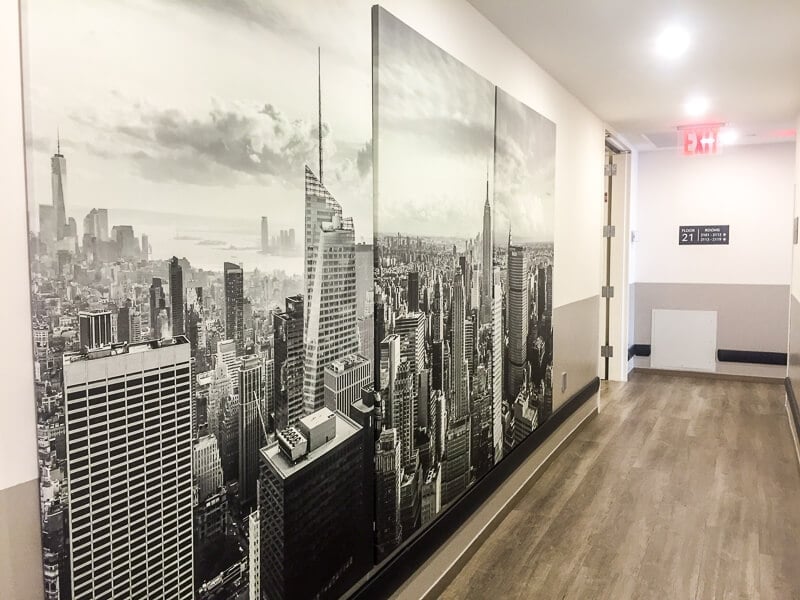 Eat out a lot. And eat a lot of different things. New York City is heaven for a foodie. Grab a hot dog from a street vendor. Walk into a busy pizzeria and walk out with a greasy and delicious piece of pizza you have to fold in half to eat. Enjoy the melting pot that is New York and eat something ethnic. Lather a New York bagel in cream cheese. Eat an infamous black and white cookie. 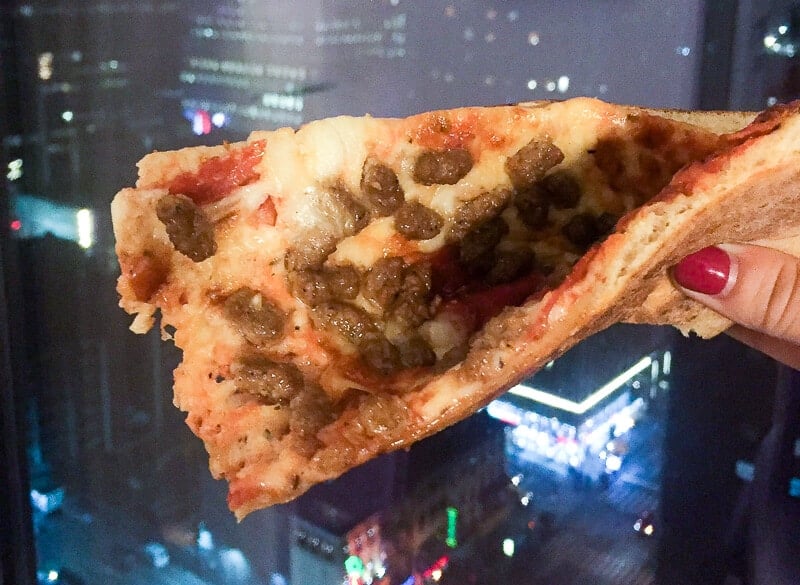 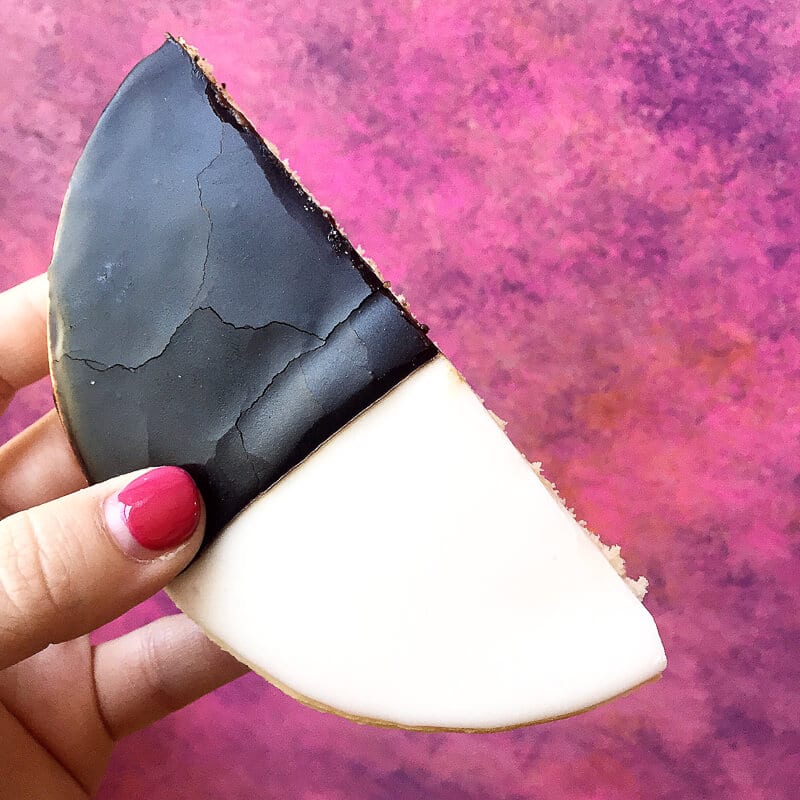 And don’t stop there. One of the best things about a girls getaway is being able to eat wherever you want, without worrying about whether it’s family-friendly. Pick one or ten restaurants that you’d never eat at with kids and go there. Just whatever you do, skip the chains. New York City is a foodie’s paradise, don’t waste your time on something you could get back at home.

I don’t care what show it is. If you want a recommendation, ask your friends on Facebook who know you better than I do and know what you’ll like. There is literally something for everyone.

If you still want a recommendation, I am always a fan of Wicked and Les Miserables. And if you’re with the girls and comfortable with a show that involves a lot of sexual innuendo, Waitress was entertaining, though I’ll admit it didn’t leave me with the completely enthralled and amazed feeling I normally have when I leave the theater.

I probably wouldn’t go see it again and wouldn’t recommend it to my personal friends who are typically conservative like I am, but the jars of pie they sold at the snack bar were a fun treat. That was kind of the highlight of my night. Whatever you do, go see some sort of show. 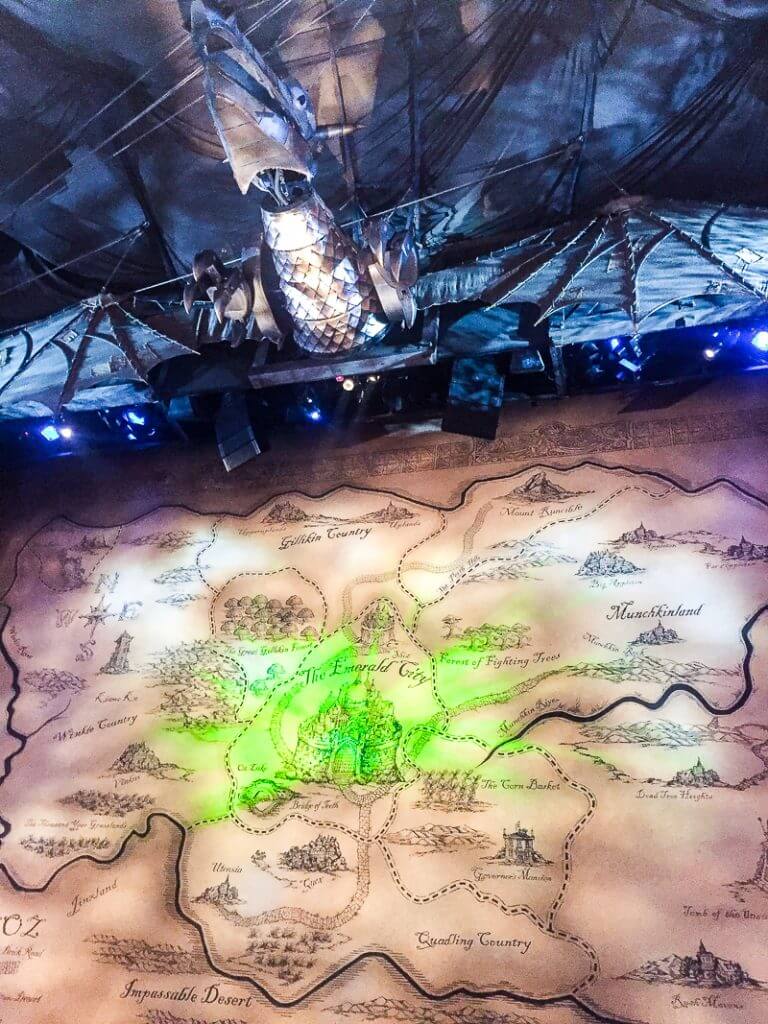 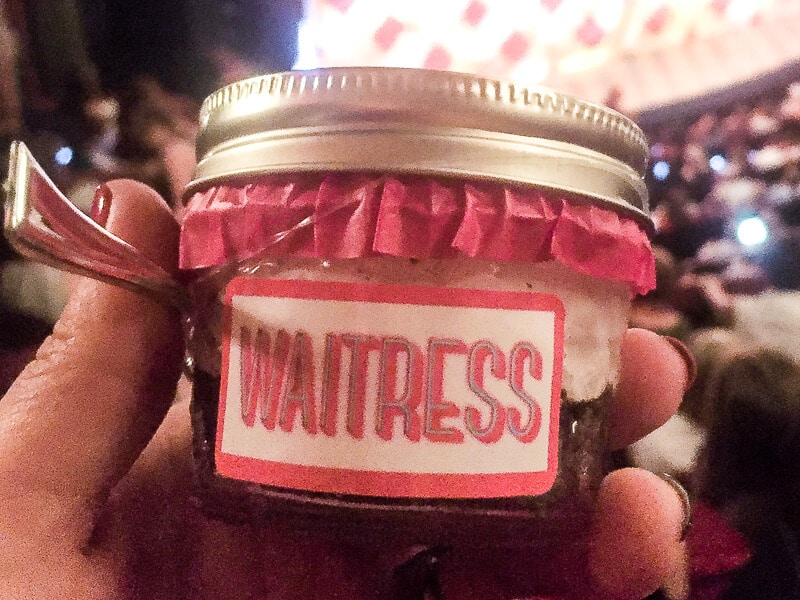 Spend time walking around the city just taking it all in. Walk through Times Squares to be mesmerized by the colors and sounds. (Just ignore the naked women who think that marker is the same as clothing.) Walk down to the pier and glance across the Hudson river.

Walk along side streets and find New York City’s fun personality in the most surprising places. Walk around and watch how local New Yorkers have mastered the art of navigating around tourists who are snapping pictures of everything in site. 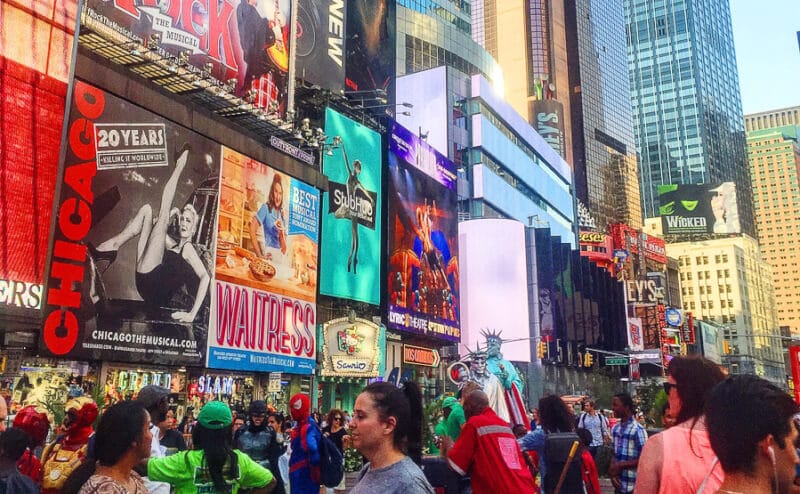 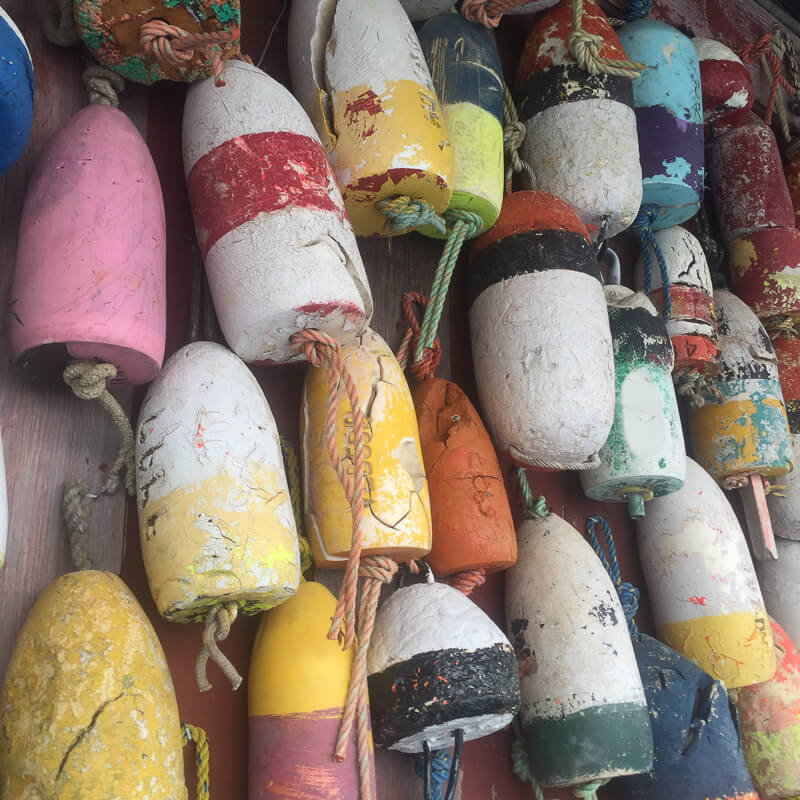 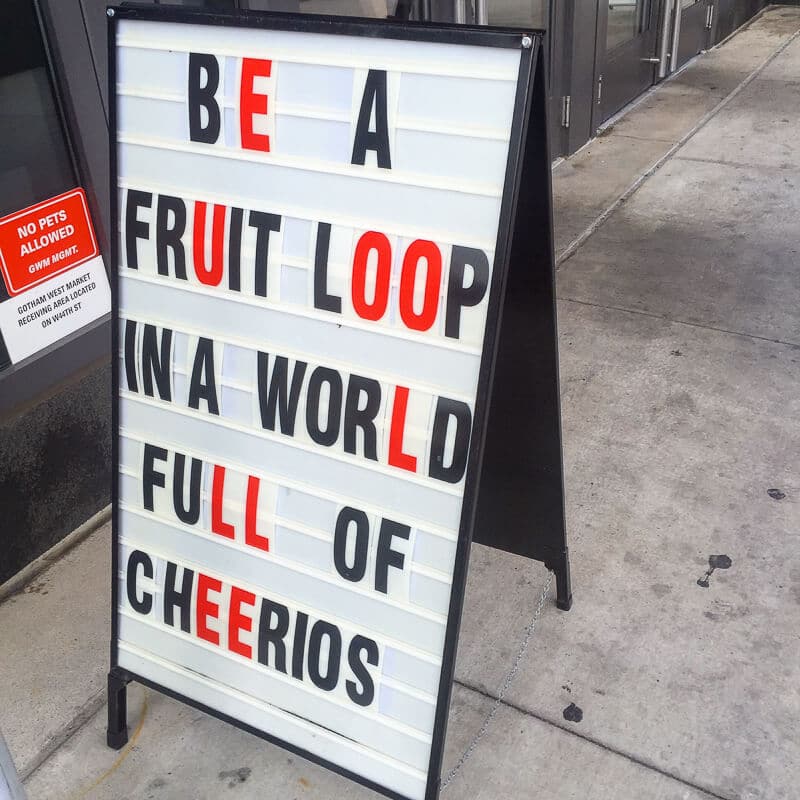 Just like with food, New York City is a mecca for shoppers. From designer fashions to five for $10 I love NYC t-shirts, there’s something for everyone. And I know they say everything is bigger in Texas, but in NYC, everything really is bigger.

The biggest Barnes & Noble I’ve ever seen, an Olive Garden that takes up half of Times Square, a Hershey’s chocolate store where thy have to control the flow of people entering because it gets so crowded. So spend a few hours popping in and out of different stores, window shopping, and picking up souvenirs for your family and friends waiting at home.

I know I barely scratched the surface of things there are to do in New York City. These are just some of my personal favorites and things I’d recommend everyone do at least once. 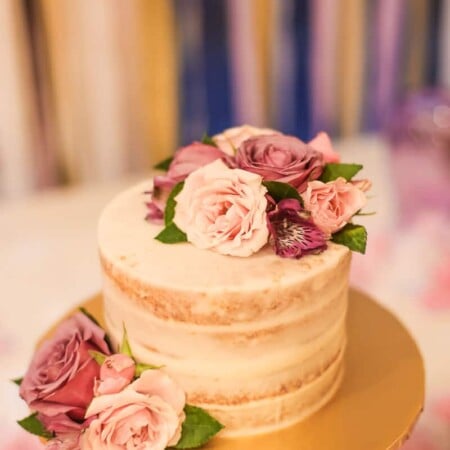