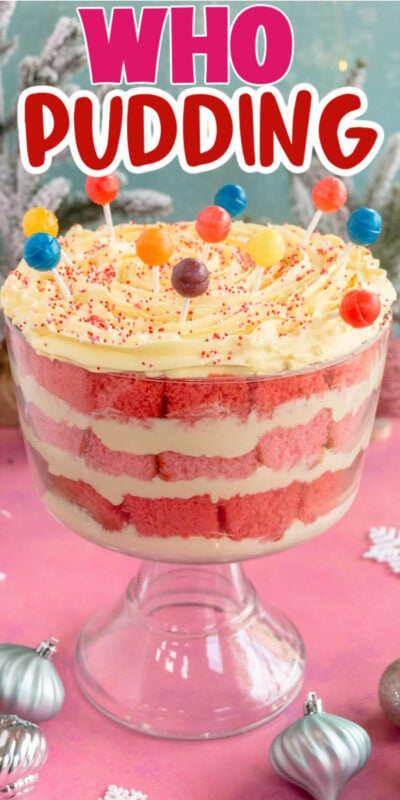 Everyone will love this Who Pudding including every last who down in Whoville plus your family and friends! Cake combined with a pudding filling and a pudding frosting make this Who pudding a Christmas dessert you can’t skip!

If you’ve read the book The Grinch Who Stole Christmas or watched any of the Grinch movies, you’ve probably heard of Who Pudding. It’s one of the three things we know all the whos down in Whoville eat – Who Pudding, Who Hash, and Who Roast Beast.

When I started planning my Grinch party, I knew I had to have Who Pudding, but I couldn’t find a good recipe online so I just decided to make my own.

The only other recipes I could find online were pretty much just green pudding with hearts, kind of like my Grinch brownies.

But here’s the thing. That’s not what Who Pudding looks like. It’s Who pudding, not Grinch pudding.

So I did some research and watched all of the movies and read a couple of variations of the book.

As soon as I saw this version of Who Pudding in the original movie, I knew this was the Who pudding I wanted to make.

I mean doesn’t that just look delicious, like a showstopping holiday dessert? There were other images in other movies that were similar, maybe just not quite the same color, but this was it.

This was the Who pudding I made and let me tell you, I was a little nervous about how it would all come together, but it was delicious.

I did an entire Who Feast and the Who pudding was by far the favorite of the entire meal, even over the Who Roast Beast.

Serve this with some other Grinch goodies like Grinch cookies and Grinch cupcakes for the ultimate Whoville dessert spread!

How to Make Who Pudding

Okay so there are going to be four steps to making this Who pudding – making the cake, making the pudding filling, making the frosting, and putting it together.

None of them are difficult and none of them take a long time so you can really have this ready to go in just a few minutes past the time it takes to bake a box cake.

Start by preheating your oven according to the directions on the box for a 9×13 cake. Then you’re going to line two 9×13 cake pans with parchment paper. This isn’t absolutely essential, but I find it to be really helpful.

Then mix the two sets of cake batter according to the package directions. Make sure to do two separate bowls, one cake mix plus ingredients in each, because you’ll need one pink and one red cake.

Pour the red cake into one of the prepared baking dishes and pink cake into the other.

Bake in the oven according to the package directions then allow the cakes to cool in the pan.

Once they’re cooled enough to handle, pull the parchment paper out and cut the cakes into small bite-sized squares, the smaller the better – just don’t cut so small that they totally fall apart.

While the cake is baking, you’re going to make the pudding filling that I used in this Oreo dirt cake.

All you have to do is mix the cream cheese until smooth with a mixer then add two boxes of instant pudding mix and two cups of milk to the mixture. Beat it until you get a nice creamy pudding mixture.

Finish it off by adding one small tub (eight ounces) of Cool Whip and beating it in until it’s light and fluffy.

Set that aside while you make the frosting.

The top layer of the who pudding is a soft and fluffy pudding frosting, similar to the one I used one my pumpkin cupcakes. Technically you could just use another layer of the pudding filing on top of the cake, but I really like the combination of the frosting, pudding filling, and cake together.

Totally up to you though.

To make the frosting, combine the heavy whipping cream, powdered sugar, and pudding mix and beat until the frosting is thick and fluffy. Don’t over mix.

Put the frosting into a piping bag (use my viral TikTok tip for this!) and set it aside.

4 – Make the Who Pudding

You can either make this in a trifle dish like I did or just make it in a regular bowl (tougher but still doable).

To make the who pudding, put down 1/3 of the pudding filling down into a trifle bowl.

On top of that, add about 1/2 of your red cake squares. Like in the picture, we want to have two smaller layers of red cake and a larger layer in the middle of the pink cake.

Top that with the remaining 1/2 of the red cake squares then finish the layers off by piping a layer of the pudding frosting on top of the red squares.

Add some sprinkles if you want and place Dum-Dums randomly coming out of the top. You can skip the Dum-Dums, but I love the fun and whimsical touch it gives the Who pudding, plus it makes it better resemble the movie pudding!

And that’s it! Keep refrigerated until you’re ready to serve then serve with a large spoon and dig down deep to make sure everyone gets a bit of everything in their serving!

You can either hand out the Dum-Dums for people to eat or just remove them before serving, totally up to you!

Wipe down the edges of the trifle bowl as you go if you get pudding on them to keep the outside clean. This will give you a nice clean look to the pudding once it’s done.

Store in the refrigerator covered with plastic wrap for up to three days before throwing away. This does not freeze well.

What is Who Pudding?

Who pudding is the Christmas feast dessert mentioned in the book The Grinch Who Stole Christmas.

Can you use other types of cake?

White cake mix works best because it’s the easier to get the bright colors you want, but you could totally make with this with any type of cake you want. This red velvet cake recipe would be great for the red layer.

If you like this Who pudding, you’ll love these other yummy Christmas desserts!

A delicious Who pudding recipe inspired by the Grinch Who Stole Christmas! Layers of cake, pudding, and frosting combine for one whimsical and decadent dessert.

Wipe down the edges of the trifle bowl as you go if you get pudding on them to keep the outside clean. This will give you a nice clean look to the pudding once it’s done. Store in the refrigerator covered with plastic wrap for up to three days before throwing away. This does not freeze well. 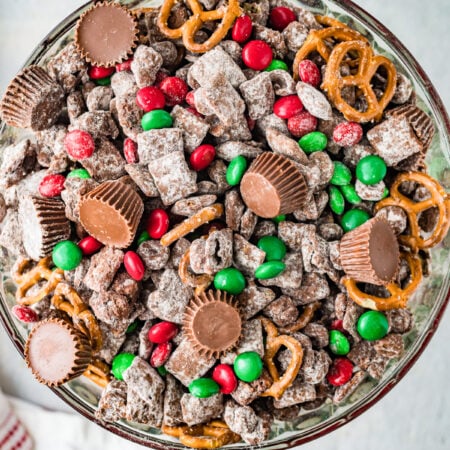 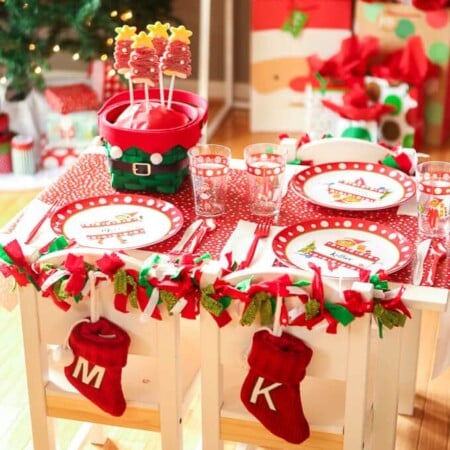