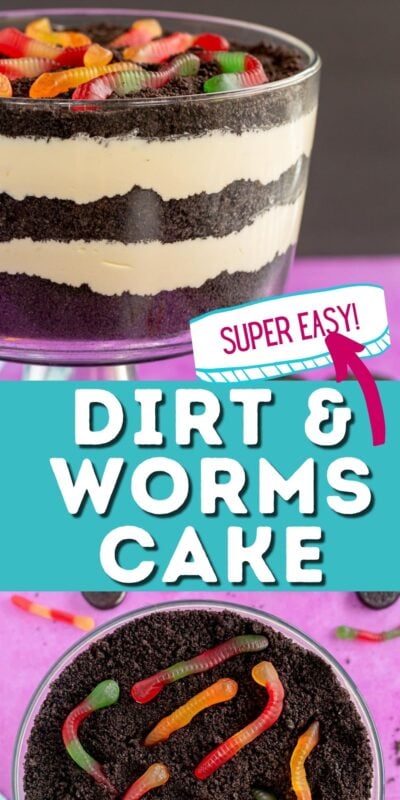 This fun Oreo dirt cake combines Oreos, pudding, and of course worms to make this the ultimate dirt and worms dessert! Serve this up for a fun summer dessert, spooky Halloween treat, or really anytime you’re just craving something sweet!

There’s this one restaurant we go to in our local area that has my son’s absolute favorite dessert ever – dirt and worms. We’ve all had it before – pudding, crushed up Oreos, and gummy worms.

My son gets it without the pudding but the idea is the same – there’s just something about eating dirt and worms that’s fun.

This Oreo dirt cake makes it not only fun to eat but also delicious with the addition of layers of a pudding filling to go with the Oreo crumbs!

And of course, it’s all topped with gummy worms because what’s an Oreo dirt cake without worms!?!

If you want to make this for Halloween, you could make it even spookier by adding some candy tombstones, gummy body parts (like the ones in my Halloween punch), or anything else to make it a little more Halloween ish. It’d be kind of like my dig your own grave dessert bar!

You could even add some food coloring to the pudding like I did with this candy corn layered pudding dessert to go all the way Halloween!

Or just eat it as is, which is yummy!

How to Make an Oreo Dirt Cake

Okay the first thing you need to do is put all of those Oreos into a food processor and pulse until they become Oreos crumbs. I recommend pulsing the cookies rather than just letting it process so that you can still have some small chunks in the mixture. You want larger crumbs, not fine ones like you would with these Oreo truffles.

If you have a smaller food processor, do this in batches and remove the Oreo crumbs between batches rather than just trying to add more cookies to the processor. You’ll get the crumbs you’re looking for quicker that way.

Next you’re going to place the cream cheese in a bowl and cream it with a hand mixer (or with a stand mixer) until smooth.

Mix that until well combined. This will be the base of your pudding layers.

Finish it off by folding in the Cool Whip until it’s completely combined with the pudding layer. You want it to be one smooth and creamy mixture without being able to see streaks of the Cool Whip in it.

Add a layer of the Oreo crumbs (dirt) to the bottom of a trifle bowl (or a glass baking dish or individual glasses). Then top it with a layer of the pudding mixture. Continue layering until you run out of the mixtures, making sure to start and end with the dirt.

Top the cake with all sorts of gummy worms (you could actually put gummy worms in every dirt layer of the cake), making them look like they’re climbing out of the dirt!

Add gummy worms to the internal layers of dirt for some surprise treats throughout the cake.

Make the pudding layer up to a day ahead of time. Refrigerate until ready to use then just layer the cake together right before serving.

Store in the refrigerator for up to three days. After three days the Oreo crumbs tend to get a little soggy.

What is dirt and worms?

Dirt and worms is a yummy dessert that combines Oreo crumbs (dirt) and gummy worms, often times with pudding to create a layered effect like the earth.

What else goes with Oreo dirt cake?

Along with gummy worms, you can also add little candy pumpkins, candy tombstones, gummy body parts, jelly beans, or anything else you might find in the dirt.

If you like Oreos, you’ll love these other yummy Oreo inspired recipes!

This fun Oreo dirt cake combines Oreos, pudding, and of course worms to make this the ultimate dirt and worms dessert! 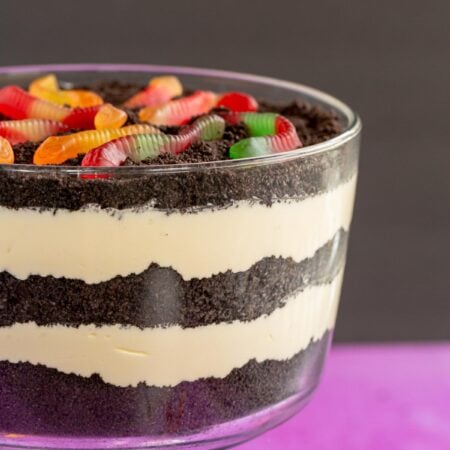 Add gummy worms to the internal layers of dirt for some surprise treats throughout the cake. Make the pudding layer up to a day ahead of time. Refrigerate until ready to use then just layer the cake together right before serving. Store in the refrigerator for up to three days. After three days the Oreo crumbs tend to get a little soggy. 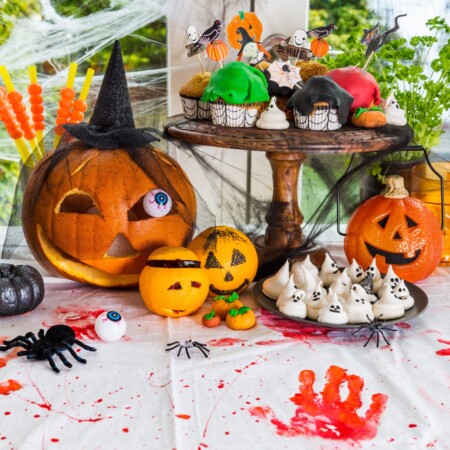 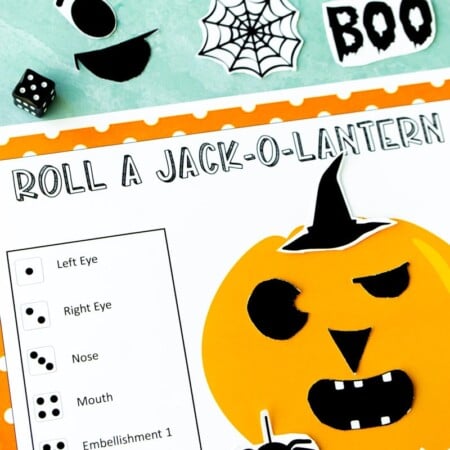