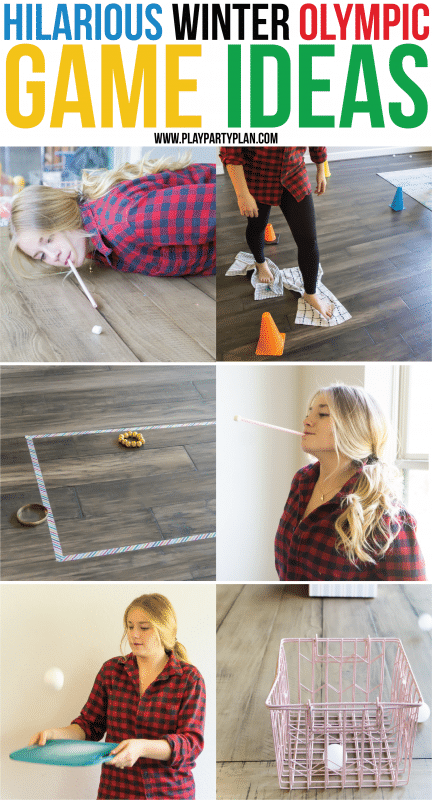 Celebrate the upcoming Winter Olympic Games with these great Olympic themed party games! They’re fun for all ages, themed after the most popular Winter Olympic events, and use things you can most likely find in your house! They’re perfect for any type of opening night watch party or just to get people excited for the two week worldwide celebration!

I can thank my dad for my love of the Olympics. He’s had a healthy obsession with the Olympics for as long as I can remember. We even went on a big family trip and skipped a week of school my senior year of high school so we could actually go to some of the events at the Salt Lake Olympics in 2002! It was one of the coolest experiences ever, and I’ve been a bit obsessed with the Olympics as well since then!

When the last Summer Olympics happened in 2016, I put together these go for the gold party games that were mostly themed after my favorite Summer Olympic events! And I came up with the cutest ideas for “medals” for the winners!

With the Winter Olympics coming up next month, I thought it was only fair to put together some awesome Winter Olympic Themed Party games as well based on some of the most popular Winter Olympic sports. If there’s a sport missing that you personally love, leave me a comment, and I’m sure I can come up with a game to go with it!

How to Play These Olympic Themed Party Games

All of these games are Minute to Win It style Olympic themed party games and depending on the number of people at the party, there are three different ways you can play them. You choose. No matter which way you choose, I guarantee they’ll still be fun. I deliberately made games that both kids and adults can play and enjoy. We played these with my sister, brother-in-law, and my 4-year-old who’s a bit obsessed with minute to win it games after we tried out all of these superhero party games with him!

In this version, one player will be trying to beat the clock for each game. So for instance, they will have to try and finish the task in a minute. If they do, they win a prize. If not, let someone else have a shot. If you go with this style, I recommend choosing a different person for each game.

In this style, you’ll pick two players for each game who will going head to head against each other playing a game rather than trying to beat the clock. So for instance, you’d give two people a bucket full of ping pong balls (preferably different colors) and see who can get them over the ramp first.

The first person to finish wins the prize. Again, rotate through pairs for each game, repeating players as necessary.

In this style, you’ll split your group into two (or 3 or 10 depending on the number of guests) teams. For each game, teams must choose one player to compete head to head in the game with the other teams. The entire team won’t be competing, just one person from each team at a time.

First team to finish gets five points, second gets three, and etc. This works best if you have quite a few people and is a good way to get everyone involved cheering for their team.

If you’re planning on doing either head to head or a team competition, it’s easiest if you keep score for each of the games where everyone can see. I’ve created a free printable scorecard that you can use or you can just make your own.

There’s a version (as pictured below) with the actual game names and a version that’s totally blank in case you want to add your own games or only want to use a couple of the ones from this post. 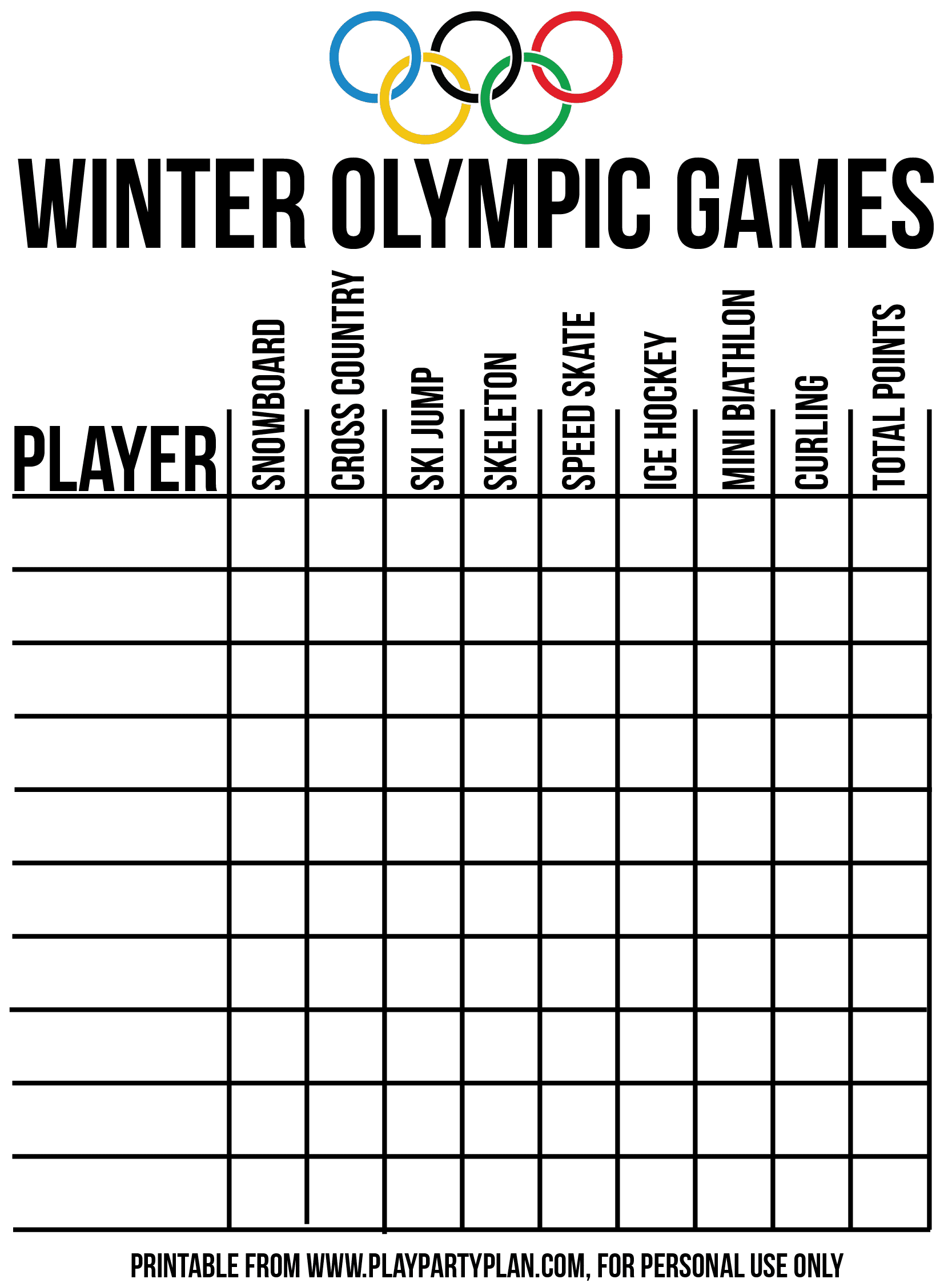 One of the best things about minute to win it style games is that most often they use things that you already have around your house. That being said, here’s a full list of all of the supplies you need to play these Winter Olympic themed party games just in case you don’t stock ping pong balls or mini marshmallows!

I’ve put together step by step instructions for each of these games below. If you have questions about something or need clarification, just leave me a comment, and I’ll do my best to answer. And if you happen to play these games and take a picture of video, I’d love to see it and share! I love it when people use my games!

Give each player a fake snowball and a cutting board. Place a bucket, trash can, or other container of some sort at the opposite end of the room. Players must bounce the snowball on their cutting board from one side of the room to the other and get it to drop in the bucket.

If they drop it on their way to the other side of the room, they have to pick it up and go back to the starting line. If they stop bouncing the snowball and just let it sit on their cutting board, same thing – go back to start.

First player to successfully get the snowball from one side of the room and into the bucket on the other side by bouncing it on their cutting board wins.

First player to successfully get one Oreo in each of the continents wins. If you’re playing with multiple teams at once, use Oreos with different fillings.

Place a bucket or box on one side of a table and place a bucket of ping pong balls on the other side of the table. In the middle, create a small ramp using a box + piece of poster board or whatever else you have at home that will allow you to create a ski ramp. Make sure it is stable though so when people are rolling ping pong balls up the ramp, the ramp doesn’t collapse.

To play, players must roll ping pong balls over the ramp and try to get it to land in the bucket at the other side of the table. If you don’t have a table that will be long enough for this, you could also set the game up on the ground.

Cut up a paper skeleton and spread it out on the ground around a large room. Here’s a big skeleton template you could print or you can use this one if you want a small one instead.

First player to successfully gather all pieces of their skeleton and put it together wins.

Place plastic traffic cones in a circle around a room and give each player two kitchen towels.

To play, players must start at one end of the circle and using the kitchen towels, skate around the plastic cone circle, going in between each and every plastic cone.

First player to get around the circle skating wins. If they miss any of the cones, they have to go back and go through the cone they missed.

Set up a goal on one side of a table using an empty tissue box that has the middle flap ripped out. Either tape the box to the table or weight it down with something so it won’t move. If you don’t have a tissue box, you could use something else but make sure it’s fairly small so it’s not too easy.

First player to score a goal with their ice cube wins.

Just like the Biathlon event, this is a two part game that players have to finish both parts to win. Set up a bucket of mini marshmallows on one side of a table along with a plastic straw. On the other side of the table, use washi tape or painter’s tape to tape a “finish line,” about six inches from the end of the table.

About six feet from the end of the table with the tape, set up another box or bucket with a pretty wide opening (a smaller opening will work, it’ll just make this game a lot harder).

Alternately, you could just have them go through the process five times and for any they make in the bucket, they could get five seconds taken off their time.

Tape a square or a rectangle on one side of a room. On the other side, place a bucket full of cheap plastic bracelets (or use leftover Oreos from the cross-country skiing game above).

First player to land a bracelet on all four sides of the square wins.

Finish off your party with some of these other Olympic party supplies! They’d go perfectly with these Winter Olympic games! 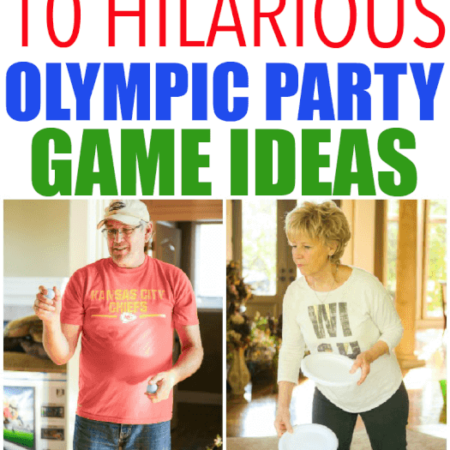 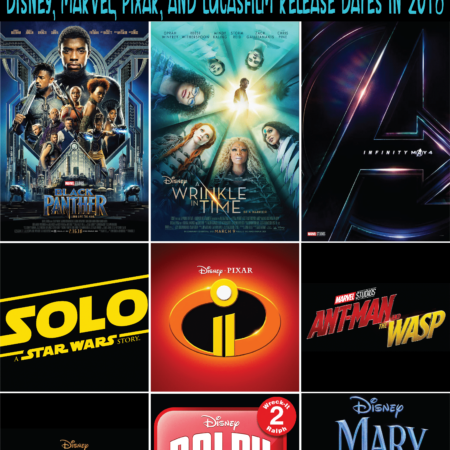