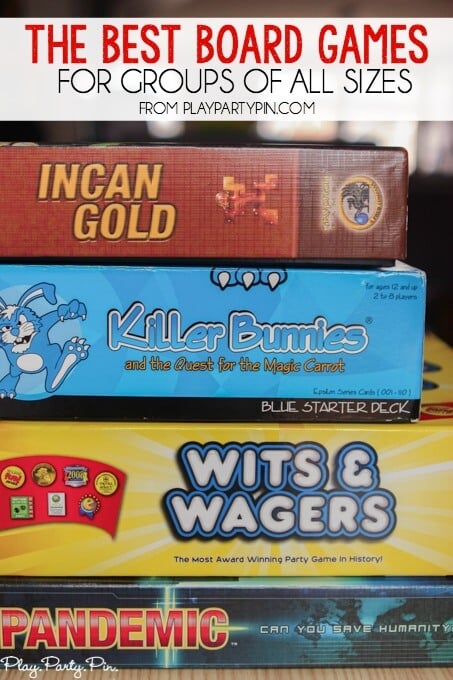 Let me just start with one disclaimer, I use the term board game loosely. A board game in my mind doesn’t have to actually have a board; it just needs to be a game that comes in a box that someone else created for me to play. While most of these have physical boards, some of them are actually card or dice games. It’s my blog, so I count it. 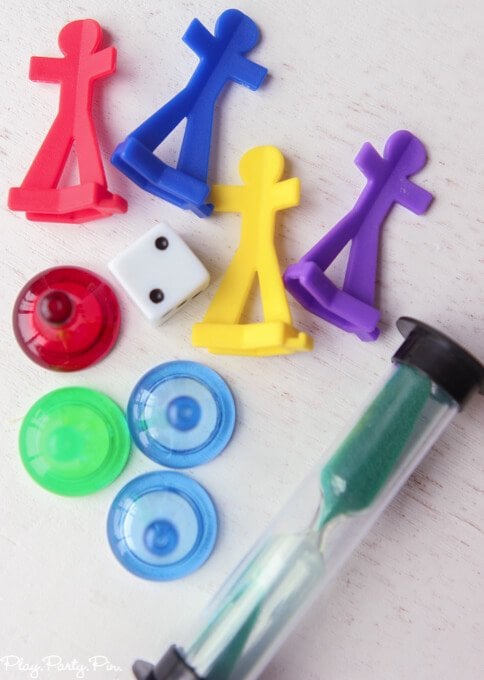 These are 15 of my favorite games for groups of all sizes from big groups for parties to smaller groups for game nights with friends. And yes, even a couple of classic games that we’ve added our own little house rules to kick up the fun and excitement for adults. I’ll tell you why I love the game and who I recommend it for.

If you’re specifically looking for games to play with kids, check out this board games for kids post instead! 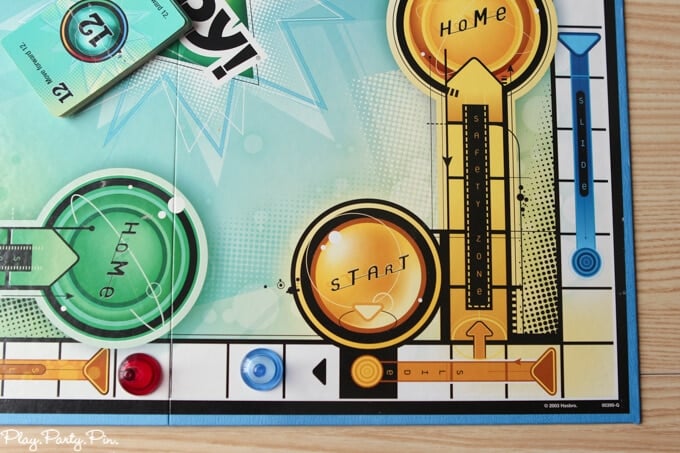 And I’ll apologize now, this list does NOT include Apples to Apples or Cards Against Humanity. I personally hate Apples to Apples, mostly because it was the game we played every single game night for months on end. And I’m a family-friendly board game addict; from what I’ve heard about Cards Against Humanity, I can’t recommend it as a family-friendly board game.

Let’s get started with the games I play the most. These games are great for when you need to play with a big group and you have people that don’t mind being active and maybe even a little crazy. If you have the right group, all three of these games can be absolutely hilarious. They’re also perfect for groups who don’t want to think or strategize much, think late night fun.

Active Board Games for Big Groups

These games are great for big groups that don’t mind getting a little active, crazy, and even at times silly.

Jungle Speed – players have to look at cards and be the first to recognize when a pair of cards matches and to grab a totem out of the middle of the group. Beware, the cards are all REALLY similar, which leads to a lot of laughs and wrong totem grabs.

Catch Phrase – one of my all-time favorite games, players try to get other people to guess a word by describing a word or catch phrase. I have never once played with this game without laughing my head off because in the heat of the moment, it’s pretty hard to get someone to guess the word coil.

Reverse Charades – I actually described the general game in my five awesome games for adults post, but the basic idea is you’re playing charades in reverse. So instead of having one person act while an entire team guesses the word, one person is guessing while the rest of the team is acting out a word. Hilarious.

Board Games for Small Groups

These three games are better for your big groups that want more strategy/thinking and less movement/laughter. They’re also better for smaller groups of up to like 8 players but can be played with as few as four and still be fun.

Wits and Wagers – You break into teams and make wagers on some crazy trivia questions like how many feet are there between here and Jupiter. The goal isn’t to get the answer right, the goal is to be wager on the answers you think are the closest to the correct one.

Imaginiff – See how well you know (or can guess about) the other players. In this game you put everyone’s name on the board and then ask a question about the person whose square you land on, questions like which book would this person be?

Incan Gold – This is a risk and reward type game. People have to decide if they want to stay “in” for the chance of a reward in the face of danger or do they play it safe and pull out for a smaller reward.

Easy Board Games for 2-4 Players

These are some of my favorite easy board games for 2-4 players. These are the games that you can read through the instructions quickly to understand the point of the game and how it’s played. These are all fairly short games as well, which is nice for a date night or group game night because you can typically play more than one game in a night. The games that come with instruction booklets that take as long to read as the game takes to play are in the next section under “gamers.”

Sequence – Draw cards, cover cards on a board trying to be the first one to get four or five in a row, all the while trying to keep other players from doing the same. Kind of like a grown-up version of Connect Four.

Blockus – Similar to Sequence combined with Tetris, in this game each player takes turns placing one of their “blocks” on a board, trying to be the one who can continue playing blocks that connect the longest.

Settlers Dice Game – My husband and I just picked this one up on our trip to Florida a couple of weeks ago, and it’s really fun even just for two players. It’s basically a quick dice version of the game Settlers of Catan. You roll dice, try to get certain combinations, and have to use strategy on which dice you keep (and luck) to gain the most points in the end.

Board Games for “Gamers”

These are the games that I referenced above, you know that ones I’m talking about. They come with an instruction booklet that goes on for days and even when you think you’ve read it all, you have to look up an answer to a question at least ten times during your first game.

You don’t truly get these games the first time you play but that’s okay because these are the games you want to play again and again once you do get them. Beware, they can be addicting, especially Pandemic where you are racing against a “clock.”

Pandemic – Apparently the new thing with games is collaborative, rather than competitive games, which means that the team is working together to race against the clock or against a particular thing to “beat” the game.

In Pandemic, all of the players work together to rid the world of viruses that are traveling the world. Each person has a particular job and talent, so everyone is important and has to really work together to defeat the viruses. If I had to give someone that likes board games one recommendation right now, this would be it.

Killer Bunnies – I don’t even really know how to describe this game because it’s so strange but basically you get cards, you use cards (against yourself and other people), you collect bunnies, you try to protect bunnies from being killed, and then in the end the winner is chosen randomly.

As long as you have one “carrot” (basically a token/point), you have a chance of winning. This game is addicting and has way too many expansion packs that can keep the game from going stale even after playing over and over again.

Agricola – You’ll want to read the instructions over on Amazon for this one but let’s just say it took us a couple of times to figure out how to play this game because the instructions are SO long.

But, if you are a patient person and enjoy strategy games, this one is one of our favorites after you’ve figured out how to play.

Last but not least, these are three of my favorite classic board games that are more fun with alternate rules.

Uno (attack) – Everyone’s played UNO the regular way. When we play UNO, we play that if you have the same card as one that is played, you can play it immediately, out of turn. Then play continues clockwise after the person who played. When you start using multiple decks, this can get CRAZY!

Sorry (adult version) – Sorry has always been one of my favorite games since I played it almost nightly in college.

It’s even more fun if instead of drawing cards randomly from the deck, you deal out cards to the players and let them choose which card to play when. This turns the game into one of strategy and intentional moves rather than random plays.

Compatibility (with your own images) – Perfect with couples or close friends, Compatibility challenges players to go through a deck of images to come up with the image that matches a word/phrase, but the fun part comes in where you have to also try to match what your partner will choose.

Instead of using the cards that come with the game, my family has created our own cards with images so that the game is a little more personal and fun. 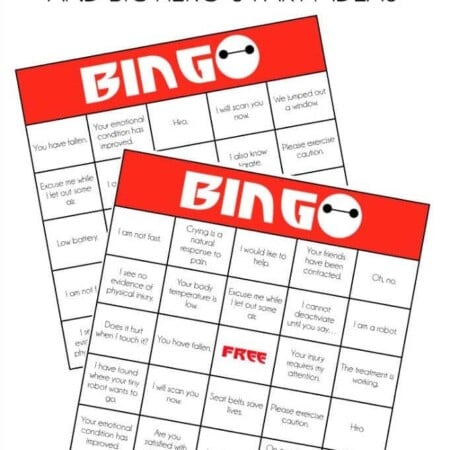 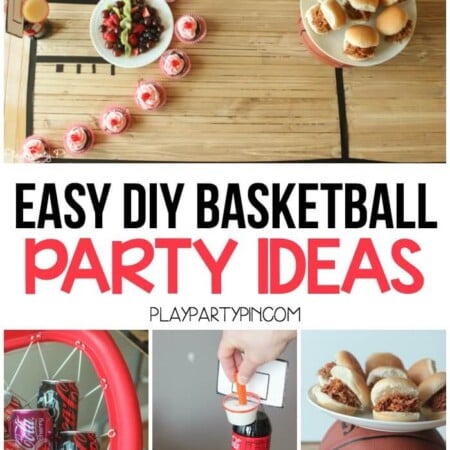