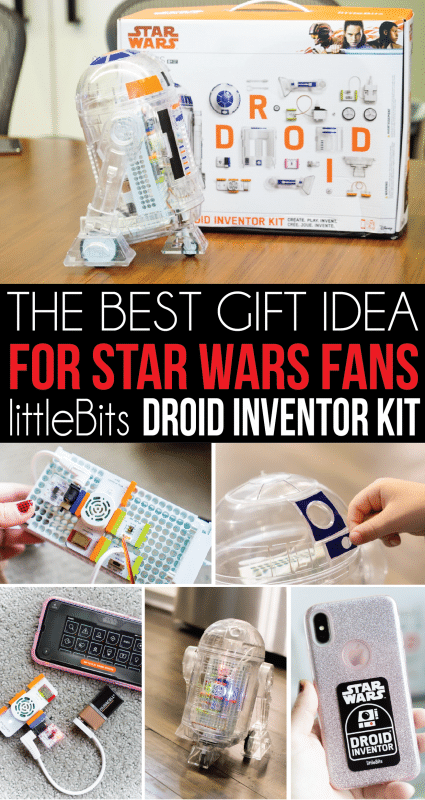 Find out why every Star Wars fan, young and adult, needs a littleBits Droid Inventor Kit in their life! Build your own droid with the kit that’s sure to be a hot holiday gift this year with the release of Star Wars: The Last Jedi! 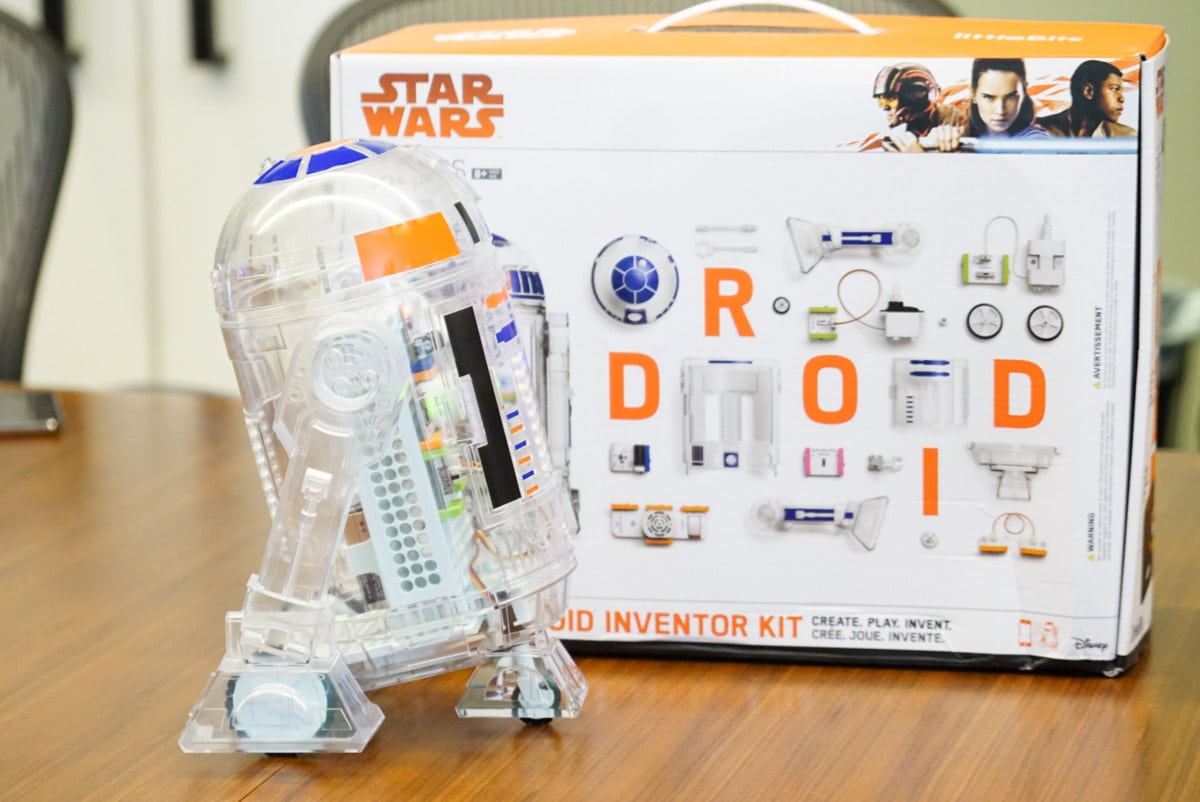 And when I say amazing, it’s not just because I met the team involved – this thing really is amazing and perfect for any Star Wars fan, no matter their age. And for non-Star Wars fans, they have plenty of other awesome kits as well. But really you don’t even have to be a Star Wars fan to like the droid one, it’s that cool.

I had the chance to build a littleBits R2D2 droid with my preschooler as well once we got home from the trip. Totally different experience from building them with 25 other bloggers! While the product is targeted to 8-12 year olds who can do it all on their own, together the two of us were able to have R2D2 completing missions in no time, and my son did most of the work himself!

Once we got to the part where you add the stickers, he decided he cared more about playing with his droid than he did about it looking like R2D2. Sounding like R2D2 was good enough for him I guess. Too bad we didn’t have R2D2 to go with us when he dressed up as Poe Damron for Halloween! 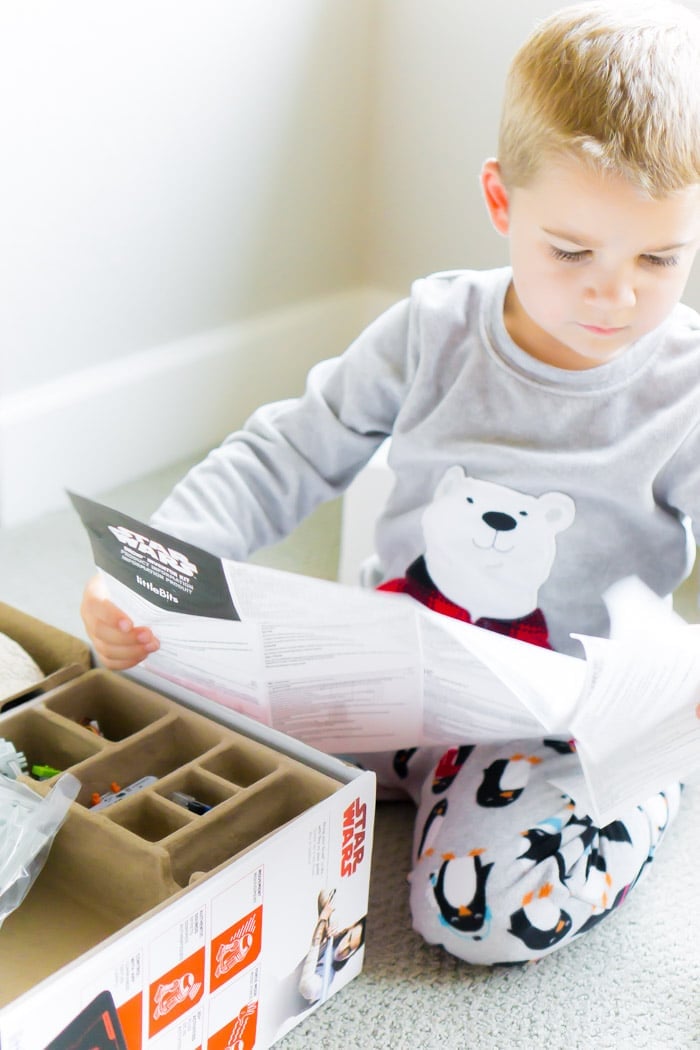 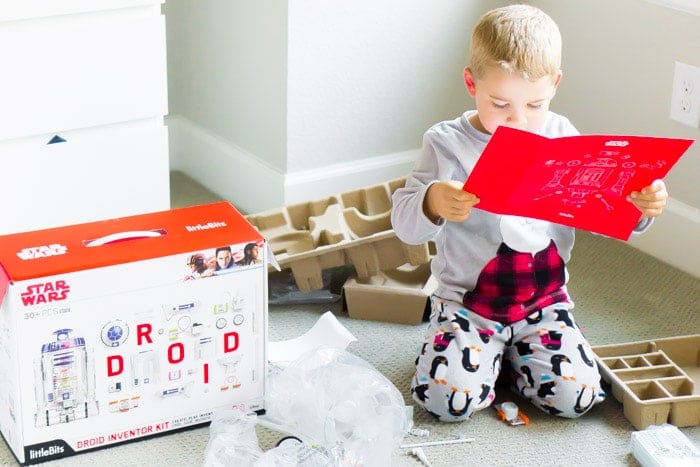 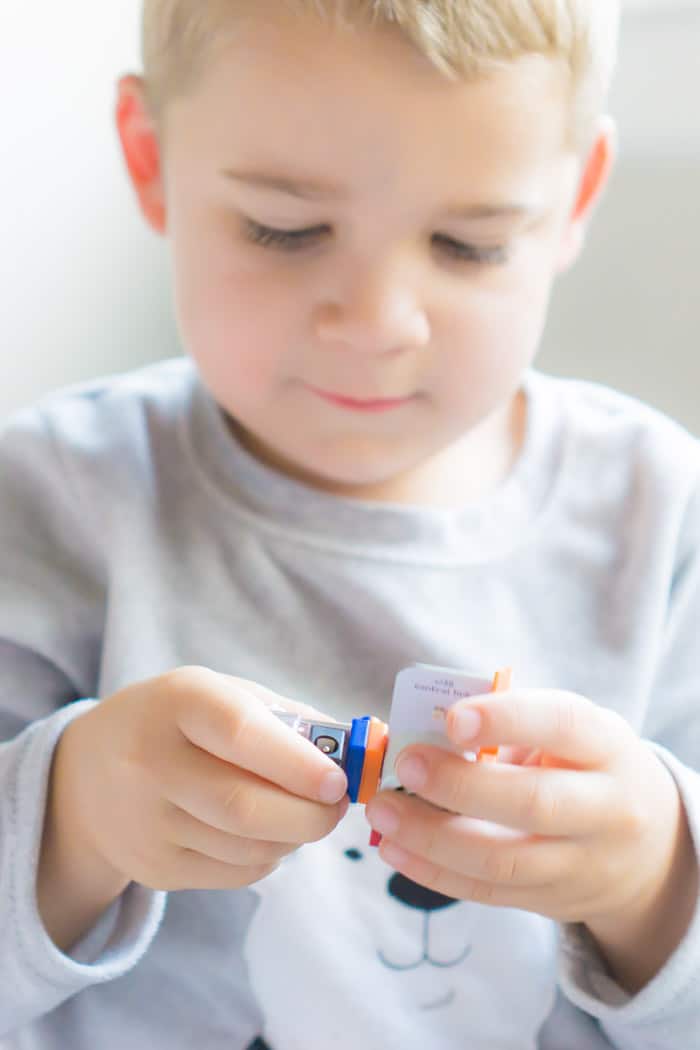 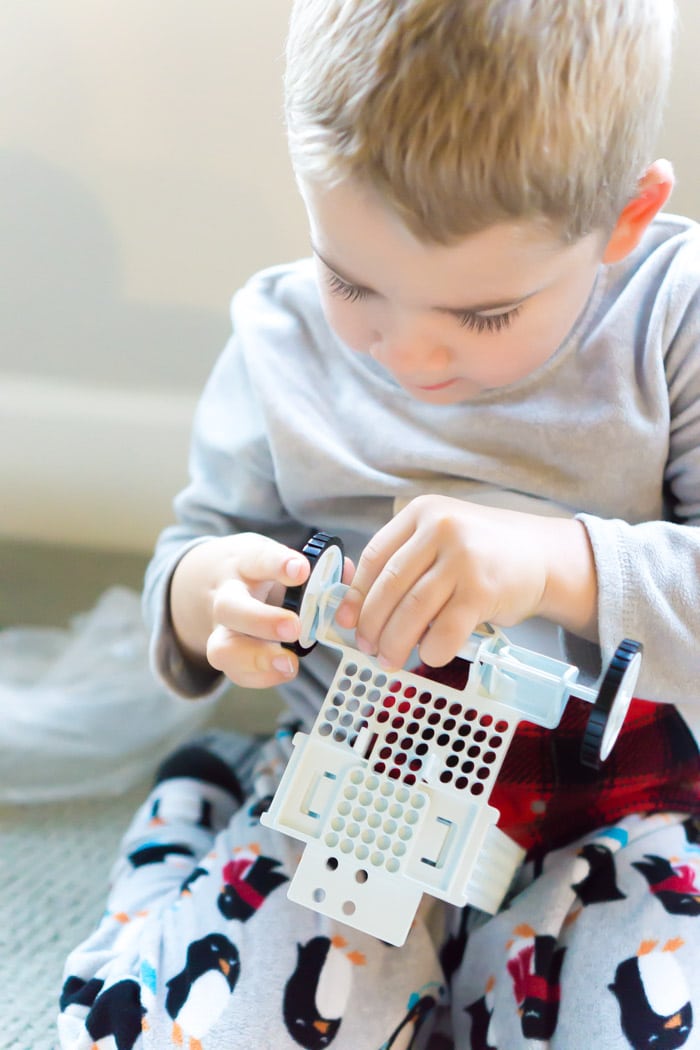 Why Every Star Wars Fan Needs a littleBits Droid Kit

After having the chance to try the littleBits Droid Inventor Kit out by myself and then again with my son, here’s my take on why I think this makes a perfect gift for any Star Wars fan – young or old!

Honestly, I could stop there. You get to build your own droid. That enough makes it a cool gift for anyone who likes Star Wars. Make it look like R2D2 or use the stickers to customize however you want. 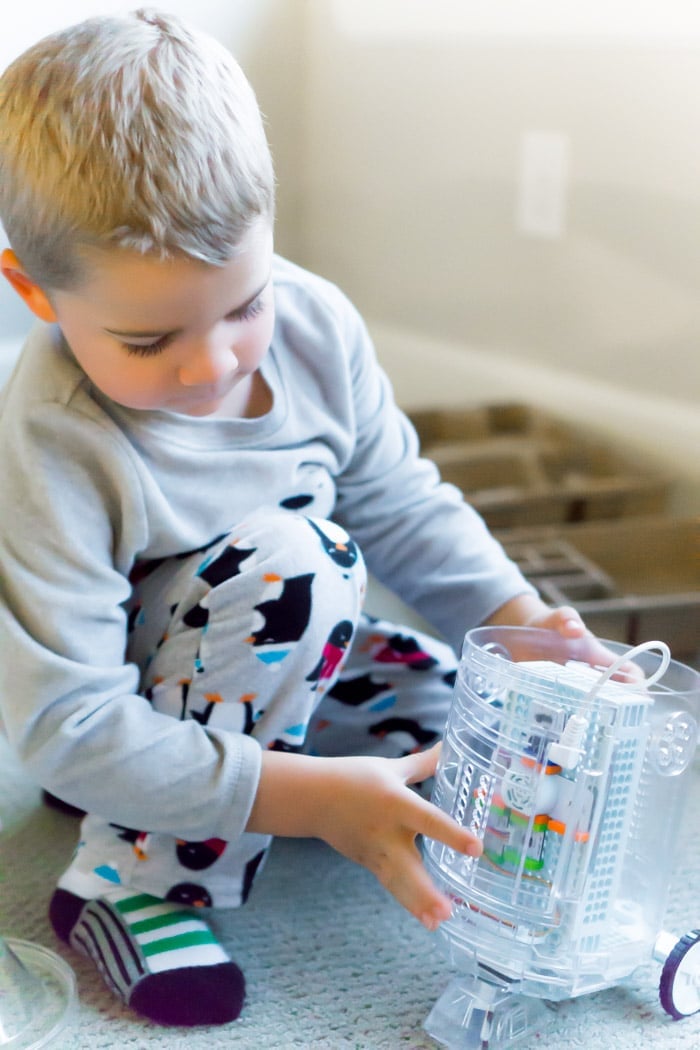 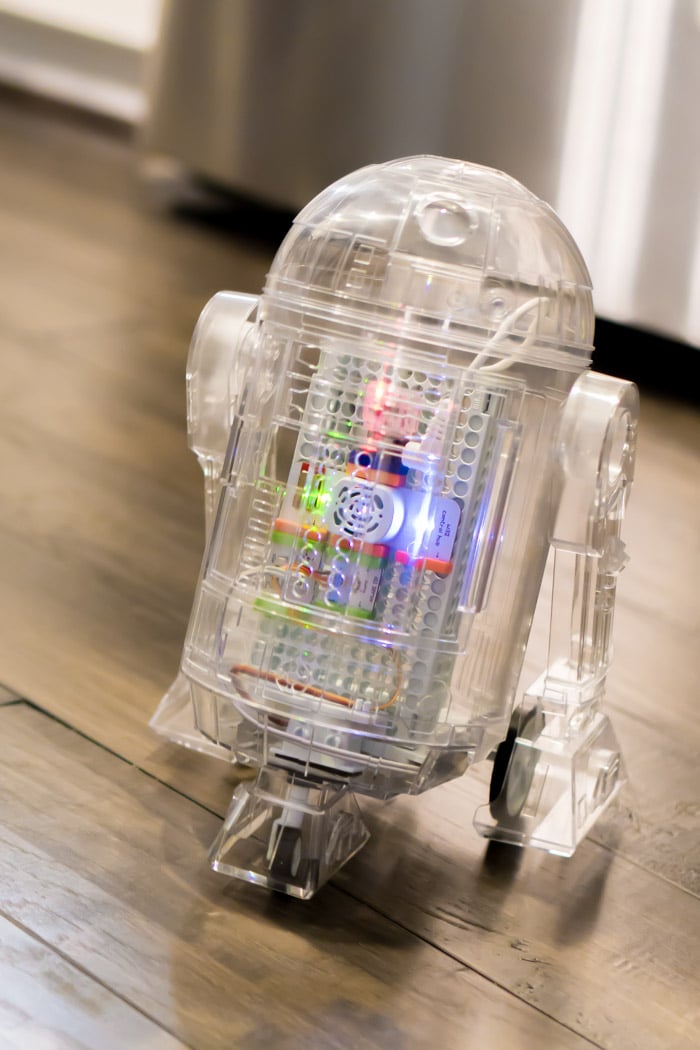 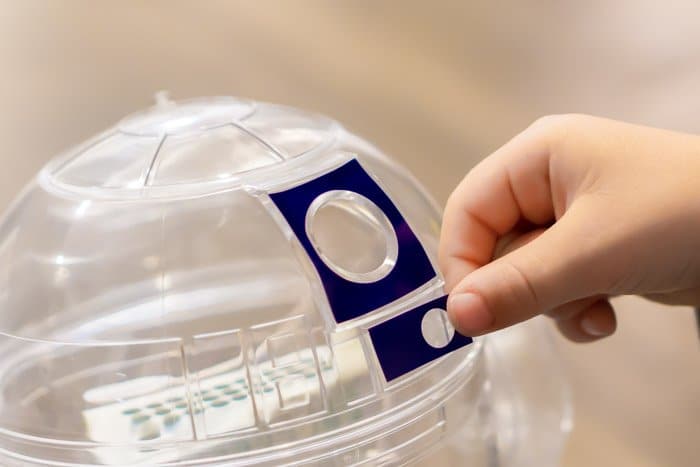 You know all of those scenes in Star Wars where the characters are monitoring things, adjusting things, and well pretty much doing everything using screens and tech. Well, yeah, you get to do that too with the corresponding Droid Inventor App that comes included with your purchase.

Simply download the app, select a mission, and get started. The app is one of the coolest I’ve ever seen with step by step visuals, videos, and animation that walks you through the process of building the droid, customizing the droid, and disassembling when you’re done.

You also use the app to complete missions with either a joystick, tilt drive mode, and even voice recordings. It’s simple enough that even my 4-year-old could do it! 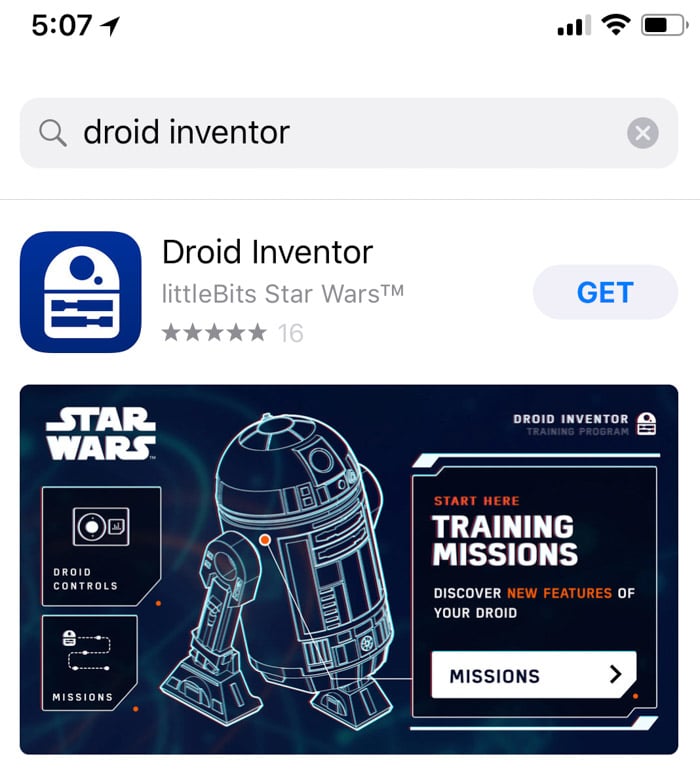 Not only do you get to build a droid that looks like R2D2, it also sounds like the Star Wars character. I mentioned it before but the droid inventor kit was actually created in partnership with Lucasfilm through the Disney Accelerator program so the sounds the droid makes are the real licensed ones, not some knock off versions. And there are over 20+ sounds in all that you can control in the app.

The littleBits Droid Inventor Kit may not be the first STEM (science, technology, engineering, and mathematics) toy out there, but it’s in my opinion one of the best. It’s fun, interactive, and really gives kids and adults the chance to learn and innovate rather than just sticking with what they already know.

Once R2D2 has been built, you can then disassemble your droid to complete additional building missions that include creating things like an intruder alarm, a droid that can be controlled with “the force” and more. And on top of that, you can customize your droid using the bits to create anything you can imagine.

Kids and adults have already been reimagining new missions for their droids around the world. These are just a few examples! Click the image to see thousands of ways people are using their littleBits in creative ways! 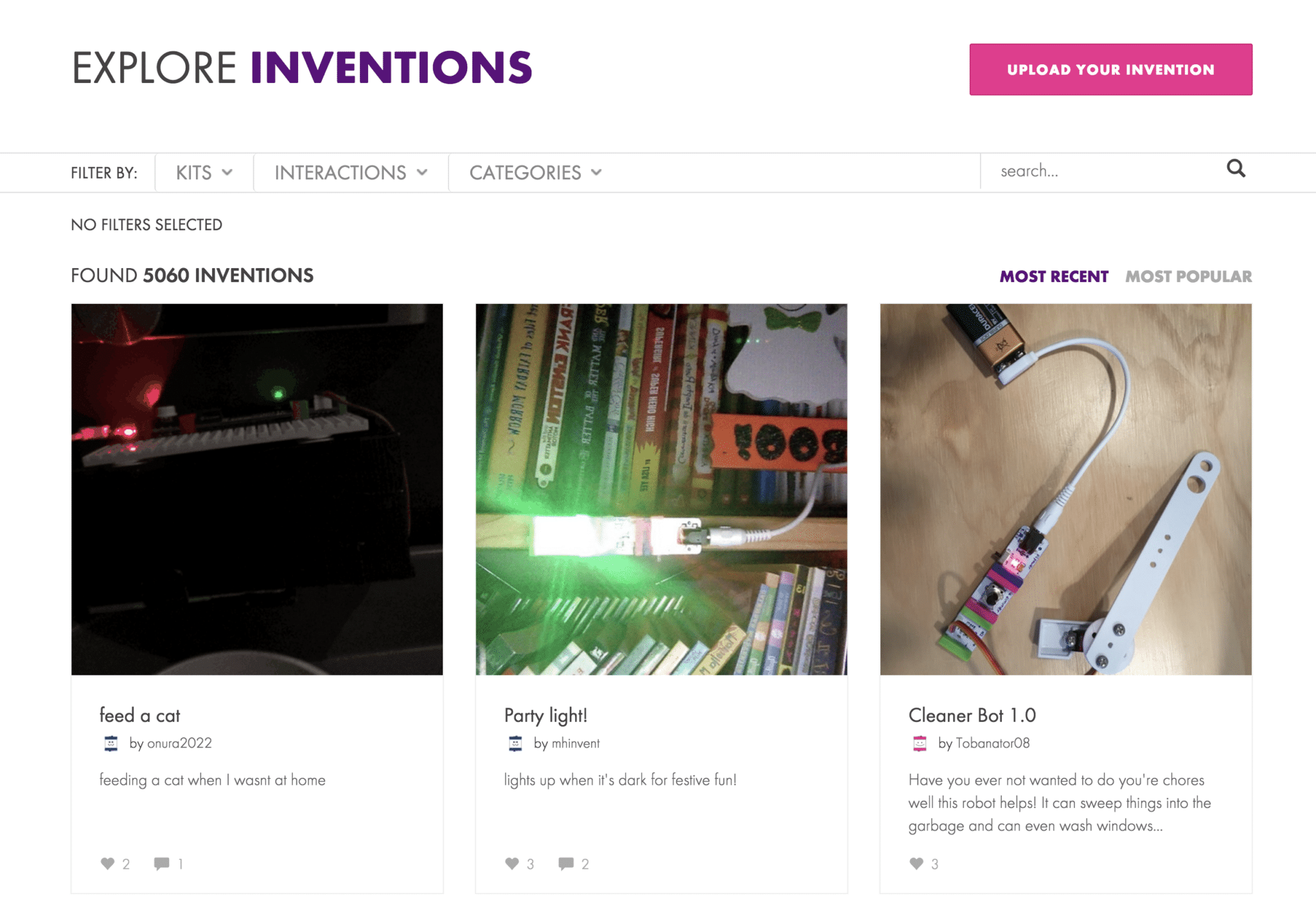 Once you’ve used the handy droid inventor app to build and test out your droid, you’re ready for some more challenging missions. One of those missions is force mode where you literally can move your droid with just the power of the “the force.” So if you know a Star Wars fan who has ever wanted to use the actual force, well here you go!

In addition to force mode, there are 15 other missions available in the app including building the droid, styling your droid (i.e., adding stickers), and guiding him through an obstacle course.

The first four missions all pertain to building your droid, and they get more challenging from there. Once you’ve completed all of the easier missions, more challenging missions such as force mode, head control, and self navigation are opened to droid users. This was my son’s version of the obstacle course challenge – a Thanksgiving twist with his new toy turkey. 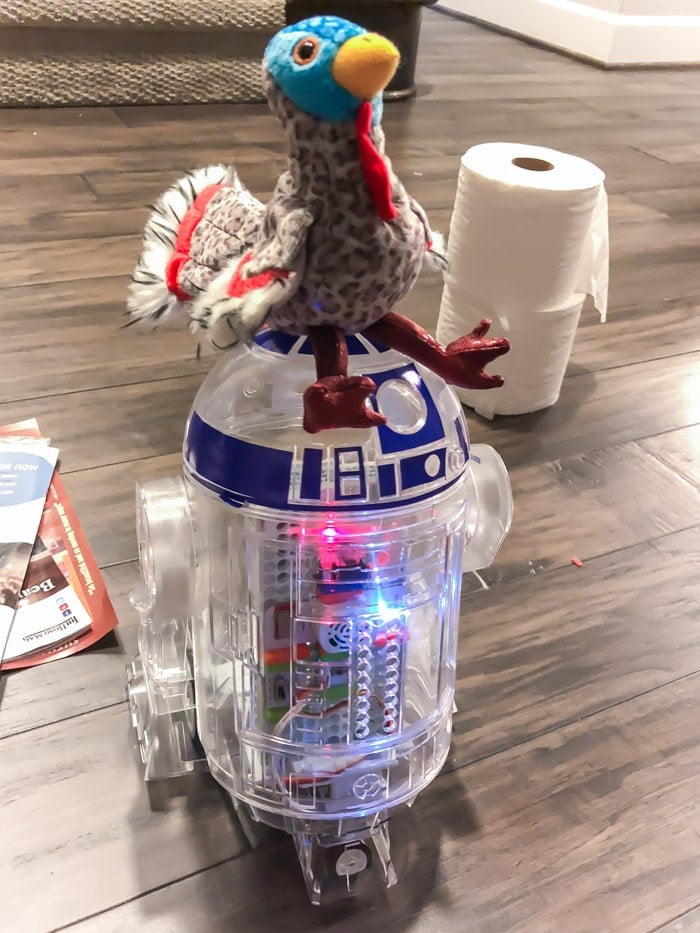 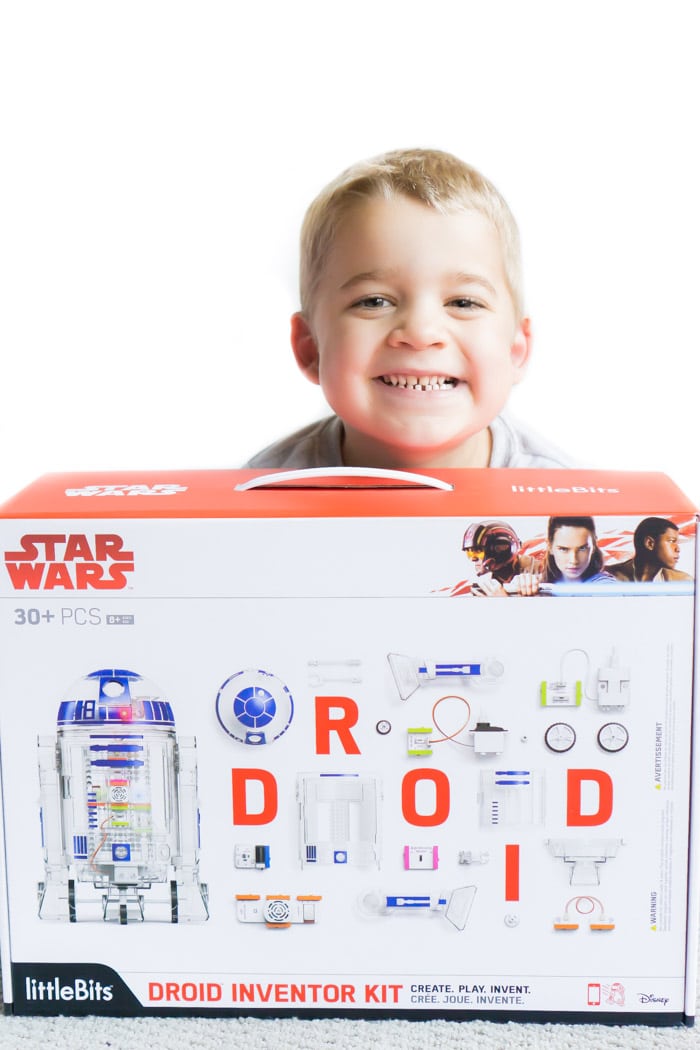 About the littleBits Droid Inventor Kit

The littleBits Droid Inventor Kit comes with everything you need to build your very own droid that looks just like R2D2 from Star Wars (or you can style it to look however you want)! With authentic sounds straight from the Star Wars films and 16+ missions including using the force to drive your droid, it’s a fun way to encourage creativity through fun and play. Perfect for any Star Wars fan!

What Comes with the littleBits Droid Inventor Kit

The littleBits Droid Inventor Kit retail price is $99.99 (see #7 in this post for Black Friday deals!!) and comes with the following: 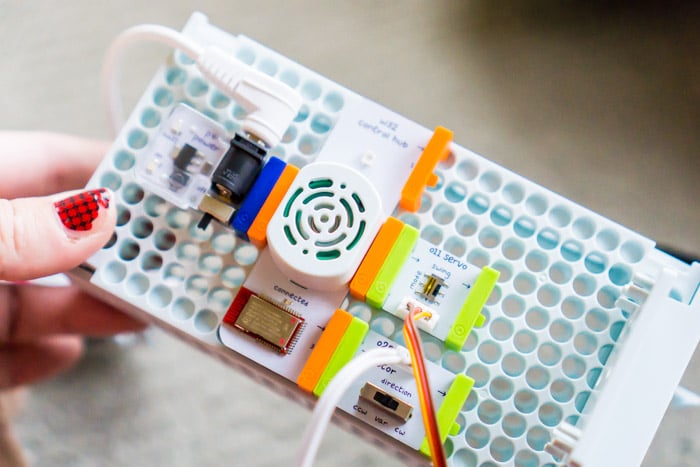 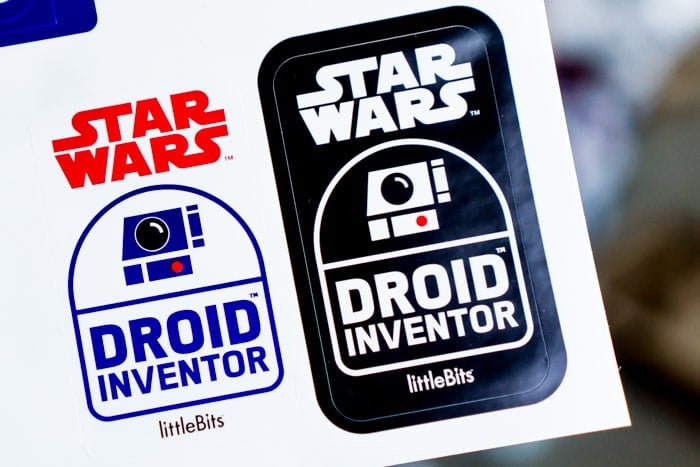 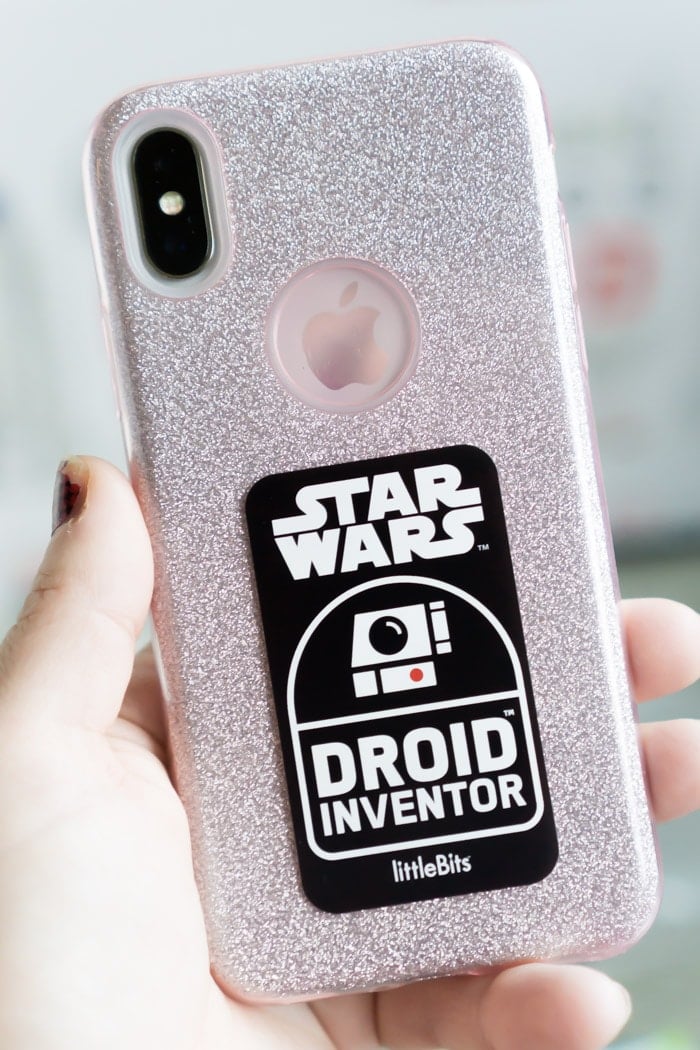 During our conversation with the littleBits team, they mentioned that the majority of jobs that our kids will have when they grow up have not even been invented yet. It makes total sense since my job, heck, the internet, wasn’t really even a thing when I was a kid.

Who knows what will be invented between now and when my son is getting his first job. The point is that kids need to learn how to create, how to innovate, and how to imagine. LittleBits was designed with that exact mission in mind – to empower kids to be creators and inventors of technology, not just consumers of it. In addition to the mission of empowering kids to create, littleBits designed their company and products to be: 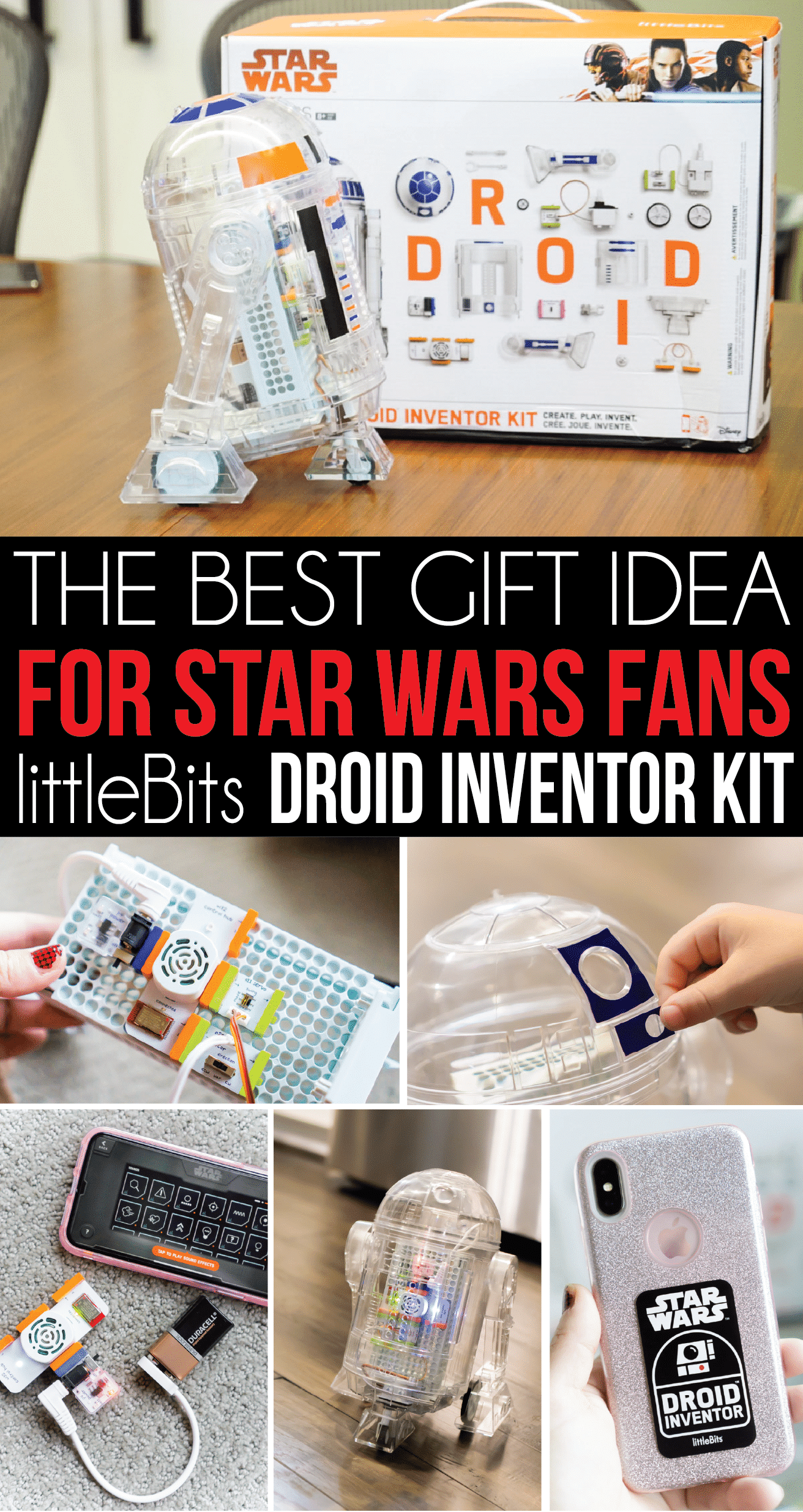 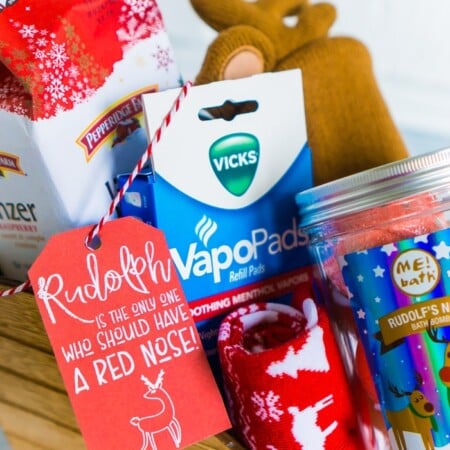 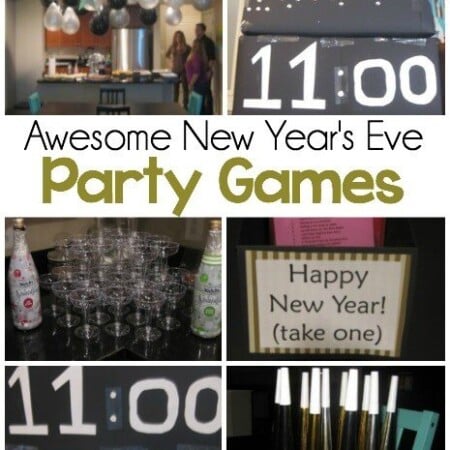