Mini pizza pies make the perfect cold weather snack to make and eat while watching your favorite shows on TV or while binge-watching the latest series on demand. 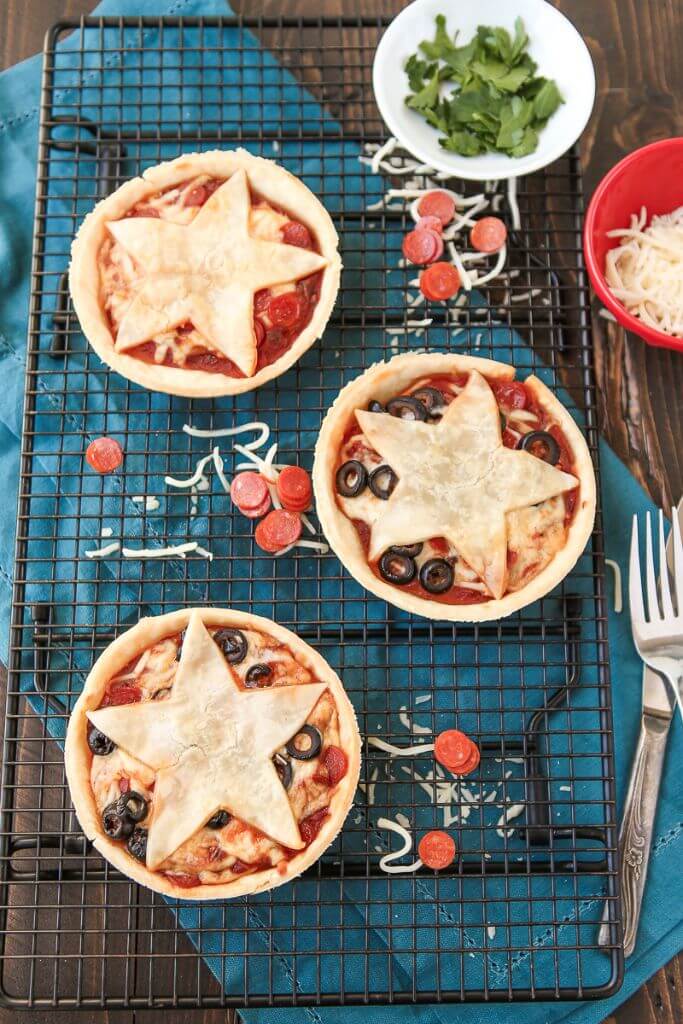 There are only a handful of TV shows that I’ve binge-watched from start to finish after already having watched the series live. Friends is one, The Office is another, and Gilmore Girls is the third. Oh, Gilmore Girls, how I love you. It doesn’t matter how many times I’ve watched the series, I could watch it over and over again and still love it.

I probably got that from my older brother who thought his relationship with my mom was similar to Rory and Lorelai’s, so was obsessed with the show as well. Or maybe it’s my little sister’s fault, my little sister who instead of hanging out with me when she came to help me purge my closet, decided we should watch the Logan episodes instead. I wasn’t complaining. These pizza pies are the perfect addition to any Gilmore Girls marathon.

Gilmore Girls is also one of the few TV shows that in my opinion ended terribly, basically just finished without really ending. That’s why I am so excited that the original writer of the show has joined up with Netflix to create a real ending to the show in four new episodes.

I don’t think anyone knows for sure when those four episodes will be released, but there is one thing I know for sure – I’ll be binge watching the entire series with my family over the next month or two to get ready for that four-episode marathon whenever it does come out.

With Gilmore Girls showing up everywhere right now as they get ready for the new ending, I thought it would be fun to create a recipe inspired by my favorite Stars Hollow mother and daughter team. They at a ton of pizza in the series and pie of course at Luke’s Diner. And with those two things in mind, I created mini pizza pies that are the perfect comfort food for eating with family and friends while you enjoy an episode, or ten, of Gilmore Girls this winter, preparing for one of the biggest TV events of the year! 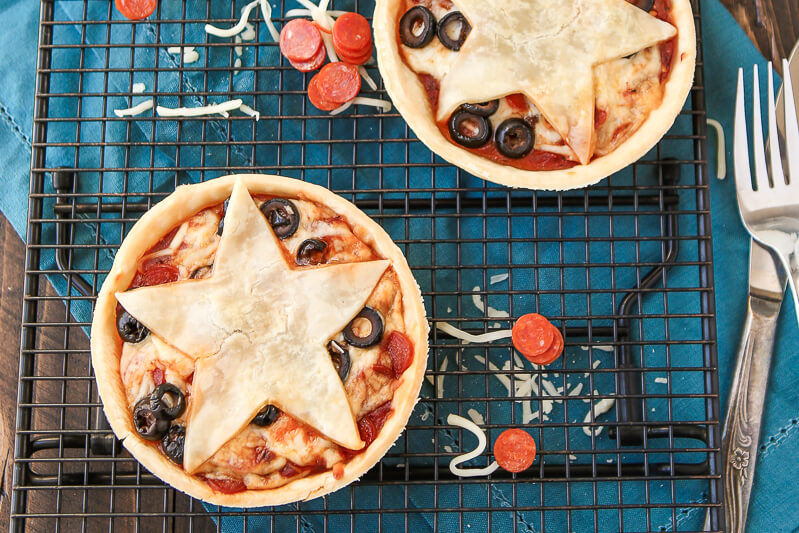 These pizza pies are so simple to make. First, gather your pizza toppings. My family likes pizza simple, so I went with some mozzarella cheese, mini pepperonis, and sliced black olives. And for the sauce, I opened a can of Hunt’s Tomato Sauce and mixed it with pizza inspired seasonings. For this girl who doesn’t eat onions and can’t eat most store-bought pizza sauce, homemade pizza sauce that starts Hunt’s red California tomatoes that are picked at the peak of ripeness, is an absolute must! 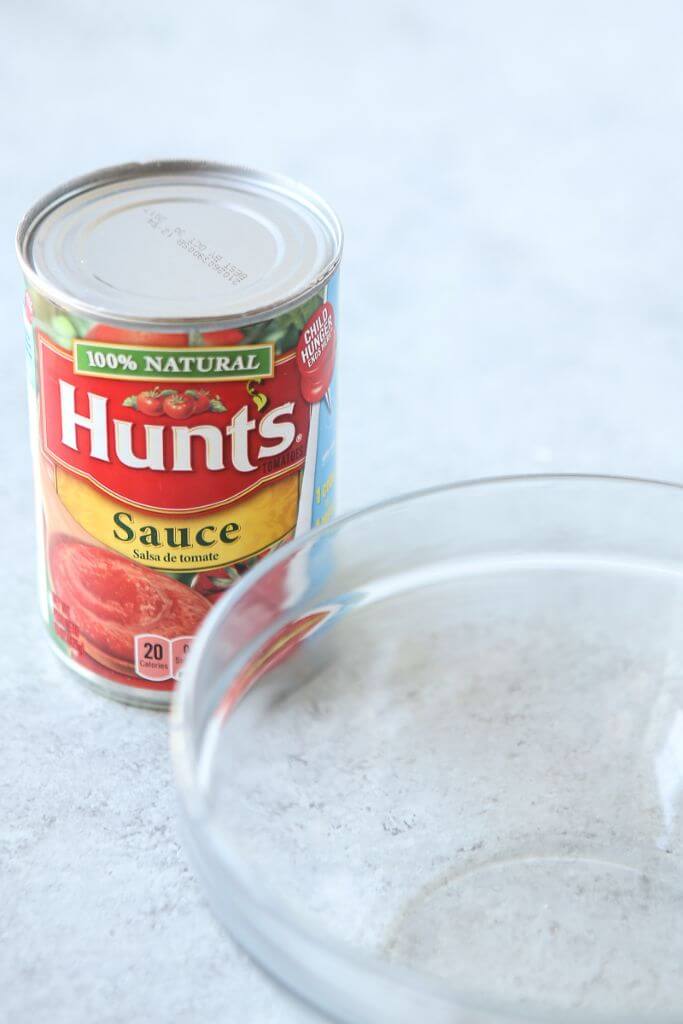 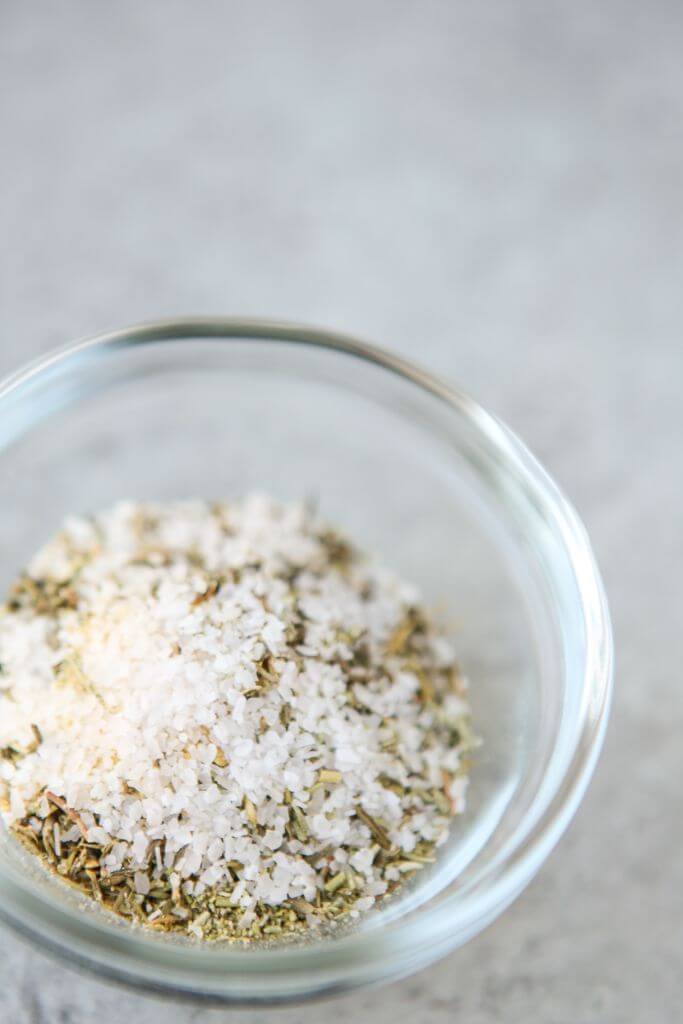 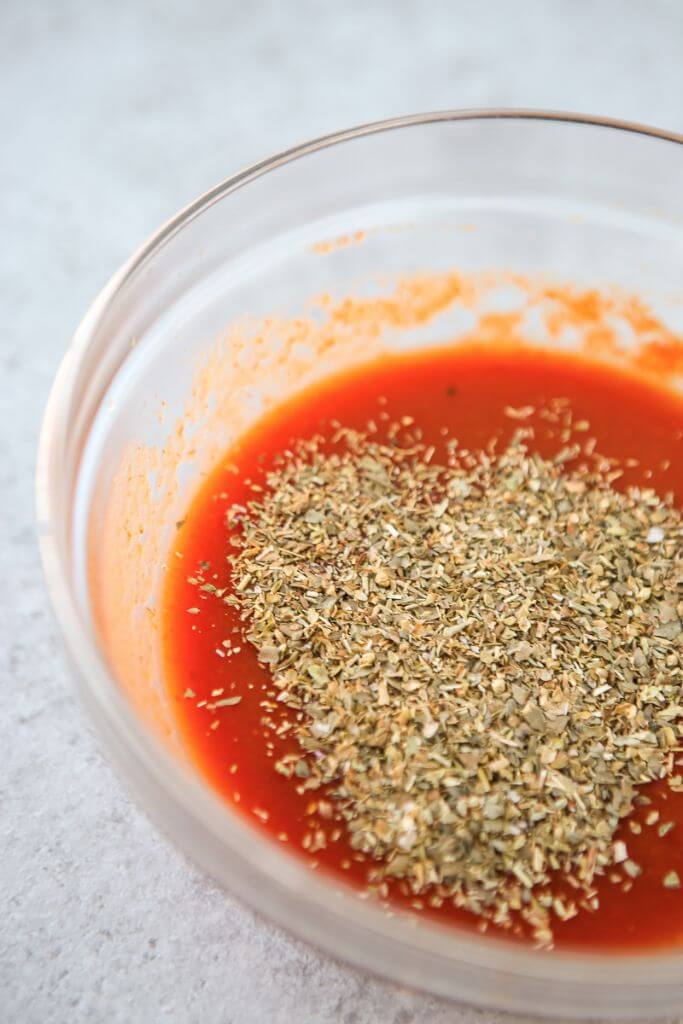 Start off by spraying mini pie pans (I used 6” glass) with PAM Cooking Spray. Spraying the pie pans is what will make your baked pizza pies slide out nice and easy without breaking the crust. Then use a cookie cutter, bowl, or glass to cut out circles from refrigerated pie crust dough.

You want a circle that is big enough to cover the bottom of the mini pie pan and come up the sides a bit. For my 6” pie pans, I used a 6” bowl, but I could’ve used a 7” and been fine. Once the dough is cut, lay it right into the pie pan and lightly press up on the sides to create your bottom crust.

Next up, add some of the pizza sauce right on top of the pie crust then top with any pizza toppings you want. Just make sure that you don’t fill it too much, so you can still put your pie crust topper on without the pie exploding. 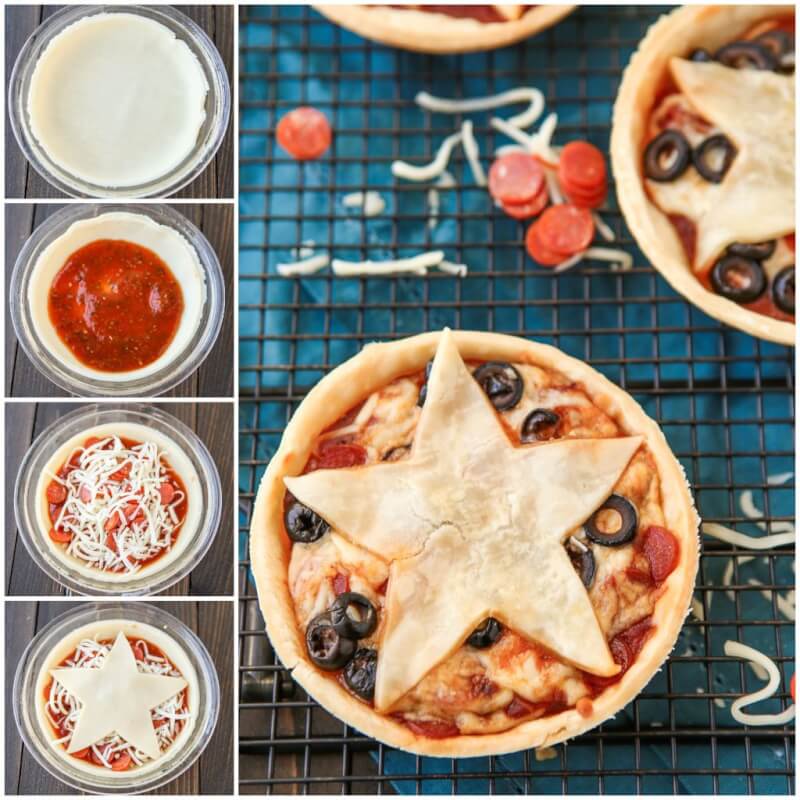 Once all of your toppings are in, either top the pie with another smaller circle or a fun shape like the stars that I used to represent Stars Hollow. Then pop those babies in the oven for a few minutes and go get your TV all set and ready for a fun night hibernating in front of the TV with family and friends. 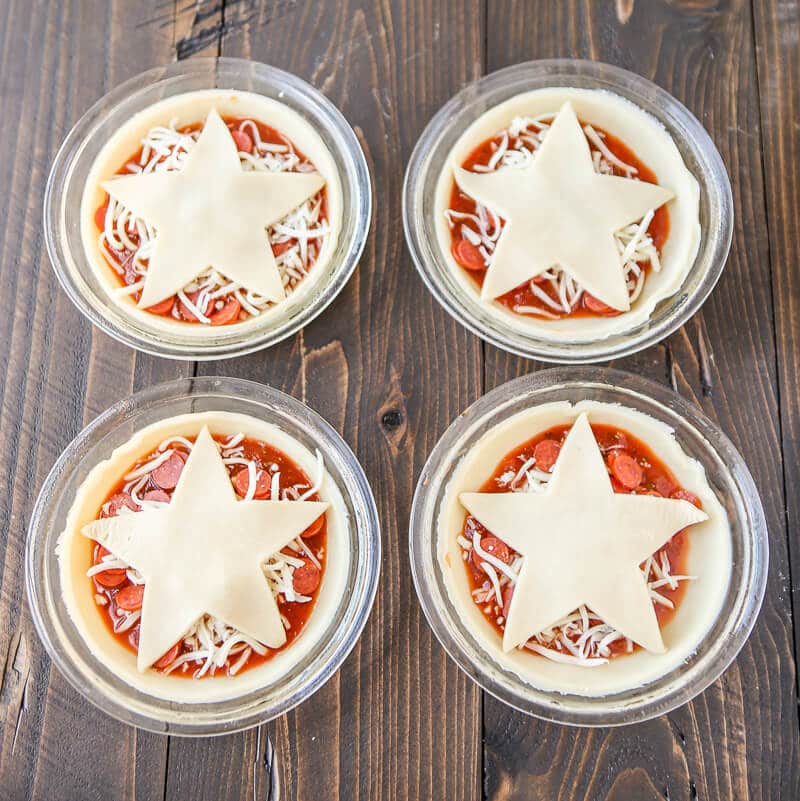 Once they’re fully baked, let them cool for a few minutes before lightly sliding the pies out of the pie pans and directly onto a plate. Eat immediately unless you’re so engrossed in the Dean vs. Jess saga that you can’t take your eyes away from the television to eat. In that case, eat whenever you can. It’s pizza, so it’s going to be good hot, room temp, or even cold. 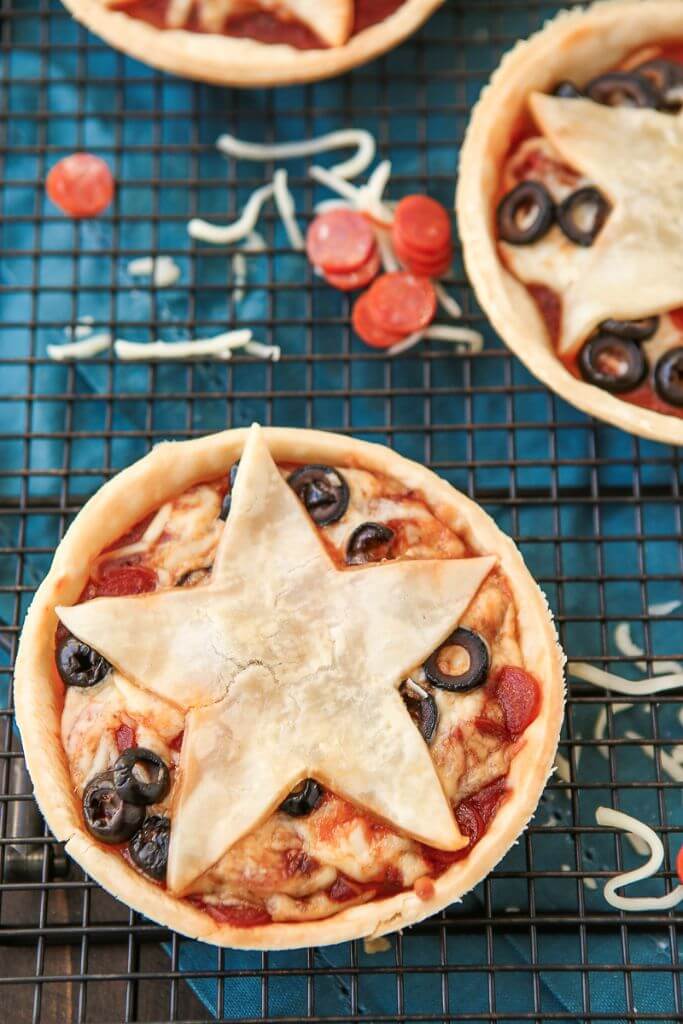 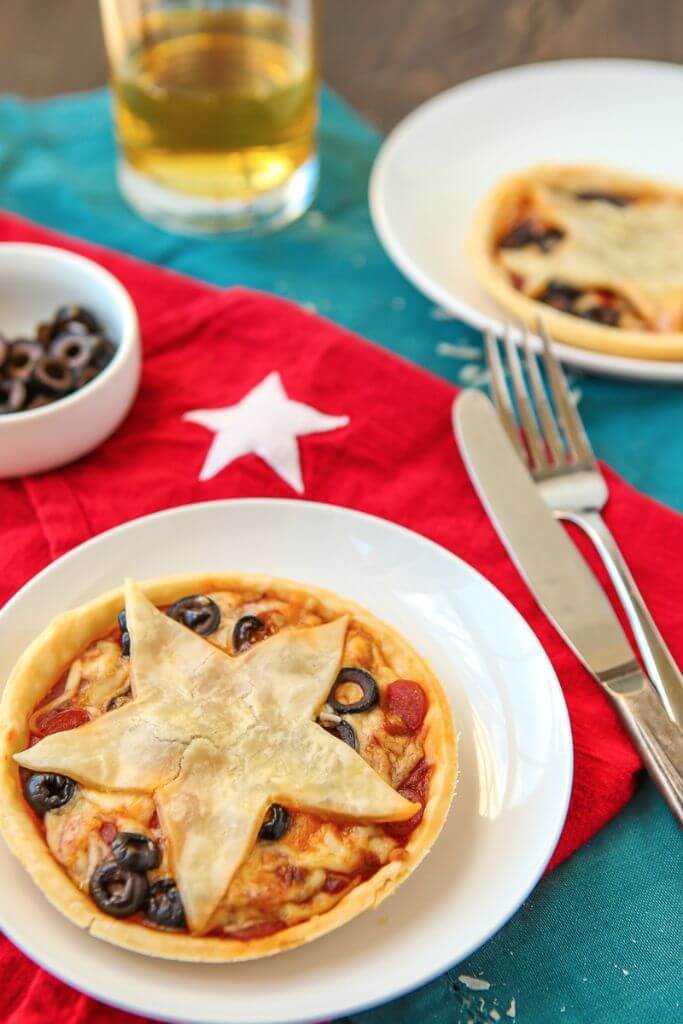 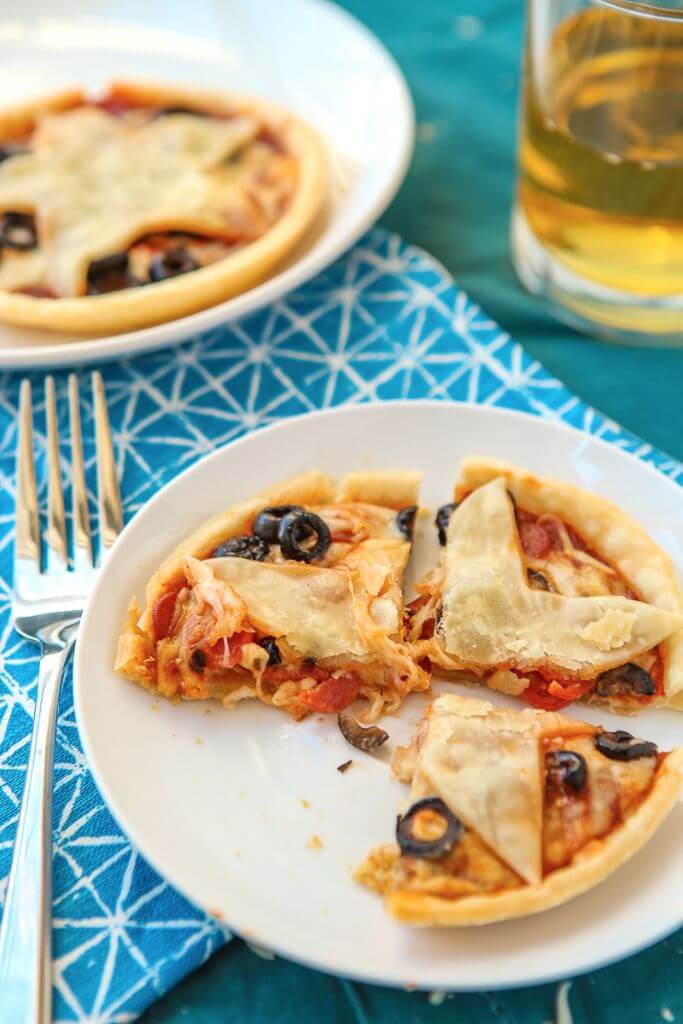 Your favorite pizza toppings baked into an actual pie crust! 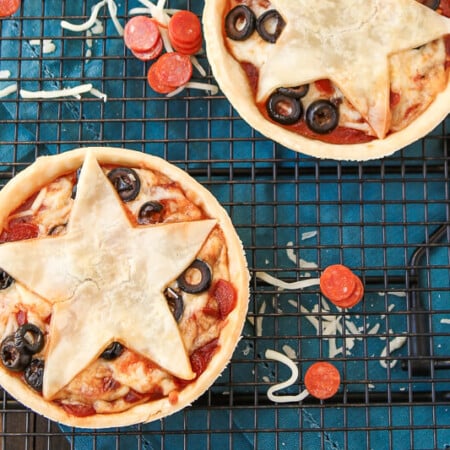 For the Pizza Sauce:

For the Pizza Pies:

For the pizza pies: 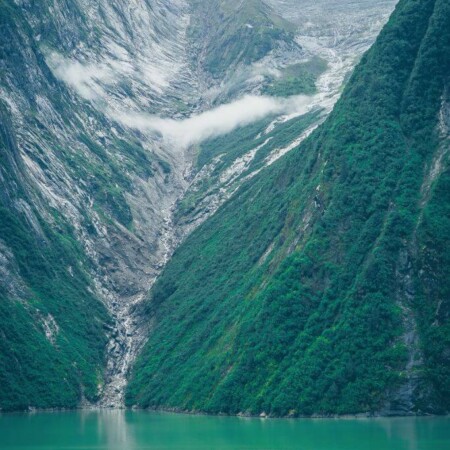 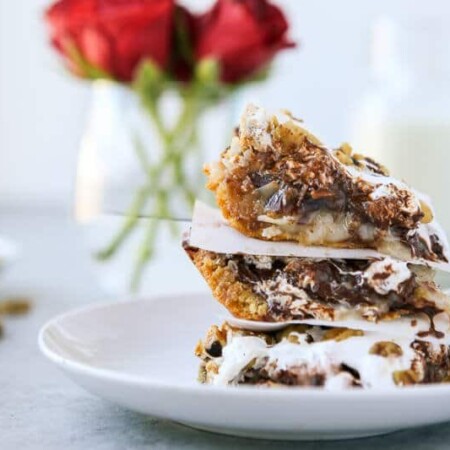