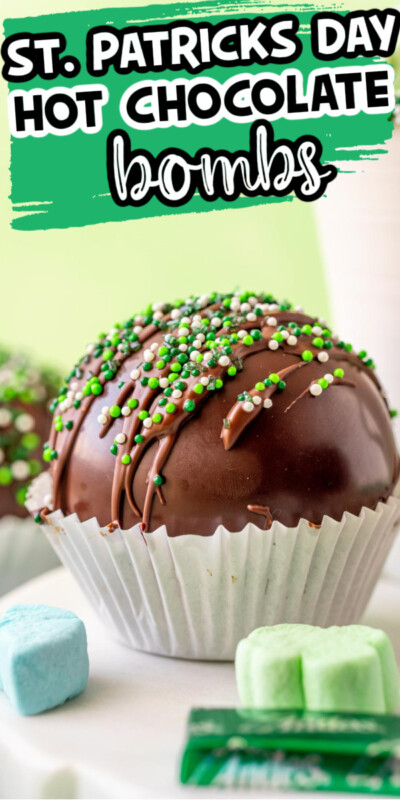 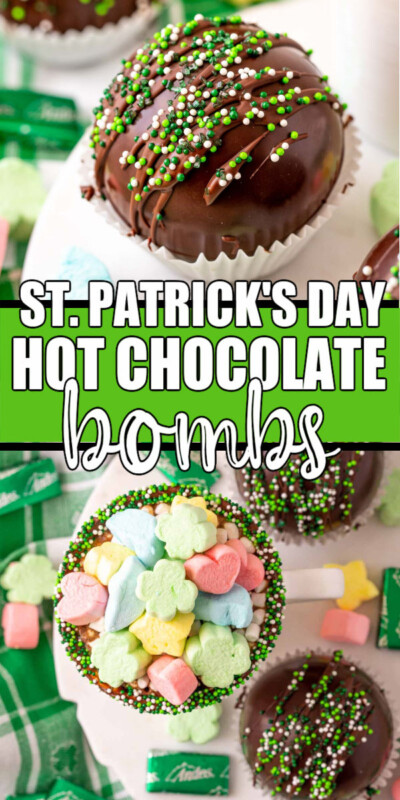 I’ll admit, I’ve a bit late to the hot chocolate bombs trend but it’s only because I’ve been testing out different methods and flavor combinations to get them perfect.

Yesterday I posted the ultimate guide of how to make chocolate bombs with tons of tips and tricks to the best hot chocolate bombs. So make sure you read that post too.

Why you’ll love this recipe

You’ll also need the actual ingredients needed for the bombs themselves. Here’s what you’ll need for these mint hot chocolate bombs.

If you’ve never made hot chocolate bombs before, don’t forget to read my guide to making how chocolate bombs here! So many helpful tips and tricks in there for perfect bombs!

Temper the chocolate first by microwaving five ounces of chocolate (or 10 ounces if you have two silicone molds) in a microwave safe bowl for thirty seconds.

After the thirty seconds, remove and stir then continue to microwave again for additional 15 second increments until almost completely melted, making sure to scrape and stir the bowl between each session.

Want to know if your chocolate is tempered? Smear a bit of the chocolate on a piece of parchment paper and place it in the fridge for a few minutes. If it is shiny and snaps in half after refrigeration, it’s tempered. If it bends, it’s not.

Use a silicone spoon to add a tablespoon of the melted chocolate to each individual mold then spread it around so the entire mold is covered.

Repeat with the second mold if you have two.

Place the finished molds on a baking sheet and refrigerate for five minutes.

After refrigerating, add another tablespoon of chocolate into one of the molds then spread around. Don’t do them all at the time or your chocolate will harden and be hard to spread!

Repeat with the other molds then freeze the mold for 10 minutes.

Put your gloves on and remove the molds from the freezer. Carefully remove the chocolate halves from each of the molds and set aside.

Microwave a microwave safe flat plate for two minutes then place one of the halves on the hot plate using your gloved hand. Spin the half gently to smooth out the edges.

Once the edges are smooth, place finished half in a cupcake liner. Repeat with six of your halves – you’ll do the others later.

Fill each of your chocolate bombs with a full packet of the mint hot cocoa mix, one Andes Mint, and as many of the mini marshmallows fit with you still being able to close the sphere.

Reheat the same plate for two minutes and repeat what you did earlier with the other halves. But instead of putting the smoothed out half in a cupcake liner, place it on top of one of the filled hot chocolate bombs and press down gently to seal.

Repeat with each of the halves until you have six hot chocolate bombs.

Drizzle with any extra melted chocolate and add green sprinkles for St. Patrick’s Day. Make sure to do this quickly as the chocolate tends to harden quickly.

Okay, now that your hot chocolate bombs are ready to go, you can either use them right away or store and use within 24 hours.

To use the mint hot chocolate bombs, place one of the bombs in a large mug. You can make it even more fun by adding a chocolate sprinkle rim to the mug!

Heat milk on the stove on medium heat until the edges are just beginning to bubble (you ideally don’t want it to boil) so that it’s warm enough to melt the hot chocolate but not scalding when you drink it!

Remove the milk from the heat and pour 8 ounces of milk over top of the hot chocolate bomb in the mug.

The hot milk will melt the chocolate sphere leaving with you a chocolately drink and lots of fun surprises!

Once the bomb has fully melted, make sure to mix with a spoon to incorporate the hot cocoa mix and other flavorings into the milk.

Top with additional marshmallows and sprinkles if desired – I like to add the Lucky Charms marshmallows here if you didn’t already add them into the bombs themselves!

Just a few random tips based on our experience trying to make hot chocolate bombs!

Move quickly, especially once you’ve melted the chocolate as you don’t want it to harden before you can finish the bombs.

This recipe is written for the mold linked in the supply list above, it’s a 2.75 inch mold. The recipe should work fine for any mold that is between 2.5 to 3 inches.

How do you use hot chocolate bombs?

Place the hot chocolate bomb in a mug then pour 8 ounces of hot milk over the bomb. The chocolate will melt leaving you with the hot cocoa mix, treats, and marshmallows in your drink!

Do you use milk or water for hot chocolate bombs?

As long as the liquid is warm, you could really use either, but I recommend milk for a rich and creamy hot chocolate.

These particular hot chocolate bombs are best used within 24 hours but can last in an airtight container or bag for up to a week.

If you like these chocolate treats, you’ll love these other chocolate desserts! 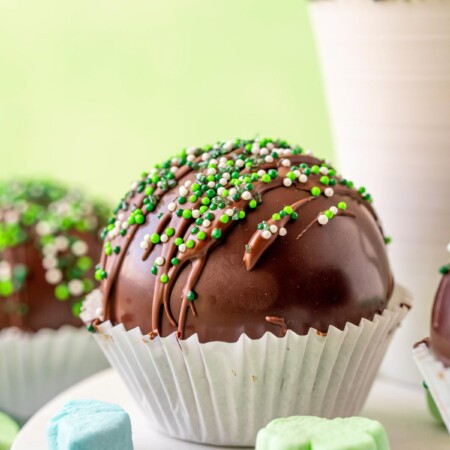 Microwave 10 ounces of chocolate at a time if you have two molds. You just don’t want all the extra chocolate to sit if you only have one mold that only holds the first five ounces of chocolate. If your temperature is too high, add an ounce and stir it in to bring the chocolate temperature back down.  Check if your chocolate is tempered. Smear a bit of the chocolate on a piece of parchment paper and place it in the fridge for a few minutes. If it is shiny and snaps in half after refrigeration, it’s tempered. If it bends, it’s not. Enjoy right after making or at least within 24 hours. They don’t stay as nice for longer than that. Avoid drying the silicone molds with a dishcloth because they tend to attract lint. Let them air dry or pat dry with a paper towel if you’re in a hurry to use them again. You’ll need six ounces of chocolate for every three hot chocolate bombs you want to make, this recipe is written for six hot chocolate bombs. Make sure to move quickly, especially once you’ve melted the chocolate as you don’t want it to harden before you can finish the bombs. This recipe is written for the mold linked in the supply list above, it’s a 2.75 inch mold. The recipe should work fine for any mold that is between 2.5 to 3 inches. 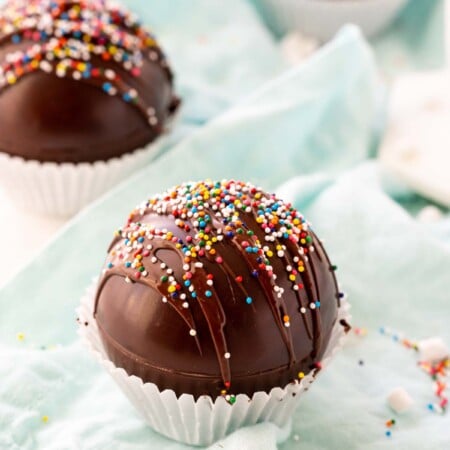 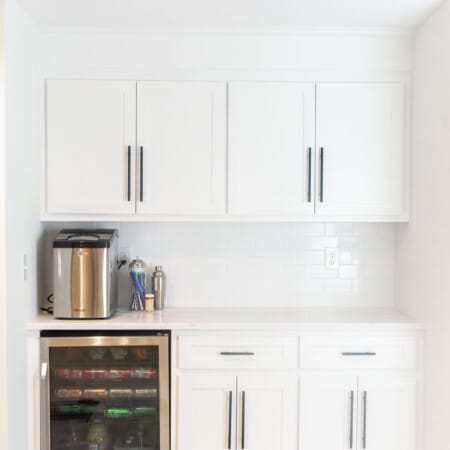