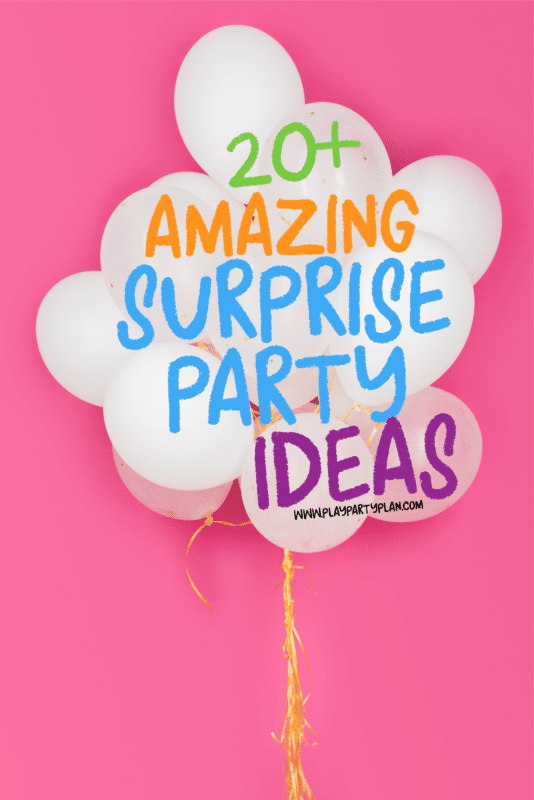 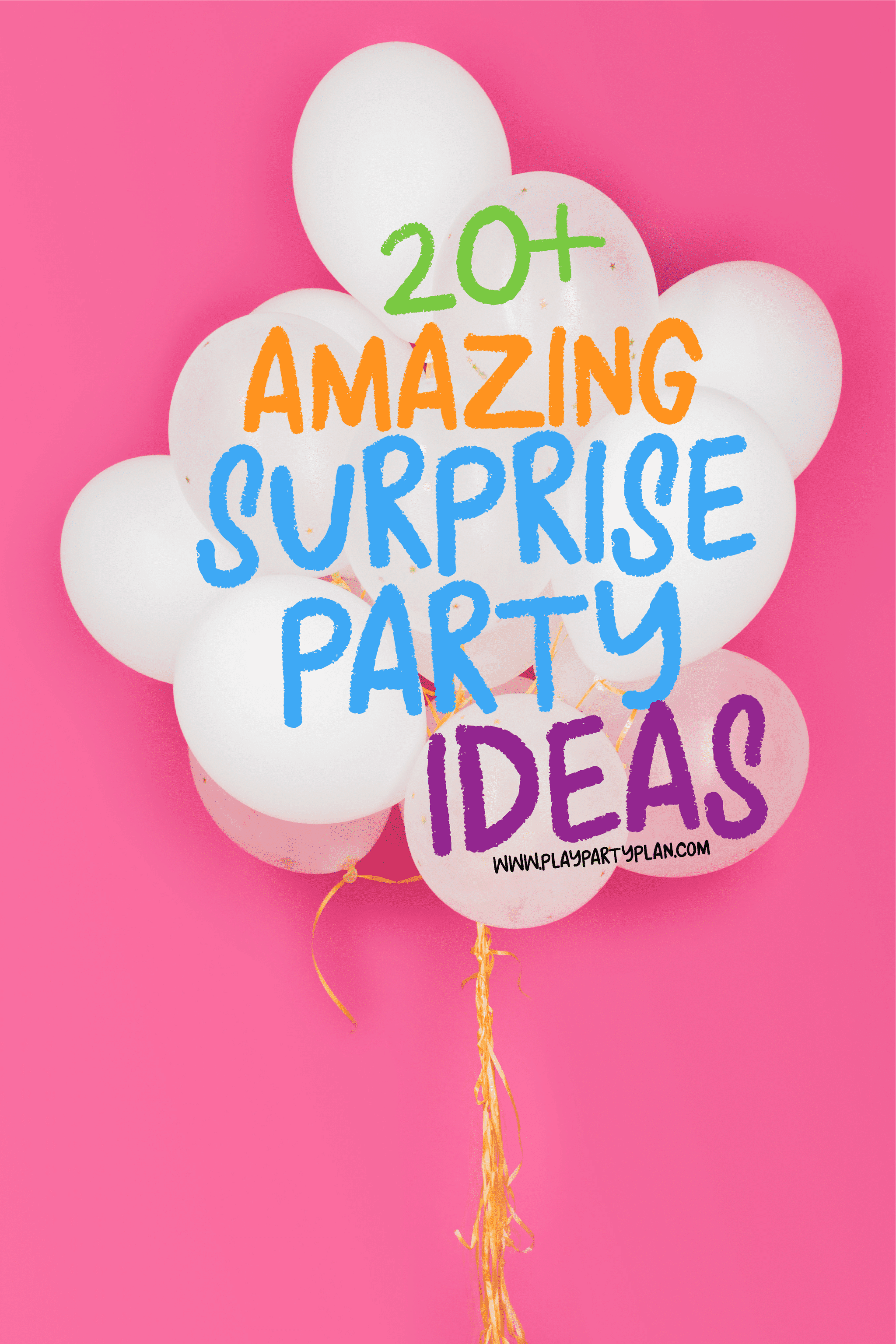 This post is sponsored by Evite and written as part of the Evite Influencer program. All opinions and ideas are 100% honest and my own.

Some of my favorite ever party memories are when we pulled off an amazing surprise party for a family member or friend! We did one for my brother when he turned 18 and I still remember every detail. There is just something about surprise parties and that added element of surprise that makes them so memorable!

And speaking of memorable, I’ve put together a bunch of tips, tricks, and surprise party ideas – food, games, and more – for one epic surprise party!

Tips for Hosting a Surprise Party

Have someone else help you host the party, preferably someone that isn’t quite as close to the guest of honor as you are. You want someone who is comfortable hosting but isn’t as likely to get caught making phone calls, sending text messages, or reading emails.

The Evite co-host feature makes co-hosting a party easy. Simply add them to the invitation as a co-host and they will receive all RSVPs, responses, and more. You can even set them up as the only one to receive notifications of RSVPs so you don’t risk the chance of the guest of honor accidentally seeing an email in your inbox. 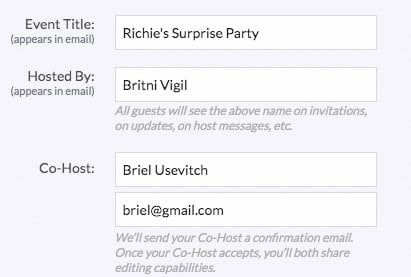 Don’t Host it Somewhere the Guest of Honor Frequents

I’m always a fan of being able to plan and prep parties ahead of time. Choose a venue to host your event, whether it is someone’s home or an outside venue, that the guest doesn’t frequent. But also a place that wouldn’t be too weird to go so they don’t suspect anything when they’re walking in. You don’t want to have to rush to set everything up in the say two hours the guest of honor is distracted before the party. Give yourself more time to plan and prep by hosting it somewhere else they wouldn’t be the day of.

Even better if your co-host is willing to host the party at their home. You can have food, decorations, and more delivered straight to their home instead of having to hide anything in yours. The less you have to hide, the less likely you’ll get caught.

Take the stealth up a notch by sending invitations via text message. This is especially handy if the guest of honor shares a computer or email with you. Check out Evite’s surprise party invitations for some great options you can send via text!

Don’t do the surprise party on the person’s actual birthday or anniversary or special day. Do it a day before or a day after so they’re not expecting anything. If it’s after, plan something small like dinner out for their “celebration” to throw them off the scent of anything big coming later.

Don’t try and do everything by yourself or even with just you and your co-host. Surprise parties typically mean getting a lot of help from people whether it’s to be the diversion before the party, to help setup at the party, or to contribute food/drinks. Let people show their appreciation for the guest of honor by helping with their party!

If you’re asking for people to bring contributions to the party such as food, drinks, or party supplies – set up a signup after you send your invite with Evite’s easy to use what to bring organizer! You can keep track of all of your RSVPs and who is bringing what all in one place! 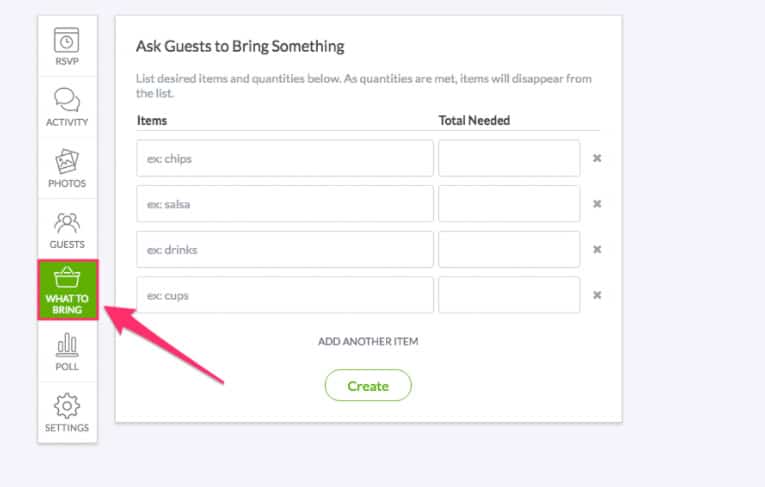 I already mentioned sending surprise party invites by either text message (if you share an email or computer) or email – I also recommend telling people ahead of time by word of mouth. Then when you send the invites, they’re more of just a formality – a pretty formality with all of the event info on it! 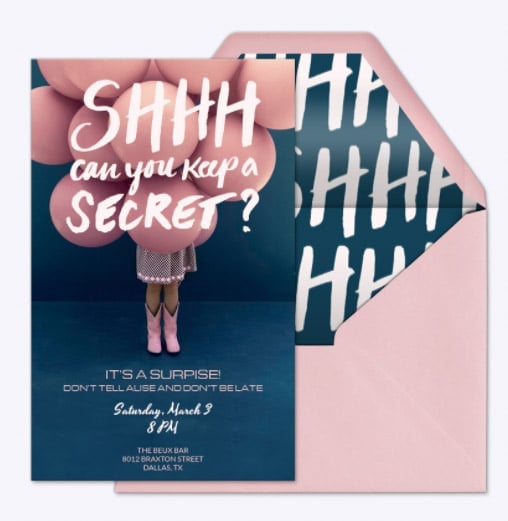 These are just a couple of fun surprise party themes I came up with that tie well into the surprise party idea. You could obviously just do any sort of theme you want whether it’s a birthday party, anniversary party, etc. But I think it’s fun to stick with a theme from the very first invite to the party favors!

Can You Keep a Secret Party Theme

Plan an entire party around secrets. Serve food with secret ingredients, play games like Werewolf that require people to keep secrets, or even set up some sort of secret agent activity. Or just find out the guest of honor’s secrets with the “It May Come as a Surprise” game below! It’s a fun way to keep the secrets going even after you’ve yelled surprise!

Don’t Let the Cat Out of the Bag Theme

This theme would really only work for a specific person but I think it could really fun anyway! The key is to go light on the cat and heavy on the bag! Serve food in mini bags, play the “what’s in your bag” game from my list below, give out bags of candy as favors with these sweet gift tags, and of course incorporate cats in some subtle but still there way.

This is definitely the easiest of these party themes. Decorate with balloons, bubbles, bubble gum, and anything else that you could blow. Serve a cake with candles to blow out. Serve mind-blowing food. Play the balloon burst game from these birthday party games or any of these balloon minute to win it games. And give people a cute scented candle to take home.

Similar to the secret party theme, plan an entire party around surprises. Make surprise cupcakes. Freeze ice cubes with surprise berries inside. Play surprise Scattergories or this gift exchange game using the surprise party poem I created for you (printable below!). There’s so many things you could do with this theme – surprise everyone with how creative you can get!

All four of these surprise party games would work for any of the themes above or really any surprise party you’re going to throw. Other than matching the Evite invites in this post, they’re generic enough to be used for any theme, any person, and any time of year! Keep scrolling to the very bottom to get a free printable download of all four games.

The person who earns the most points from matching the guest of honor wins.

What Surprises Are In your Bag?

Whoever earns the most points from the printable list of items wins. 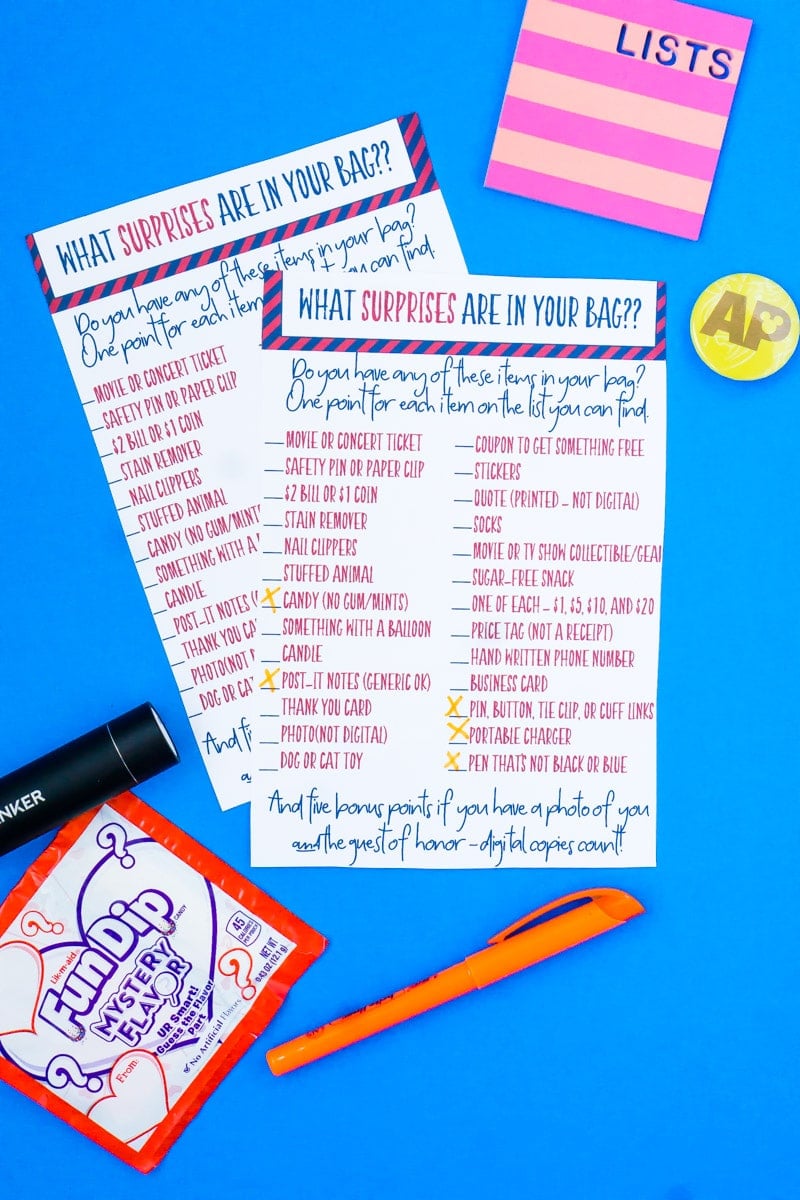 A Layer of Surprise

Before the game, print out the gift passing poem and cut into couplets. Wrap the gift with one layer of wrapping paper then put the final couplet of the poem on top of that layer. Wrap it again and add the next to final layer of the couplet. Continue wrapping and adding couplets until you run out of couplets – then wrap it on more time. This is one of my most popular gift exchange game ideas and would be perfect at a surprise party!

Note: In the poem, there are mentions of where someone gets a small gift. Put the gift card or dollar bill with these couplets (wrapped up) so people know they get to keep that small gift but should continue wrapping/passing the gift. 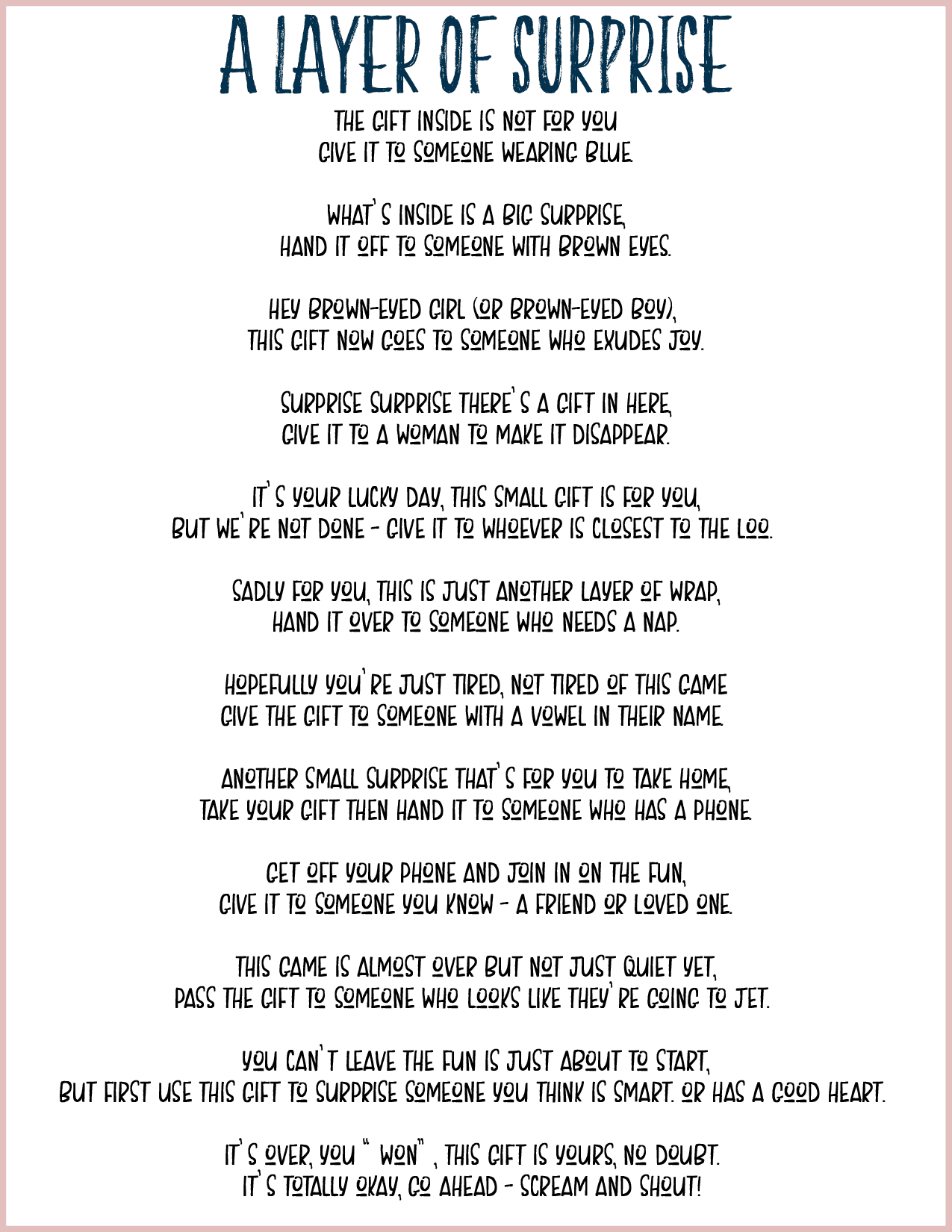 It’s not just kids who love blind bags – adults loves surprise bags too! Fill a bunch of colored bags with random surprises (have one pile for men and one pile for women) and let people take a surprise bag as their party favor. They can either open it before they go (and trade if they want) or take it home for a surprise later! Just make sure all of the surprises inside are things people will actually keep (or eat) so it’s not a waste of your time and money!

Evite Wants to Surprise You With Prizes!

This year Evite is celebrating their 20th birthday and instead of someone throwing a surprise party for them – they’re hosting a Surprize sweepstakes to give their users thousands of dollars in prizes! Simply enter your email address on this sweepstakes page for your chance to win sweet tech gifts and surprise gift cards from Evite! 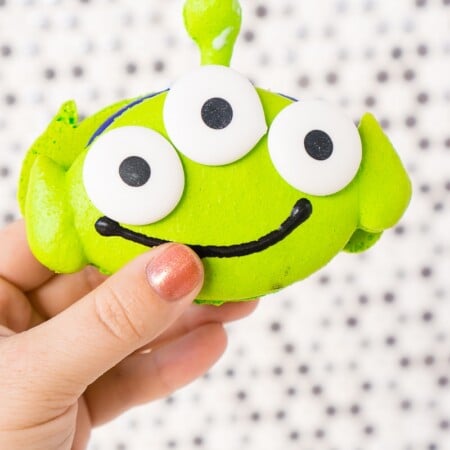 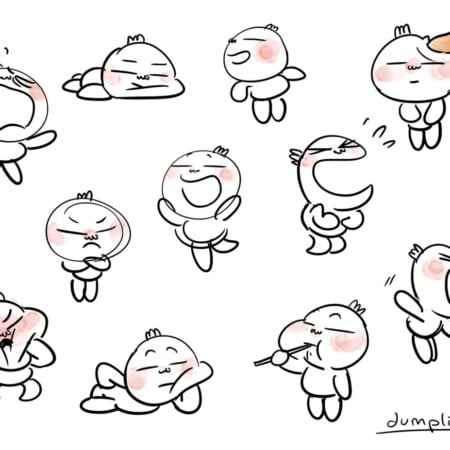