This post contains affiliate links, but I only link to things that I use!

If you’ve read my blog for long, you’ll know that I absolutely love the game show Minute to Win It. One of the things I love most about it is that you can incorporate the overall game idea (quick games using household items) into pretty much any theme you want like I did with my Lego Minute to Win It Games. I was in charge of putting together some games for girls camp and thought it would be fun to play young women’s Minute to Win It, using games I put together using the eight young women values. These could also just be fun and silly party games as well. Either way, it’s a pretty fun young women’s activity idea! 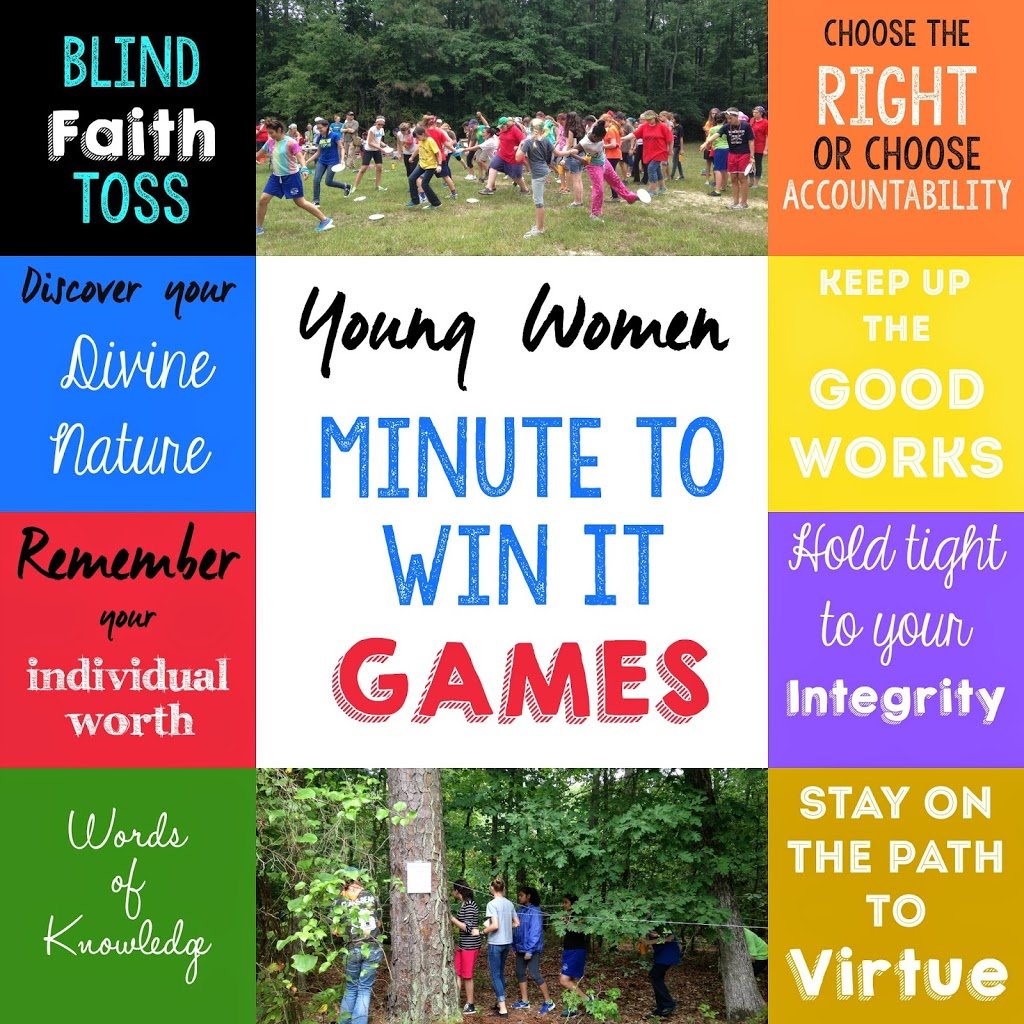 The way we set these games up was to split up our group of 75 young women into teams of 7-8 girls. Each of those teams competed at the same time to see who would come in first, second, etc. in each of the games. We kept track of the winners of each game and gave our prizes for each individual game at the end of the night. If you only had say 10 girls and wanted to play these things individually, you can easily adapt most of them to work for an individual rather than team. 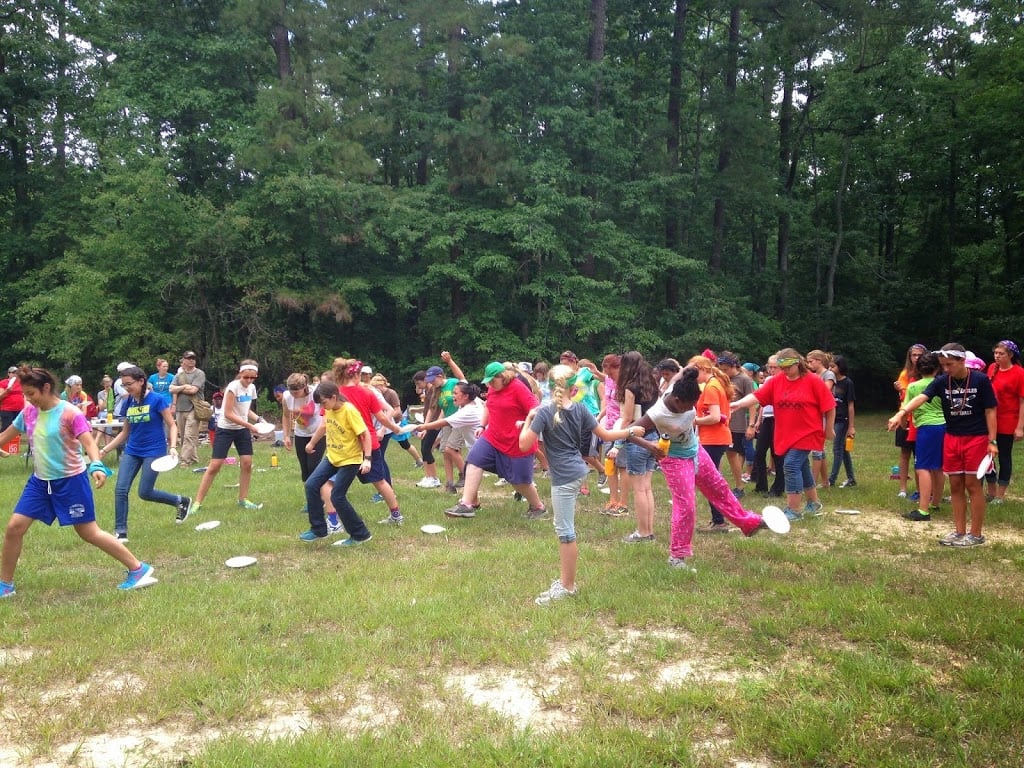 Prep: Cut out each individual word of the definition and stuff each individual word into a different balloon.
Play: Give each team a set of balloons (that are stuffed with the definitions). Tell them when you say go that they must blow up the balloons, pop them, find the words inside, and unscramble the sentence. The first team to unscramble the definition wins.
Prize: Blue Pop Rocks
Remember Your Individual Worth (Red)
Supplies Needed (1 per team):
Play: Have each team sit in a circle with the leader at the head of the circle. When you say go, the leader should whisper the phrase to the first person in the circle. That person will then whisper the phrase to the next person in the circle and so on, just like in an old-school game of telephone. The first team that can pass the entire phrase around the circle from the leader at the beginning all the way to the leader at the end wins.
Prize: Mini 100 Grand Bars
Words of Knowledge (Green)
Supplies Needed (1 per team):
Play: Give teams the list of scriptures. Have them look them up as quickly as possible and determine what the shared word is among all of the scriptures. The first team to come up with the shared word wins.
Prize: Bag of Smarties
Choose the Right Choice or Accountability (Orange)
Supplies Needed:
Prep: Take about 1/10 of the slips of paper and right the words “The Right Choice” on them. Or if you want to make it easier, just print out a sheet of paper with those words copied on it. On the rest of the slips of paper, write silly things for the girls to do that will take 15-30 seconds such as singing I’m a little teapot, doing 10 jumping jacks, hopping in place for 15 seconds, etc. Once you’ve finished writing out the silly tasks, put them with “The Right Choice” papers and mix them up. Line all of the plastic cups up on the flat surface area and underneath each of the cups, put one of the slips of paper.
Play: Teams should line up in a straight line about 100 yards from the table of prepared cups. When you say go, the first person on the team should run to the table and choose a cup. If the slip of paper in their cup says, “The Right Choice,” they are done. If it has an “accountability task,” like singing I’m a little teapot, they have to do the task before running back to their team to tag their next teammate. The next teammate then runs to the cups, chooses a cup, and performs the task. Repeat until each of the teams has picked the right choice.
Prize: Pack of gum for “chews-ing” the right.
Keep Up the Good Works (Yellow):
Supplies:
Prep: Blow up the balloons. Once blown up, write “Good Works,” on them.
Play: Each team will be given a bag of blown up balloons. Teams must keep ALL of their balloons in the air as long as possible. Once one of the balloons drops, the team is out. The team to keep all of their good works balloons up the longest wins.Prize: Mr. Goodbars
Hold Tight To Your Integrity (Purple)
Supplies Needed: None
Play: Tell each team to get in a circle. Once they are in a circle, have each team member put out their hands and grab the hands of two different teammates, other than the person directly across from them and the person directly next to them. Once all teams have grabbed hands, say go. Teams must work together to untangle themselves. The first team to untangle into a circle wins.
Prize: Purple chocolates or candies
Stay on the Path to Virtue (Gold)
Supplies Needed: Enough paper plates for each person playing + 1 additional plate per team (i.e., if a team has 8 players, you’ll want 9 plates for the team).

Prep: Setup a start and finish line, approximately 100 yards away from each other. Have teams line up in a straight line with the first person in the line right behind the starting line. 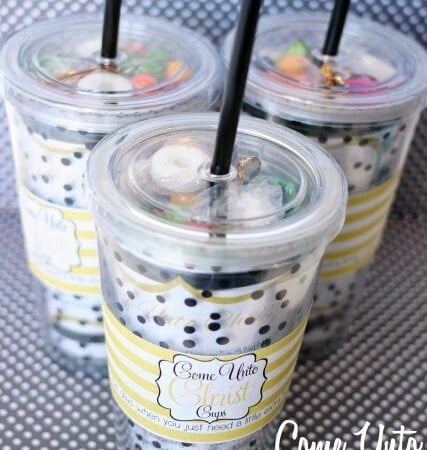 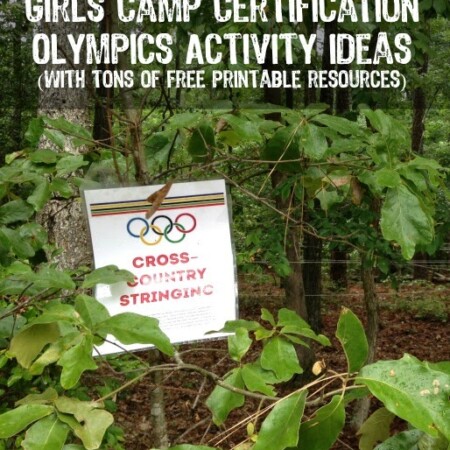