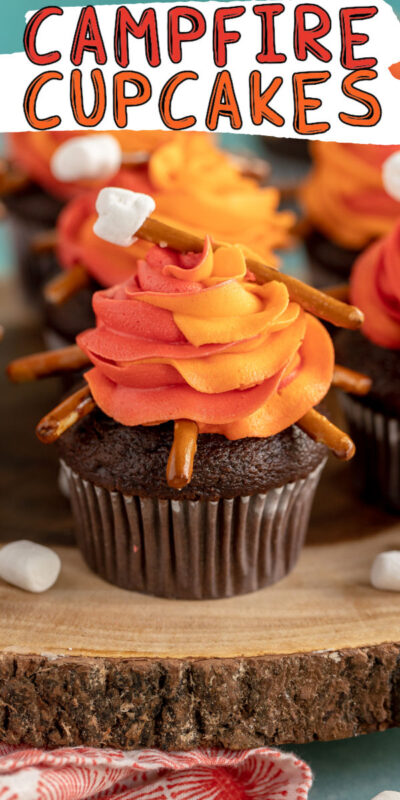 These fun campfire cupcakes combine a delicious chocolate cupcake with a fiery frosting and a marshmallow roasting on a pretzel stick! They’re not only adorable but delicious as well, perfect for serving at a camp themed birthday party or while you’re actually camping!

I love a lot of things about camping but not necessarily the bugs. So instead of actually going camping these days, I really like to host camping themed parties and sharing camping party ideas!

These campfire cupcakes are an adorable addition to any camp party dessert table or would make a great dessert for an actual campout (as long as it’s cooler so the frosting won’t melt!).

Serve these adorable cupcakes after playing a few rounds of camping charades or any of these other camping games! Or send kids on this camping scavenger hunt and have these camp themed cupcakes at the end as a prize for finding all of the items on the list!

How to make campfire cupcakes

I’ve written this recipe assuming that you already have your chocolate cupcakes but if not, you’ll need to make those! The rest of these step by step instructions are how to decorate the cupcakes into campfire cupcakes!

Start with 24 of your favorite unfrosted chocolate cupcakes. Make sure they are cooled completely before frosting or the frosting will melt right off. I also recommend either using white cupcake liners (that will kind of bake into the cupcakes) re moving them all together before frosting.

If you’re not using cupcake liners when baking the cupcakes at all, make sure to grease the cupcake pan well so they come out cleanly. Or better yet, use a silicone cupcake pan that doesn’t stick at all!

Start by beating the butter in a large bowl until it is light and fluffy. I typically do this with an electric mixer or in the bowl of my stand mixer on medium speed to start then high speed. You really want the color to change color to a lighter yellow that is soft and fluffy.

Then add powdered sugar (aka icing sugar) and beat in the bowl of a stand mixer until combined.

Add the vanilla extract and milk, and beat until frosting is smooth and a good piping consistency.

Divide the white frosting equally into two separate bowls. Add orange food coloring to one small bowl and red to the other. Mix each bowl until color is uniform throughout.

Now place orange frosting on one side of a large piping bag that’s fitted with a large star tip and add red frosting on the other side. Piping the two side by side will give you that cool fire effect you’re looking for!

If you don’t have a piping bag, you can also use a plastic bag with a zipper top with the tip placed into one of the corners and the corner cut off. I do that all the time!

Place a small dab of frosting in the center of each cupcake then break the pretzel sticks in half and arrange 6 pieces with broken end in the frosting and the other end pointing towards the outside edge of the cupcake like wood in a campfire.

If you don’t have enough for six, even 4-5 sticks will do. Or just break them into smaller pieces so you can get all six.

Adding the small dollops of frosting on top of the cupcakes will hold the pretzels down while you pipe on top of them!

Next swirl the frosting in circular motion over the end of the pretzels in the center of the cupcake to create the “fire.” Try to complete the frosting in one fluid motion instead of pulling up and starting again. This will give you that seamless fire look you’re going for.

PIpe swirls on the tops of each of the cupcakes then move on to the marshmallow sticks.

Then place the pretzel stick on top of the frosting “fire,” carefully so you don’t totally destroy the frosting fire.

And there you have it – perfect cupcakes that look just like marshmallows being roasted over a campfire!

Place them all on a cake stand, a plate, or a platter of some sort and serve immediately! If you’re not serving immediately, store in a cool place so the buttercream doesn’t melt.

The cute cupcakes combined with the fiery buttercream on top makes these a great addition to any camping party, a send-off treat at the end of summer camp, or a fun dessert for a camping trip!

Freeze the cupcakes before they’re frosted and place in a freezer bag for up to three months. Then when you’re ready to frost, just take them out and let them come to room temperature before decorating.

Be careful to split the frostings onto either side of the piping bags without mixing them up a lot or you’ll end up with whatever color red and orange together make, not the swirls you really want.

Toast the mini marshmallows quickly with a kitchen torch if you really want to be gourmet and have “toasted” marshmallows on top of your cupcakes. I was too lazy to do that, but it’d be a fun touch!

Store cupcakes in an airtight container of some kind for up to five days. No need to refrigerate since you’re using a buttercream frosting on these!

How do you make a cupcake fire?

Add pretzel sticks to the top of a cupcake to give you the look of logs in a campfire. Then simply combine two colors of frosting – red and orange – in a piping bag and then swirl the colors on top of the cupcake! Add a pretzel stick with a mini marshmallow for good measure if you want it to look even more like a campfire!

Can you freeze campfire cupcakes?

If you’re hosting a camping themed party, make sure to check out these delicious camping recipes and camping party ideas!

These fun campfire cupcakes combine a delicious chocolate cupcake with a fiery frosting and a marshmallow roasting on a pretzel stick! 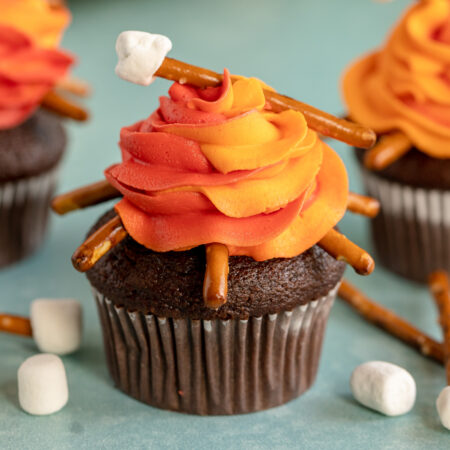 Be careful to split the frostings onto either side of the piping bags without mixing them up a lot or you’ll end up with whatever color red and orange together make, not the swirls you really want. Toast the mini marshmallows quickly with a kitchen torch if you really want to be gourmet and have “toasted” marshmallows on top of your cupcakes. I was too lazy to do that, but it’d be a fun touch! Store cupcakes in an airtight container of some kind for up to five days. No need to refrigerate since you’re using a buttercream frosting on these! 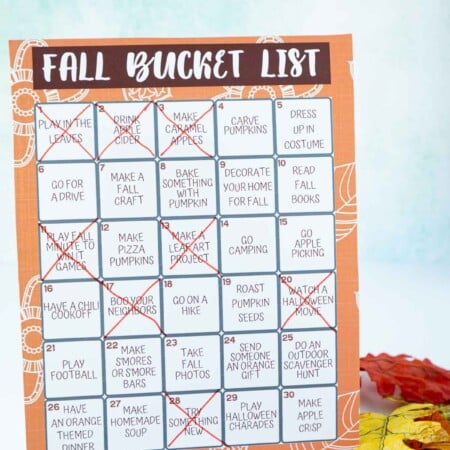 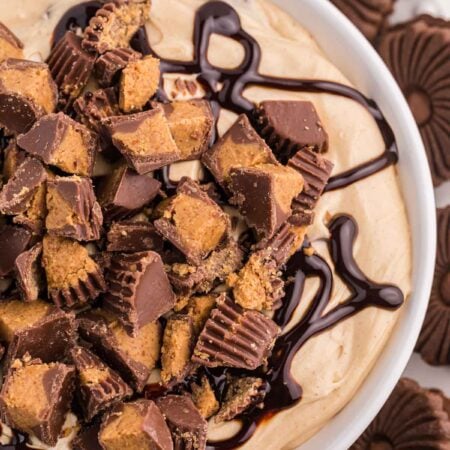