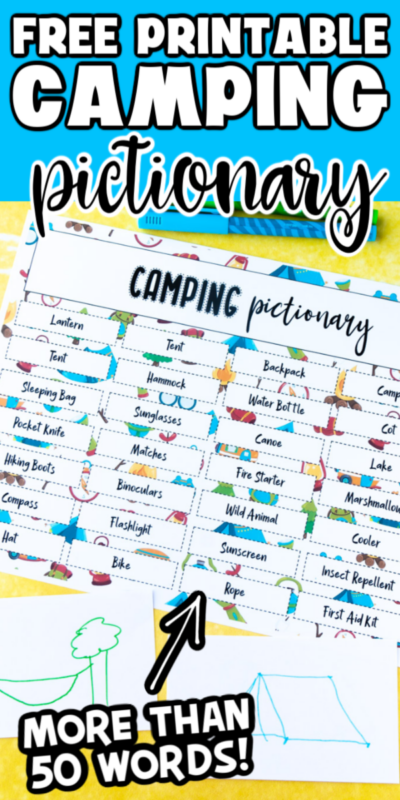 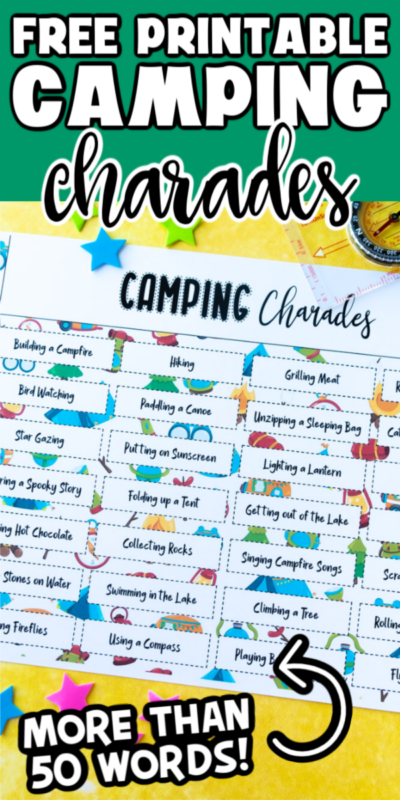 Play camping charades or pictionary to add an element of fun to a campout or camp themed party! Use the free printable camp charade themed words to play these fun games with the entire family!

Last year I shared some of my absolute favorite camp games. Little did I know that this year that camping and playing outdoor games with large groups would be restricted.

Today I’m sharing a couple of printable camping games you can play with a smaller group or just your family. Or with larger groups when camp themed birthday party games and group campouts are a thing again!

So grab yourself some cookie s’mores, build a candy campfire, and play these fun printable camping games for one of the best indoor campouts ever!

I’ve got three different variations of camping charades for you! Here are more fun charades ideas if you need more ideas to try!

I’ve got an entire list of camping themed phrases at the bottom of this post that are perfect for camping charades! Things like making a s’more, grilling meat, putting up a tent, etc.

And if you want even more words, you can use the objects from the camping pictionary game too, just know they’re nouns (e.g., lantern) rather than phrases.

The first of the two games is a good ole fashioned game of camping charades.

Split into two teams and pick someone from one of the teams to go first.

That person acts out one of the camping charades words and their team tries to guess it. If the team guesses it before the timer goes out, their team gets a point.

Switch teams and someone on the other team does the same thing. Keep switching teams and playing until you run out of words to guess or you decide to stop.

Change things up slightly from the regular charades game by having teams try to get as many words acted out and guessed before the timer runs out instead of just one.

If you want to play this variation, you can do it in two different ways. One – have the person who is acting out the words just pick out a new word and keep going to get as many words as they can in one minute.

Or switch it up and have the person who guesses the phrase correctly run up and be the actor for the second word. Keep going and switching who is acting (based on who guesses correctly) until the timer runs out.

Want to try something different than standard charades? Reverse charades is one of my all-time favorite party games, and it works great for camping charades!

I feel like charades and pictionary are pretty much the same thing except in one you act out words and in the other you draw words. Because they can use similar word lists, I decided to include camping pictionary in this post as well!

All you need to do for camping pictionary is print out the set of pictionary words included at the bottom of this post. You’ll also need:

Split your group into two teams. Pick one person from one of the teams to go first and give them a word. They have one minute to draw the word and try to get their team to guess what they’re drawing.

The team gets a point if they guess the correct word and then teams switch. Keep switching until you’re out of words.

Team with the most points wins!

The list of pictionary words includes mostly nouns (e.g., lantern, tent, s’more), but if you want to make it a little more advanced, toss in the camping charades words as well and make teams guess actually phrases.

Coming from experience, drawing phrases is definitely harder than objects! Perfect for teens and adults.

Finish it off with a round of s’mores bars for the winners!

If you need more words for either game, check out this camping scavenger hunt for even more camping inspired fun!

Enter your first name and email address in the form below to get the free printable camping charades and camping pictionary words. There will be a 2-page PDF with two sets of words.

As I mentioned above, you can use the charades and pictionary words interchangeably, but it will make it slightly more challenging if you use phrases for pictionary. 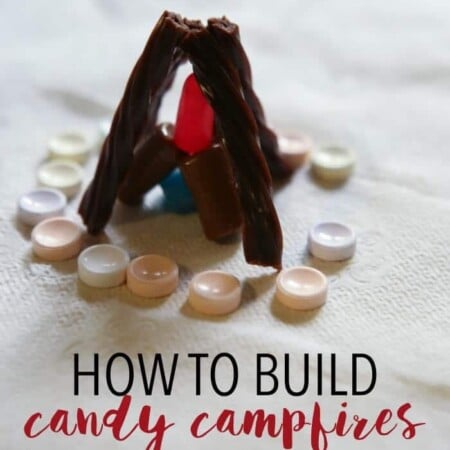 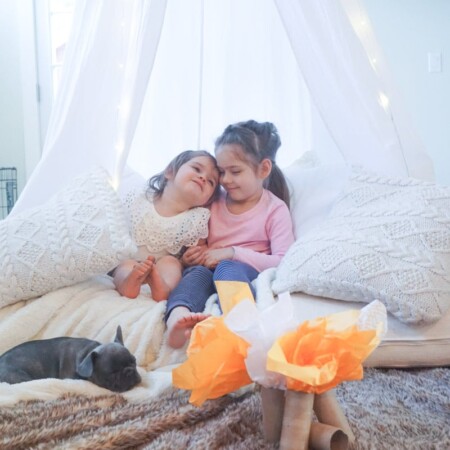