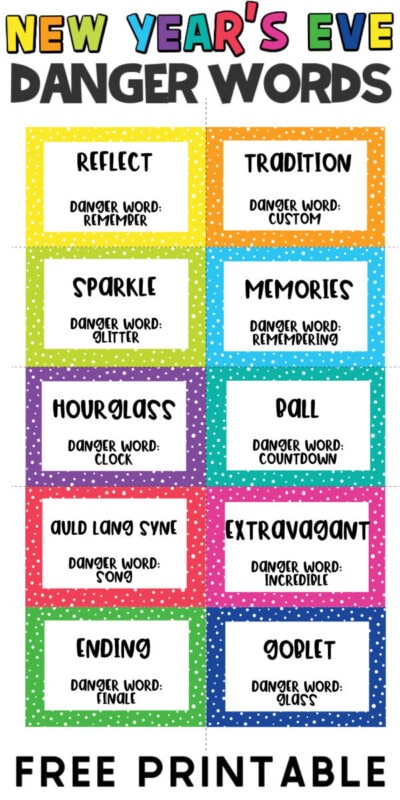 This fun New Year’s Eve danger words game will have players trying to get their teammate to guess a word without accidentally guessing the danger word! It’ll be your new favorite game to play with family and friends!

But danger words? They weren’t happening.

Then I got an email last week telling me how much fun one of my readers had with my Christmas danger words. She asked if I was doing New Year’s Eve danger words and of course I said yes.

So here you go – New Year’s Eve danger words. I may not have been planning on creating this game this year, but I’m glad I did. I’ll likely be using it in one of my New Year’s Eve countdown boxes with my own family!

And p.s., if you’re not familiar with what danger words is, you’re in for a treat. The basic idea is that you have to get your partner to guess the big word on each of the cards without them accidentally guessing the danger word on the bottom of the card.

There’s more to it than that, just know it’s a lot of fun! And keep reading for more details!

Unlike some of my other games, like these New Year’s Eve minute to win it games, you really don’t need anything at all to play New Year’s Eve danger words.

Well nothing except the printable cards at least. And you can get those right at the bottom of this post or if you’d rather not fill out the form, you can get a copy in my shop here.

Before you play, there are a few things you need to do to get setup.

Cut out the individual cards (try not to look at them too closely if you’re going to be playing or you’ll feel like you’re cheating and not want to play.

Put the cards in a bag or bowl until you’re ready to play.

Give each team a number (team 1, team 2, team 3) to keep track of who will go first for giving clues.

You can see an example of some of the cards in this post. The idea is that the danger word is typically going to be something that would have similar clues you’d use to get them to guess the actual word.

Starting with team #1, the clue giver should give a ONE WORD clue to their teammate to try and get them to guess the word, without guessing the danger word.

Once team 1 gives their clue, their teammate should guess what they think the word is. If they get it correct, the round is over and they win a point for their team. This very rarely happens on the first try just so you’re aware.

If they guess incorrectly, team 2 would then get a chance to give a word clue and guess the word following the same rules as above.

Go through the rest of the teams until everyone has had a chance to give a clue and guess. If no one has gotten it yet, go back to team 1 and start again all while trying to get the same word.

It’s important for all of the teams to listen during the clue giving because clues can help (or confuse) players who are guessing the word.

IF at any point a team guesses the danger word, the round is immediately over. If you’re playing with just two teams, the other team would win a point.

If you’re playing with more than one team, no one wins a point for the round. Or you can give all other teams a point so there is some sort of punishment for getting the danger word.

Or you can just give that person a “punishment” that can added a funny element to the game. These are optional but can be funny!

Some of our punishments in the past have included things like:

Don’t forget to let people know what they’re getting into if you’re going to do a messy punishment – it might impact what people wear to play!

This gives everyone a chance to start, which can be an advantage for easy words or a disadvantage for tough ones that definitely won’t be guessed on the first try.

You can either play until all the cards are gone or until you’ve completed a designated number of rounds. Keep track of points throughout the game where people can see them.

A big white poster board + permanent marker works well for a large scorecard, or you a big dry erase board with dry erase markers is another favorite.

If you don’t have any of those things, a regular pen and paper works too! Just make sure to let the teams know regularly what the score is.

How to play in a large group

There are two easy options for playing this with a group larger than 12 people.

Instead of splitting into teams of two, just split your group into teams with even numbers. Limit the number of total teams to six or less for optimal playing.

Now you can choose from one of these three ways to play the game based on how many people and who is playing:

You want everyone to get a chance to play both roles and be involved or it won’t be fun for anyone! 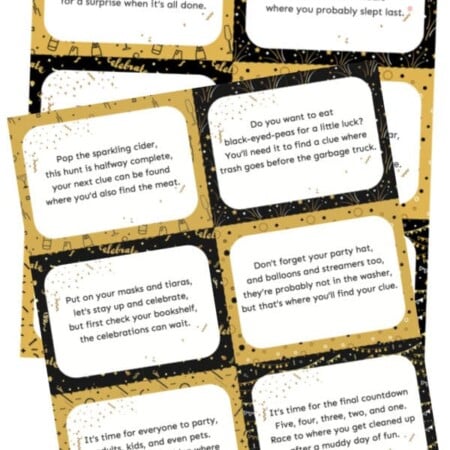 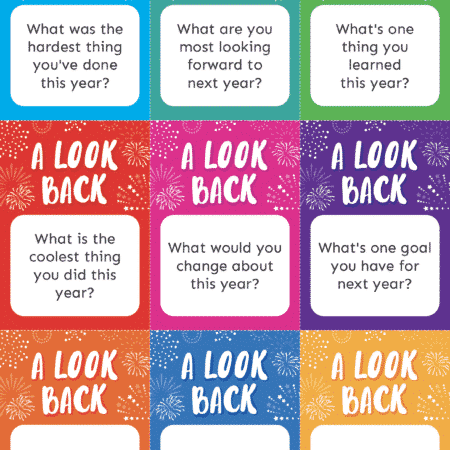