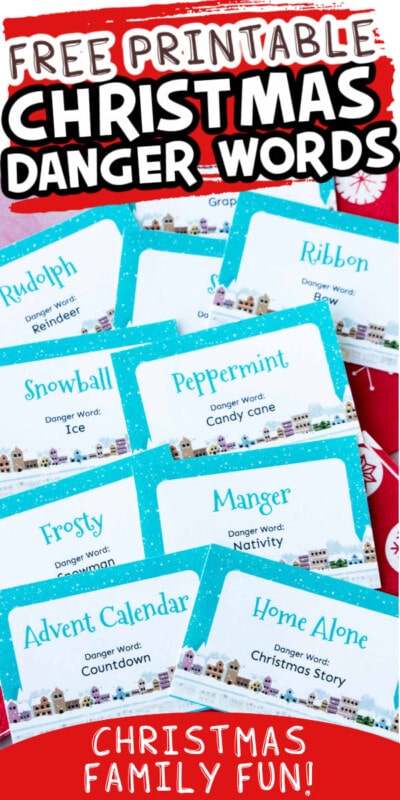 This Christmas danger words game will have your entire group laughing hysterically as people try to guess words while avoiding the danger word! You never know what’s going to come out of someone’s mouth!

Normally I am coming up with all sorts of new gift exchange games and large group Christmas party games for the holiday season.

This Christmas danger words game is one of my current favorites because it works with any age and is perfect for a family game night! Or even a game night with a couple of extra friends. And no prep necessary other than printing the cards.

Plus, it’s a game I borrowed from one of my favorite celebs – Ellen DeGeneres – just turned into a Christmas version. And I don’t have the cool gun shooter thing to spray people in the face with pies, whipped cream, and cranberry sauce.

Instead, I just have free printable cards you can download to play with your family. If you want to add some peanut butter pie to toss in someone’s face if they get a danger word, more power to you!

I heard from so many people that they loved my Thanksgiving danger words game, so it’s time for a Christmas rendition!

All you need are the danger word cards (get them at the bottom of this post or in my shop here) to play.

If you want to add a consequence element, you can always use pie plates filled with whipped cream, a set sponge, or something else simple.

Oh and you might want prizes but if you’re just playing with your family, you probably don’t need them. If you want prizes, check out this Christmas Family Feud game for prize ideas.

First things first, you need to get the game all ready to go.

Start by cutting out the individual cards (try not to look at them too closely if you’re going to be playing or you’ll feel like you’re cheating and not want to play.

Put the cards in a container of some sort until you’re ready to play.

Give each team a number (team 1, team 2, team 3). You’ll need this to keep track of who goes first for clues, etc.

Read my section below on playing with larger groups if your group is larger than twelve peopel! Or you can just do this Christmas trivia, Christmas music bingo, or this Christmas would you rather game instead!

Once you have your teams – pick one player on each team to be the clue giver and one players to be the first guesser. Put guessers on one side of the room and clue givers on the other so they can all see the card.

Pick out one of the clue cards from the container and show it to all of the players giving clues.

If a card has more than one word on it in a phrase (e.g., Home Alone), you can tell the guessers that it is a multiple word phrase so they don’t think they can only guess one word.

Starting with the first team, they should give a ONE WORD clue to their teammate to try and get them to guess the word, without guessing the danger word. There are just a few rules for giving clues:

Once team 1 gives their clue, their teammate should guess what they think the word is. If they get it correct, the round is over and they win one point for their team.

If they guess incorrectly, team 2 would then get a chance to give a word and guess the word – same rules apply as above.

IF a team at any point guesses the danger word, the round is immediately over. If you’re playing with just two teams, the other team would win a point.

Depending on your group and how you want to play, some of the punishments we’ve done in the past include:

If you’re going to do one of the physical punishments, make sure players know what they’re getting into before you play so they can dress accordingly. No one wants to get pie shoved in their face with a nice blouse on.

Switch who is guessing and who is giving clues after each word is guessed or failed to guess because someone said the danger word. No need to switch spots or sides of the room – just switch roles.

The other big change with subsequent rounds is that you need to start at the team after the one who started the game before. So for instance, if Team 1 gave the first clue in round 1, Team 2 would give the first clue in round 2. You want to do this rather than start at the team after the team that guessed the answer correctly so every team gets a chance to start.

You can either play until all the cards are gone or until you’ve completed a designated number of rounds. Keep track of points throughout the game where people can see them.

A big white poster board + permanent marker works well for a large scorecard, or you a big dry erase board with dry erase markers is another favorite.

If you don’t have any of those things, a regular pen and paper works too! Just make sure to let the teams know regularly what the score is.

How to play in a large group

While this game is typically played in pairs, it’s easy to play in a large group as well! There are two easy options depending on what you’re looking for.

Split your group into teams with even numbers – stick to six teams or less. These teams will need even numbers but can have more than two.

You have a couple of different options for how to play with larger teams: 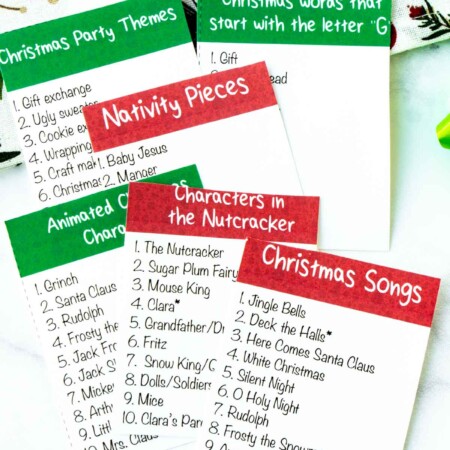 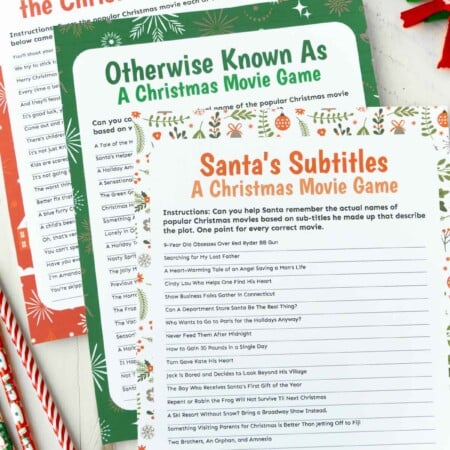