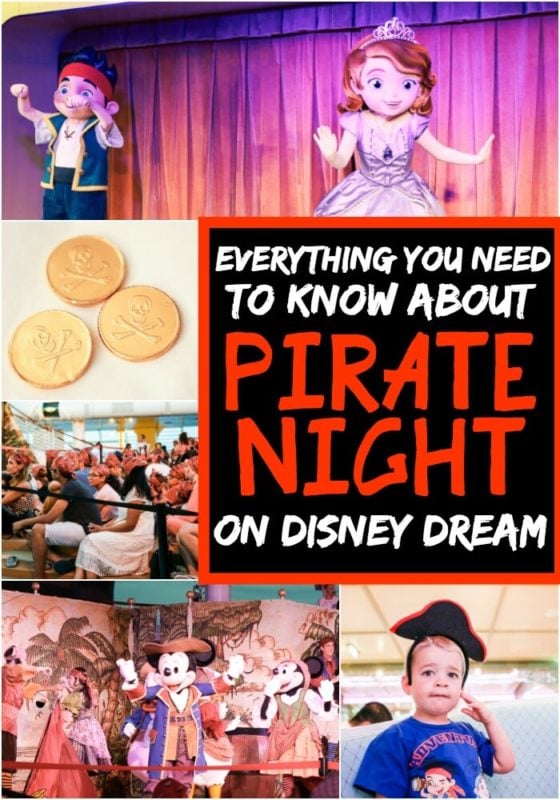 One of my favorite things about our cruise on the Disney Dream in August was pirate night, or really pirate day. Pirate night on Disney Dream is just one of the things that made it so magical!

Where else can you see thousands of people dressed up like pirates, go to a pirate and princess party, and even learn how to be part of a Mickey’s pirate crew yourself?

I’ve been on a lot of cruises on different cruise lines, but Disney cruises definitely do entertainment best. These are just some of the fun ways you can celebrate pirate night on the Disney Dream. If you’re not sailing on the Disney Dream, check out your particular itinerary for details on what pirate fun Disney has in store for you. 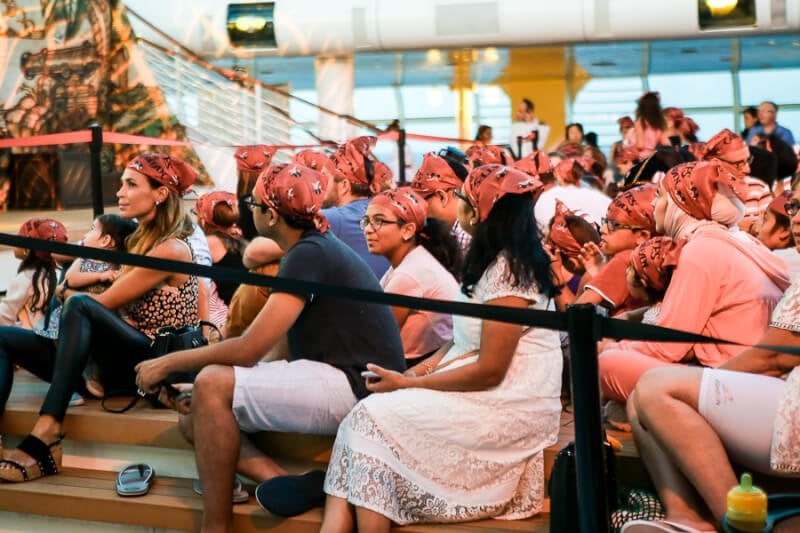 A Disney cruise is pretty much an extension of Disney World when it comes to dressing up. I missed the boat and didn’t bring our matching Disney shirts or any pirate garb other than one pirate headband I picked up at the dollar spot a few years ago that my son loves.

I wish we’d brought our own pirate inspired outfits to participate in the fun. But don’t worry if you forget like I did, Disney actually provided everyone with pirate bandanas

with our daily itinerary so no one has to miss out on the fun! 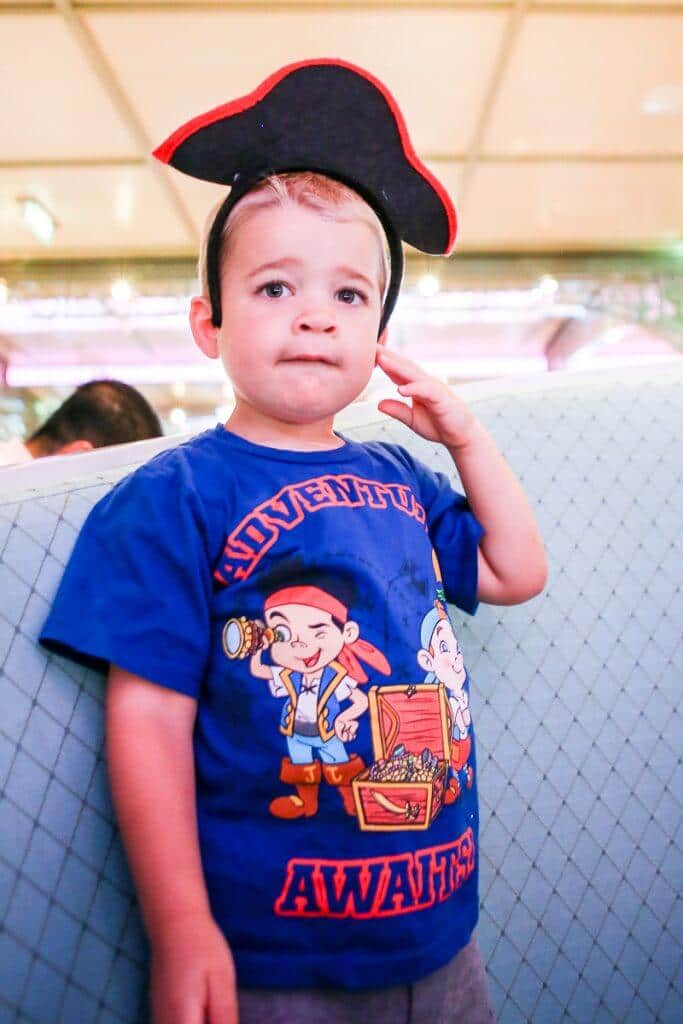 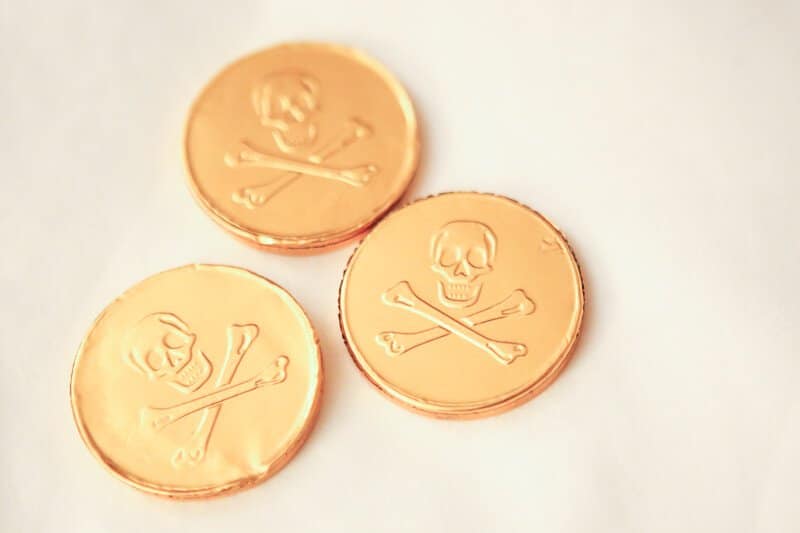 Have a Pirate Movie Marathon

Before your cruise, get your family excited for Disney pirate night by watching a marathon of Jake and the Neverland Pirates

, Peter Pan, or Pirates of the Caribbean movies, depending on the ages of your kids!

Or even better, watch them in one of the various movie theaters on board! On pirate day, they played Peter Pan

, Pirates of the Caribbean

, and even Muppet’s Treasure Island

Go to the Pirate and Princess Party

One of my favorite moments of our entire cruise on the Disney Dream was the pirate and princess party, a party led by Captain Jake and Princess Sophia.

My son is a huge Jake fan, and he loved watching the characters and all of the other kids have a princess and pirate dance party. The pirate and princess party was in the middle of the afternoon on pirate night, but it’s not to be missed if you have a Sophia or Jake fan.

Be forewarned, it’s not just for the kids. One of the songs in our show called for a little parent participation and dancing as well, so bring your dancing shoes! And cameras. 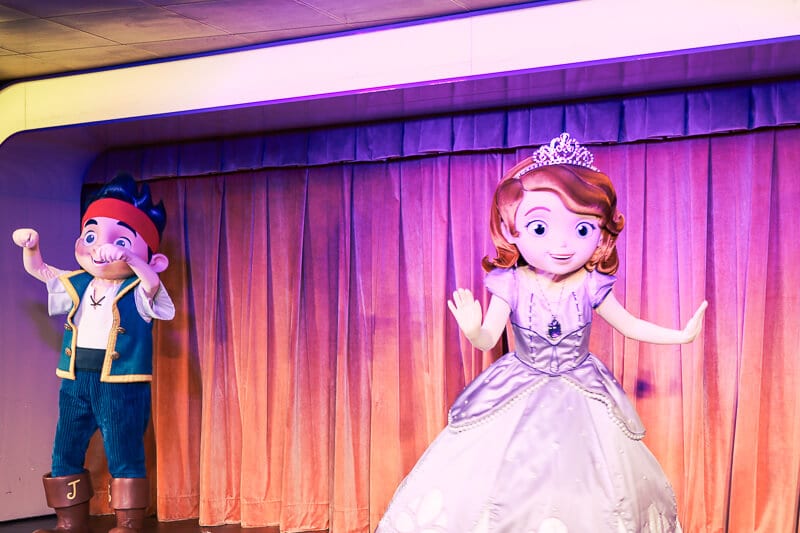 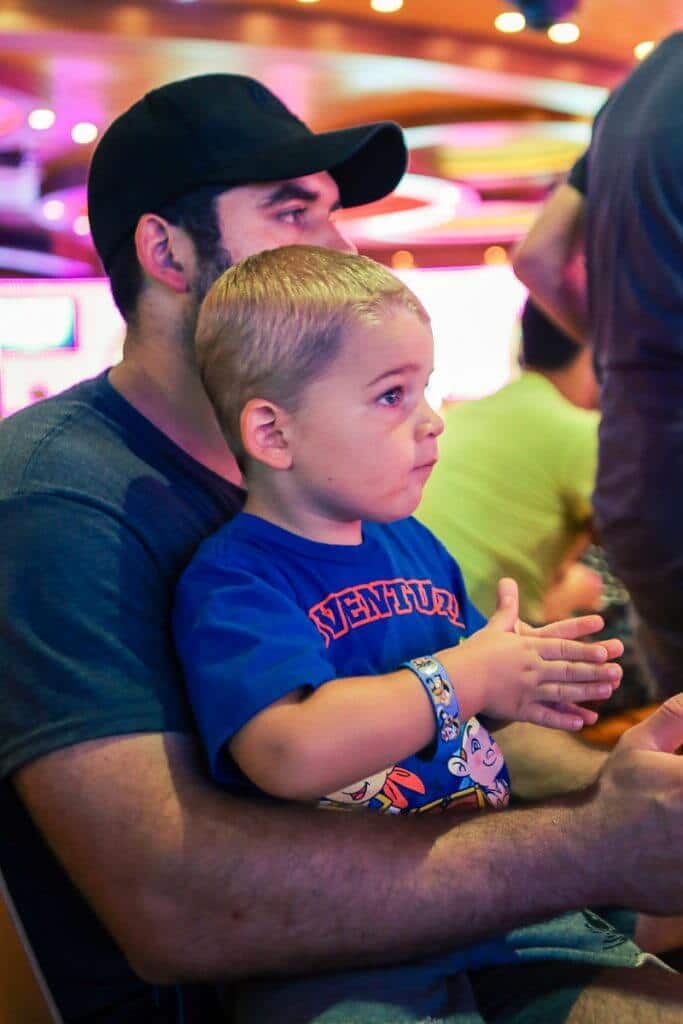 Much of the regular entertainment becomes pirate themed. From the late night A Pirate’s Life for Me action packed game show to pirate games before the nightly stage show, there are plenty of chances to join in the pirate fun. Pull on your bandana, practice your yo-ho yo-ho, and head to one of the many pirate themed games.

One of the coolest things about Disney cruises is that you can stand in line to do character experiences throughout your trip. My son is actually afraid of most characters other than Winnie the Pooh and friends, so we didn’t do any – but you can.

On pirate day, there were a ton of options for pirate character greetings. Everyone from Jack Sparrow to Peter Pan and even Mickey’s Pirates of the Caribbean! If you have a pirate fan, definitely make time to get a picture of your little pirate dressed with one of their favorite pirates.

Another great option for character experiences if you don’t want to wait in line is to send your kids to the Oceaneer’s Lab or Oceaneer’s Club during one of the awesome pirate activities they have going on throughout the day. On our pirate night, there were fun activities such as a get the hook activity where kids had to become detectives looking for the missing hook, and a so you want to be a pirate hour.

The secret is that bigger themed activities like those often mean that an associated character will come participate. It’s a great way to give your kids a chance to actually hang out and play with their favorite characters rather than just taking a quick picture.

The only thing to remember is that most of those activities are just for kids, unless your itinerary says open house, you’ll have to drop them off and go.

The big highlight of pirate night is Mickey’s Pirates of the Caribbean show. It starts with pirate games on the deck and immediately moves into a fun outdoor stage show featuring Mickey and his pirate buddies.

Guests are invited to participate as Mickey and friends teach guests how to be part of his pirate crew. I think the idea is to have everyone participate but it a was a little tough to do a pirate jig when the deck was packed with pirate passengers. We did shout out our yo-hos though when we were taught the secret pirate password.

After pirate crew lessons, the real fun begins as Captain Hook appears out of nowhere and tries to steal from Mickey. The show is fun, lively, and an example of why Disney is the leader in cruise entertainment. And I love how we had to prove that we were part of Micky’s pirate crew by using the pirate crew secrets we’d just been taught. My son loved it. 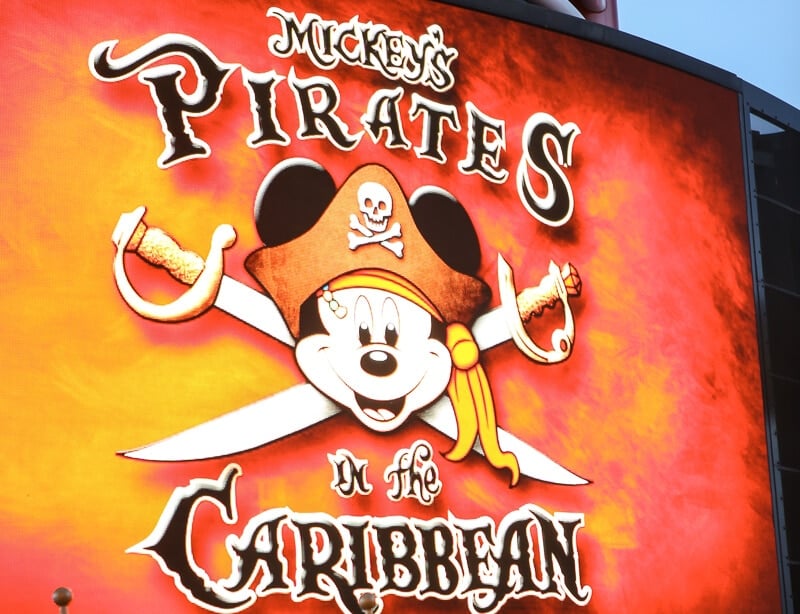 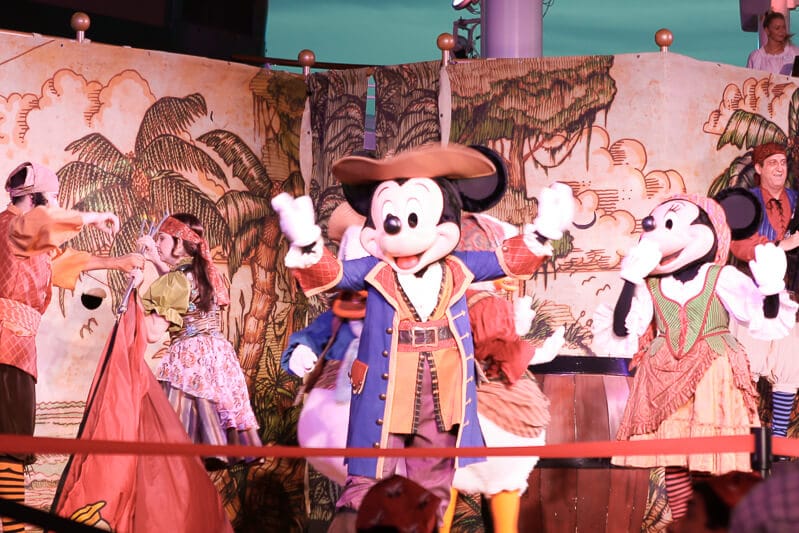 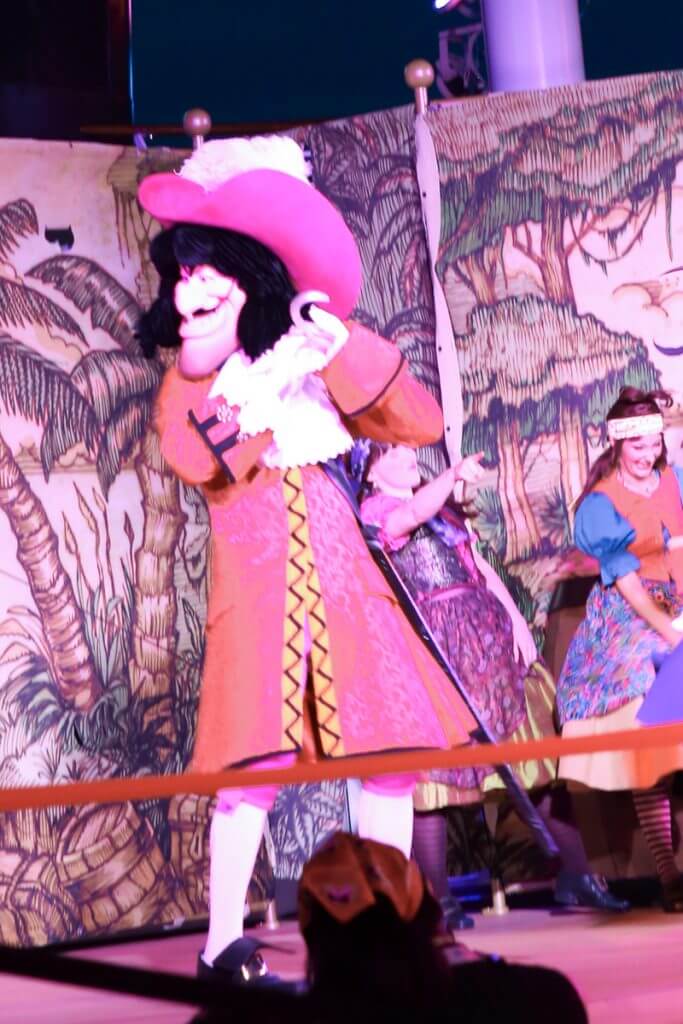 Last but not least, finish off the night with a buccaneer bang. The Disney Dream was the only cruise I’ve ever been on that shot fireworks right off the ship. And with nothing else around, they were probably the closest and brightest fireworks I’ve ever seen.

It’s not as impressive of a show as say the Wishes show at Walt Disney World, but it’s impressive in the fact that you’re on a cruise ship, watching fireworks. Definitely a reason to keep the kids up a little late.

You thought I was done with fireworks didn’t you? But no, Disney pulls out all of the stops and actually serves a late night pirate’s buffet complete with turkey legs and other yummy snacks that a pirate might eat. It starts right after the fireworks show, so I recommend sitting closer to Cabanas if you’re planning to partake of the late-night pirate delights.

If you can’t stay up late enough for turkey legs, no problem. Our main seating dinner in the Enchanted Garden came with paper pirate hats to wear while eating dinner. Almost eating like a pirate. 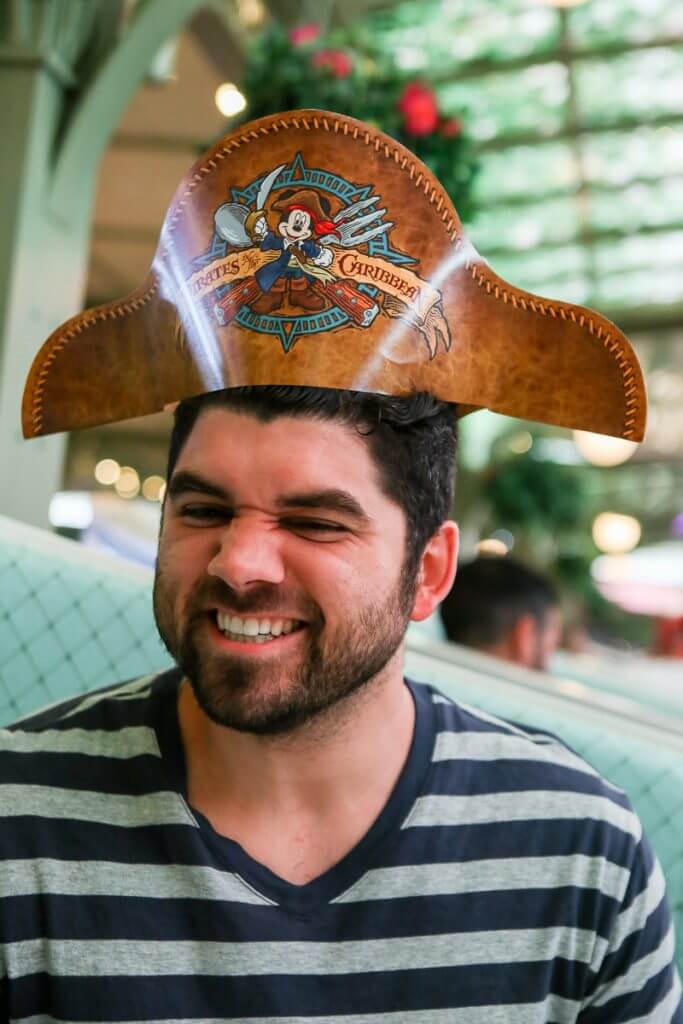 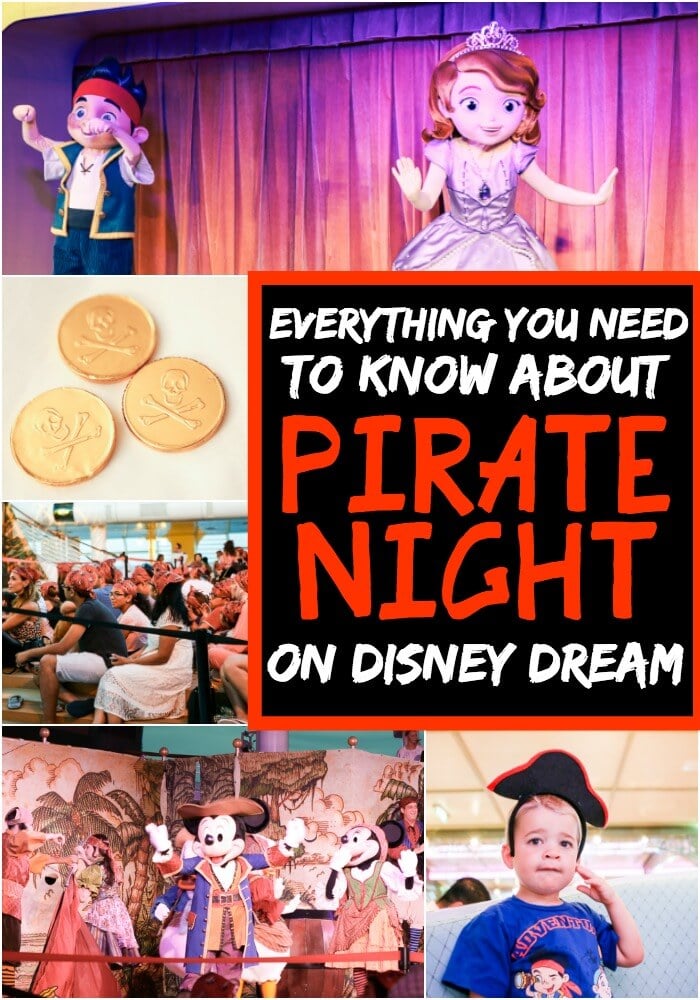 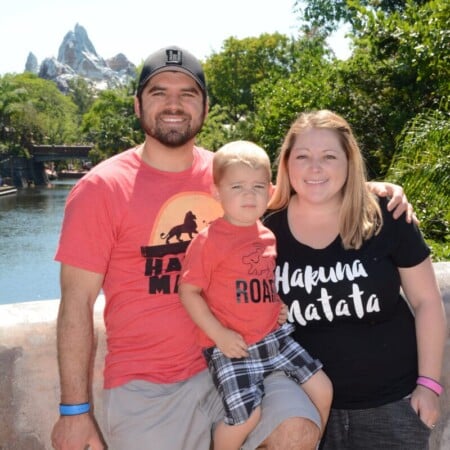 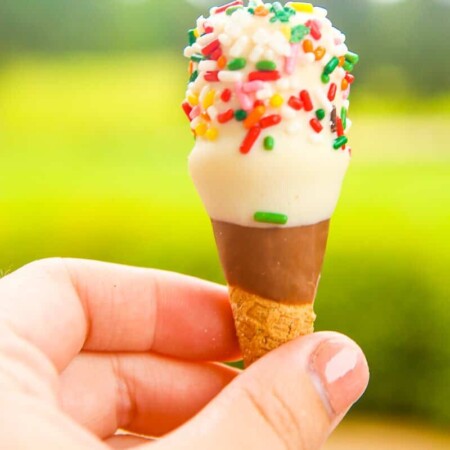 Next Post
11 of the Best Places to Eat in Ocala, Florida