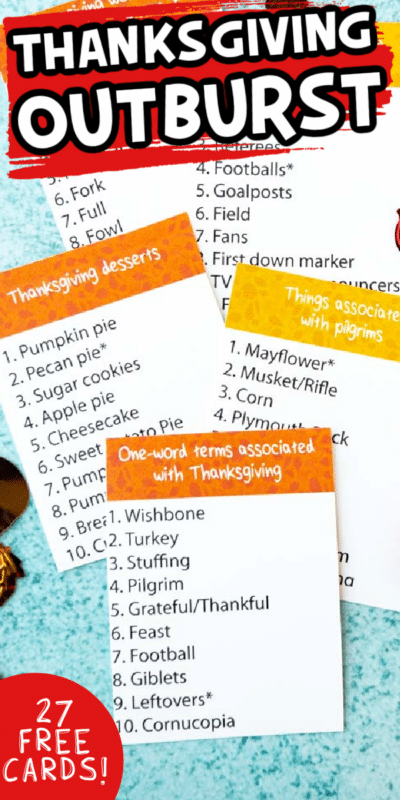 Thanksgiving outburst is a word guessing game that’s fun for the entire family! Simply print out the cards, divide into teams, and play with family and friends of all ages!

One of my all-time favorite board games, okay party games, is Outburst. I love it because while you have to guess items within a specific topic, you don’t have to guess the exact one – you have ten to choose from!

This year for Thanksgiving, I decided it would be fun to make my own set of Thanksgiving outburst cards so families could play at home. All with a Thanksgiving theme!

If you’ve never played Outburst before, the basic idea is that as a team you have to try and guess ten random words associated with a specific topic. You score points for any of the words you guess on the card.

And the team that can get the most points wins.

That’s a very simplified version but what you really need to know is that it’s fun, it’s simple to setup (just print and play), and it’s good for all ages! Even the youngest players can come up with a Thanksgiving food (hello turkey and mashed potatoes!).

It’s definitely going on our list of Thanksgiving games to play this year!

The beauty of this game is that you really don’t need much to play. It’s not quite as fancy as the actual Outburst board game (one of the best adult party board games) with it’s secret cards and scoring slider, but it’s a lot easier and cheaper!

Oh and p.s., if you have the actual Outburst game already – keep it. That thing is vintage and apparently they’re not really being sold that often anymore! They’re expensive on Amazon at least.

All you’ll need for my version of the game is:

Thanksgiving Outburst is actually really simple to play. It just takes a minute to setup and then you’re ready to go!

But before you play, you need to cut out the cards – try not to look at them or study them too hard if you personally will be playing!

Cut out all of the cards (there are 27 of the) and put them in a pile face down so no one can see the topics or answers.

Divide evenly into two teams and have the two teams sit or stand on opposite sides of the area you’re playing in.

Choose one team to guess first, the other team will be marking off answers first. For this post, let’s just say Team A is going to guess first and Team B will be holding the card.

To play, Team B would pick a card from the top of the pile. Each card will have a Thanksgiving themed topic, a list of 10 words, and a star by one of the words.

Team B reads the topic at the top of the card to Team A (guessing team) then flips the one-minute timer. Team A must then just start guessing words associated with that topic.

Some of the topics are very specific – NFL football teams – and some of them are a bit more obscure – one word terms associated with Thanksgiving. And for a lot of the cards, there are going to be words that could possibly go on the card but isn’t there.

The team should keep guessing for the full minute to try and get as many of the answers on the card as possible.

Be lenient when it comes to marking off answers on the cards. If someone says dressing for instance, that also counts for stuffing. If they say Cowboys for NFL teams but not Dallas Cowboys, still counts. This is supposed to be fun – not an argument creator!

As a team guesses the answers, mark them off with a pen or some other marking item so that you remember exactly how many they guessed. Believe me, you need to mark them off – you’re not going to just remember.

When the minute is up, Team B would say how many answers on the card Team A guessed correctly. Each correct guess is worth one point for Team A. Team B would then read off any of the words on the card that Team A did not guess.

If there’s a dispute where a team says they guessed a word and the other team says they didn’t, just give it to the team guessing. This game can get crazy and include really fast guessing, the card holding team can definitely miss something that was said. Just be honest and play fair so everyone has fun. If you need something slower paced, maybe try this holiday Family Feud game instead!

Team A would get one point per correct answer and if they got through the entire card, they would get three bonus points.

Before switching teams, you can also add in one more element for earning bonus points. Each of the cards has a randomly selected word with a * next to it. If the team guesses the word with the * next to it, they get one bonus point.

OR if you want to add even more points into the game, have them roll a six-sided die if they get the * word. They then get the number of bonus points that matches the number they roll on the die. So if they rolled a six, they would get six bonus points.

After all the points have been totaled for the round, switch which team is guessing and which team is holding and marking the card.

Then play the exact same way except reversed. Keep switching back and forth playing cards until someone wins.

Before the game decide how you want to decide a winner. There are three different options for winning:

Want more Thanksgiving fun for the entire family? Try one of these games!

If you’d rather not fill out the form, you can get a copy in my shop here! 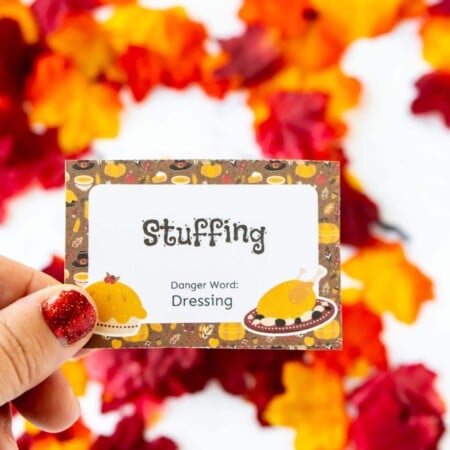 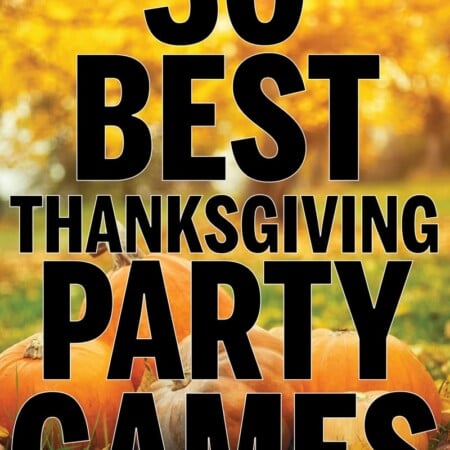