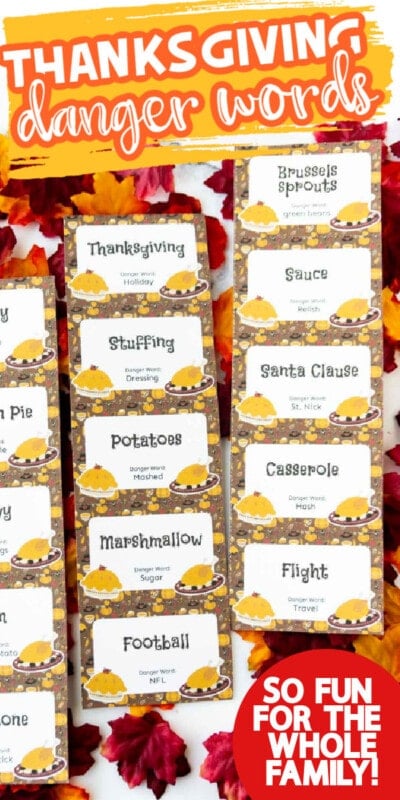 This Thanksgiving danger words game will have teams competing against each other to see who can guess Thanksgiving themed words! Just watch out – if they guess the danger word instead, your team loses the round!

One of my dreams in life is to be on Ellen’s Game of Games show. I absolutely adore her and the games are so much fun! Or another dream would be to work for the show and help come up with games – but you know I kind of like my current job, so maybe just be on the show.

I also love my Harry Potter danger words game but this is about Thanksgiving, not Harry Potter games, so anyway.

The basic idea of this game is that you split into teams and players are trying to get their team to guess a word WITHOUT guessing the danger word. It’s hilarious, easy enough that all ages can play, and a great way to break up the eating and football on Thanksgiving.

Plus, I’ve created a bunch of Thanksgiving themed danger word pairs you can use to play so literally all you have to do is print out the cards and instructions then play!

You really don’t need much to play this game – just the danger words, scissors, and a pen and a paper to keep score. Oh and people – you definitely need people!

I love printable games that don’t take much setup at all!

Or if you want to get really fancy, you could buy the actual board game and use the game (they do a sponge in the face or something if you guess the danger word). Then just use these Thanksgiving words instead of the words in the box. Save the words in the box for another day!

First things first, you need to get the game all ready to go.

Start by cutting out the individual cards (try not to look at them too closely if you’re going to be playing – that’s cheating!). Put the cards in a brown paper bag or envelope until you’re ready to play.

Give each team a number (team 1, team 2, team 3). You’ll need this to keep track of who goes first for clues, etc.

Read my section below on playing with larger groups if you have more than twelve people playing! And if that doesn’t work, just try a different game like maybe Thanksgiving charades, Thanksgiving would you rather, or this Thanksgiving dice game.

3 – Split Into Clue Givers and Guessers

Starting with team 1, they should give a ONE WORD clue to their teammate to try and get them to guess the word, without guessing the danger word.

There are a few rules for clues:

Once team 1 gives their clue, their teammate guesses what they think the word is. Is they get it correct, the round is over and they win one point for their team.

If they guess incorrectly, team 2 would then get a chance to give a word and guess the word – same rules apply as above.

Depending on your group and how you want to play, some of the punishments we’ve done in the past include:

If you’re going to do one of the physical punishments, make sure players know what they’re getting into before you play.

After a word has been guessed, you’ll now switch who is giving clues and who is guessing on each team. No need to switch spots or sides of the room – simply switch.

Giving the first clue can be either an advantage or disadvantage depending on what the word(s) are, so you need to keep rotating the starting team.

Continue playing for as long as you want or until all of the danger word cards are gone. Once they’re all gone, whoever has the most points total wins.

I always like to keep a running tally of points somewhere that people can see them. A big white poster board + permanent marker works well for a large scorecard, or you a big dry erase board with dry erase markers is another favorite.

If you don’t have any of those things, a regular pen and paper works too!

Playing with a Large Group

While this game is designed to be played in pairs, it’s really easy to play in a large group! And really you have two pretty easy options depending on what you want to do.

Split your group into teams with even numbers – stick to six teams or less.

You have a couple of different options for how to play with larger teams:

These are some of our favorite Thanksgiving games for the entire family! If you need more, you can always check out my Thanksgiving activities page as well!

If you’d rather not fill out the form, you can get a copy in my shop here. 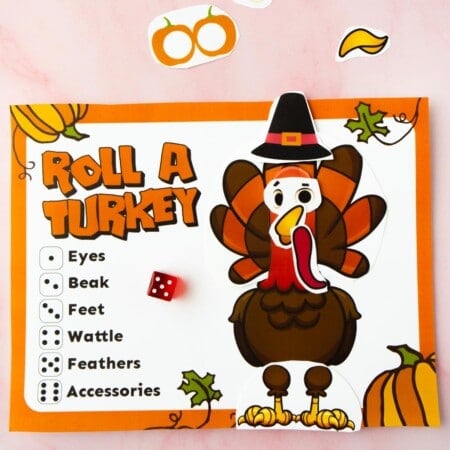 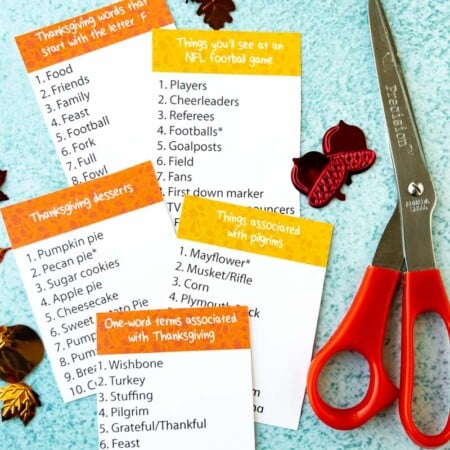