Drop Squad: The Escape is one of the most fun new games for families! This combination strategy and luck game is easy enough that kids can play yet challenging enough that adults will still enjoy it! 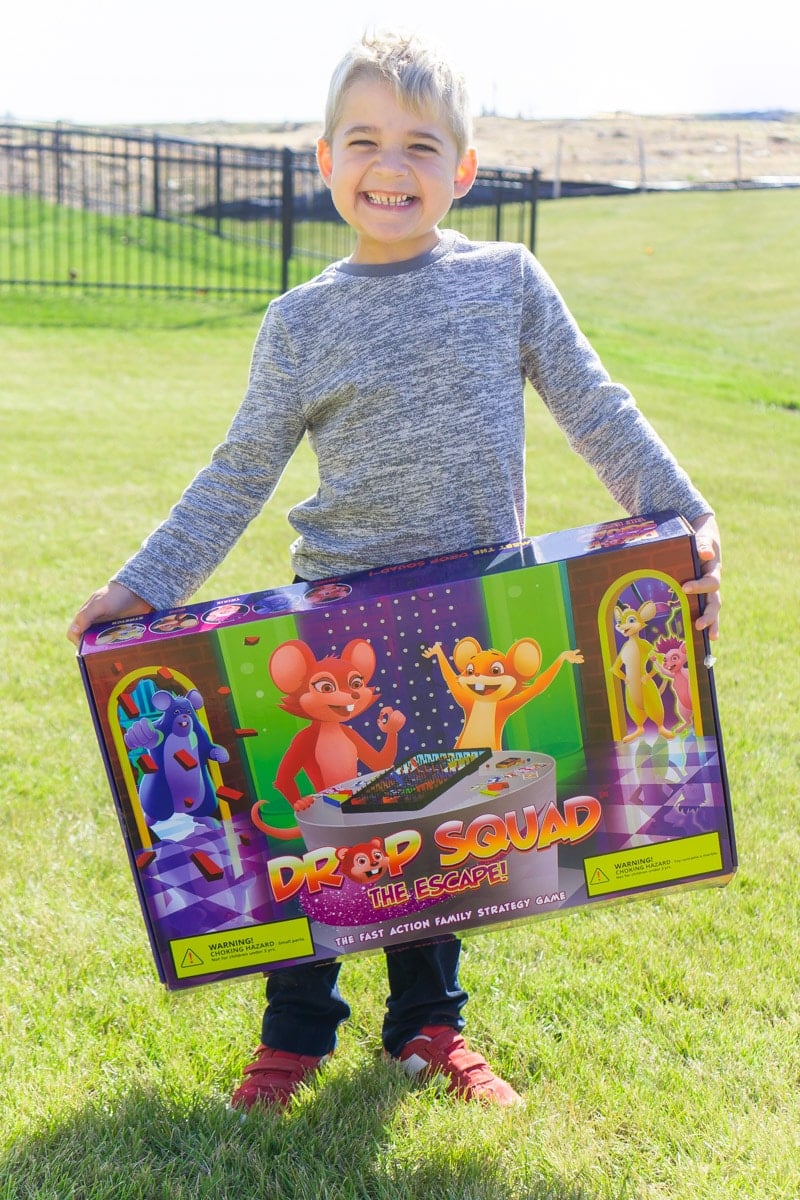 While this post is sponsored by Bush League Games, all opinions are 100% honest and my own. This post also contains affiliate links. If you purchase via these links, I may receive a small commission at no additional cost to you.

I’m a big sucker for games.

I haven’t counted lately, but last time I checked we had upwards of 200 games – board games, card games, party games, you name it.

So when a game comes around that is not only fun for kids, but it’s also fun for adults, I get a little excited.

Drop Squad: The Escape is just that. And don’t be confused by the escape part of the name, this is nothing like an escape room board game.

But let me back up and tell you a bit about the game. Then I can tell you more about why my family loves it!

Drop Squad is a brand new game that was just launched by Bush League Games. Like literally just launched in September 2019. It’s only been available for less than two months so if you’ve never heard of it, you’re not alone.

Your goal? Get your marble to fall into your goal while keeping your opponents from getting marbles into their goals.

You do this by placing and pivoting ramps based on playing cards in your hand.

It’s like Plinko from Price is Right with strategy added. Strategy that’s simple enough that my 6-year-old could understand it.

And like always, I’ve put together a review of my thoughts on the game – the good, the not so good, and who I think will love it! Spoiler alert- most people will love this game! 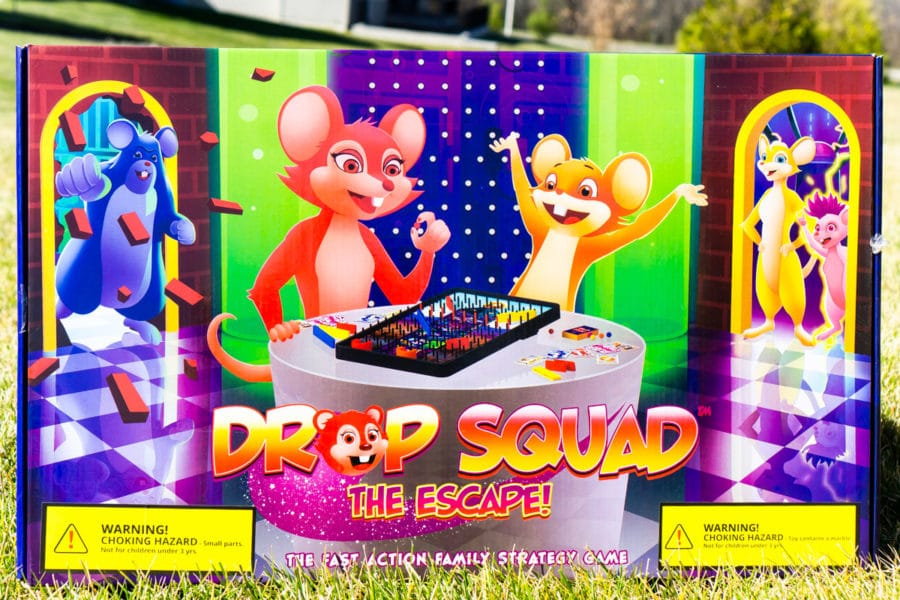 What Comes with the Drop Squad Game

Drop Squad isn’t just a standard size board game that sits on a shelf collecting dust. Drop Squad: The Escape comes in a large box – large enough to hold the table-top game.

Inside of that box you’ll also find:

The thing I love most about the packaging of the game is that it’s all incredibly organized. There’s a place for everything and as my 6-year-old said, and everything in its place.

As an organization freak, I liked being able to put things in their homes. And I also love that you can see if anything is missing if a space isn’t filled.

I only wish some of these other fun board games would follow suit and do the everything has a place type packaging! It’d be so much easier for setup and clean up! 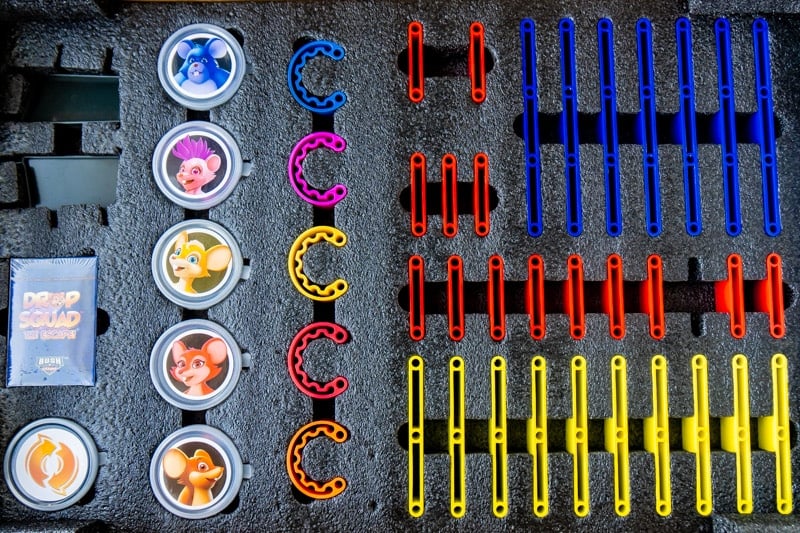 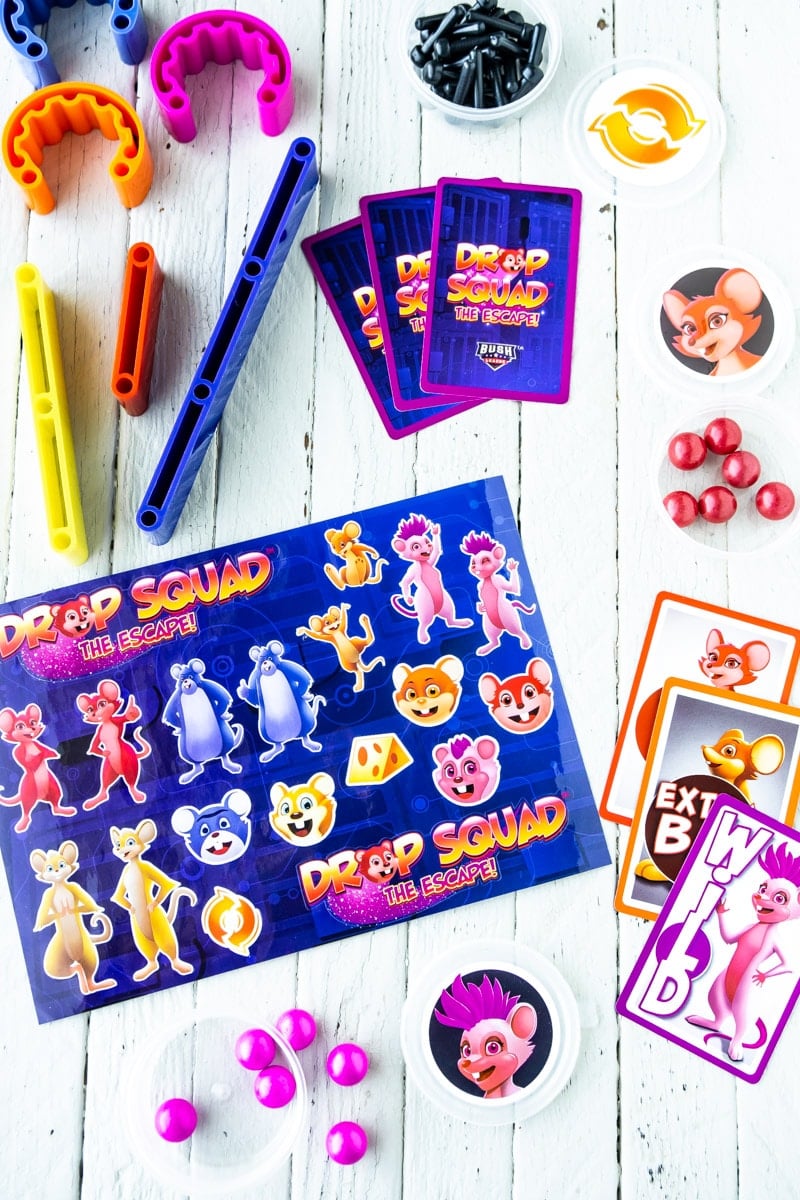 How You Play Drop Squad

I’ve already kind of explained how the game works but here’s a little more detailed rundown on how you play the game.

It’s really easy to learn, which is so important when you’re playing with kids, or you only have a little bit of time to play! Here’s how it works! Or you can watch the video in this post (or here on YouTube) to get an overview of how the game is played.

It’s the little details like this that make me a huge fan of this game!

Once the board is setup, everyone picks a character and takes turns placing their goals on the bottom rungs of the board. These are going to be your goals for the entire game so you need to choose carefully where you put them! 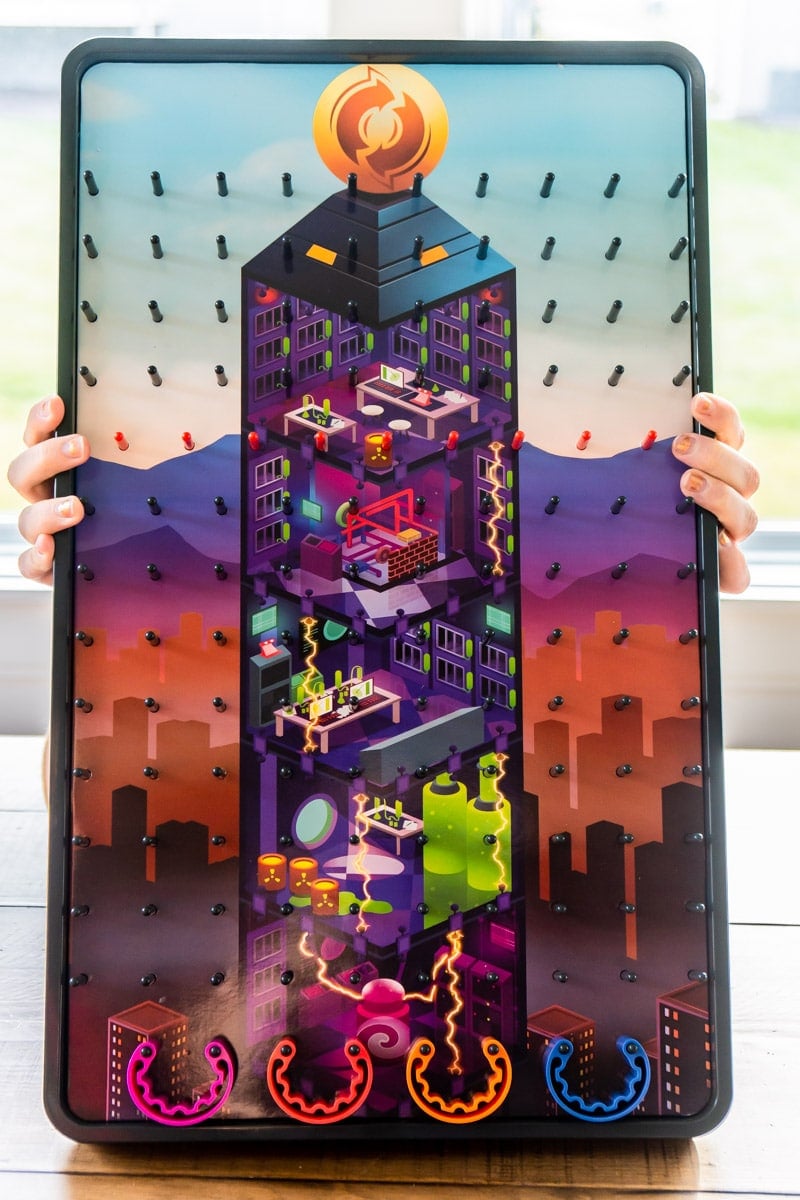 If you are playing a two-person game, you get six cards. With a three player game, you get four cards. Four players? You get three cards.

We played around with it a little bit to see if we could potentially add another card to our decks to make the game last a little longer and the Drop Squad team knows what they’re doing with the card + round numbers.

If you add more cards and rounds, you end up having a really hard time adding any more ramps to the board. There’s just not enough space, especially if you pull a lot of 3 cards.

So stick to the numbers they recommend, it’s that way for a reason. 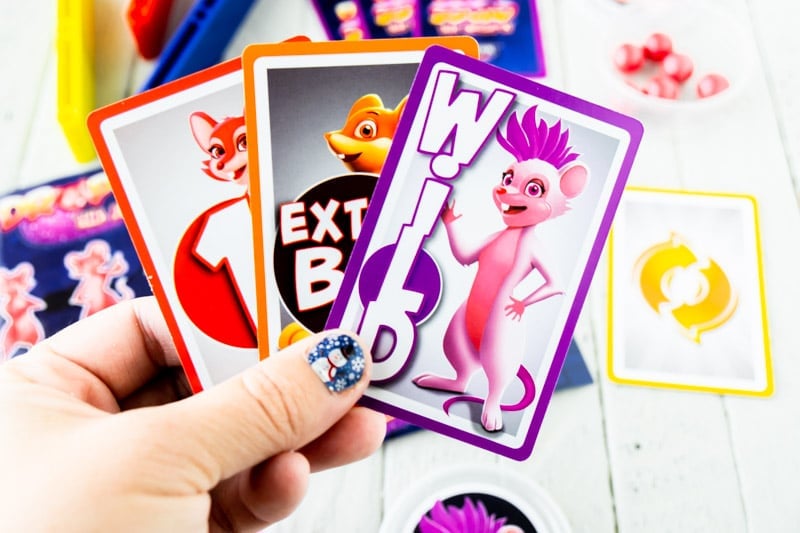 Each round consists of two parts – card playing and marble dropping.

Everyone takes turns playing one of their cards and doing whatever action is on that card for the first half of the round. One card per round.

Your goal with playing cards is to direct the marbles – yours and other people’s – into your goal at the bottom of the board.

This is where the strategy really comes into play with placing ramps, saving your cards for later rounds, and pivoting already placed ramps. 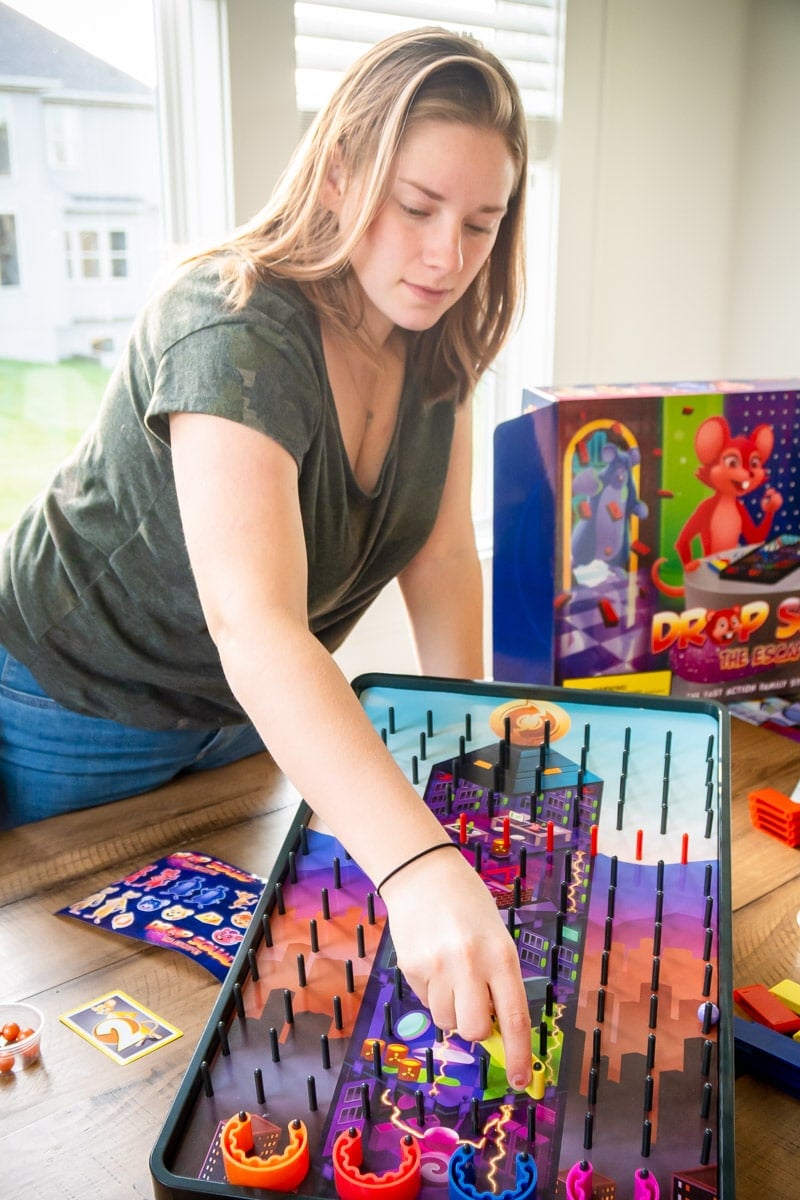 Once everyone has taken a turn and played one card, then it’s drop time.

Going in the same order as playing the cards, players drop one marble from the top of the board trying to get it to land in their goal.

Now it’s time to see if your strategy pays off. You get to choose where at the top of the board to place the marble and just like in Plinko, that drop placement makes all the difference.

If a marble lands in someone’s goal, even if it’s someone else’s goal, they score a point and get to put a scoring peg into their goal. 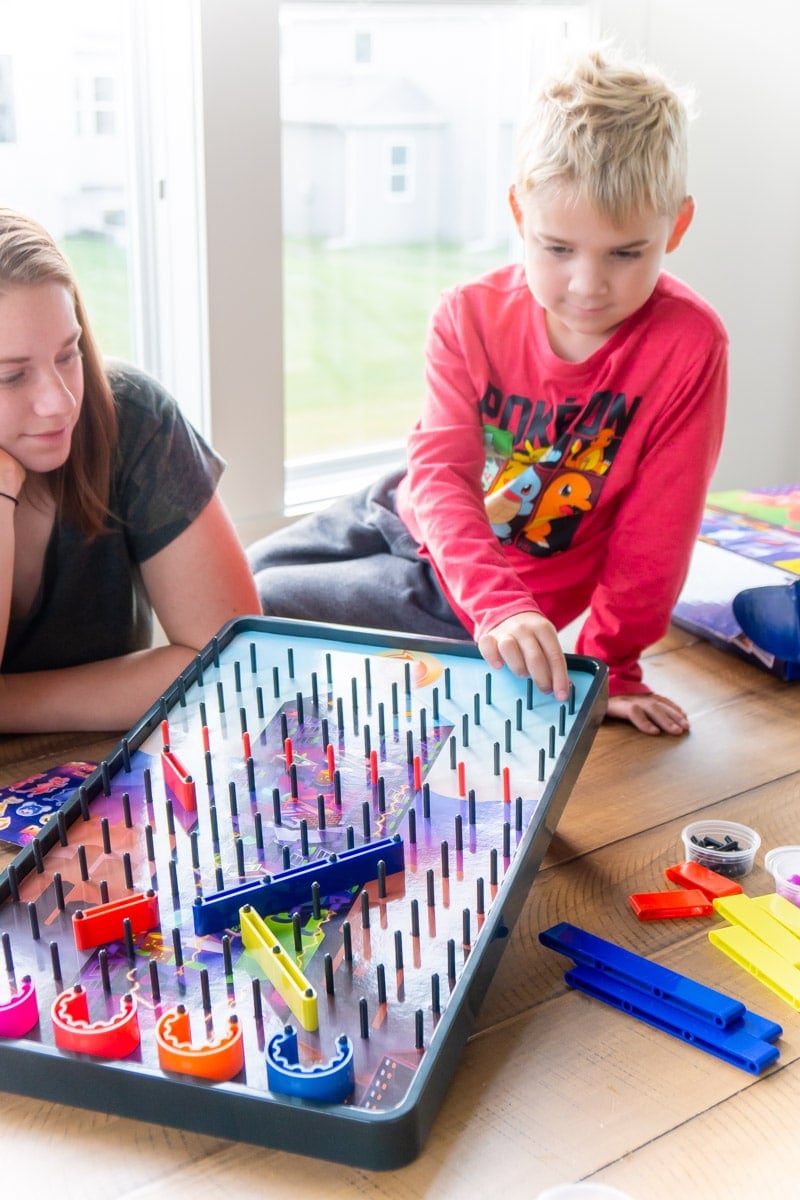 5 – Repeat for the rest of the rounds.

Keep doing the same thing – play a round of cards then drop marbles, for the correct number of rounds.

Once you’re done, see who has the most scoring pegs and that person wins. 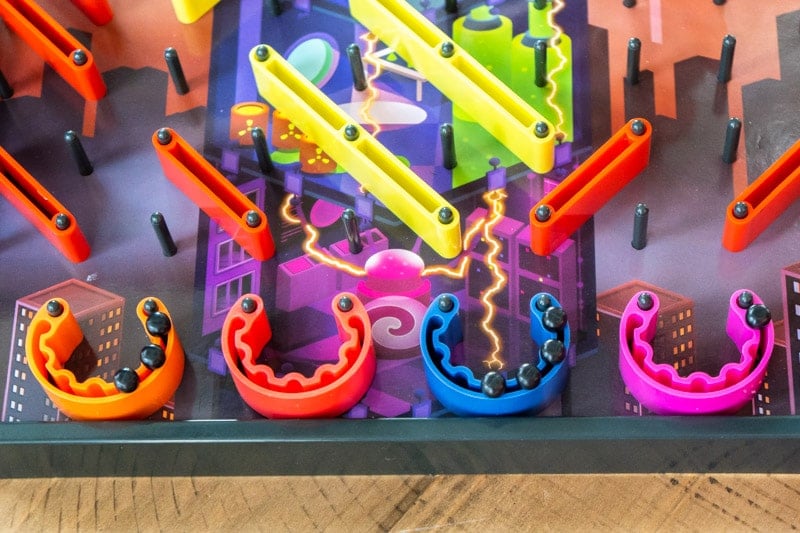 There’s so much I love about Drop Squad, especially as someone who is always trying to find games that I can play with the kids!

Unlike some games where you have to shuffle a million decks of cards or have to do a ton of setup on a game board, Drop Squad really only takes a minute or two to setup. Shuffle the cards, pick characters, and prop the board up with the kickstands.

That’s it. It’s a great option for a family game night when you don’t have that much time and don’t want to waste a lot of time setting up the game.

At one point we had three generations (my son, my husband, and my dad) all playing this game together and everyone had a blast. The only time I had to help my son at all was with pivoting the ramps and then it was just making sure he kept it on one of the same pegs as it started on.

Everything else he could totally do himself. It’s a simple enough game that kids can play but the strategy and luck aspect of it still make it fun for adults.

I’m not sure it’d make my top board games for adults , but for a family game, it’s a total winner!

Or if the kids want to play by themselves, it’s a great option for that as well. And anything that’ll keep the kids entertained is an A+ in my book. 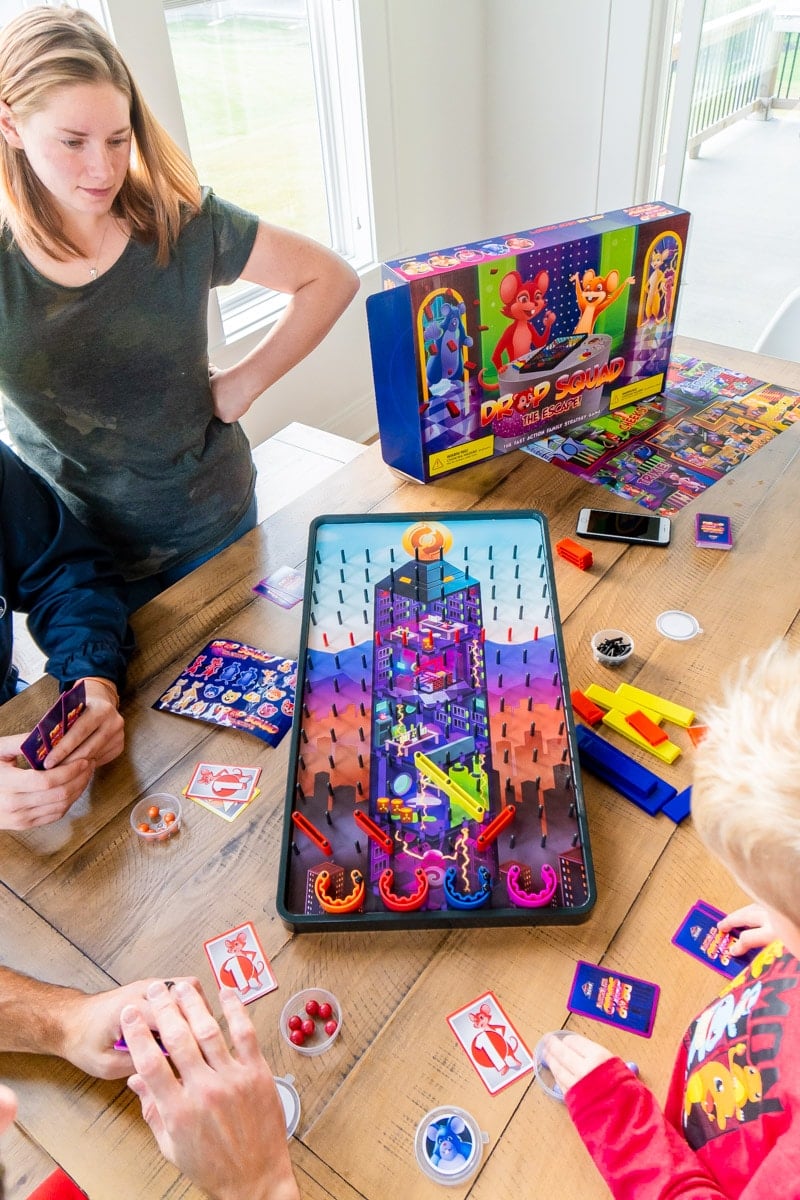 Not only is the setup process really quick but the game itself is quick. There are exactly twelve cards played the entire game and typically between 12-16 marbles being dropped (depending on extra ball cards). And while there is strategy involved, it’s not complicated strategy.

We played a number of times and most games took us 15-20 minutes tops. If you want to make it a little longer, just play two games and add up the points for the winners.

4 – It’s a combination of strategy and luck.

One of the hardest things about playing games with kids is trying to balance the winning and the losing. Meaning playing in a way that you don’t necessarily always beat them but that they don’t always win to teach them sportsmanship.

Drop Squad takes away the need for that balance because as much as you strategize with the placement of your ramps and marble drops, it’s still luck of the drop. You could have the best setup for a marble to drop into your goal and it still doesn’t go in.

My son won two of the four games we played by sheer luck of the marble bouncing into his goal. It’s the perfect combination of strategy and luck to keep everyone happy. 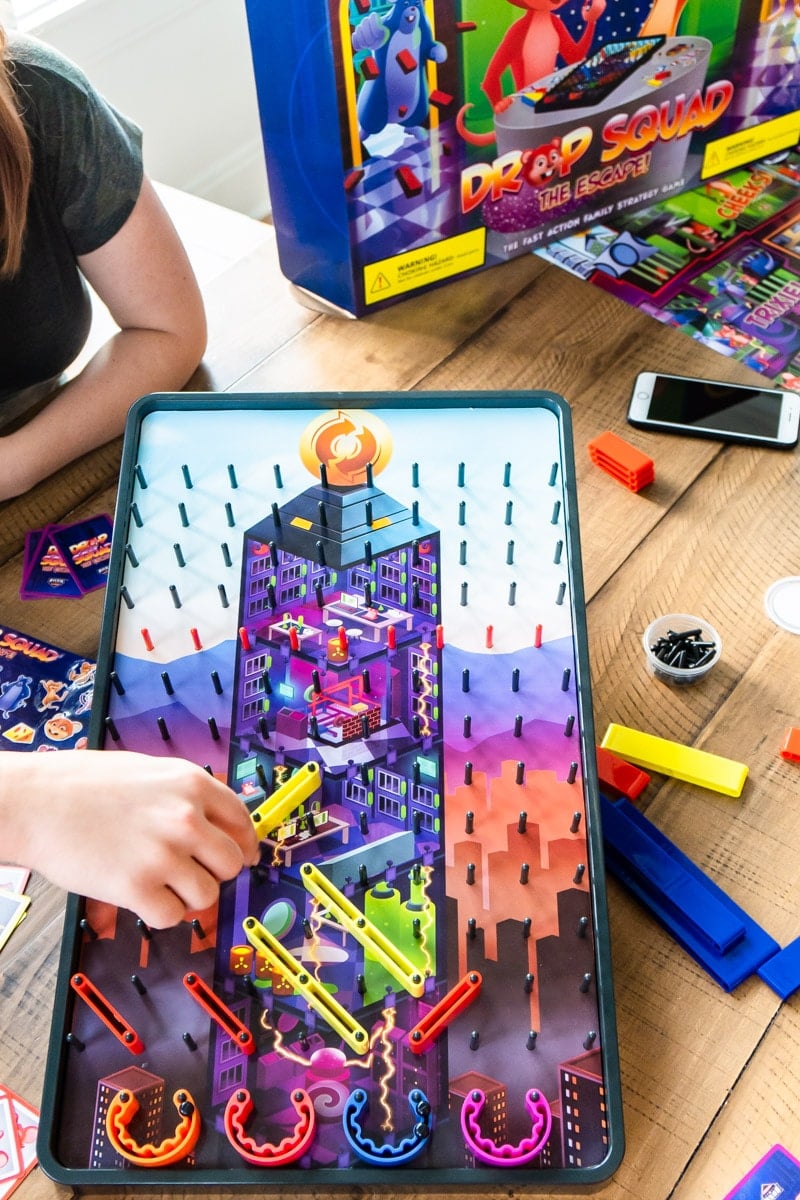 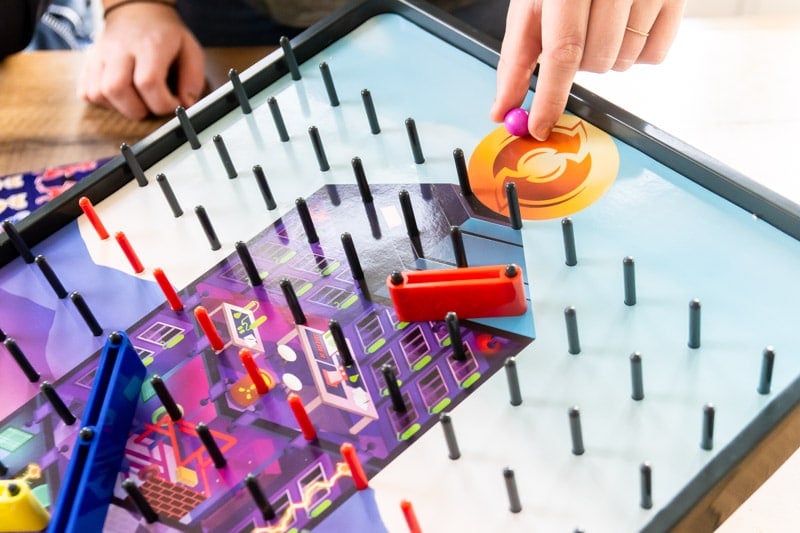 5 – The packaging is fantastic.

I already mentioned this above, but I love that everything has a place. I also love that the entire game is bright and colorful. It really gives it a family-friendly, game night feel. 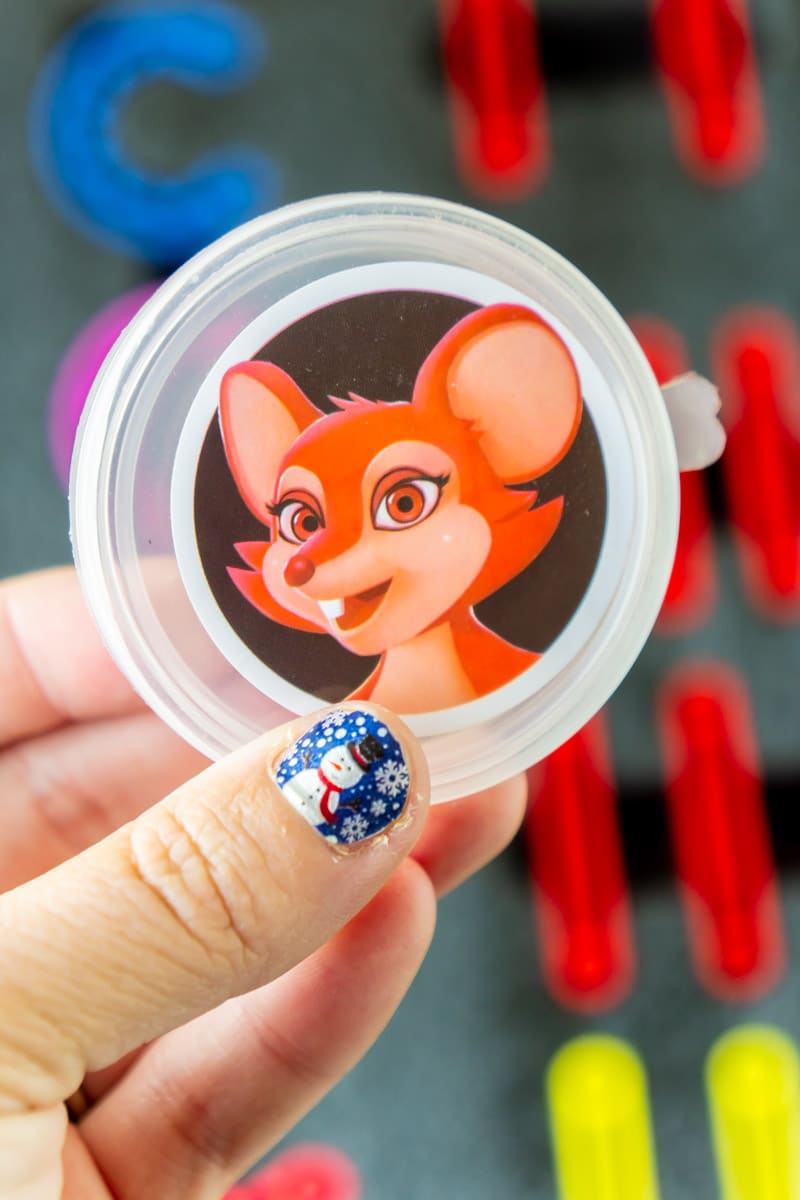 The Not So Good

So really there’s nothing bad about the game – just some things you need to consider before buying! If you’re in a tiny loft in New York City, this may not be the game for you!

I know I mentioned this as being one of the great things about the game. It could also be seen as one of the weak points if you’d prefer a game to be a little longer. You can’t really add rounds to the game or make it longer without just playing a whole new game so if you want something that’s going to take up more time, this may not be your best bet.

But if you’re playing with kids, I’m guessing you’ll be okay with the short version of the game. 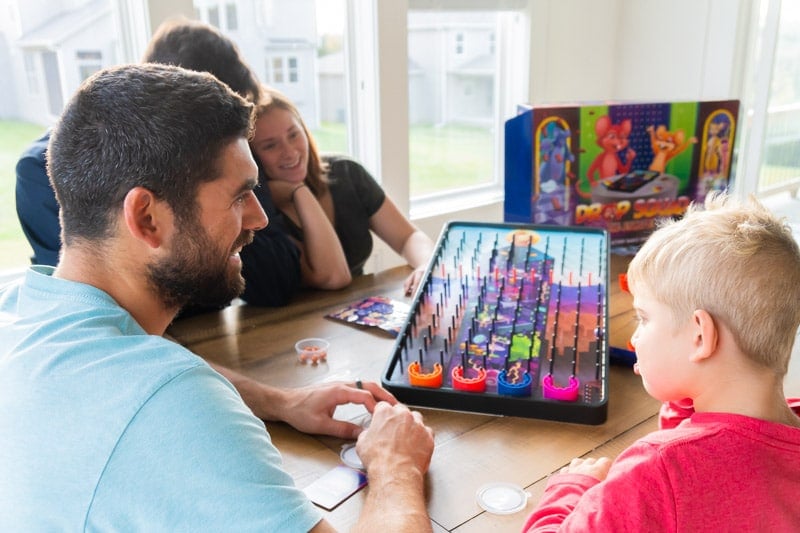 Based on how the board is designed, it’s only feasible to have four people play this game because the goals wouldn’t fit.

I just wish there was an option or a way to play with more than four, especially since they provide five characters. It’s not really a great team game either so if you have a group larger than four, this may not be your best bet.

The game has to be big because it’s a table-top game with a table-top board inside. Unfortunately that does mean the board and the game take up a good amount of space and likely won’t fit into a normal game closet.

It’s kind of like some of these larger outdoor games, just as something to consider. Luckily it’s heavy duty enough that you could totally keep it outside in a garage or in a storage area without any issues. 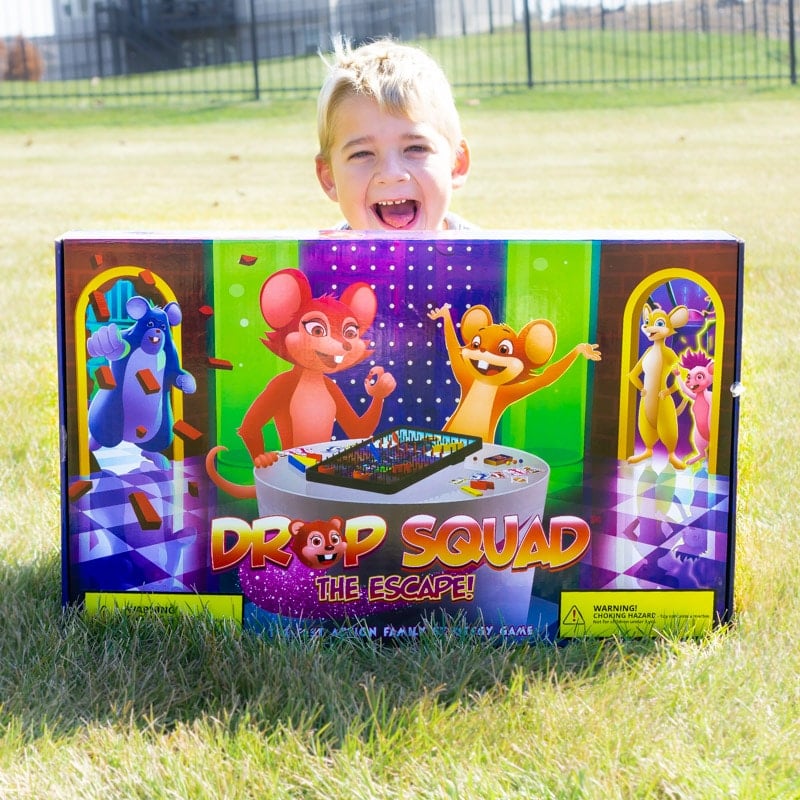 Who Will Love this Drop Squad Game?

There’s a reason that Plinko is one of the most popular games on Price is Right (okay, I made that up but it’s my favorite!). The combination of dropping the marbles and using strategy to guide them into your goals is so fun.

It’d make a great family Christmas gift for a family that likes games! I know my family would love it!

Other Great Games for Families 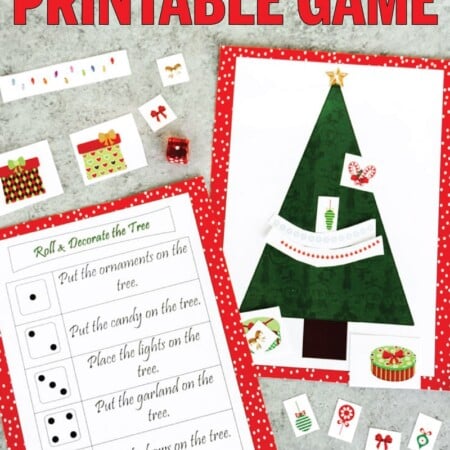 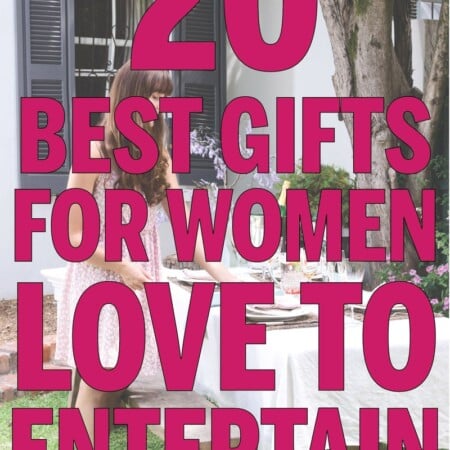