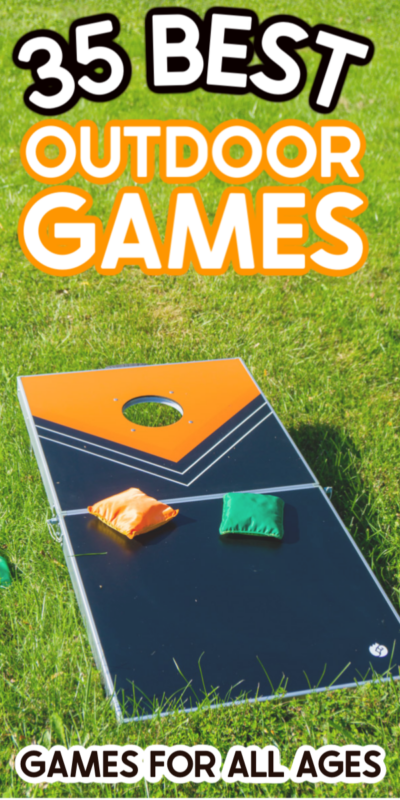 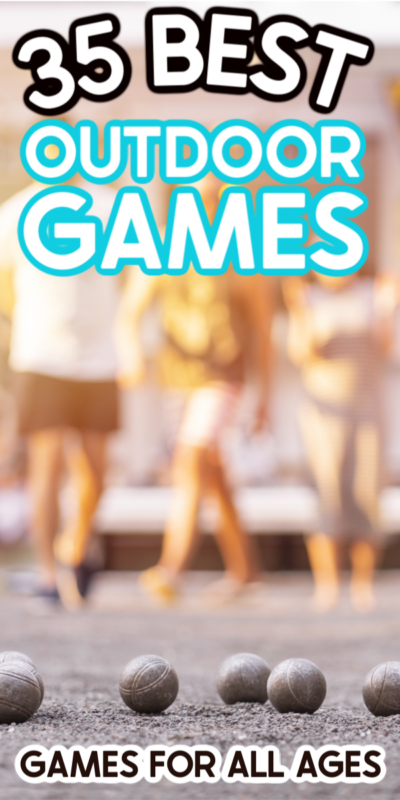 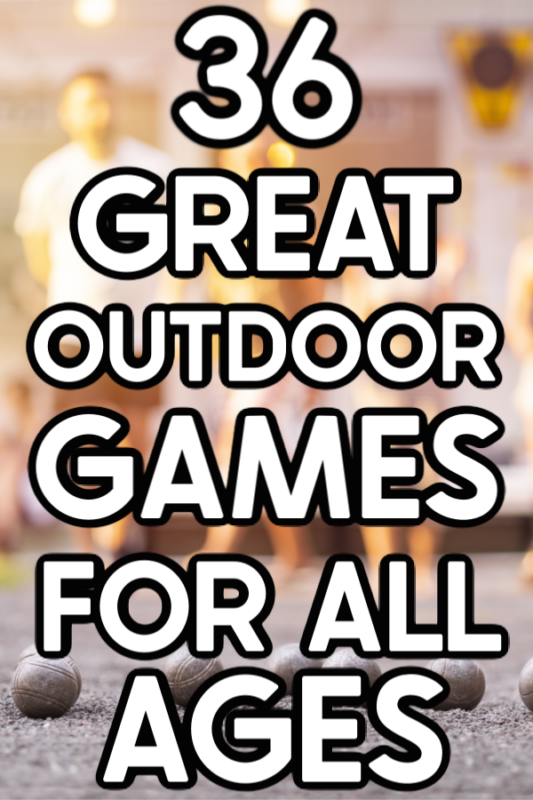 Is there anything better than playing outdoor games with your friends and family on a nice day? Getting all hot and sweaty from some good clean fun followed by refreshing popsicles like these blue lemonade popsicles?

For me, there’s not.

Some of my best memories are playing games outside with my family while we were at home or on vacation. Somehow we always got outside playing sports, games, or really pretty much anything we could come up with.

I’ve put together a collection of my absolute favorite outdoor games for kids, for adults, and for anyone in between. They are a combination of outdoor yard games, outdoor games you’ve probably been playing all your life, and a few of my family’s favorites that you may not have heard of before!

They’d work for a backyard BBQ, an outdoor party, or even some of them as field day activities for kids.

And don’t forget to cool down after playing these games with a dip in the pool and these pool party games!

If you have games to add to this list, leave me a comment with how to play and I’ll make sure to try it out!

These games are ones that make the most sense as party games rather than outdoor games you play on a random day. They either are ones that keep score, win prizes, or are just more fit for a party atmosphere. You could really play any of these minute to win it games as well, just play them outside!

For this game, you’ll need three different balloons (all the same color or not, doesn’t matter) blown up with helium and tied to some sort of balloon weight. Use red white and blue balloons if you’re playing one of these patriotic party games!

Use a permanent marker to write point values on the three balloons. I did 25, 50, and 100 to use round numbers but you could easily do something like 1, 5, and 10 as well. Tape a line one one side of the yard then place the balloons about 10-15 feet away (more if you’re playing with only adults). Put the lowest scoring balloon closest, the next highest scoring balloon next, and so on.

Next to the tape, place a bucket of small footballs like these ones. You want to make sure they’re heavy enough that they can be tossed across the yard.

To play, players have five football tosses to try and hit as many balloons as possible. If they hit a balloon, they score the points. Person who scores the most points wins (or just give anyone who gets a certain number of points a prize).

Whether you make your own DIY ring toss like I did for 4th of July last year or buy one of these already made sets, ring toss is a party game that works for all ages! Simply move your guests a bit further away from the objects they’re trying to ring – further away the older they get!

While you may not want to host a full carnival, carnival games make great outdoor party games! We did some Toy Story inspired Midway Mania carnival games at my son’s birthday party last year, and they were a total hit! Try any of those games with your own theme or any of these Halloween carnival games (just switch out the colors + prizes for a different theme).

Capture the Flag is a one of the most classic games there is. They even played a game in Divergent (and a couple of these other books like Divergent). Most people have probably played it, but it’s often forgotten. Hence being on this list!

To play capture the flag, split your group into two (or more) teams. Give each team a flag or a cloth napkin like we did. Send each team to a different part of a park, forest, or large space. Each team should hide their flag the best they can so that the other team cannot find it. The only caveat is that at least part of the flag has to be visible so no hiding it under a rock completely or something like that.

When you say go, teams must race to try to find the other teams flag and bring it back to their side without getting caught by the other team.

Caught can be hit with a water balloon, tagged with two hands, or spotted with a flashlight (if you’re playing at night). If someone gets caught, they can either be out (not as fun) or put into a prison where they can be rescued by a team member who has to take them safely back to their side of the area without getting tagged to be “uncaught.”

You can find more detailed rules, instructions, and variations on how to play here.

This also makes one of the best swimming pool games as well, but it’s great in a backyard too. All you need is a football and some people to play.

Once they’ve named the score of the toss, they throw the ball behind their head toward the group of people. The group of people have to try to be the one to get the ball – either in the air (alive only) or off the ground (if the points are scored for dead). Whoever catches or ends up with the ball scores those points.

Continue tossing the football and scoring points until someone has 500 points. Whoever scores 500 points first gets to be the next tosser.

Make sure to set some ground rules before you play so that no one gets hurt. Unless you’re playing with teenage boys then by all means, go ahead and let them roughhouse.

For this game, you’ll need to either place a flag, a colored balloon, or even just a colored piece of paper in all four corners of the yard – four different colors. Then pick one person to be the caller; everyone else will be runners.

After the caller says stop, they should give runners about 10 seconds before next calling out one of the four corners represented in the colors. Whoever is standing in the corner that gets called is out of the game. Everyone else is in and should begin moving around again when the caller says go again.

Continue playing with portions of the group getting out every time the caller calls out a color. If you get down to less than four people still moving around the corners, the players have to all go to different colored corners.

The game ends when only one person is left standing in a corner. That person becomes the next caller, and you can play again.

If you’ve never played bocce ball, you’re missing out. This is a huge family favorite, and I can’t take credit for the game in any way shape or form. It’s a sport played all throughout Europe and the world, but it’s one of our favorite outdoor games, so it’s making this list.

Start by buying a set of bocce balls, which includes two colored balls per team and a small white ball. You can get a reasonably priced on one Amazon here or they typically sell them at places like Costco and Target as well during the summer.

If you’ve never done a bean bag toss, the idea is to try to toss more bean bags either into the hole or on the board than your opponent. There are different rules for playing, but we play three points for one in the target and one point if it’s on the board. No points if it bounces onto the board.

Play individually or play in teams! First team to a set number of points wins!

You may have played a bean bag toss or corn hole as some people call it – but have you ever played at night?

This night and day bean bag toss set comes with LED lights in both the bags and the target so you can play during the day and then again at night.

Not a fan of corn hole? You can find tons of other light up game options from Tenalach here as well!

This game is maybe my new favorite outdoor game – it’s a cross between volleyball and four square and an absolute blast!

It takes just a few minutes to setup the net and then you can play for hours! Use volleyball moves and a combination of volleyball and four square type rules for a game that works for four players or a huge group – just rotate in when you get out!

They started with volleyball but now have a water version and even a soccer version now!

Zber is another new one that we recently received and a total blast! It was originally a kick starter that got funded and is one of my family’s favorite games to play!

Zber is kind of like frisbee golf just in the idea that you are throwing frisbees to try and get them to hit something in different locations around an area. But it’s much more than that!

Each game is a little different as you setup six posts (that have the ability to light up at nighttime!) anywhere you want in a space. Then starting at pole 1, you have to try and throw your frisbee to hit and pole and knock the ball off the top. Keep going until you get to pole five then go back to one. Get Zber here.

This DIY version of the Price is Right game is way easier to create than it looks and who doesn’t want to play Plinko!?!

Make your very own ladder toss game with these simple DIY directions. All you need is a ladder and some bean bags.

This fun outdoor game can be made simply and is great for some simple entertainment. If you’ve never played ladder golf, it’s a fun one!

This is one of the most hilarious games I’ve seen! Someone puts candy and other goodies on their shirt and people try to catch them to grab things off! Find out how to do this human pinata game here!

Try it with this massive DIY chalkboard)! Really, you could do so many fun things with that chalkboard, including using it as a scoreboard!

This is a simple DIY backyard version of the carnival game everyone loves!

If you don’t want to make or buy a corn hole, try this easy bean bag toss game instead! All you need are bean bags, Sharpies, and paper plates!

These are the games that seem to be everywhere right now – giant versions of the games we all played inside as kids. And last weekend. My sister had giant Jenga at her bohemian wedding reception but I’ve seen all sorts of large scale games to play in your backyard!

Here are some of the best tutorials to DIY these games and buy them!

My friend wrote an awesome book with step by step instructions on how to make a bunch of these games and others! You can get the book here with 13 fun outdoor games you can make easily at home! 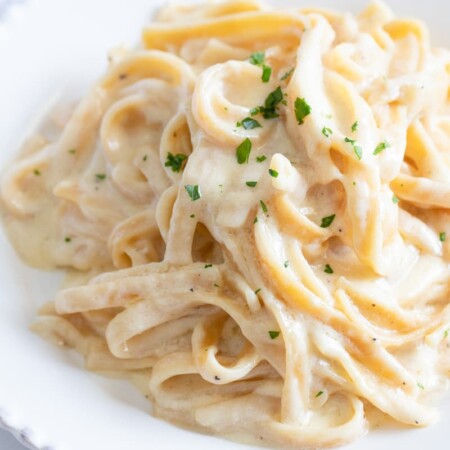 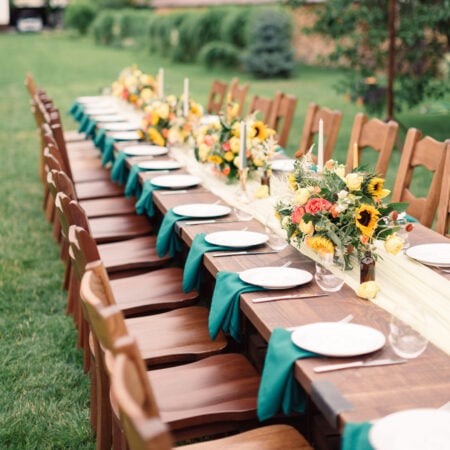 Next Post
How to Create the Perfect Party Menu