This post contains affiliate links. If you purchase something via an affiliate link, I may receive a small commission at no additional cost to you.

If there is one song at Christmas that I can always remember the words to, it’s the 12 Days of Christmas. I can’t the same for the rest of the world based on the answers provided in this Christmas Family Feud game but hey, everyone has their own strengths!

And this year, I decided to take it one step further and create 12 days of Christmas inspired Christmas party games! We typically like to play these minute to win it style but you could always just play them as 12 separate Christmas party games as well with different players – easy either way.

12 Days of Christmas Minute to Win It Games

If you want to play these minute to win it style, you can do it in one of three ways depending on how many guests you have and how much you want each person to participate!

In this style, you pick one person (or one team) to play each game and they have to complete the challenge in under a minute. If they do, they win. If they don’t, they lose.

If you do it this way, I recommend having a prize for each game so if someone wins they get the prize.

In this style, pick two people (or two teams) to play each game. First person or team to finish the challenge, no matter how long they take, wins the game and takes home the prize for that game.

This works best if you have a large group and want everyone to participate.

In this style, break up all of your guests into teams. For each game, pick one person (or two or however many that game calls for) from each team to play each game. First person to finish the challenge wins 5 points for their team, second wins 3 points, and third wins 1 point.

Keep count and whichever team ends with the most points at the end of all of the games wins.

How to Play These Christmas Games

I’ve included instructions on how to setup your game structure above and below are individual supply lists and instructions for all 12 days of Christmas games! They’re all easy, fun, and perfect for all ages!

To get an idea of how the games work, you can watch the Christmas games video below!

A Partridge in a Pear Tree

To play, one player must toss birdies and try and land one in the other person’s bucket. The catch – the bucket must be held on the person’s head and they are not allowed to move to catch the birdie, they’re a tree after all. Teams must communicate with one another to toss the “partridge” into the “tree.”

Give each player three of each of the Dove candies and turtles. To play, players must try to stack the candies, alternating between a turtle and a dove, on top of each other and get them to stand for three seconds without falling.

Once the egg is hit, the egg-tossing playing has to try and catch the hit egg.

The first team to catch three eggs hit by their teammates wins.

First person to get an audible bird sound from the person they called wins.

Place the weighted down gift bags on one side of the room, lining them up far enough apart that there is space for a hula hoop to lay around them.

Have players line up on the other side of the room, opposite a gift bag. Give each player a hula hoop.

When you say go, players have to roll their hula hoop down to the gift bag and try to get it to land around the gift bag without knocking the bag over. If they knock the bag over, they must go down, set it back up, and run back to continue trying.

Place a line of plates (one per person) on one side of the room. Have players line up on the other side of the room, opposite a plate. Give each player one of the plastic goose eggs.

To play, players must put the goose egg between their legs and waddle down to the plate then without using their hands, drop the egg onto the plate. The catch? The egg must stay on the plate, if it rolls off they must run back and try again from the beginning.

If a player drops the egg on their way to the plate, same thing – they must run back and try again. First player to successfully lay their goose egg on the plate wins.

Before you play, place a different colored dot sticker on each of the swans so you can tell whose is whose when you’re playing. Fill the storage container with water.

Give each player one of the swans and the straw. Have everyone place their swan in the water right up against the edge of the container. If you have more than two people, you’ll likely need more than one container.

When you say go, players must use the straw to blow their swan from one side of the container to the other. First one to reach the other side wins.

Give each player a feather duster and a milk bottle. Set a bowl full of Milk Duds in the middle of a table where everyone playing can reach.

When you say go, players put their milk bottle on the ground alongside the table. They can place it wherever they want and continue to move it throughout the game.

To play, they must take one Milk Dud at a time, place it on the table, then use only the feather duster to sweep it off the edge of the table, trying to get it to land in the empty milk bottle. First person to land a Milk Dud in the milk bottle wins.

This game requires at least two players but can have more if you want to make it more like Reverse Charades – Christmas song version.

Choose one person from the team to be the guesser and everyone else will be the dancers. Give the guesser the stack of index cards, face down so they can’t see the songs on the cards.

When you say go, the guesser must place the first card on their forehead (kind of like in these New Year’s Eve games) and the rest of the team must play dance charades – dancing out the song on the card. No words, numbers, or props – just dance charades.

Team to get the most songs in a minute wins.

Have player sit next to the bowl of ping pong balls and when you say go, they must bounce the ping pong ball over the stick/pole and get it to land in the box. First player to get one in wins or if that’s too easy for your group, do three.

Place the pipe cleaners evenly around the table so that there is enough space around them for people to stand, one person per pipe. Give each person a pipe cleaner.

When you say go, players must hold the pipe cleaner at least chin level (they can go higher but not lower) and try to drop it and get it to land in the pipe cleaner. Shorter people will have a slight advantage, but it doesn’t seem to matter that much since it’s still a good distance away.

First player to successfully drop their pipe cleaner into the PVC pipe wins.

Give each player a plastic cup and chopstick. When you say go, players must place the cup face up either on the table or floor (their choice) then use the chopsticks like a drumstick to get the cup to flip over and land upright.

First player to flip their cup over and get it to land upright wins.

I highly recommend watching the video in this post for more details because it’s a bit hard to explain, but it’s so fun!

If these aren’t enough for you, make sure to check out some of these other fun Christmas party games as well! Or any of these gift exchange games are fun too!

Want a printable version of these games with all the supplies and instructions included in one PDF? Enter your first name and email address below, and you’ll be taken to the PDF and emailed a copy. If you can’t see the form, click here to get to it.

The file will include a short version of this post with all twelve games, supply lists, and basic instructions. 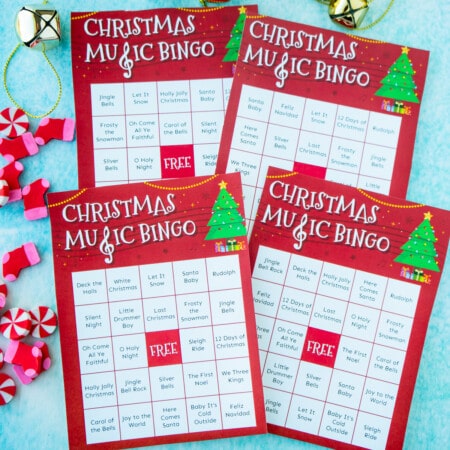 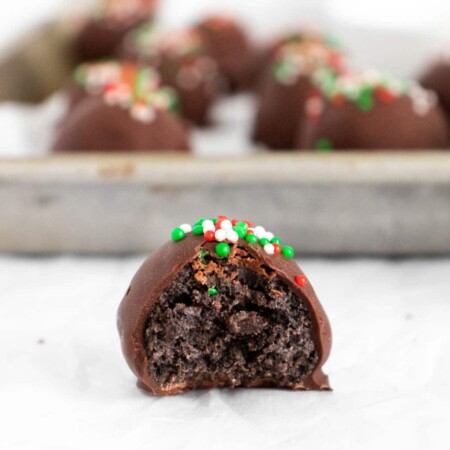