My family is a big fan of games that get you up and moving – even better if it’s something you can do as a team or big group, even when you have younger children around!

I love playing Halloween games at my parties and Halloween charades is always a fan favorite, especially when you mix things up and don’t just stick with traditional charades! You could even get a bit more specific and try Harry Potter charades!

Want to see these games in action? Check out the video in this post to see how fun they can be for the entire family!

For any of the games below, you’re going to need:

How to Play traditional Halloween Charades

This version of charades is your standard, run of the mill, charades game – just with Halloween related words. This fun Halloween game is great if you don’t want to try something new and just want to stick with the basic! Just pick a big area like a living room or recreation room then get started!

You’ve probably played charades before but just in case, I’ll do a quick refresher for younger players or a younger audience who may not be as versed in charades!

When you say go, the player has to pick a word, act it out, and try to get their team to guess it before the timer runs out. No talking, singing, or words – just acting.

Players can do things like “sounds like,” by pointing to their ear, show that it’s a movie by rolling a movie camera film, and tell you the number of words by using fingers on hands.

Keep playing until each team has gone a set number of times. The team who guesses the most words wins.

How to Play Reverse Halloween Charades

Reverse charades is one of my all-time favorite party games for adults, but it’s really great for any age! It’s one of the most fun ideas when you have multiple age groups playing together!

Keep playing until each person on each team has had the chance to be the guesser. The team with the most words guessed correctly wins.

You can always just buy the game too and pull out any cards related to Halloween! Or you could just use my list of Halloween words below and write them on slips of paper if you don’t want to print them out!

Now things are getting a little tougher. Instead of having regular Halloween charade words like witch, pumpkin, and trick or treat – the list of words includes only titles of Halloween movies and songs. That free printable is also included in the downloadable PDF at the bottom of this post!

This game is still played the same way but it’s better for adults who will likely have seen or heard most of these songs and movies.

Feel free to dance (hello Thriller!), snap, clap, and point to things in the room to help make it easier for your team to guess. You’ll also want to get good at telling your team if it’s a movie or a song as soon as you get started.

Not sure people will be able to act our songs but still like the idea of having Halloween musical fun, try this Halloween name that tune game instead! It’s always a good time!

This version may be difficult with younger kids, especially if they can’t read! If that’s the case, I recommend sticking with one of these other Halloween party ideas instead!

How to Play Character Charades

Since Halloween is all about dressing up and acting like different characters, this charades game is just that – charades in character.

When it’s your turn to go, choose not only a charades word (e.g., pumpkin) but also a character (e.g., witch).

When you act out the word, you have to act out the word in a way that allows people to guess the word and your character. So if you really did get pumpkin and witch, you might fly around on a broom to pick a pumpkin from a pumpkin patch.

To win the round, they must guess both your character and your charades word.

I’ve included a page of basic characters in the charades game PDF at the bottom of this post as well.

How to Play Monster Movie Match

If you have a group that really likes movies, try out this movie monster charades game. Players have to act like the star monster from a movie to get teams to guess the movie.

Other Games to Play with Halloween Charades Words

You’ve got all of these great Halloween charades game cards – what else can you do with them? Here are three other games you can play a Halloween version of, using just the charades words you already have!

If you’ve never played Catch Phrase, you’re missing out. It’s my family’s go-to game because it’s a simple game, a quick game, and easy for pretty much everyone. Well unless English is your second language, that makes it a bit tough but still doable.

In Catch Phrase, you get a word and instead of acting it out, you have to describe it in any way you can (without using the word on the card) to get your team to guess it.

Split into two teams and sit in a circle – alternating members of different teams. Use the game timer from the actual Catch Phrase game or download the Phrase Party app and use their timer to make sure the timer is random.

When you start the timer, the first person reads a card and tries to get their team to guess the word on the card. When they do, hand the cards to the next person in the circle and they try. Keep going around the circle until the buzzer goes off. Whichever team has the cards when the buzzer goes off loses that round and the other team gets a point.

You can also just buy the actual game here if you want to use their buzzer (and have the game). Then you’ll always have it around if you ever just want to add a little extra fun to family game night!

Another one of my favorite party games, especially if you have people who like music.

The basic idea if that you will use the Halloween song cards and instead of having to act out the cards, people have to get up and sing the song using only the word Doo. Full instructions on this game here.

Halloween pictionary is a perfect alternative to charades if you want to do something where people can sit down. It’d work great if you need Halloween games for seniors or have multiple generations at your party.

Oh and make sure to decide at the beginning of the game, not half way through! It’s always good to make sure everyone knows the rules of charades (or whatever game you’re playing) before you start!

This is one of my favorite games when I want to play something hilarious but not have to get up and act! It’s perfect for any time of the year – Halloween or not!

Start with the youngest player first because they’ll likely be antsy to go! And then if they get bored during the rest of the game, they still got a chance to go!

Make sure to set a rule for if someone can pass or not and what the rules are for passing. We typically say you can only pass if you really don’t know what something is – not just if you don’t know how to act it out. This typically comes in play more with celebrity names, movie titles, and songs.

Stick with popular pop culture items instead of obscure TV show options or book titles that most people haven’t heard of. You want not only the actors to be able to act out the words but also for the guessers to be able to come up with the answer!

How do you play Halloween charades?

Pick one person to be the actor and everyone else will guess. The actor has one minute (or a set amount of time) to get their team to guess the Halloween word they are given without speaking or singing, just acting the word out. Then someone from the next team goes. Continue play until everyone has had a turn to act!

What are some good ideas for charades for adults?

Instead of doing traditional charades for adults, make it a little more fun and challenging by trying reverse charades, name that tune charades, or even movie title charades! Use the free printables in this post if you need Halloween word ideas!

What are some good charades for kids?

If you’re doing charades for kids, traditional charades is the best option! If you want to try something different, try reverse charades instead!

If you don’t want the cards and just need some word ideas, here’s the full list of Halloween charades words included in the PDF:

The Halloween songs and movie list can be found in the downloadable file. Or you could always just add things from the best Halloween playlist to your cards!

If you like these charades games, you’ll love these other Halloween party games! They’re great for the whole family!

Enter your first name and email address below to download the free PDF file of Halloween charades words (over 100+ words).

Or if you’d prefer to not provide your email, you can get a copy of the charade cards in my shop here.

There are three different types of cards included in the PDF:

Print out the cards, cut them out, and put them into a bowl or bag of some sort. Just make sure it’s something that you can get the cards out easily. If you think you’ll play charades (or any of these other games) again, I recommend laminating before you cut. I use this laminator with these laminating sheets – super easy!

And since I know some of you would rather save paper and ink, I’ve also included a PDF document of the words that’s not as pretty – just cut and print. Same words, just different format. A link to that document will be included in the email – so make sure to check your email! 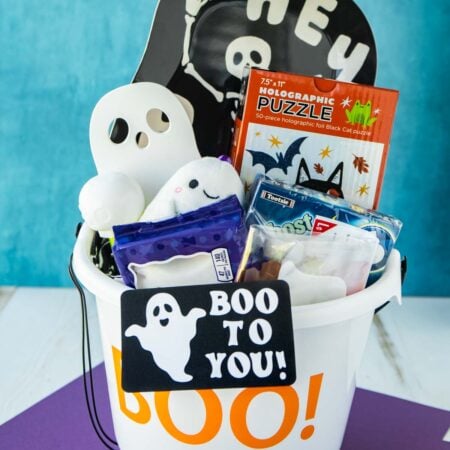