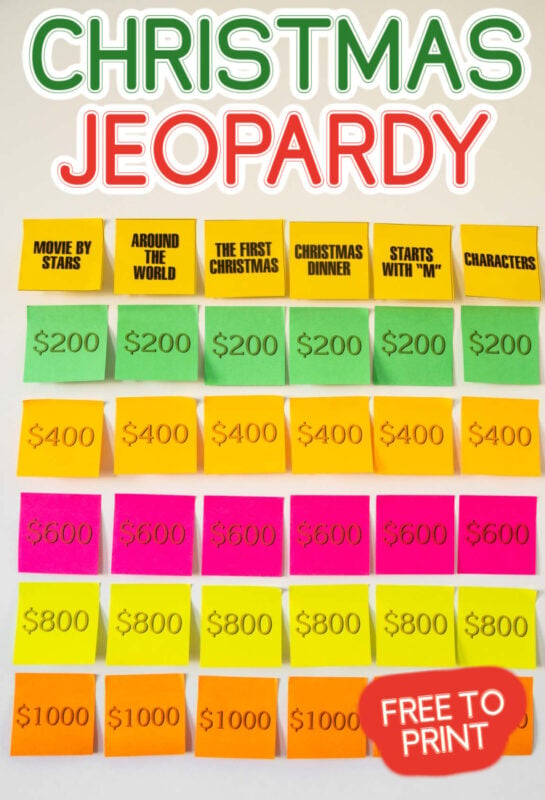 This fun Christmas Jeopardy game is great for playing with at Christmas parties, office parties, and even to celebrate at school! Two sets of Christmas Jeopardy questions and answers plus information on how to setup your own board using post-it notes! It’s a fun new way to get into the holiday spirit this year!

If you haven’t been living under a rock, you’ve probably seen an episode of Jeopardy at some point. I’ve seen hundreds if not thousands.

It’s one of the most watched shows on TV, and I’ve meant to get around to creating my own version of the game before but just never had the chance.

This year is the year!

This Christmas Jeopardy game is played just like the actual game show except no real money is involved. And if you’re not super familiar with how the game is played don’t worry, I’ll break it down for you in this post!

This would be a really fun addition to any sort of Christmas party whether you need office party games, games to play with students in a classroom (I have a version that’s good for teens!), or just something new to do with your family!

It’s one of my new favorite Christmas party games!

You could even pair it with this Christmas Family Feud game, Christmas danger words, and/or some Christmas minute to win it games for the ultimate Christmas game show showdown!

That sounds pretty magical if I do say so myself.

The first thing you need to do is create a Jeopardy board of some sort. In the past when I’ve played, I’ve done things like written numbers on a chalkboard and just crossed them off as questions were asked or drawn numbers on a foam board so that I could take it with me.

This time I thought it would be fun to have everything look actually like the Jeopardy screen and be able to take the questions down when they were answered, so I made a post-it note Jeopardy board.

Did you know you would print on post-it notes? I figured this out about a year ago and have been obsessed with doing it since.

I created a set of printables for you to create your very own post-it note Jeopardy board at home if you want, complete with Jeopardy categories that go with my questions and answer sets.

How to Make A Jeopardy Board

Start by printing out a copy of the blank Jeopardy printouts sheet (the one with the boxes). You can print as many as you want or just one and use that one over and over again (like I did).

Then you’re going to add just standard 3×3 post-it notes to the boxes, sticky side down. You can use whatever color post-it notes you want. I just happened to have a couple of a bunch of colors, so I went with the rainbow look!

Then put that paper back into your printer, making sure to load it correctly so that the post-it notes will be printed on. And make sure your post-it notes are all pressed down firmly so they don’t get caught in the printer.

Print the first sheet of values and they’ll print right on top of the post-it notes. Repeat for the rest of the value sheets and the category cards that go with the game you’re playing.

Hang all of those post-it notes either up on a wall (they won’t hurt the wall), on a foam board, or like a chalkboard or white board.

If you want to do daily doubles on the post-its, you could also add a star or something under the post-it before you put it on the wall, but I didn’t want to write on mine so I can reuse them.

I actually recommend just setting them both up on separate foam boards (or you could do one on one side and the other on the other side) so that when you’re ready for Double Jeopardy, you can just pull up that board!

How to Play Christmas Jeopardy

Depending on who you’re playing this with, there are a couple of different ways you could use these Christmas Jeopardy questions and answers.

The first thing you need to do is figure out your group size and the logistics of how to play with your group.

If you’re playing with a small group or a medium group split into teams, give each team a buzzer. I recommend having teams rotate who is manning the buzzer every question or every few questions so everyone gets a chance. Or just have the buzzer available to the entire team and anyone can buzz in for the team.

I love these buzzers because they make different sounds so it’s easy to hear which one buzzed in first (since we’re not as professional as the actual game show).

Enlist help. If you’re hosting and asking the questions, have one other person who can help you determine the order of the buzzers since you’ll likely be focused on asking the question, kind of like if you’re playing name that tune. They can also keep score!

Start the game by reading the $200 question in the first column on your board (it might be different depending on how you laid out your categories).

The first team to hit their buzzer gets to answer the question. If they answer correctly, they win the money for their team AND they gain control of the board and get to choose the next question.

If they answer incorrectly, they lose the value of the question from their score and the other teams can then buzz in (the buzzing from the original question asking doesn’t count – they have to rebuzz) to try and answer the question.

Teams only get one chance to answer the question and they don’t have to guess (since they’ll lose points if they answer incorrectly). If a team doesn’t buzz in within five seconds, no one gets to answer and you can tell them the answer to the question and the person who was previously in control of the board would choose another question.

Whoever answers the question correctly wins control of the board, which means that they choose the next question. They have to choose both a question category (e.g., Movies) AND a value that they want.

Remove that-post it note from the board once it’s asked so that people know which questions have not yet been answered. That’s why I love the post-it note Jeopardy board, it allows people to see quickly what’s left.

Read the question that corresponds with the value and category they chose (e.g., Movies for $800) and start the process again – whoever buzzes in first and answers correctly wins those points.

Keep going until you’ve gotten through all of the questions in the initial Jeopardy round then setup the board and play Double Jeopardy.

If you’d like to use Daily Doubles, there are daily doubles indicated in the questions and answers for each game set.

If someone choose a question that is a Daily Double only they will be participating in the question (this doesn’t work great for large groups but is good for small and medium ones!).

Jeopardy is typically played in three rounds – Jeopardy, Double Jeopardy (question values are doubled), and Final Jeopardy. You can choose to play one, two, or all of these rounds depending on the amount of time you have, your players, and your situation.

The last part of a game of Jeopardy is called Final Jeopardy and it’s one single question. While I have included this in my game sets, it’s totally optional if you actually want to do it or not!

I don’t recommend doing this for a large group of people just for the sake of time and having to go through individual answers.

For final Jeopardy, you are going to read players the category only. Once you read them the category, they should write down how much they want to wager based on the category. They can wager up to the amount they have in their bank!

Once they’re written down their wagers, read them the question and give them one minute to write down their answer to the question. Play the Jeopardy theme song music here if you want to spice things up!

How to Win Jeopardy

If you’re making this for a Cinco De Mayo party, I always think it’s fun to put a little dessert on the board as well since it’s a fiesta! I added little churro twists and Mexican sprinkle cookies to mine but you could do anything with churros, Mexican wedding cookies, dark chocolate, simple margarita cupcakes, or really anything! Or skip adding them to the board and just serve this sopapilla cheesecake alongside the board instead!

Don’t forget to give the winning player or team a prize – everyone loves prizes!

Can Jeopardy end in a tie?

Jeopardy can’t end in a tie. If there’s a tie, use one of the questions from the other Jeopardy game set (I recommend a $1000 or $2000 one) and whoever buzzes in first out of the people tied wins.

How to Play Jeopardy on Zoom?

To play Jeopardy on Zoom, you’d play in the exact same way as mentioned above, just show people the question board via the Zoom screen. And of course, I recommend making sure no one is using Google or cheating in any way to get answers but typically they don’t when it’s a race to answer the question first!

Can you play Jeopardy without buzzers?

I highly recommend the buzzers just to make it as easy as possible for you to see who buzzed in first but some other options would be to have an item that people have to grab (like I do in these party games for adults), have people raise their hand (this is tough to see the fastest), or have people yell their name when they want to buzz in.

One set is a little easier (though the questions can get challenging as you get to higher value questions) while the other is designed to be a bit more challenging. I think they’d both be good for teens or adults, probably not great for kids.

If you like this Christmas Jeopardy game, make sure to check out these other fun Christmas games!

If you’d prefer to not provide your email, you can purchase a copy in my shop here!

As a reminder, the PDF will include: 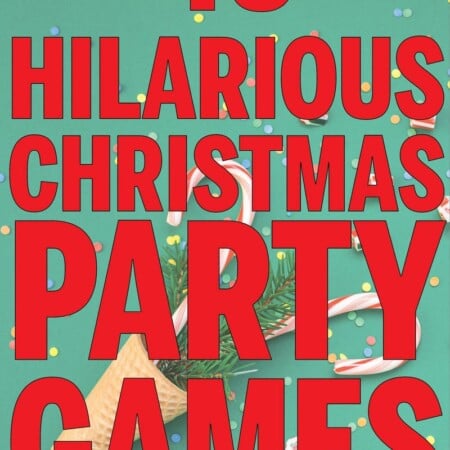 Previous Post
49 of the Most Entertaining Christmas Party Games 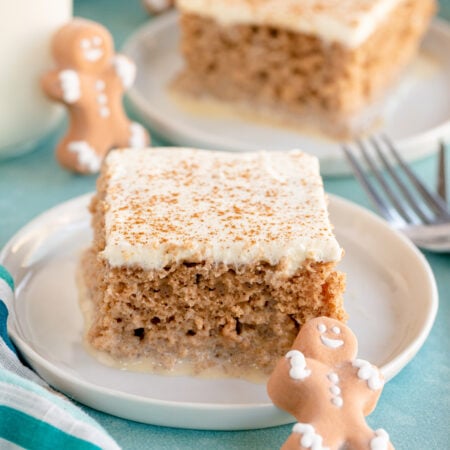