These twice baked potatoes are full of creamy cheese, butter, and more cheese! They’re the best boursin cheese potatoes you’ll ever try and the perfect side dish! 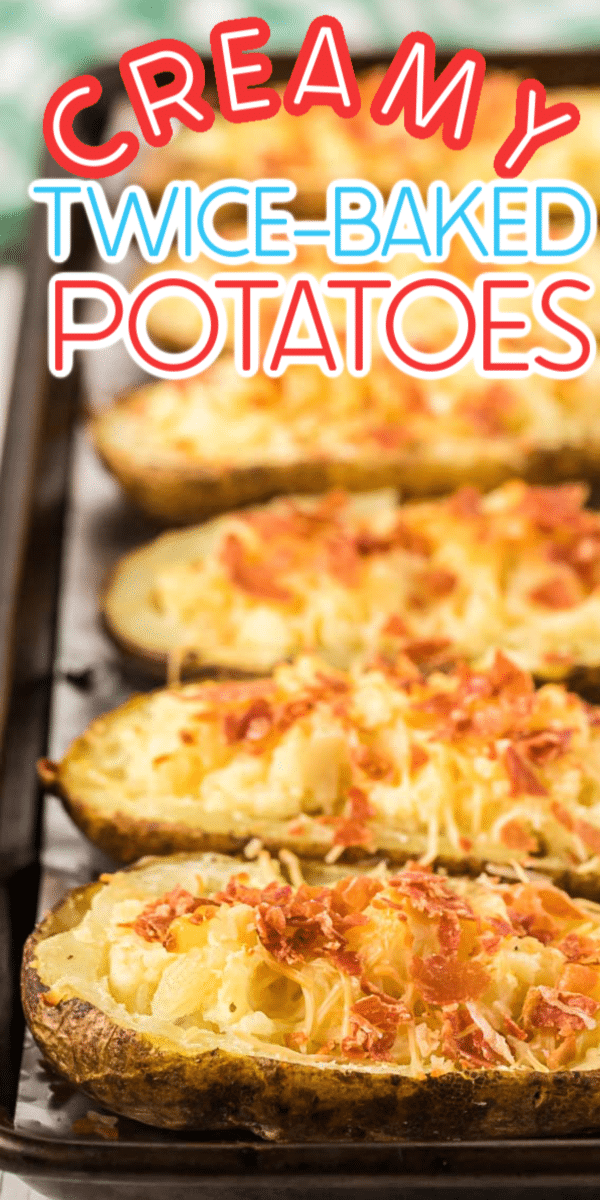 When I was growing up my mom always made boxed scalloped potatoes to go with ham for our Easter dinner. That was when there were just six of us eating.

As my immediate family and “adopted” family have grown larger and larger, a box or two of scalloped potatoes just isn’t enough and my mom started making this huge twice baked potato casserole for Easter to have enough to go around. The stuff is delicious!

Even better when enjoyed with the best strawberry spinach salad and this strawberry cream shooters!

I love traditional twice baked potatoes with their butter, bacon, and cheesy goodness. But they’re nothing special, just like eating a baked potato with all of the standard fixings on top.

For Easter this year, I decided to take my mom’s traditional twice baked potato idea up a notch and make my own version, using boursin cheese and prosciutto to replace the standard cheddar cheese and bacon. 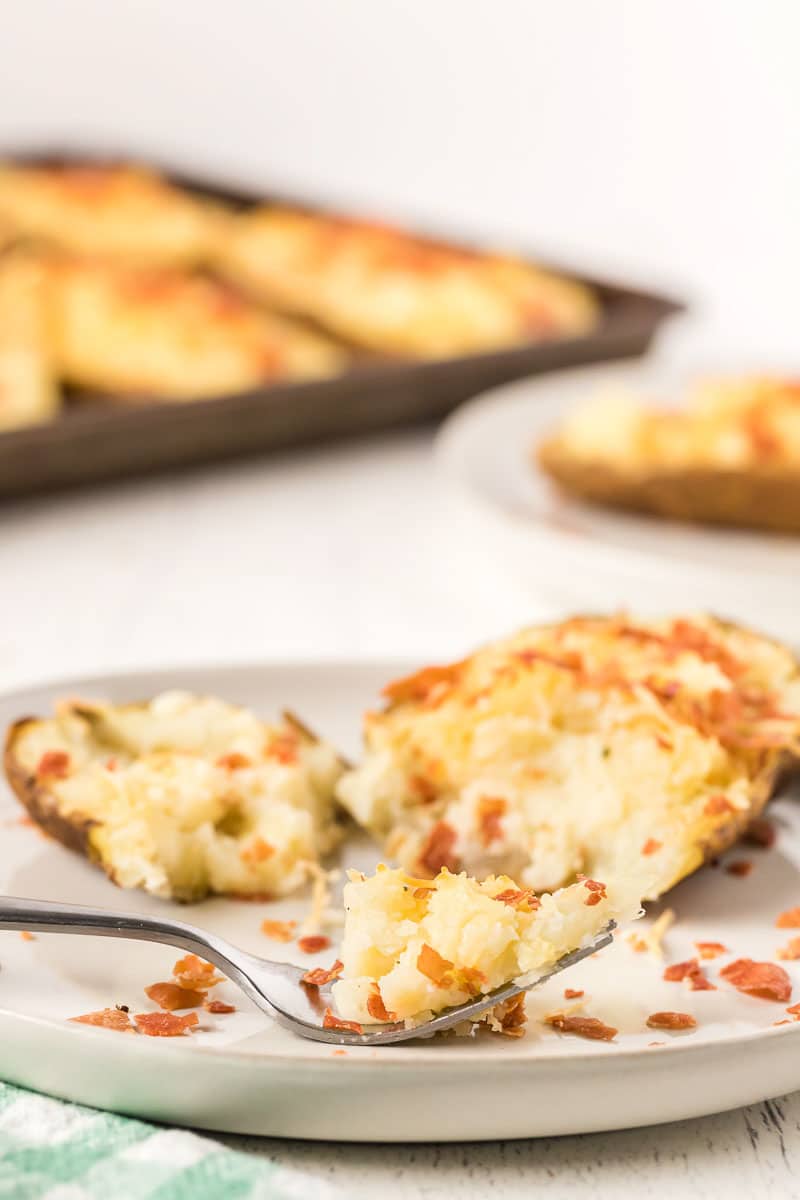 And these gourmet twice-baked potatoes are probably the best I’ve ever had.

Using the gourmet boursin cheese really just makes them the perfect brunch appetizer or Easter side for foodies or really anyone who likes delicious food. 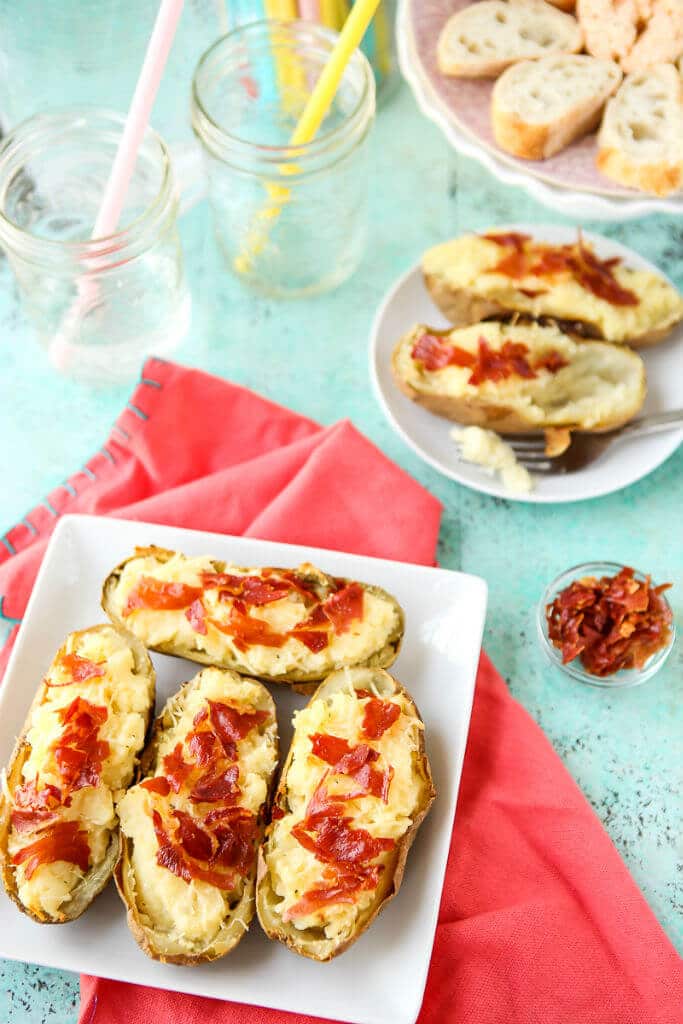 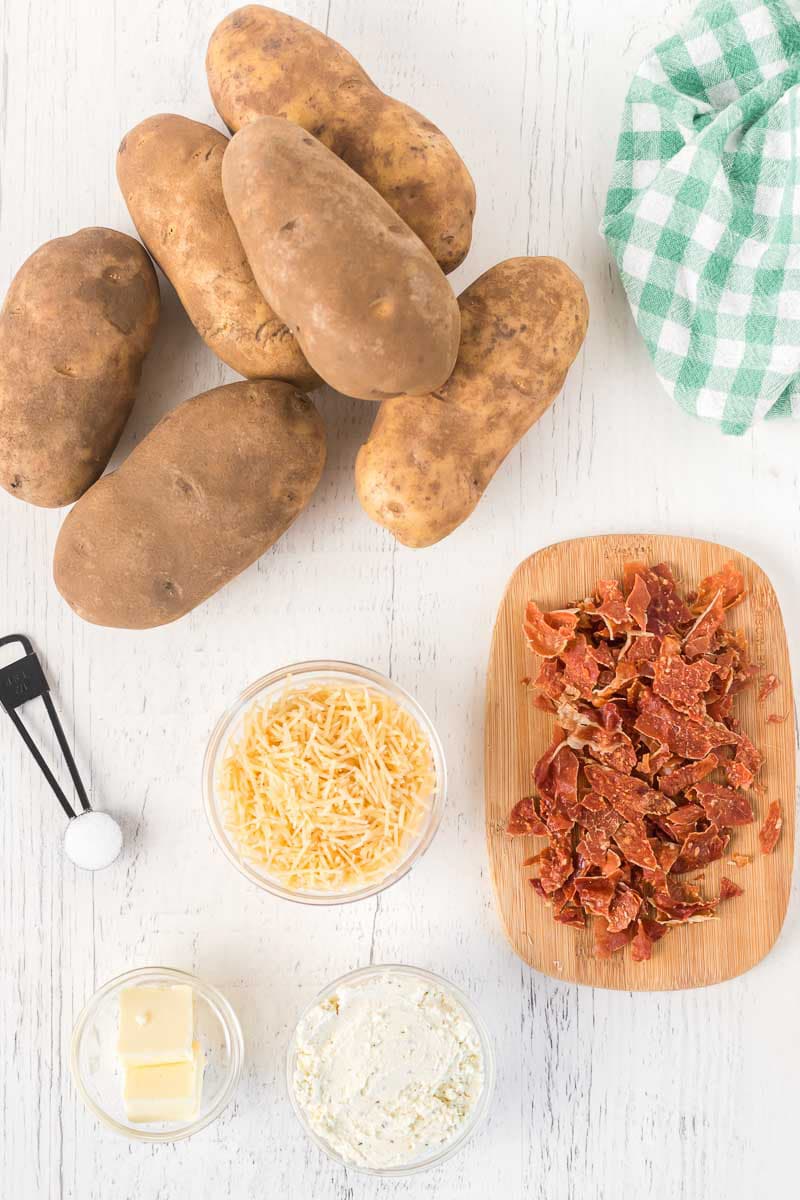 How to Make Twice Baked Potatoes

Making these twice baked potatoes is a lot easier than you’d think at first glance at the twice baked name. These boursin cheese potatoes really only take a few steps to make – they’re just a bit time-consuming because you baked them twice!

The only difference is that you shouldn’t salt the outside of the potatoes in this case. 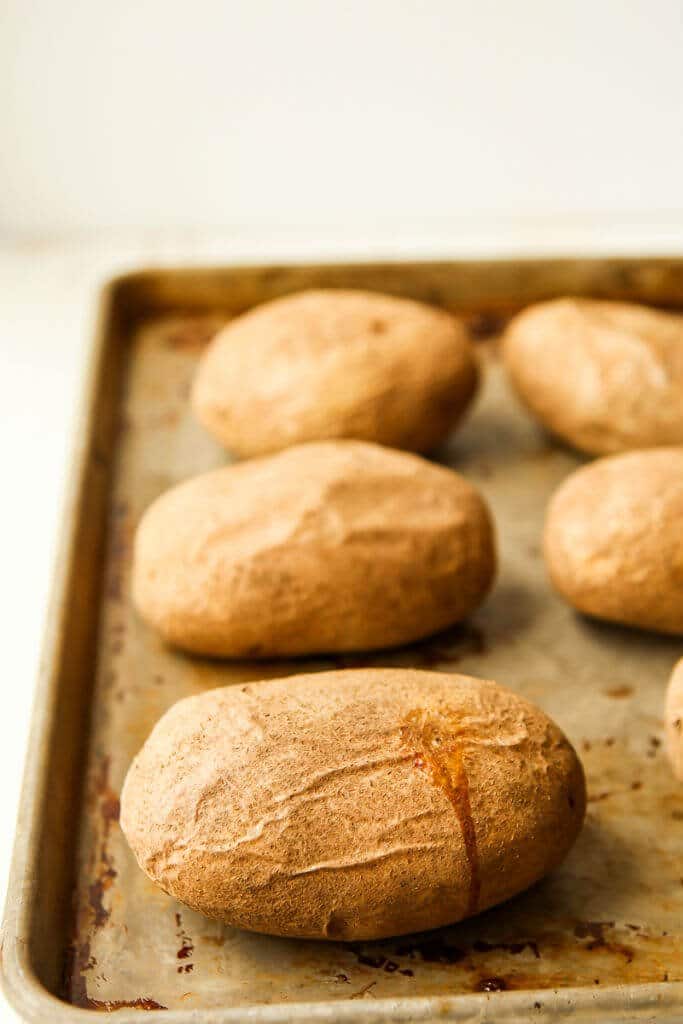 As soon as the potatoes are fully baked,  let them cool for just a minute then slice down the center with a serrated knife, trying not to rip off the outer shell of the potato.

You want them to be cool enough to touch but not too cool that the inside potato isn’t easy to scoop. So let them cool for a minute or two but not 30 minutes.

As you’re scooping, you want to leave a tiny bit still in the potato skin to keep the shape, kind of like a little boat, but try to get out as much as you can. 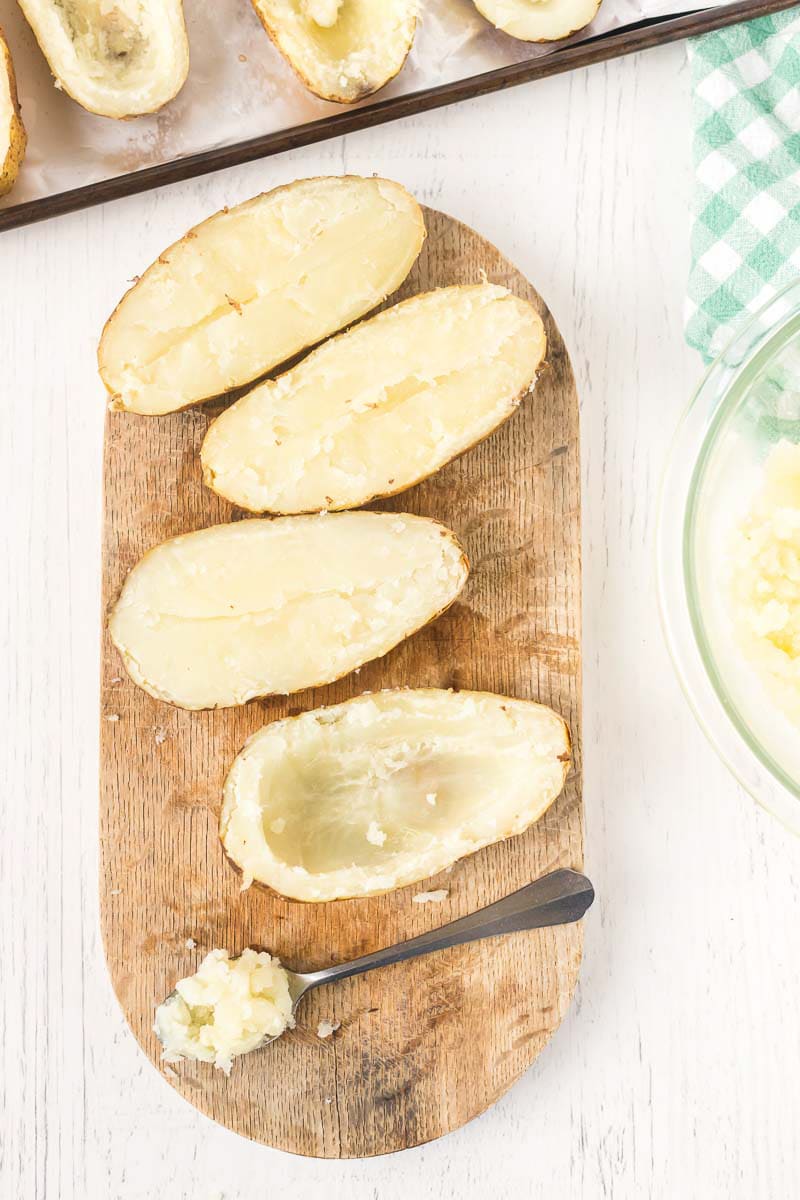 Mix the potato inside with a little butter, just so it melts, not so it purees the potatoes. You can mix everything by hand or use a potato masher, but I’m lazy and after carrying my baby all day my arms are tired, so I use a hand-mixer.

Just don’t mix too much or you’ll end up with creamy mashed potatoes instead of lumpy twice-baked potato filling.

Once the butter is mixed in, add the entire package of boursin into the bowl. Add the majority of your Parmesan cheese and a little salt into the bowl and you guessed it, mix again. And your filling is ready. 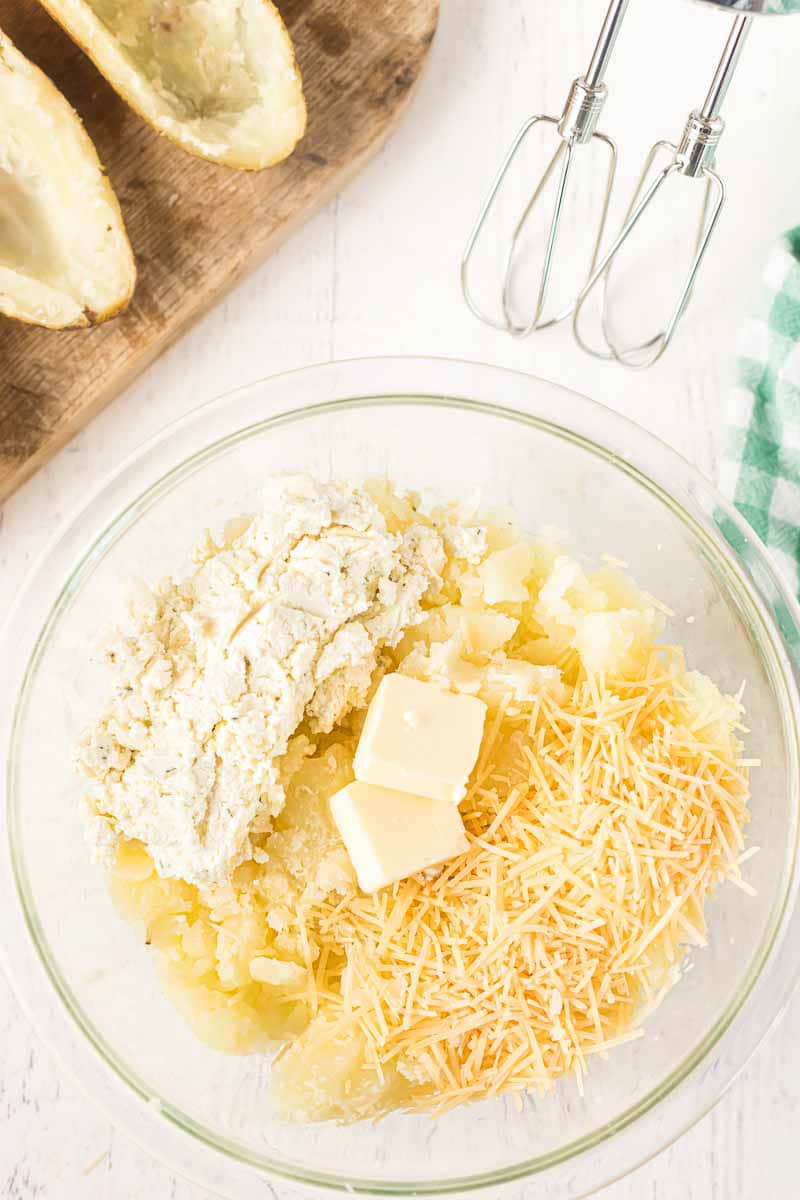 Scoop that potato mixture you just mixed and put it into the potato skins you saved from behindhand. Once they’re all filled, bake again. 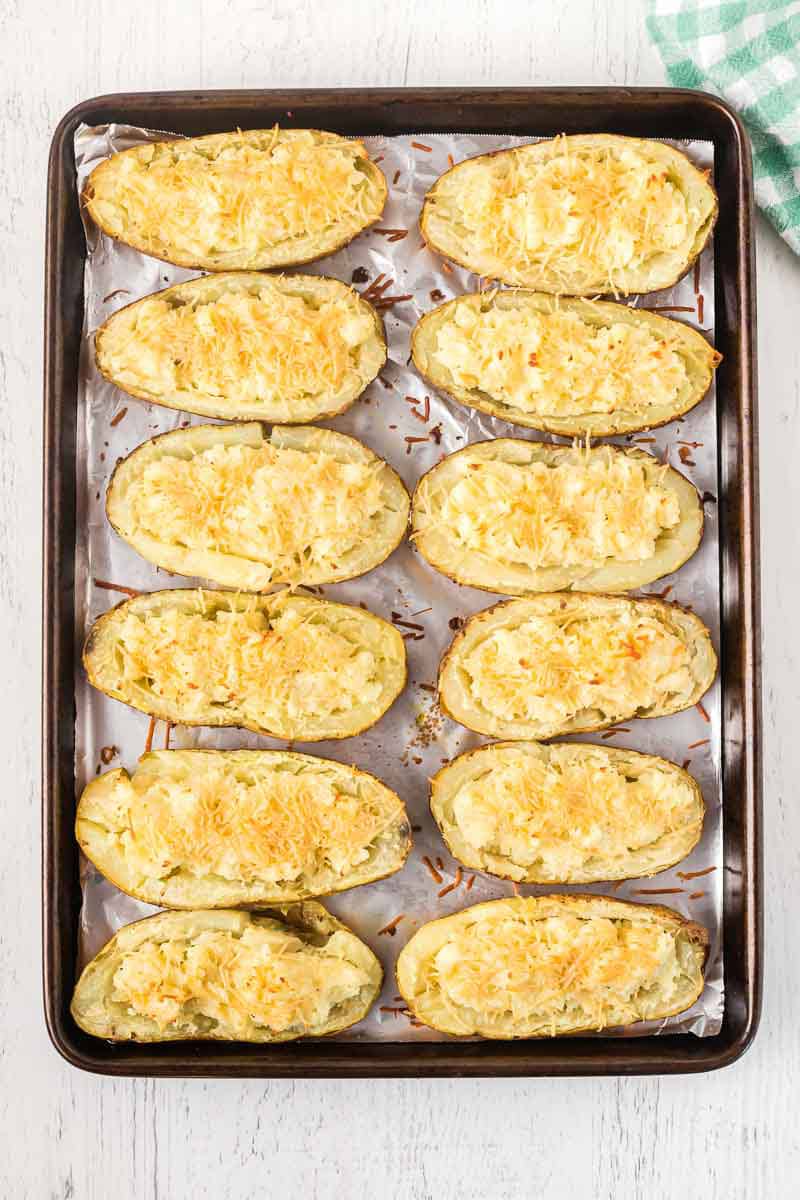 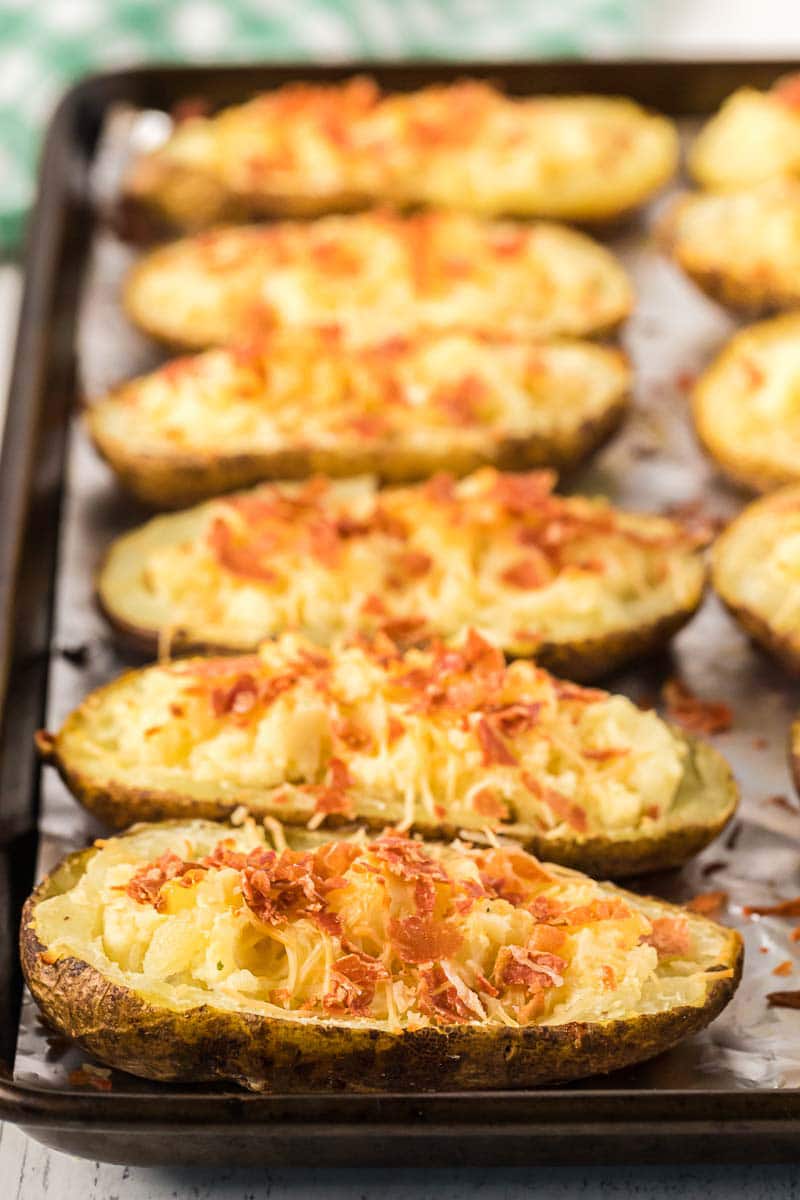 You’ll know the potatoes are twice baked and ready to come out of the oven when they’re just slightly beginning to brown on the top and getting that nice crunch. That crunchy top is the best.

Serve the potatoes hot topped with a little crispy prosciutto and alongside your favorite Easter desserts (this pineapple monkey bread is divine).

Store any leftovers in an airtight container in the fridge for up to five days. 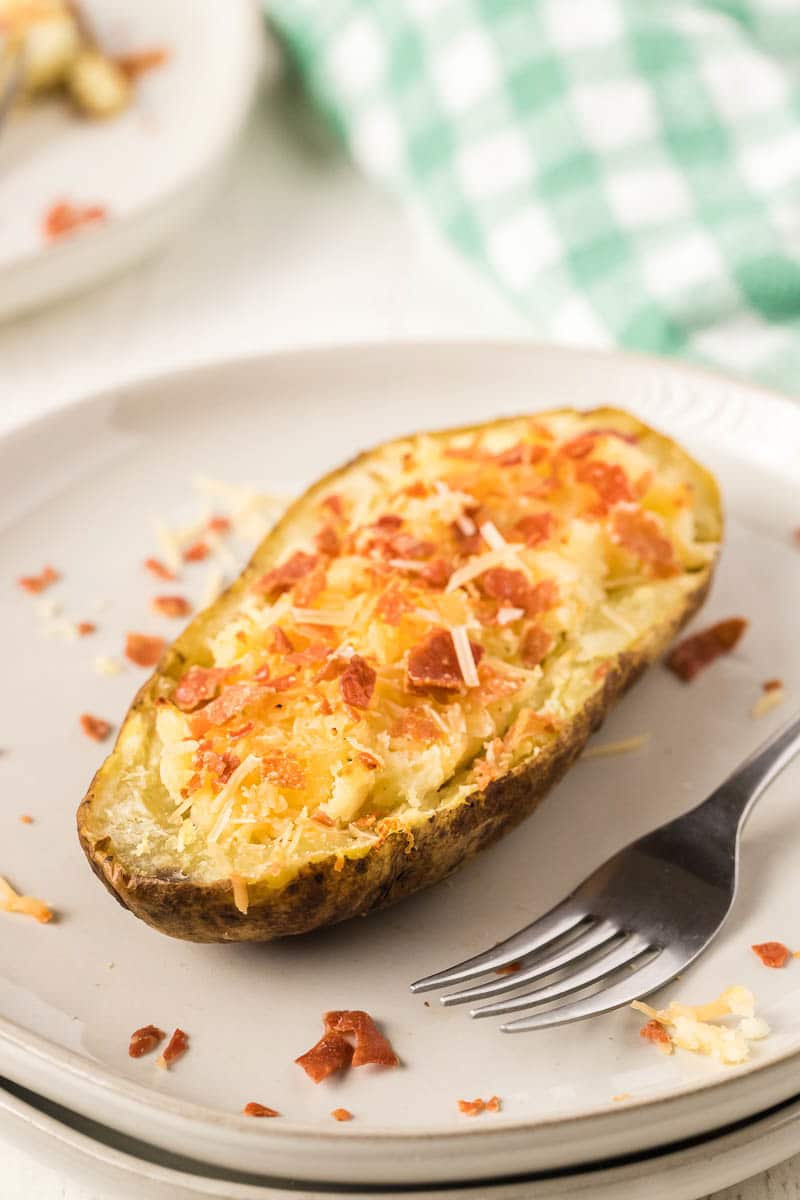 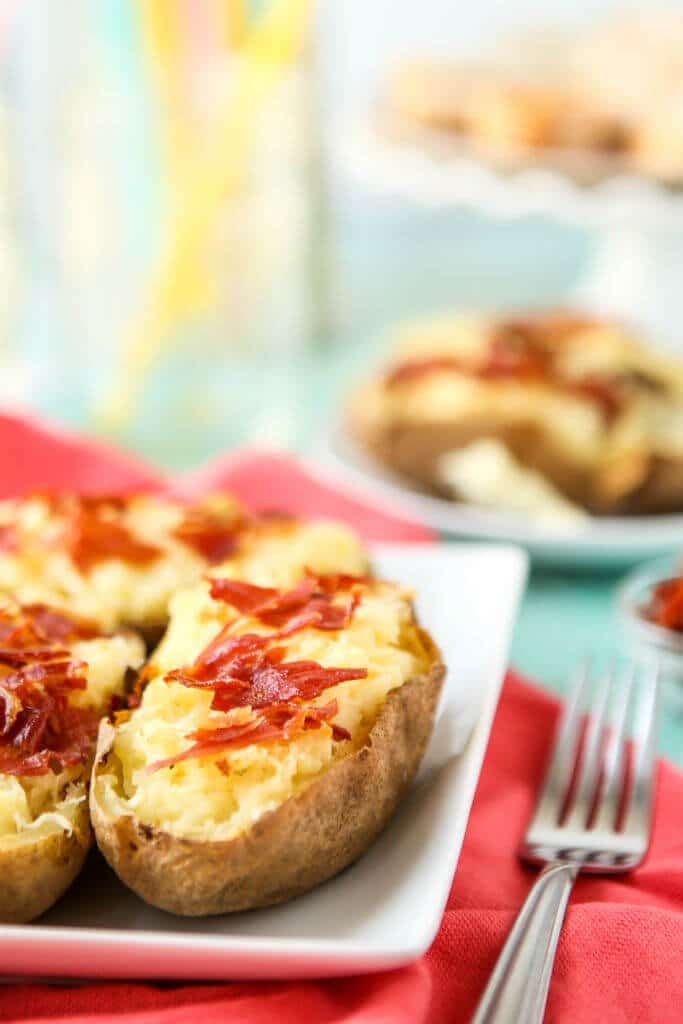 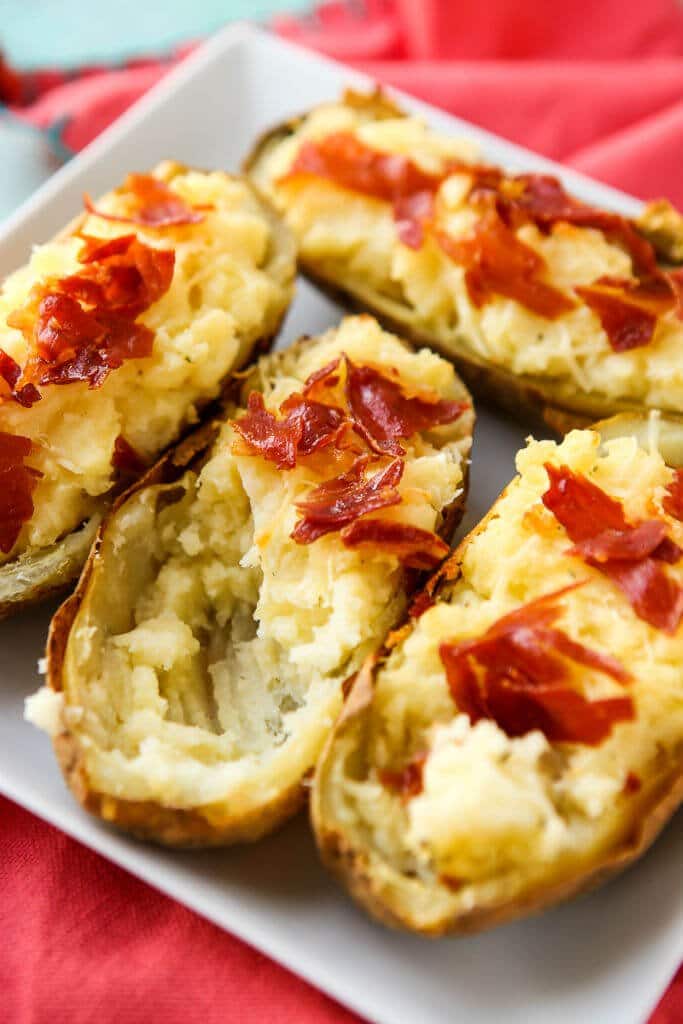 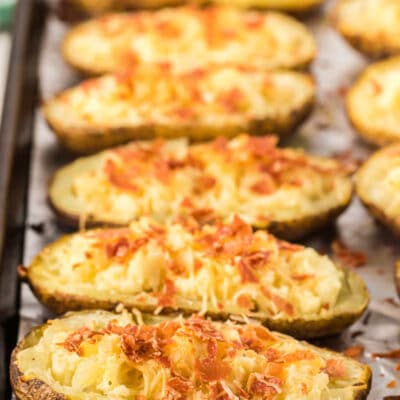 To crisp the prosciutto, line baking sheet with parchment paper and lay prosciutto flat. Bake in the oven at 400 degrees for 10-15 minutes or until crisp. 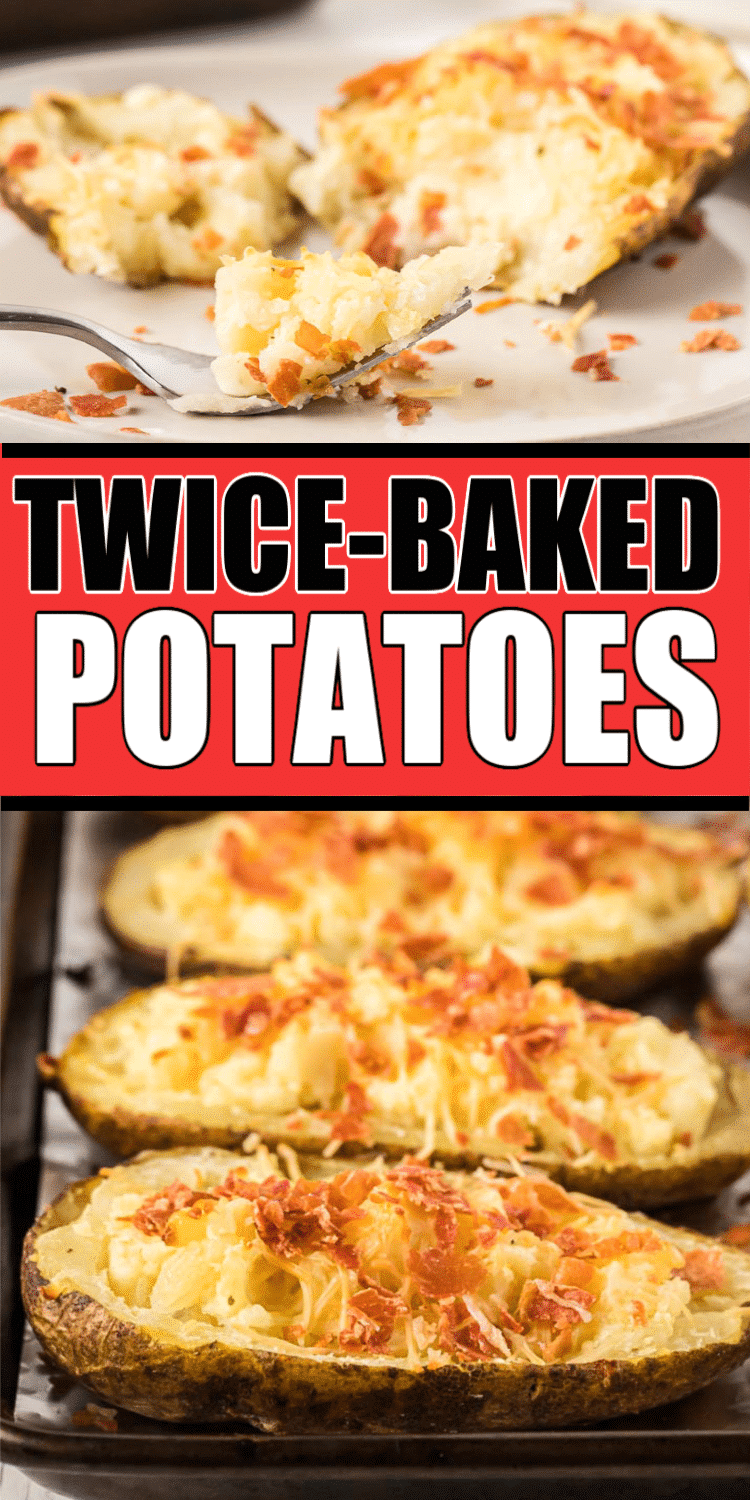