Last week I threw my family a fun game day party before we watched the college football playoffs together. These football party ideas and snacks made with Goldfish crackers would be perfect for any tailgating, game day, or football viewing party! 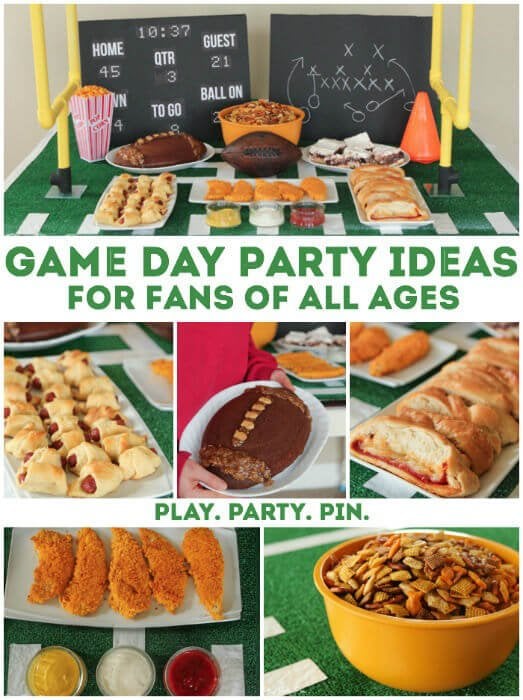 With my family living so far away, they only get to see my parties from afar, not actually come to them. So last week while I was there visiting, I thought it would be fun to throw a game day party for everyone before we watched the college football playoffs! The original intent was to do everything myself and throw the party for them, but it ended up being a huge family affair, and I couldn’t have asked for a better team. Or a more fun afternoon for that matter. I love having a family that loves football, food, and playing games! 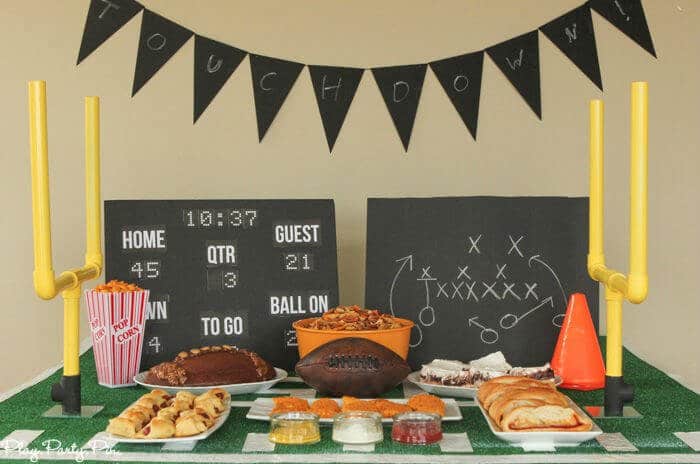 One of the perks of having a husband who absolutely loves football is picking his brain for fun football inspired ideas. As soon as I told him that I was going to throw a football party, he immediately said, we should get some turf and turn the table into a football field! So I went to our local home improvement store and picked up some green outdoor carpet (way cheaper than actual turf) and let him, okay fine I asked him very nicely, make the football field with white tape. Such a simple and inexpensive way to make a huge impact on your party table!

In addition to the actual field, my sister helped me out and made a scoreboard and play board from black foam board, printed numbers, and white chalk. I finished off the decorations with DIY PVC pipe field goals, a touchdown banner behind the table, and some football related odds and ends like the cones, an old football, and a popcorn container. 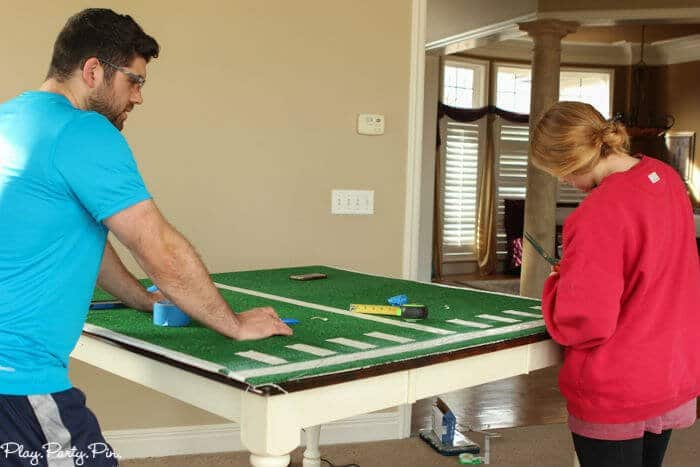 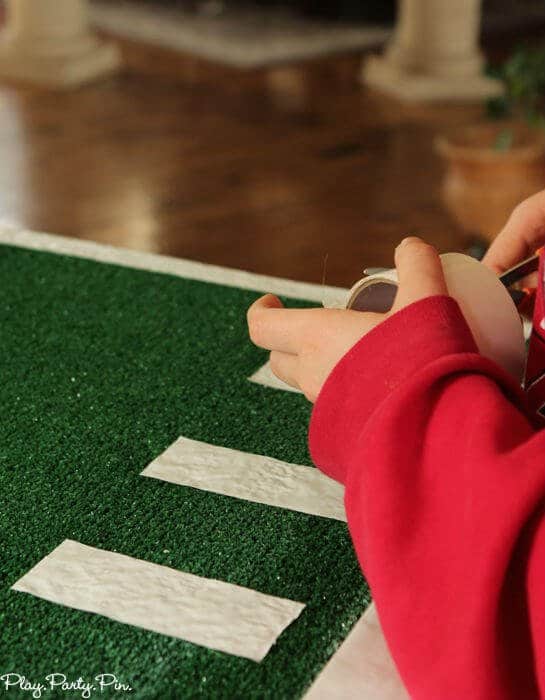 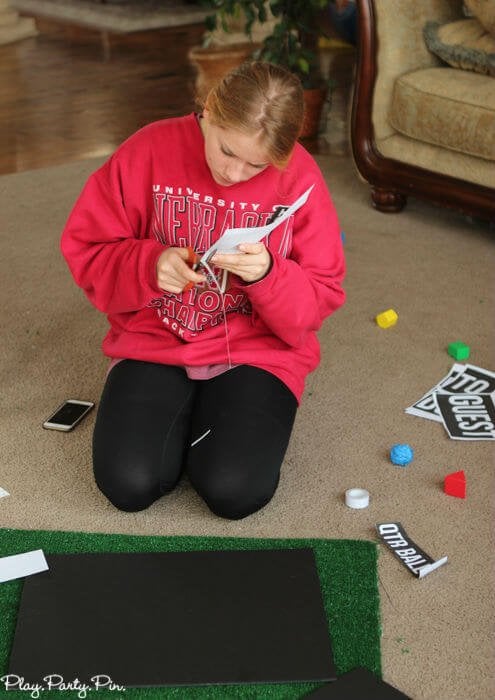 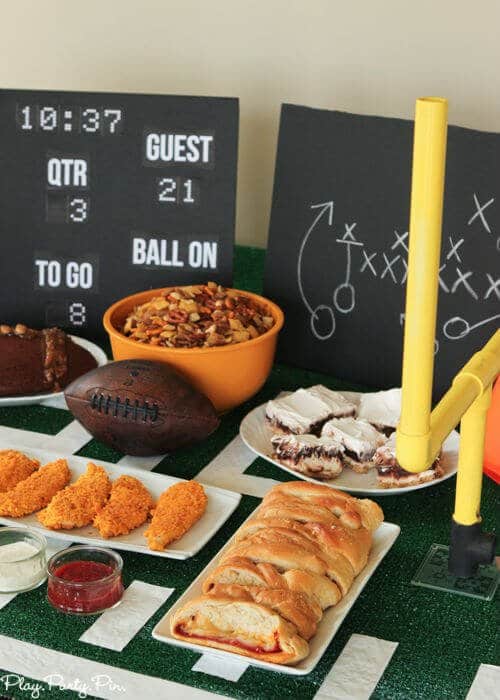 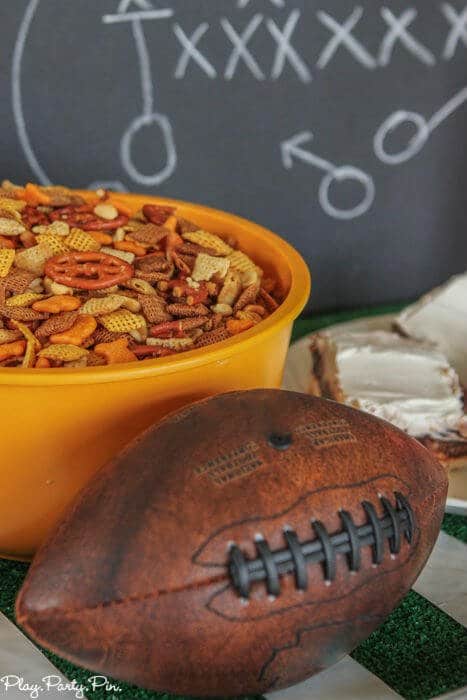 One of the most fun parts of going to watch a football game is the snacks. I don’t know what it is, but I just love concession stand food. Hot dogs, chicken tenders, pizza, you name it. I love it all. I decided to fill my party table with all of my favorites from the concession stand, just in party form. And since we turned everything into small individual servings, it was perfect for both the adults and the kids! 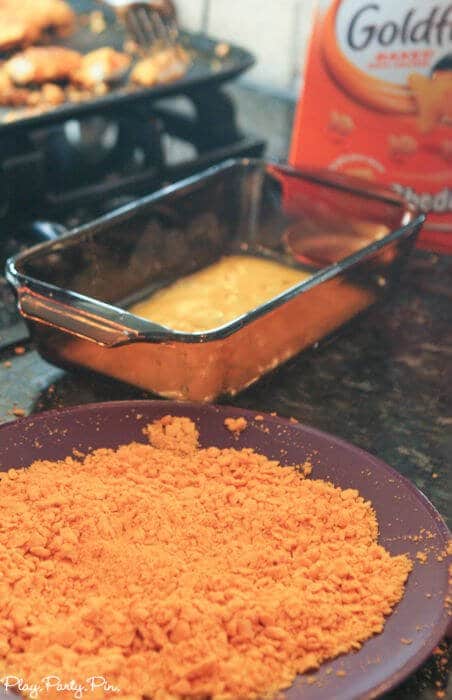 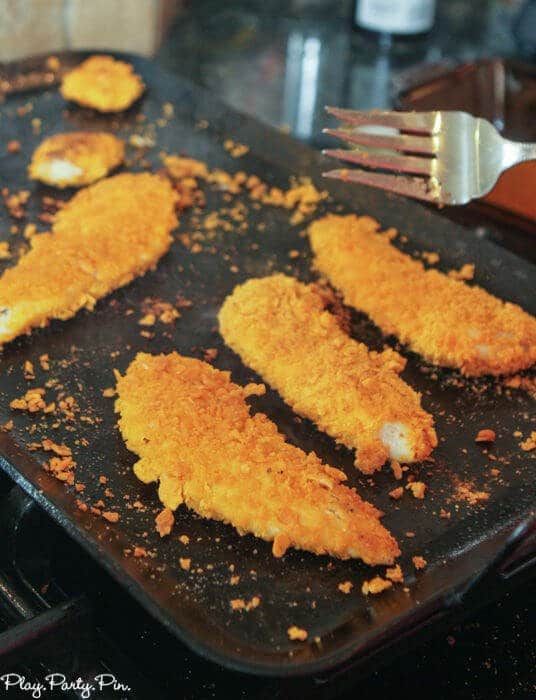 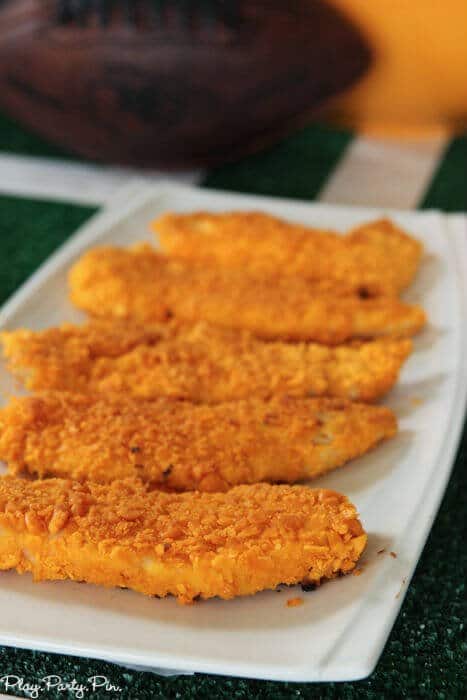 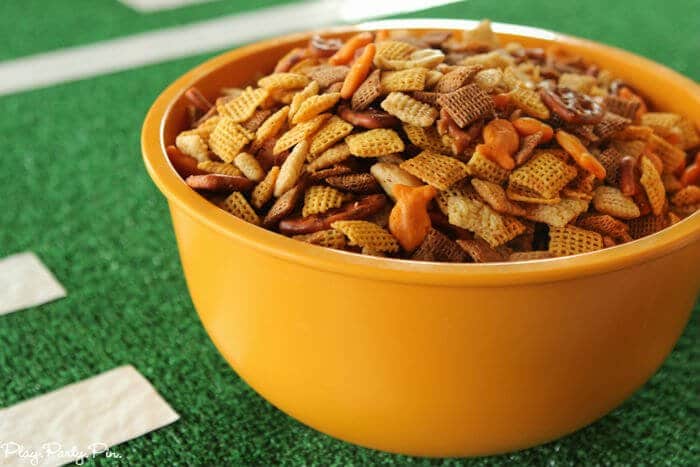 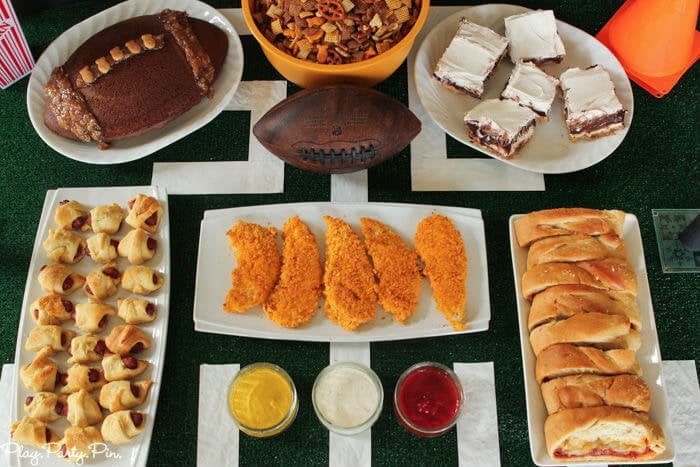 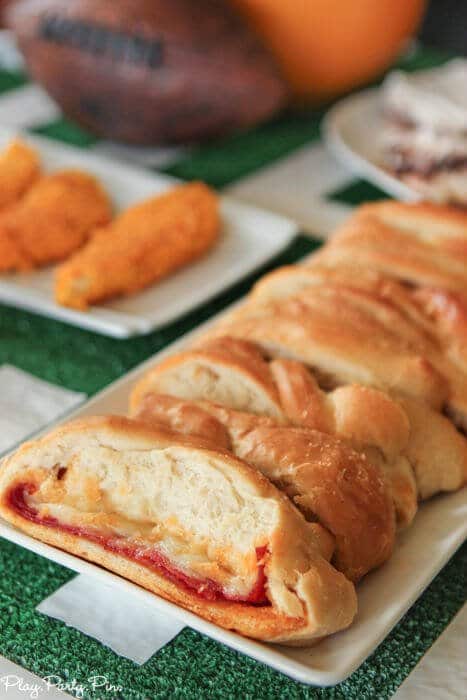 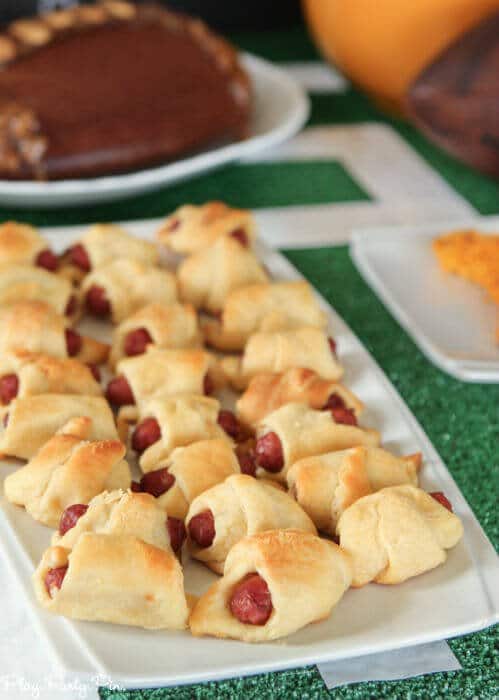 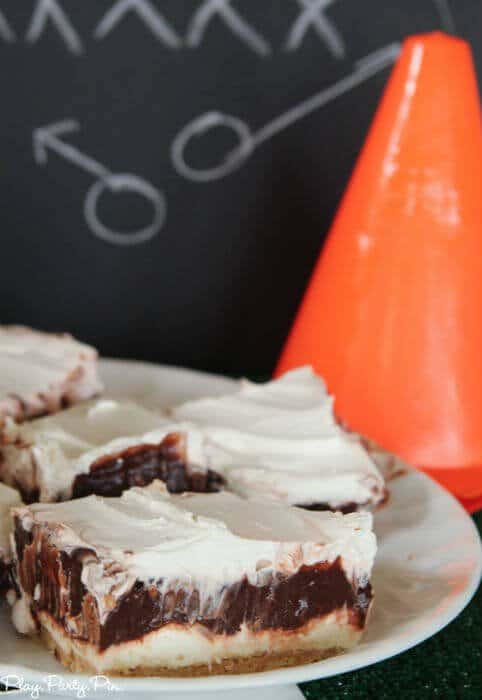 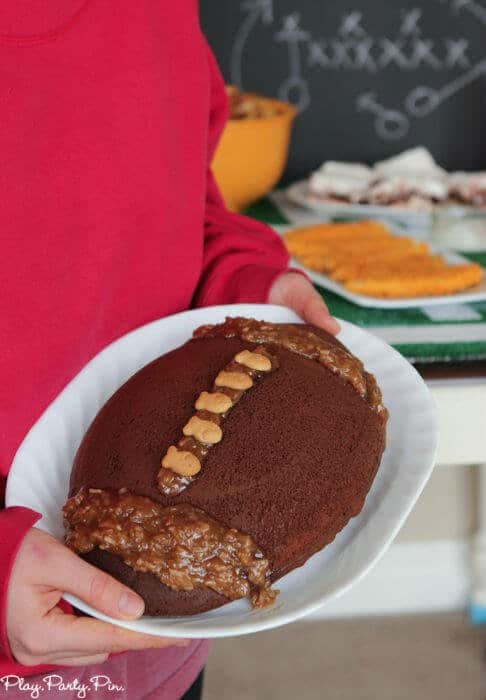 Once everyone was full of chicken tenders, snack mix, and pizza, we played some games before kickoff. My family has this thing where we’re pretty much amazing at catching food in our mouth when people toss it to us, you know like the extra shrimp that they toss to you at a Japanese steakhouse? I actually have a video of my little sister catching 13 shrimp IN A ROW at one of those places. Anyway, we like to toss these things to each other just for fun, so I thought it would be fun to have a tournament to see who was the ultimate catching champion.

And my little sister won again.

It wasn’t quite as impressive as the 13 shrimp in a row, but she did beat everyone else pretty easily. Okay, except for my nephews who got to do the “close your eyes and we’ll put it in your mouth” version. You can’t forget the kids after all! 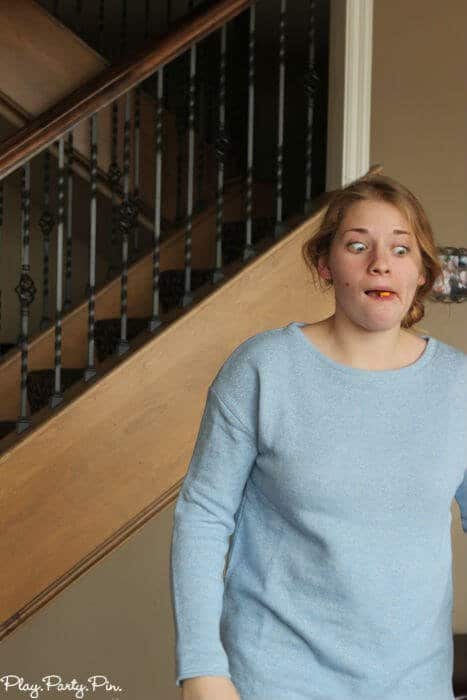 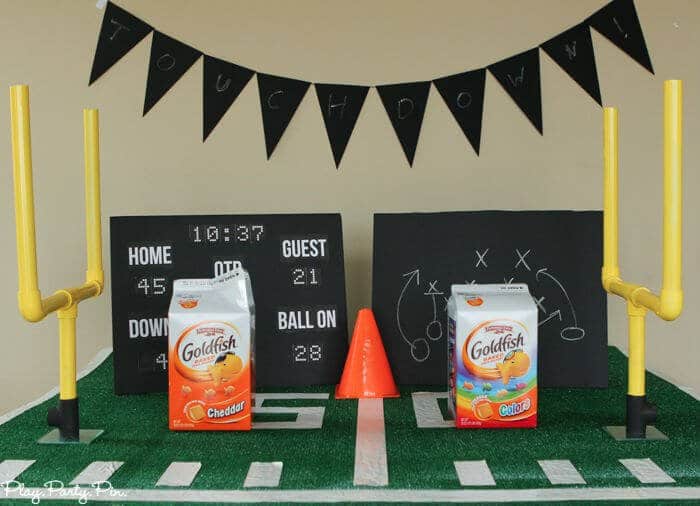 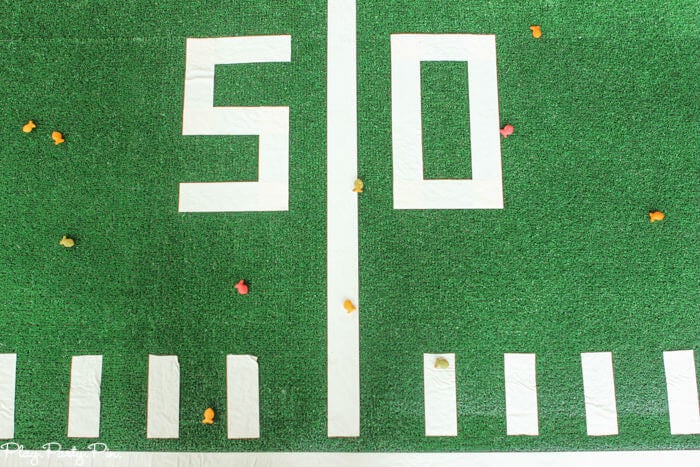 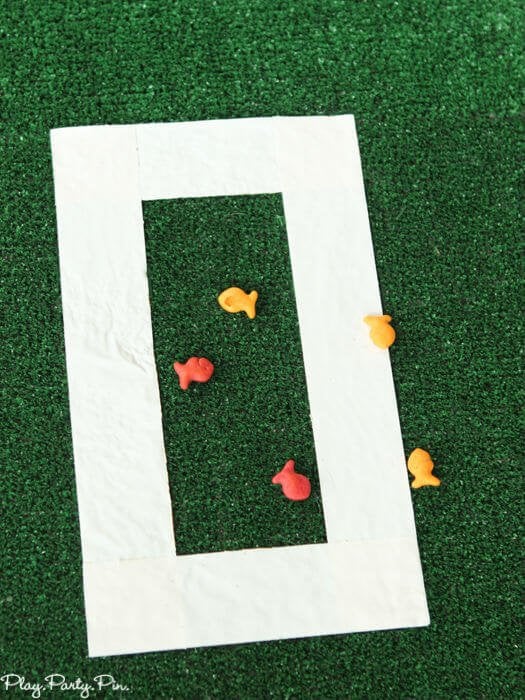 Games like this are fantastic for kids because honestly it’s kind of a crapshoot where the Goldfish crackers are going to end up, so my six-year old nephew actually ended up beating everyone else even though he kept tossing them into the open field where there weren’t any lines. He just got some amazingly lucky bounces. The kids played for almost an hour before we had to kick them off to give the adults a try. And the adult winner? My grandma. And in true football fashion, she even did a celebration dance for us. 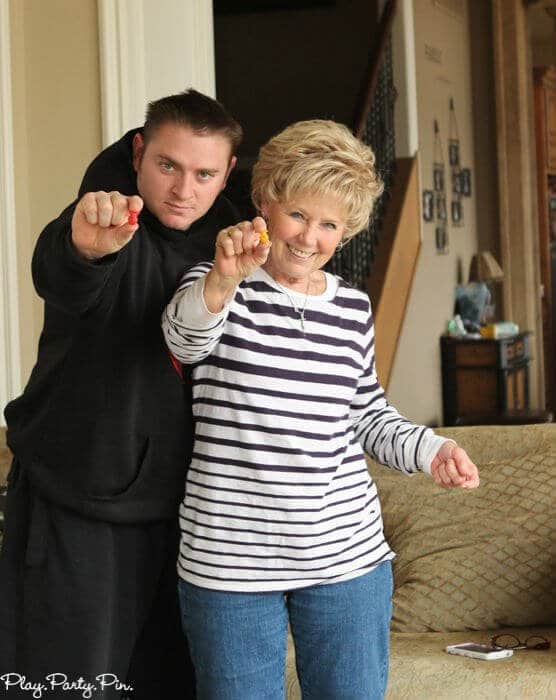 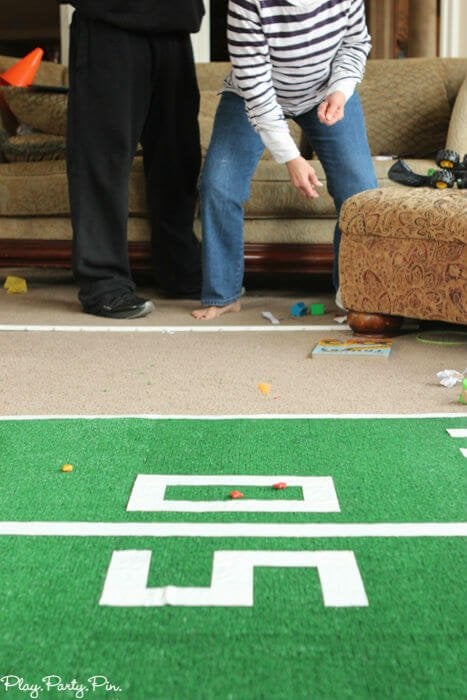 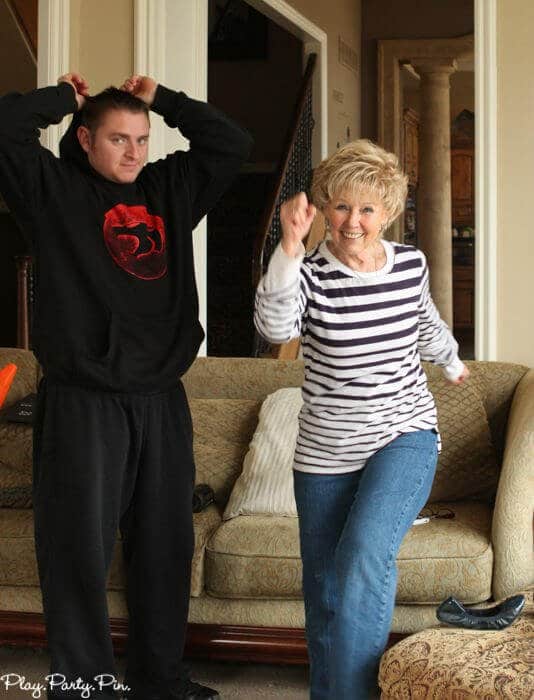 Pretty sure those two games kept us entertained right up until kickoff. Once the football games were actually on, we all played game day bingo using the free printable bingo cards I created and covered the spaces up with extra Goldfish crackers. And the guys snacked on Goldfish crackers and round two of concession stand snacks. 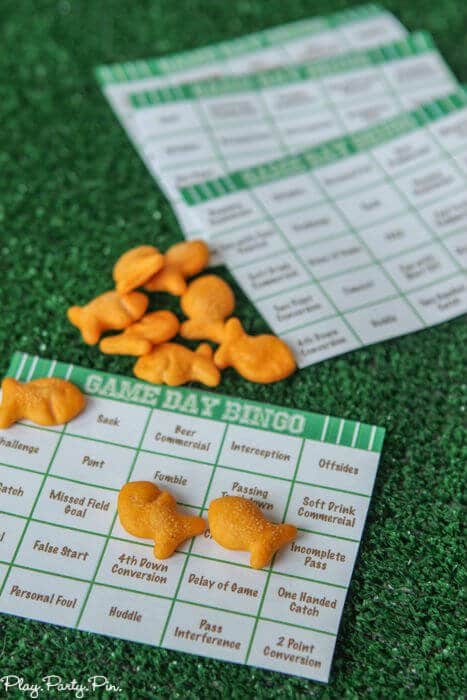 Does your family watch the big game together? What are your favorite football party ideas?