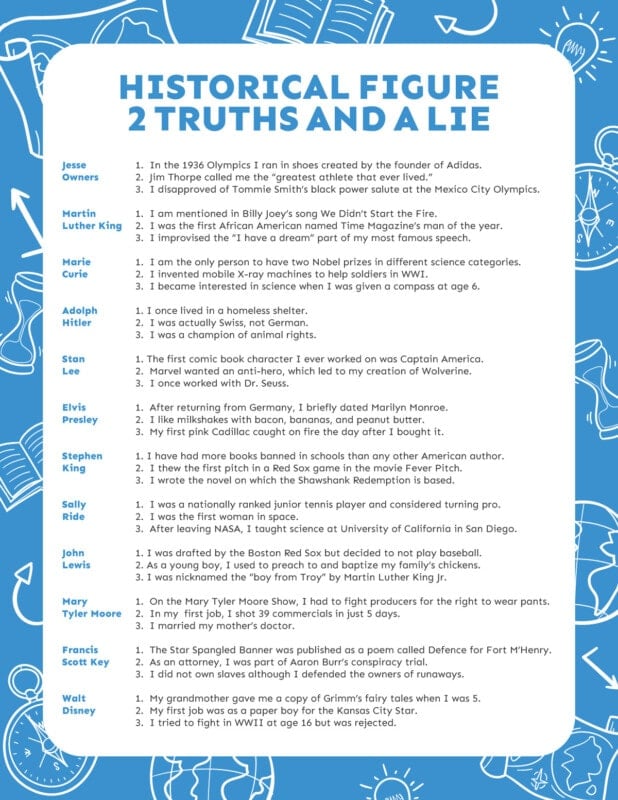 One of the most popular party games is two truths and a lie. I can almost guarantee you’ve played it or at least heard of it.

I mean it’s so popular, they even played it on an episode of Schitt’s Creek – or at least they tried to anyway.

The normal game is used a getting to know you game. Everyone comes up with two truths and one lie about themselves. You tell the group your three statements and they try to guess which one is the lie.

Honestly, it’s not my favorite game mostly because I can never come up with good truth and lie statements for myself. I just don’t have a super interesting background so my statements are always pretty lame. I mean other than the fact that I have about 200 fun board games.

BUT I love the idea of the game and wanted to do something fun with the idea that wouldn’t put people on the spot to come up with interesting statements about themselves.

There are a couple of ways you can use the printable to play a fun history game!

1 – Everyone Fill It out

The first way is the most straightforward. Give everyone a copy of the print out and have them circle which of the three statements they think is the lie.

Once everyone is done, go over the answers together. The person with the most answers correct wins.

You could also just print out one (for you) and read the statements to everyone. They’d record them on a piece of blank paper then same thing, go over them all together at the end.

2 – History Around the World

The next version turns this into more of an interactive movement game if you want to combine history and PE into one fun learning activity. This is inspired by one of our favorite outdoor games.

This is an easier alternative to the above option since they are going to be trying to avoid the lie and picking the truth instead.

Read the first statement and give everyone 10 seconds to run to the corner that is associated with one of the two true statements read. This is different than the one above where they’re choosing the lie – here they are trying to pick out one of the true statements.

People tend to know truths more than they know lies, so they’ll be more likely to be able to get this right.

Now you have two choices. The first is to tell everyone the answer and anyone who is in a true corner gets a point (they keep track of their own points). Person with the most points at the end wins.

The second option is to play it more of a knock out option where if you’re in a corner that’s the lie, you’re out of the game. The next round only the people who are in the true corners, stay in. Continue playing until everyone but one person is knocked out.

One rule – once you get down to less than four people left playing, there must be one person at least at each of the corners. So people need to choose their corner fast as the first one to get there gets to stay there.

Okay this last version is also more of an interactive option and a speed round option instead of the slower paced versions above.

For this one, you’ll read out the statements one by one and as soon as someone thinks they know the correct answer, they’ll either run to you and tell you the answer OR raise their hand.

You do need to be paying attention to see who raises their hand first (maybe get someone to help you).

If they get the answer correct, they get the point for the round. However, if they get it incorrect – they not only don’t get a point, but they are out for the next question. This will hopefully help people from just putting up their hand and guessing every single question.

The first person to get the correct answer wins the point for that round. Most points at the end of the game wins.

Depending on what you’re using this for, it’s always fun to have a prize for the winner! I’ve put together some fun historical figure themed prize ideas to get you started!

Want more fun learning games to play in the classroom or at home? These are some of my student’s favorites! 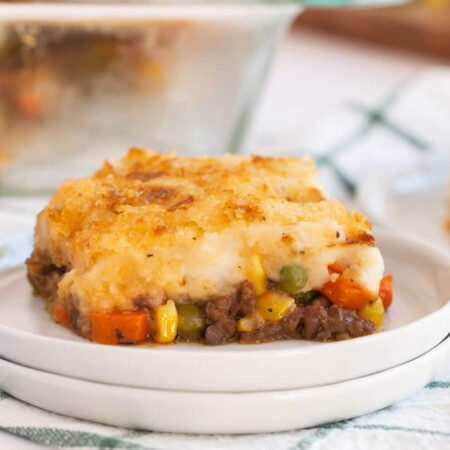 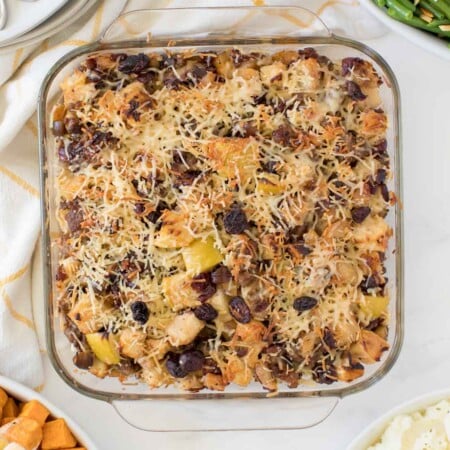