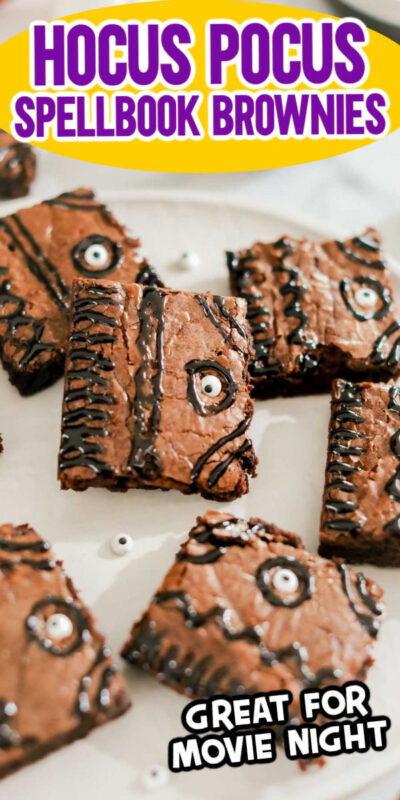 These fun Hocus Pocus brownies look like spell book used by the Sanderson Sisters in the classic Halloween movie! Make them up for a movie night, a Hocus Pocus party, or even just any Halloween party! They’re super easy to make and a great addition to any Halloween dessert table!

I still can’t believe they’re making a new Hocus Pocus movie honestly – it’s like they’re bringing back all of the classics. I’m hoping they can do the original justice, kind of like how they brought back Top Gun and the new one is a masterpiece. It’s not at the top of my list of favorite Halloween movies, but it’s a good one. And we watch it every Halloween season, so that’s something.

Anyway, these brownies will be the hit of a Hocus Pocus movie night or just to enjoy at home while you’re watching the new movie on Disney+ on September 30th. Or whenever you get around to watching it!

They’re designed to look like the Manual of Witchcraft and Alchemy that Winifred gets during the movie and that they use throughout the film. I mean Winifred Sanderson’s spell book is almost a main character, so I needed to make brownies just for it!

You could even make this fun Halloween dessert board and just add these delicious Hocus Pocus brownies to the board – it’s already witched themed so it would go perfectly with these!

How to Make hocus pocus brownies

Are you ready to make Hocus Pocus themed brownies? These aren’t just for Hocus Pocus fans, they’re easy enough that anyone can make them, whether you’re a big fan of not!

Prepare the brownies according to the directions on the package. It’s typically something like combining the brownie mix, eggs, oil, and water in a large bowl and mixing until smooth.

Pour the batter into an 8×8 or 9×9 square pan. This will give you thicker brownies, looking more like Winifred’s spellbook.

Bake according to the directions for brownies (not cake) on the box. Depending on your mix, it’s typically 30-35 minutes but some are as short as 20-25 minutes so just read the directions carefully.

You can really make these with any kind of brownie mix, but I always prefer high quality brownies like Ghirardelli. I just love the added chocolate chips in the mixture.

Allow the brownies to cool completely. You can either leave them in the pan or if they’re on parchment paper, you can pull them out and move to a cooling rack.

Once cooled, cut into 12 equal rectangles.These are Hocus Pocus spellbook brownies so you want to make them at least somewhat the shape of the spellbook so stick with wider rectangles compared to skinny and narrow.

Now gently press one candy eye into the right long side of each brownie about halfway down, toward the center of the brownies. Make sure you leave enough space to draw a circle around the eye. If you’re worried about the eye staying on the brownie, you can add a small dot of frosting underneath first, but it’s typically pretty easy to just press the eye into the brownie gently.

Next, use the black decorating icing or gel to draw a circle around the candy eye on each brownie.

To finish up the spell book, use the black icing in either a piping bag or a ziplock bag with the corner cut off to draw short horizontal lines (aka zig zag lines) like a book seam on the long side opposite the candy eye. You could also do one long straight line and short lines across it if you want.

Once you’ve done the seams, add half circles to each corner above and below the eye. You can also add additional vertical lines or swirls to add more character to your spell book brownie. You can google a picture of the actual spellbook if you want to be super precise but people will get the idea that these are Hocus Pocus book brownies just by the circled eye itself!

These fun Halloween brownies are perfect for a Hocus Pocus movie night, Halloween party, or just when you want a fun festive treat! They’re perfect for watching the silly antics of the Sanderson sisters on screen again! I mean I’m just so excited to see Bette Middler and Sarah Jessica Parker back up on the screen together!

Store the brownies at room temperature in an airtight container for up to five days. If they’re not eaten by then (guessing they will be), toss any remaining brownies. Or give them away so someone can enjoy these delicious Halloween treats!

Test the icing out on a piece of wax or parchment paper before you start icing the brownies. Sometimes store-bought icings can get a bit watery and that needs to be removed before icing. Same thing with melted chocolate, make sure to squeeze out any excess chocolate clumps to make sure you can get one smooth frosting line.

Do I have to use a box brownie mix?

No, you can use your favorite homemade brownie recipe as well!

What size candy eyeballs should I use?

If you want these to look the most like the spellbook, you can use a large or jumbo candy eye like the ones available on Amazon here. If you want to make these the easiest possible, just use regular candy eyes you can find in grocery stores all the time and especially around Halloween!

If you like fun and spooky treats, you’re in the right place! Try one and these next and who knows, you may just find your new favorite Halloween dessert! Or if nothing else, treats for your next Halloween party!

These fun Hocus Pocus brownies look like spell book used by the Sanderson Sisters in the classic Halloween movie! 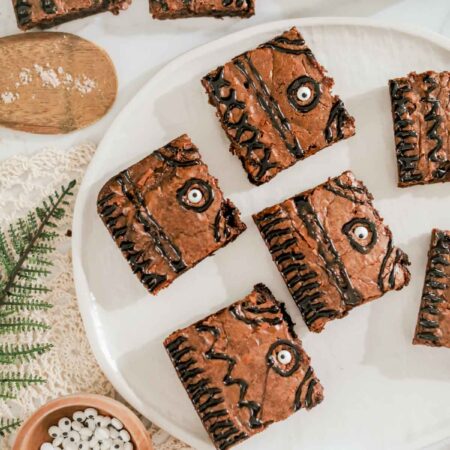 Store the brownies at room temperature in an airtight container for up to five days. If they’re not eaten by then (guessing they will be), toss any remaining brownies. Or give them away so someone can enjoy these delicious Halloween treats! Test the icing out on a piece of wax or parchment paper before you start icing the brownies. Sometimes store-bought icings can get a bit watery and that needs to be removed before icing. Same thing with melted chocolate, make sure to squeeze out any excess chocolate clumps to make sure you can get one smooth frosting line. Store in a cool place (but not the fridge) if you use melted chocolate into of black icing. If you store them in a warm place, the melted chocolate has a tendency to melt or smear easily. 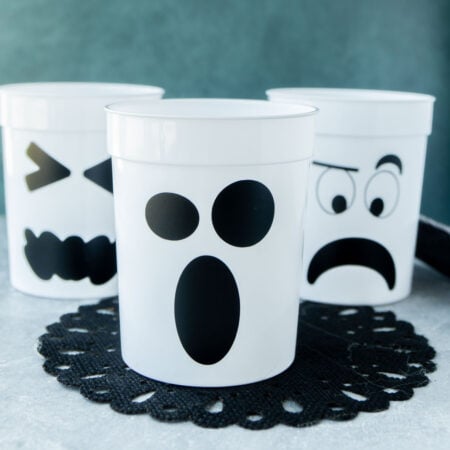 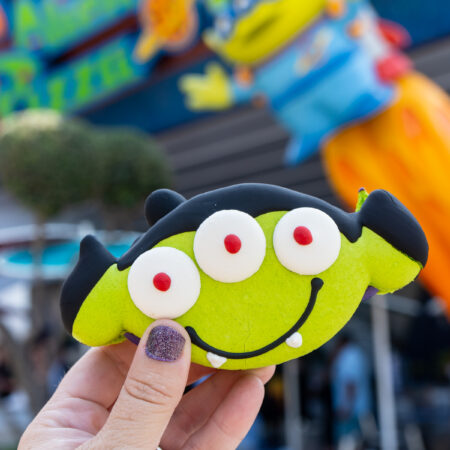