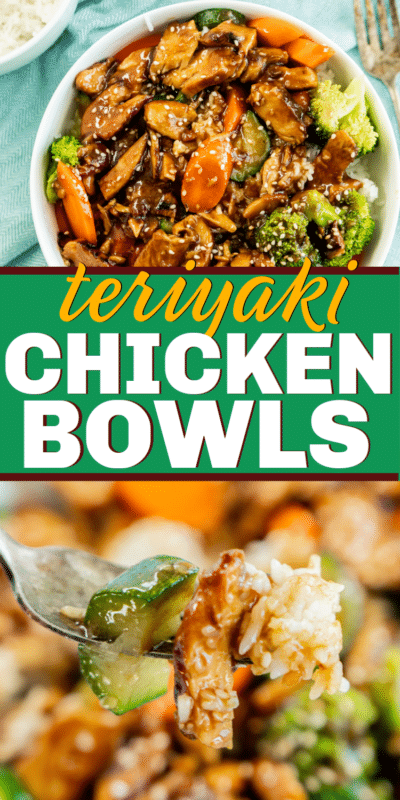 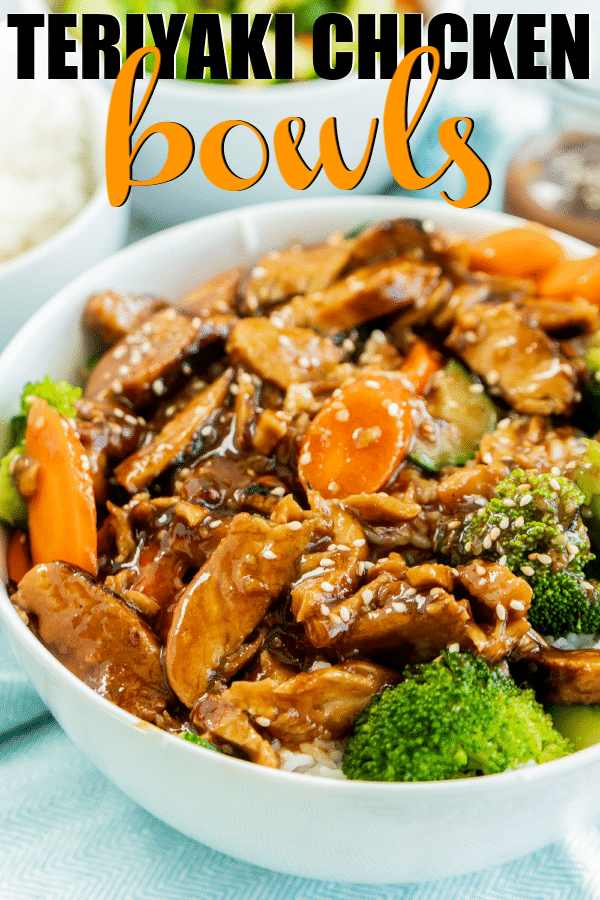 This post is sponsored by Perdue Farms. All opinions are 100% honest and my own.

Over the past few years my family has really started reading labels, eating organic as much as possible, and trying to just make better decisions for our health. It’s been a massive change in our household but definitely a good one.

But I’ll be honest – even as we’ve made these changes, I’ve still avoided really learning too much about where the food is coming from. My husband has done a lot of research and has been spearheading the charge, and I’ve just been along for the ride and the rewards.

Last month as an ambassador for Perdue Farms, I flew out to Maryland and for the first time had the opportunity to get a good look at where the chicken I eat regularly comes from. 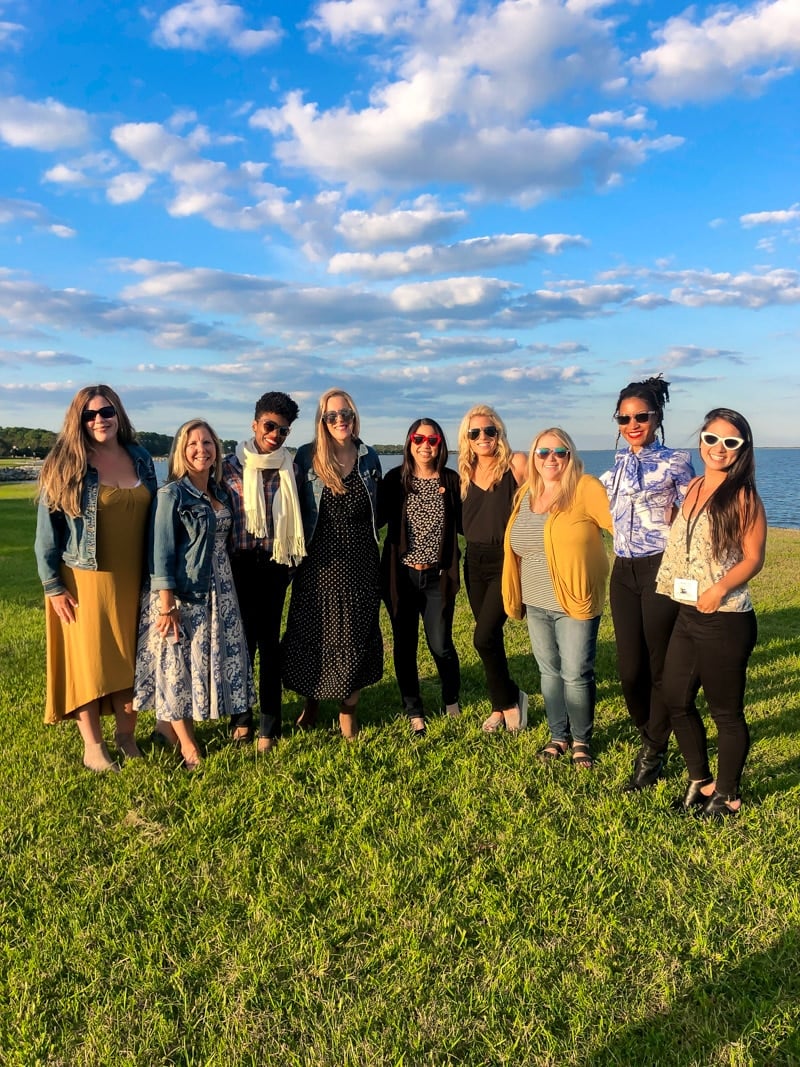 We met the Perdue family. We toured a hatchery and a number of chicken farms. We talked to the family farmers who run these farms.

And I learned a lot about chickens, chicken care, and what makes Perdue Farms stand out. 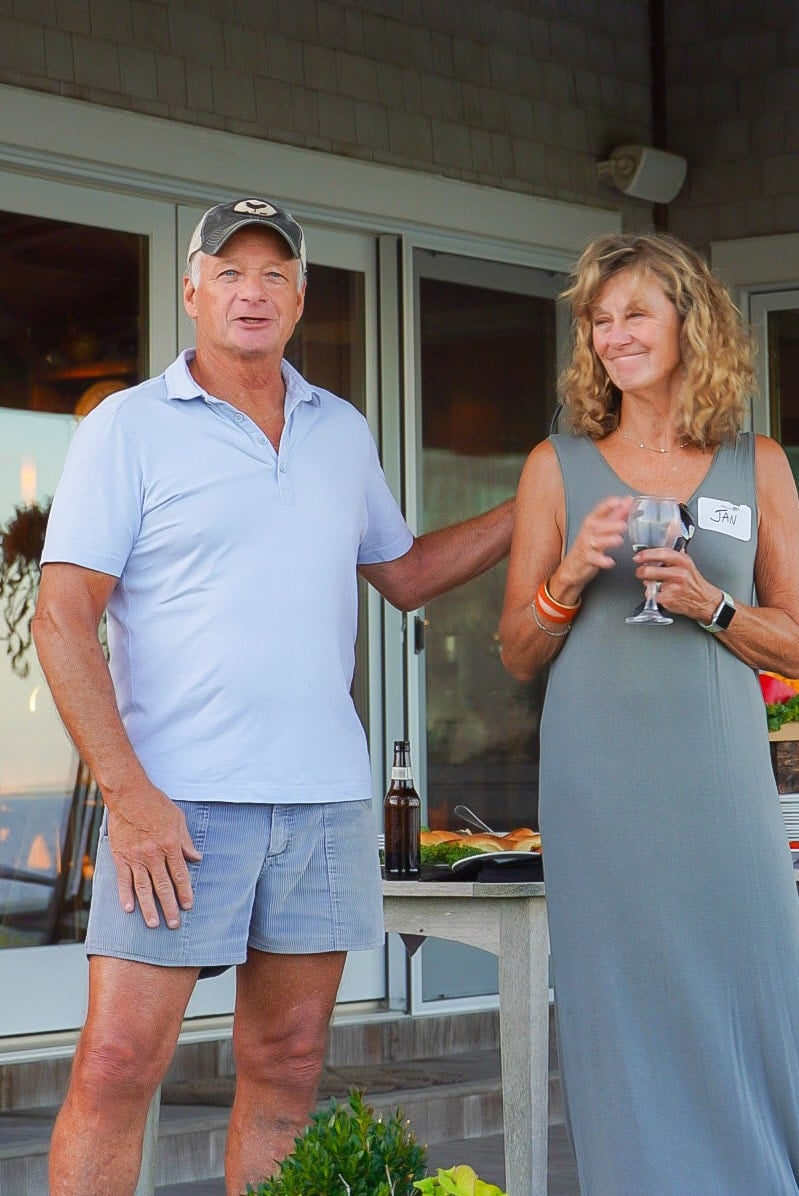 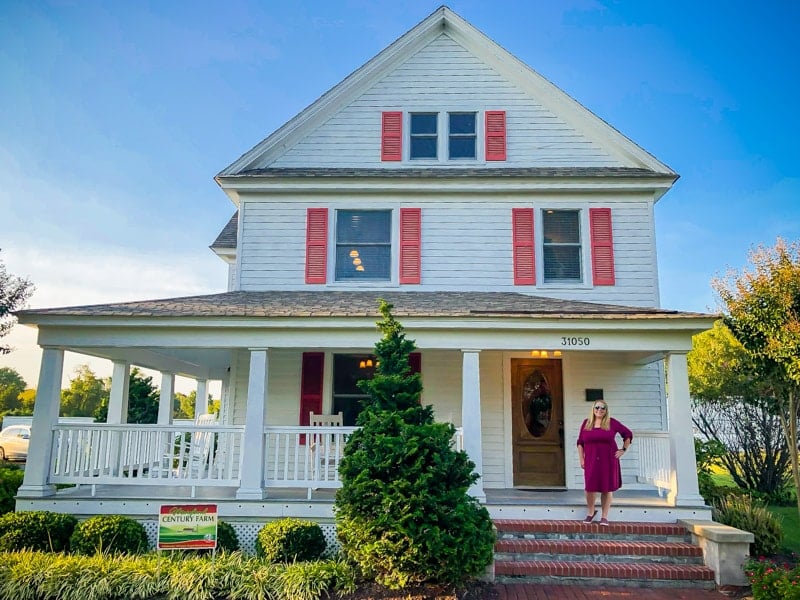 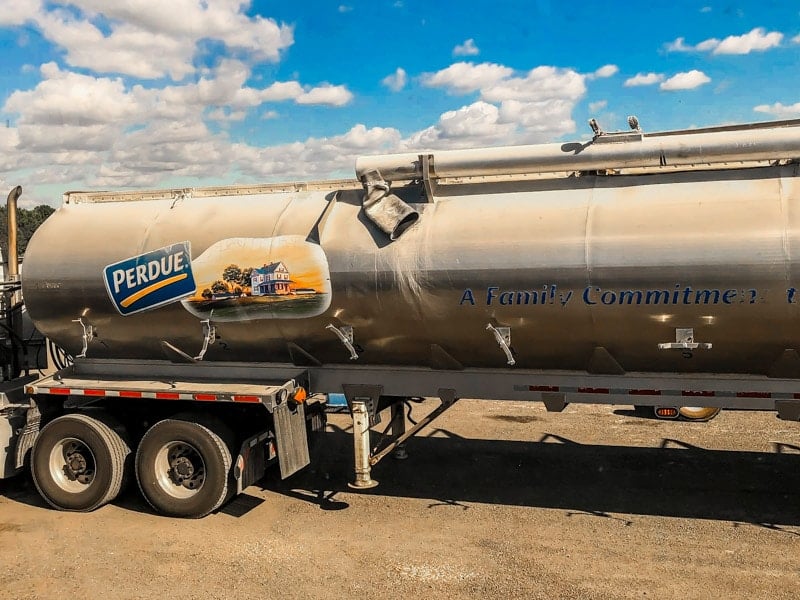 It wasn’t easy because let’s be real, it’s chicken farming. They are hatching chicks and raising chickens for the sole purpose of being eaten. These aren’t pet egg-laying chickens you’d find in a cute DIY hen house in someone’s backyard. They are birds that are bred specifically to be high quality meat that tastes great. 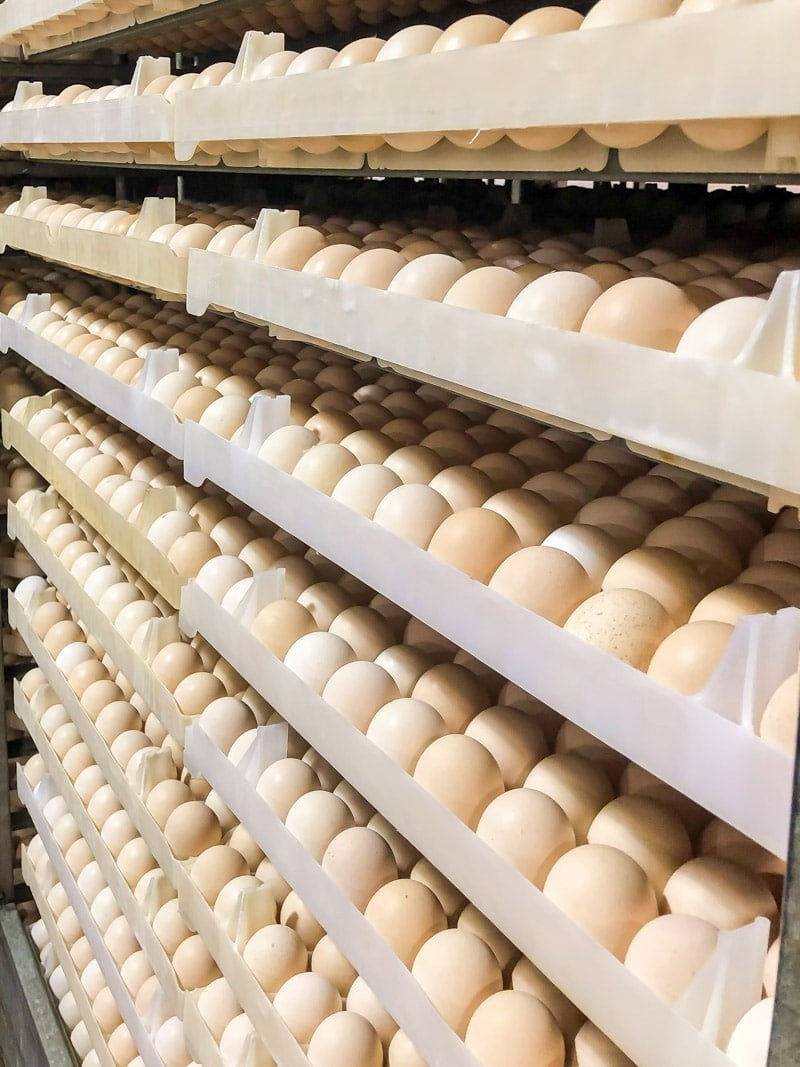 I had to realize that these chicken are crops, similar to corn in a cornfield that’s harvested when the time comes.

But at the end of the day they’re also animals and Perdue Farms is constantly changing and working on innovations to not only meet the needs of the chicken (food, drink, and shelter) but also the chickens’ wants like the ability to play and hide.

They’re also going above and beyond to make the lives of their chickens better even though they’re not forced to.

Things like putting windows and doors outside into their chicken houses, being no antibiotics ever, going after organic standards for even their non-organic chickens, and not feeding their chickens animal byproducts in their diets are three things that immediately come to mind, but there are so many more.

It was eye-opening and something I personally needed to see and better understand. And it’s something I think everyone – those who eat chicken and those you won’t – should understand as well and if you have any questions, feel free to leave comments on this post and I’ll get answers from the Perdue Farms team as quickly as possible.

What I Learned About Chickens

My friend Johnathan who was also on the trip described many of the things I learned about chickens in this post, like the fact that chickens flock together naturally.

When you see photos on the internet of Perdue Farms chickens crammed together in a chicken farm, it’s most likely because they want to. Or because they’re moving away from whoever is taking the photos.

That definitely happened when we walked into their territory.

When we walked into one of the organic chicken houses, there was tons of empty space all around – plenty of space for the chickens to move around if they wanted to, but they seemed more content to cozy around with one another than to roam in that empty space. 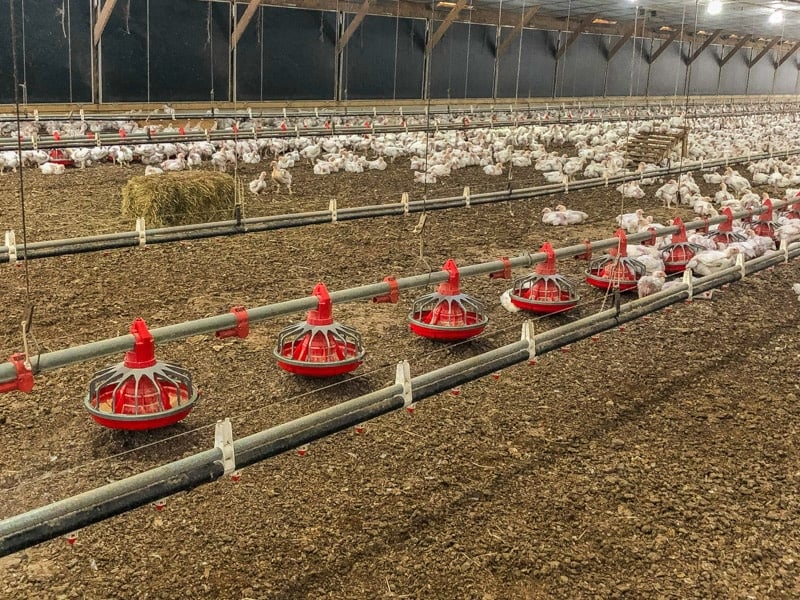 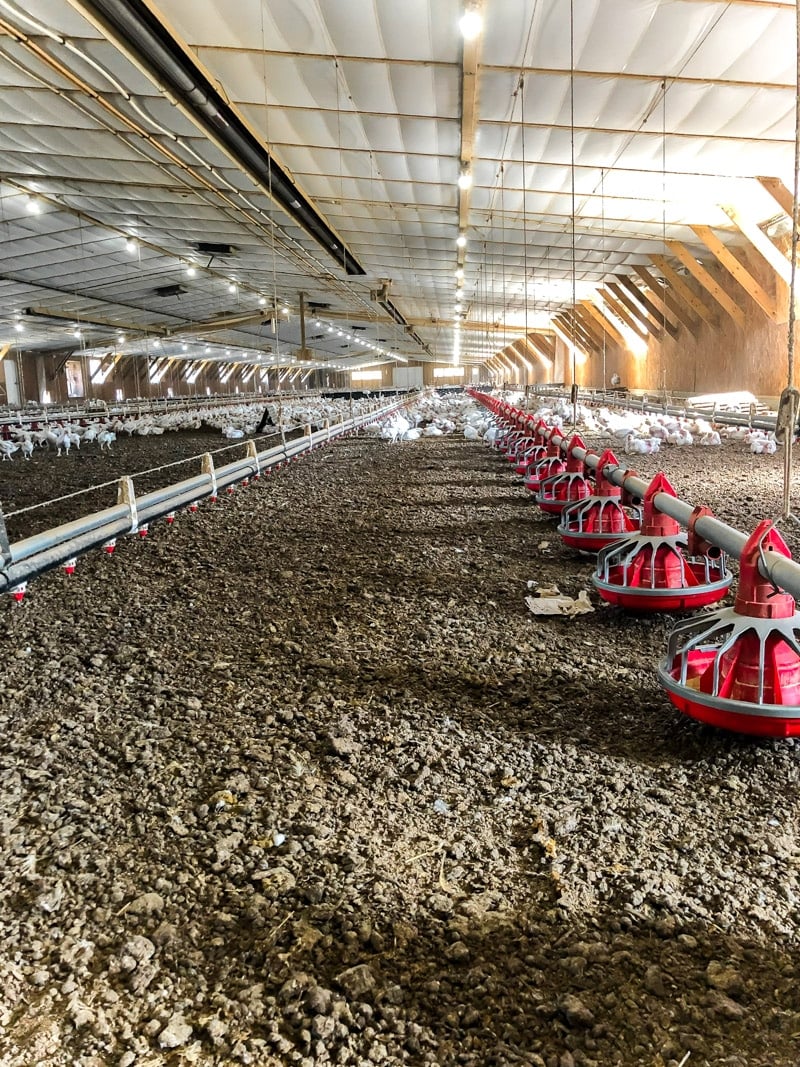 I also learned that chickens like to play. We have that in common.

Play is so important to chickens that Perdue Farms actually put together contest among their farmers to build the best enrichment activities to put in the chicken houses. And that’s just one of the contests they’ve done to improve the chickens’ environment.

Right now they’re also doing research and running a contest to see who can get their chickens to go outside more often.

That’s another thing I didn’t realize about chickens – they’re like us when it comes to where they spend their time. Even if going outside is an option, it doesn’t necessarily mean they want to go outside.

When their food, water, and climate control are inside – they often will stay inside even if outside is a choice. In fact, the farmers have a hard time getting them to go outside most of the time.

They had these great outdoor spaces for the chickens at one of their farms and there were very few chickens outside. It was a warm day, so I don’t blame them.

Other chicken fun fact for the day – free-range means that chickens have access to the outdoors. They have the freedom to roam around and go outside as they please.

Pasture-raised means that they are raised in a pasture outdoors and have access to shelter if they need it. Just a helpful tidbit of information if you ever see those terms on your chicken packaging. 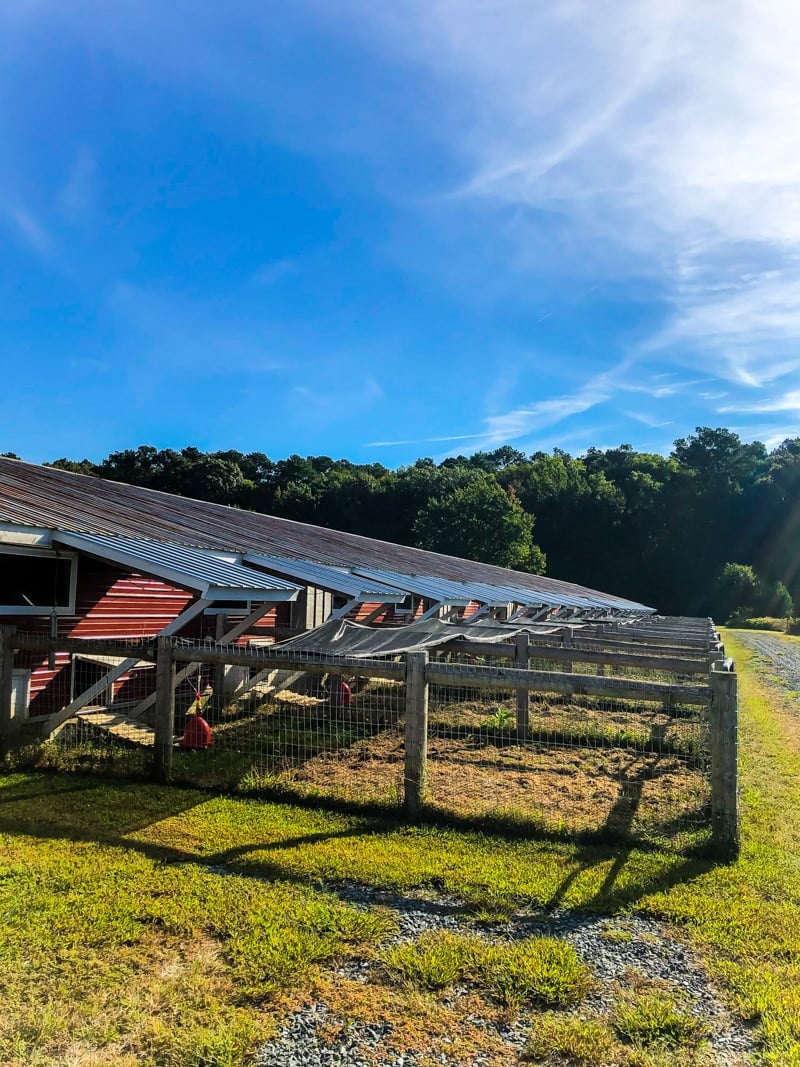 I could fill this entire post with all of the things I learned about chickens, Perdue Farms, and farming during my trip but I need something to share in upcoming posts!

So instead, I’m going to give you a delicious chicken recipe that uses Perdue Farms Harvestland Individually Wrapped boneless skinless chicken breasts. They come individually wrapped so you can use just as many breasts as you need then can put the others back in the freezer for the next time you want chicken for dinner.

Speaking of stocking up your freezer – Perdue Farms just launched a website where you can order all of your favorite meats from the Perdue Farm brands including these chicken breasts!

And as an ambassador, if you use this link, you can get 15% off your entire order plus a free pack of Perdue Farms Harvestland diced chicken breast, which would work great in this recipe as well!

The key components to this recipe are the teriyaki sauce and the teriyaki marinade for the chicken and those are both simple to make with ingredients you probably already have at home. Other than that, it’s really just rice, chicken, and veggies.

We ate these bowls pretty much weekly during college and pretty sure they’re going to be a staple in our home moving forward! 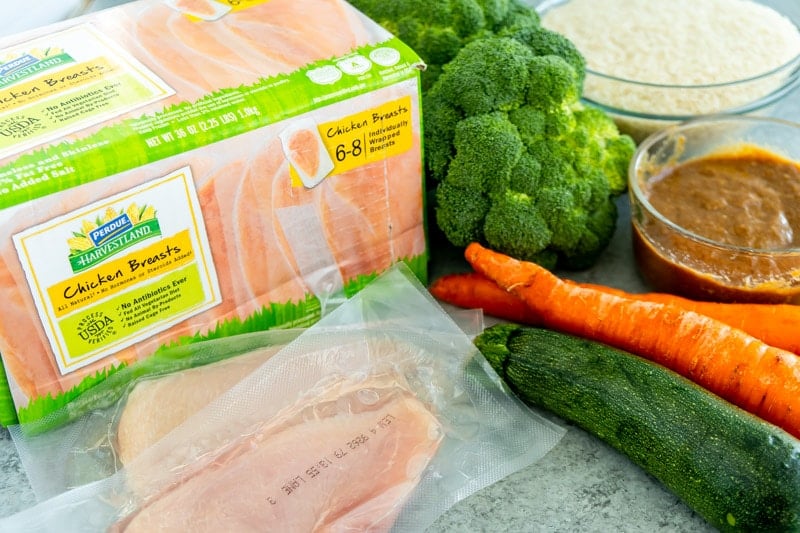 How to Make this Teriyaki Chicken Bowl Recipe

One of the reasons I love this teriyaki chicken rice bowl recipe so much is because it’s super simple to make, especially if you marinade the chicken the night before. It’s really just a few steps and makes a great quick weeknight meal.

Make sure to read through the recipe card at the bottom for more detailed instructions and tips for making the most of these bowls!

Combine all of the ingredients for the chicken marinade (listed in the recipe card at the bottom of this post) together in a gallon size Ziploc bag and mix. Then marinate your chicken for at least 30 minutes but ideally overnight. 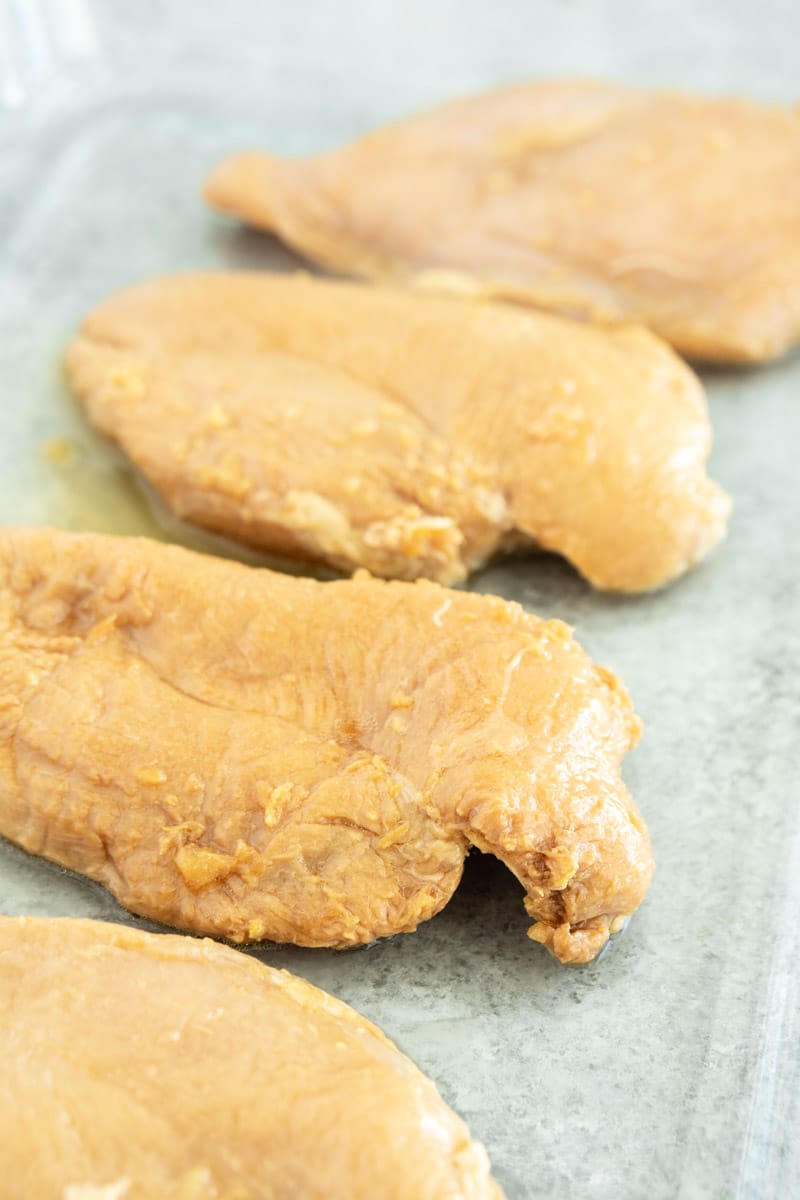 One of the secrets of the best flavored chicken is to start by grilling the chicken then finish it in the oven. It gives the chicken fantastic flavor while still keeping it moist. It’s how we cook the chicken in this white chicken chili and these white chicken enchiladas.

And in these teriyaki chicken bowls.

Grill one side of the chicken breasts then put them in the oven to finish cooking. Once cooled slightly, slice the chicken thinly. 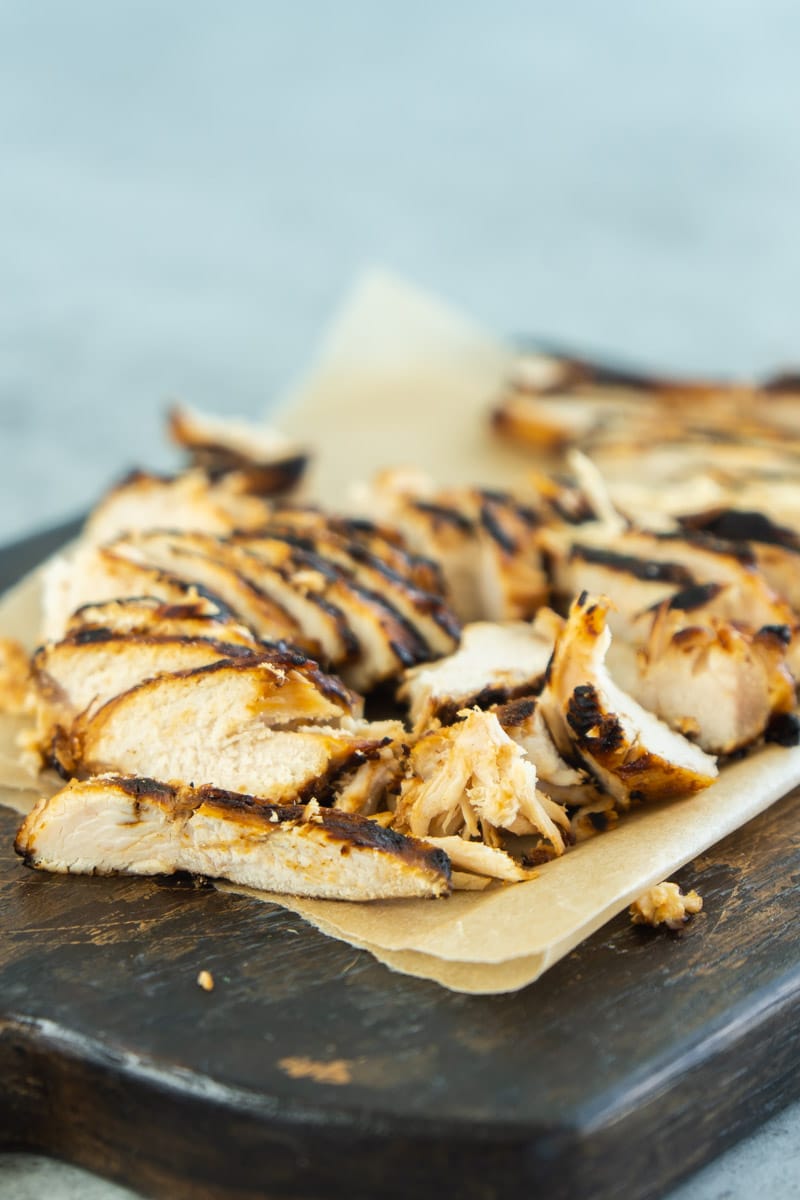 While the chicken cooks, steam your rice and veggies of choice. It’s really good over this coconut rice, but you can totally use regular rice instead as well.

Combine all of the ingredients for the sauce in a sauce pan and cook over medium heat until it boils. Add in sliced chicken and stir to combine. 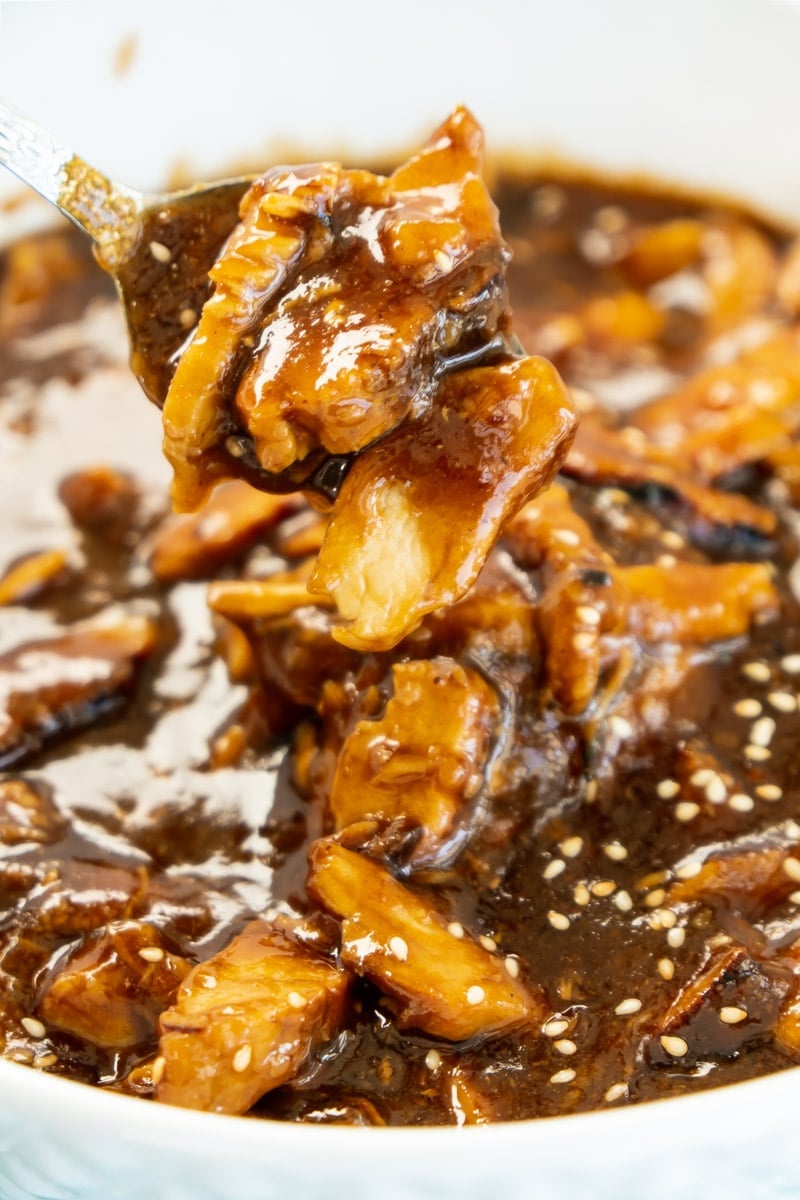 Pour the teriyaki chicken (in the sauce) over rice and veggies and enjoy warm. 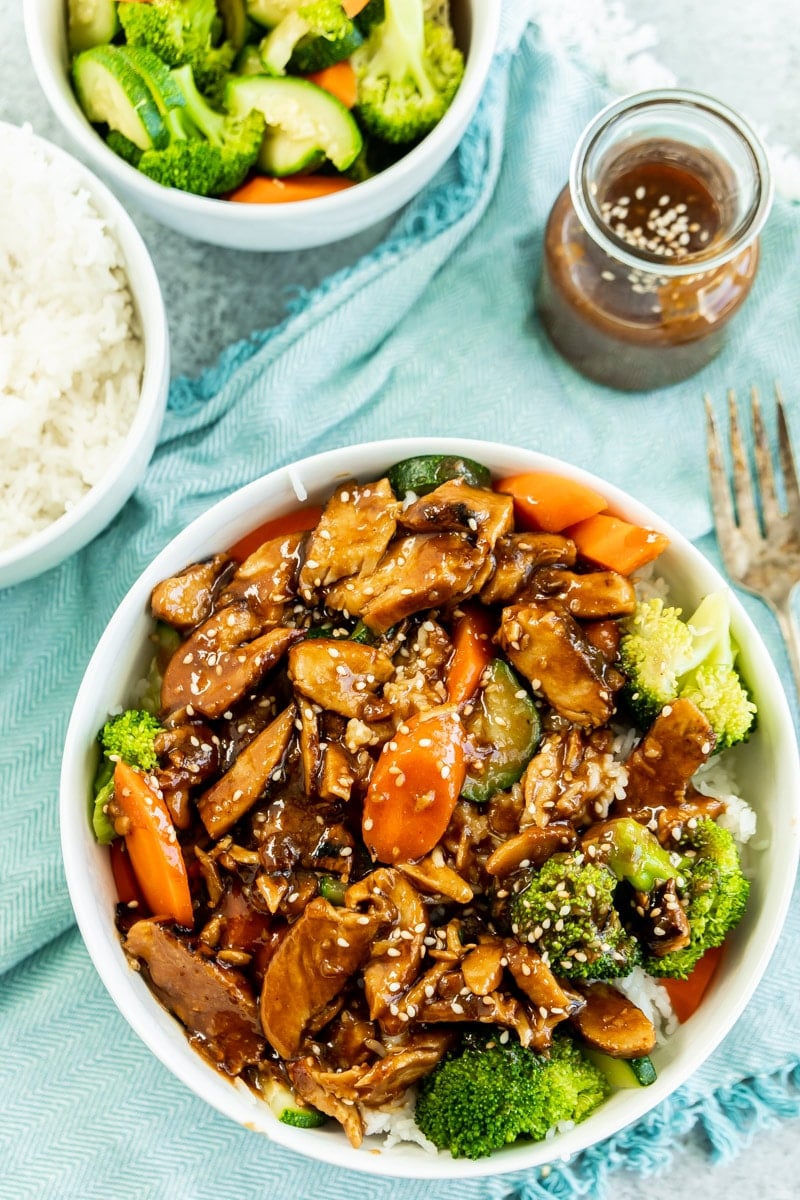 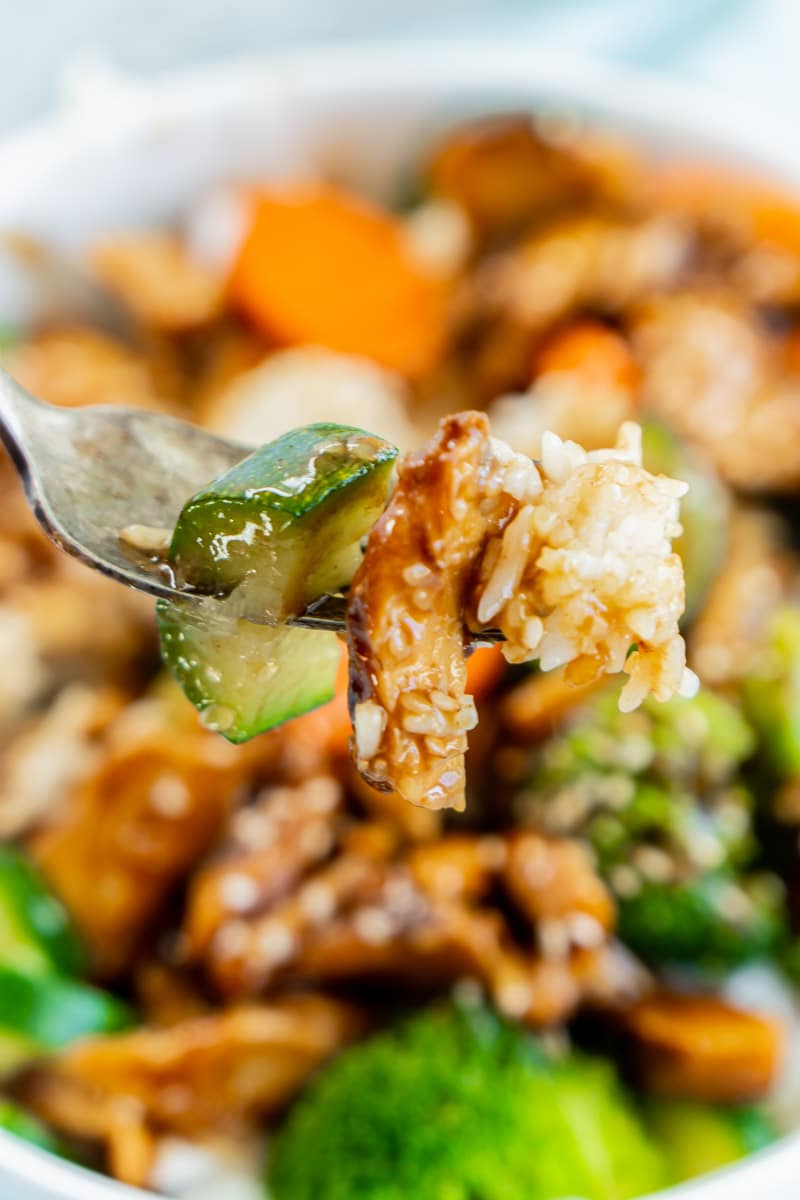 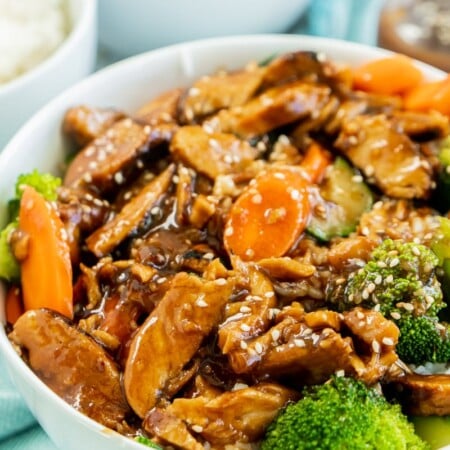 For the Teriyaki Chicken Bowls

Coconut aminos can be substituted directly for soy sauce.  If you'd prefer a less sweet teriyaki sauce, omit the honey.

Author: Britni Vigil
Course:Dinner
Cuisine:Chinese
Did You Make This?Tag @PlayPartyPlan on Facebook and Instagram and hashtag it #playpartyplan so I can see your creations! 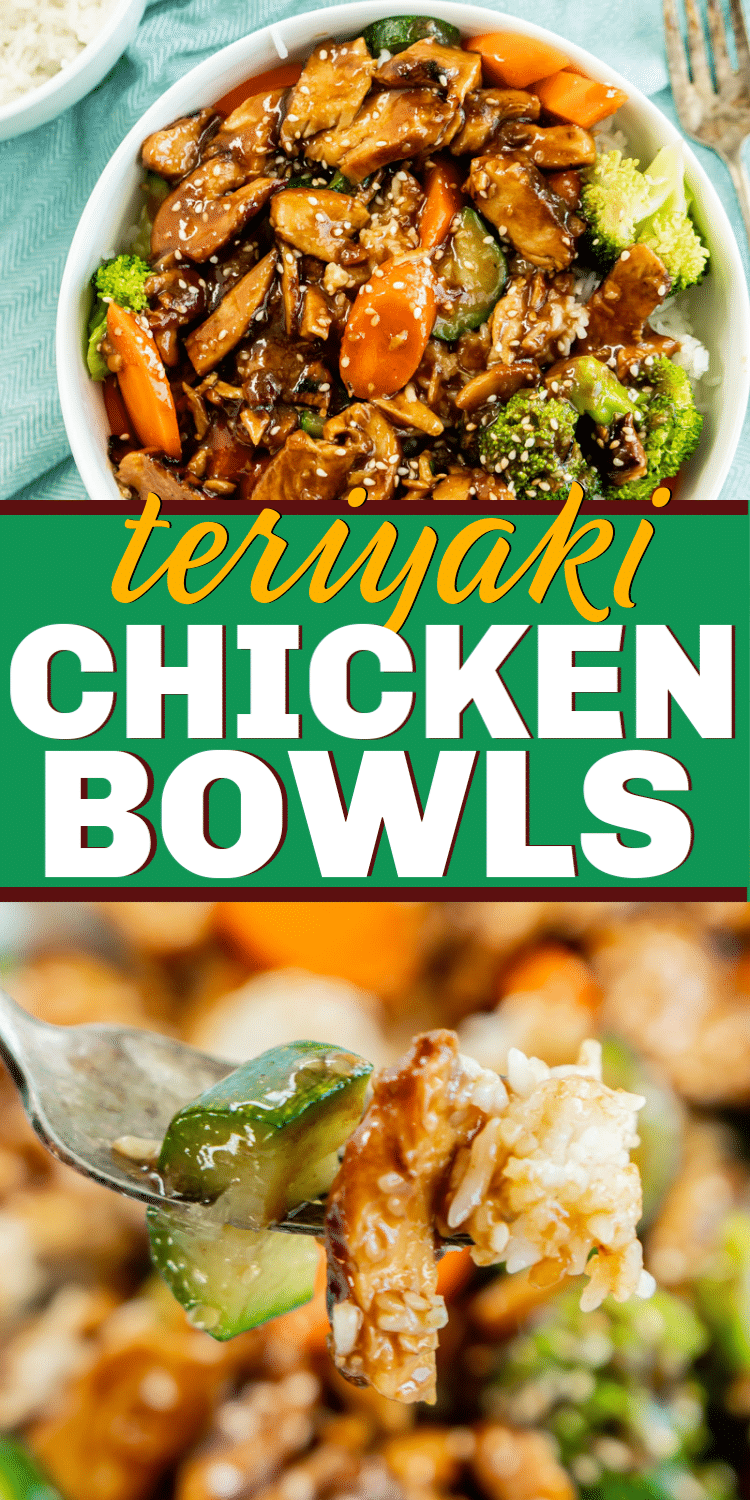 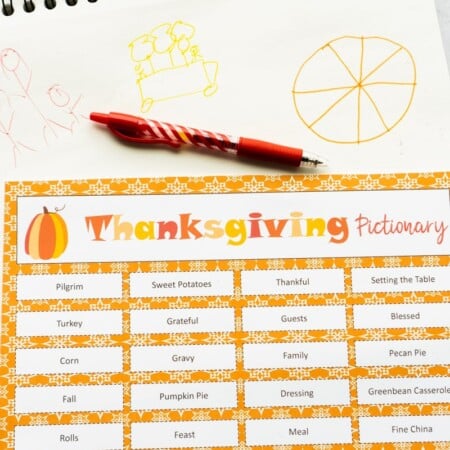 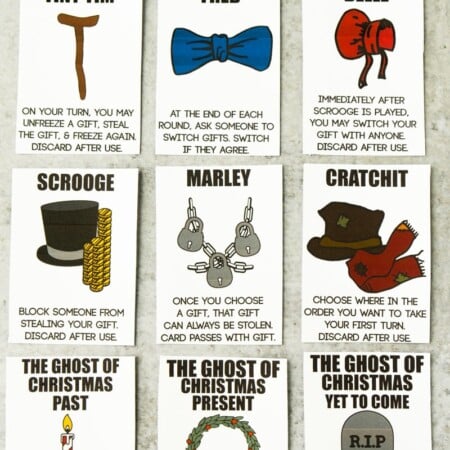