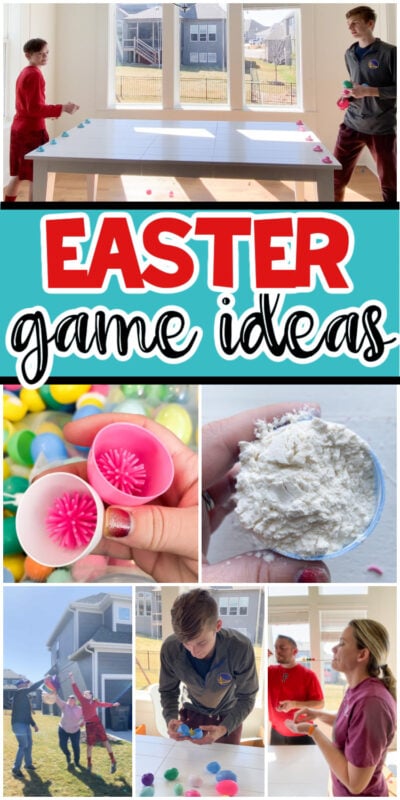 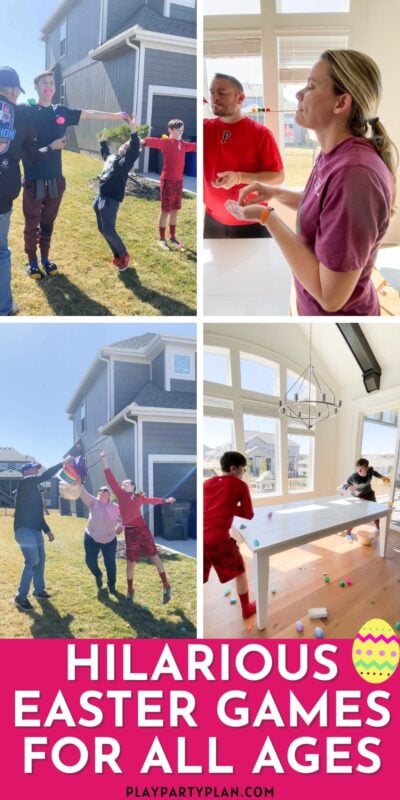 There is just something magical about spring. Maybe it’s the fact that you can be outside for more than five minutes without freezing or that the hours of light are longer or the colorful flowers popping up all over the place. Who knows.

Robin Williams had it right when he said said “Spring is nature’s way of saying let’s party.”

So naturally, with the weather finally being warm enough to be outside for a few minutes, I hosted an Easter celebration using my favorite spring party ideas to celebrate.

And of course, there were lots of games. Tons of funny Easter games that would work for any age!

But be warned, you may be laughing too hard to actually get through all of them.

I’ve broken this into two different categories – Easter games for groups and Easter minute to win it games. If you’re looking for printable Easter activities, I recommend checking out this post next.

Since Easter is typically a time for families and friends to get together, I came up with a number of Easter games that would be fun for groups to play together! Play individually, in teams, or in big groups!

Give two players a small pack of Peeps and a basket of empty Easter eggs. Have each player stand on either ends of a table and setup their Peeps along the edge of the table (within 2 inch of the end of the table).

If you have a square table, you could even do this with four players playing at once!

Give a member of each team a small bouquet of fake silk flowers. Another member of the team must toss a plastic Easter egg from a designated “pitching” line, and the first player must try to hit the egg with the flowers (like baseball).

The first player to hit and crack open five plastic eggs with the flowers wins.

This game is played similar to the regular 500 game (instructions in my outdoor games post). Give everyone playing an Easter basket except for one player who will be the first tosser. Give them a bucket full of plastic Easter eggs.

Have the tosser stand on one side of the yard (facing away from the catchers) and the catchers with their baskets stand about ten feet away. When everyone is ready, the tosser should pick an egg, toss it over their head and say a number – 100, 200, 300, 400, or 500.

First person to get to 500 switches with the tosser.

Hide plastic eggs like you would for an Easter egg hunt, making sure there are enough eggs hidden for each player playing.

Line each team up in a straight line. The first player on each team must run to the designated area, find an egg, and return to their team.

The next player must do the same, continuing until every person on the team has found an egg.

If you’re making this for a Cinco De Mayo party, I always think it’s fun to put a little dessert on the board as well since it’s a fiesta! I added little churro twists and Mexican sprinkle cookies to mine but you could do anything with churros, Mexican wedding cookies, dark chocolate, simple margarita cupcakes, or really anything! Or skip adding them to the board and just serve this sopapilla cheesecake alongside the board instead!

Or try any of these other creative Easter egg hunt ideas in the form of a relay instead!

This game is played like a water balloon toss (one of my favorite water games) but with plastic Easter eggs that are filled with flour. Start by filling large Easter eggs with flour – one per team. I also recommend taping over the holes if your eggs have holes in the top and bottom!

Have one player from each team line up in a horizontal line then have their teammate stand facing them in a parallel line. Give each team a large plastic egg half filled with flour.

When you say three, one teammate will toss the egg to the other teammate and their teammate must catch it without breaking it. If they drop the egg or break the egg and get floured, their team is out.

After each toss, the back line of players must take a step back before everyone tosses again.

The last team to break or drop their egg wins. So basically, no flour = winner!

Split into teams of two and give each team a basket full of 10 plastic eggs that are cracked apart (not the ones with attached hinges).

When you say go, teams must work together as pairs to put the eggs back together, colors matching to the same colors.

The catch? Each player can only use one hand to help put together the eggs. First team to finish putting together all of their eggs wins!

This is another team game! Split into pairs of two and give each pair a big basket of plastic Easter eggs of all shapes and sizes.

One person on each team is going to be the “scarecrow” (for lack of a better term). When you say go, the first teammate has to put their arms out straight (palms down) by their sides and keep them there.

The other teammate has to race to try and balance as many eggs as possible on their teammate. Eggs cannot be put into clothing, pockets, etc. but can be held in the mouth, in between fingers, squeezed between knees, etc.

The team that can balance the most eggs at the end of a minute wins.

A Pair of Eggs

Fill eggs with pairs of prizes – meaning matching prizes in two different eggs. So for instance, you might have Reese’s peanut butter eggs in two eggs, $1 bills in two eggs, and Easter bouncy balls in two eggs. Make sure all of your prize matches are different because you’re going to use them to play a memory/matching game.

If the eggs don’t match, they put them back where they were and close them back up.

The next person goes and does the same thing. Keep going until all prizes are matched and removed from the board. Everyone keeps the prizes they found and whoever finds the most matches total wins a bonus prize!

In this game, the goal is to the best first person to get three sets (a set = three of the same color jelly beans), and it’s played a bit like the card game Spoons.

Start by pouring a full bag of jelly beans into a brown paper bag. Then have everyone playing randomly pull four jelly beans from the bag and hide them in their hand (or on a table, covered with their hand).

If anyone happens to pull a set (3 of the same color), they place that in front of them and pull another three jelly beans before the game even starts – just luck of the draw!

Anyone who can make a jelly bean set with the jelly bean they were passed puts the set out in front of them and takes more jelly beans (blindly) from the bag.

Once all sets are complete for the round, count to three and pass again. Do the same thing with sets.

Keep going, passing jelly beans, and making sets until one person has completed three sets and wins the game!

Easter Minute to Win It Games

These Easter minute to win it games are ones that you can play with individuals, groups, or teams!

For details on how to play minute to win it games in general, make sure to check out this post!

Give each player a little cup filled with Jelly beans and a popsicle stick.

If this is too difficult for your group, you can have them try to a lower number!

Give each player a bowl full of five different colored Jelly beans such as red, purple, blue, green, and orange, making sure everyone has the same exact number of jelly beans. Place the five cups per player around them in a circle.

Players must sort the cup of jelly beans by picking out one Jelly bean at a time and then placing it in one of the cups, designating that cup for only that color.

First player to sort their jelly beans into the five cups first wins.

Stack the bottles on top of each other so you have a pyramid with three at the bottom, two in the middle, and one on the top.

Players must stand behind a line and toss baseballs to knock a stack of bottles completely off a surface using just the baseball, like the popular carnival game.

Make things more challenging by blindfolding the player. Just make sure no one else is anywhere near the tossing area. And I recommend giving them a partner to help give them directions.

Fill a bowl completely full of Jelly beans. Set the bowl on a table on one side of the room.

Give each team a spoon and a small cup. Players must transfer Jelly Belly beans from the bowl to the fill their small cup using only the provided spoon, which must be in the player’s mouth anytime it is touching the jelly beans.

Make it more difficult by putting the cups on the other side of the room or table.

Players must keep three spring colored balloons up in the air. If players can keep them up for more than a minute, start adding an extra balloon per 30 seconds until someone gets out.

If it’s too tough, have them try again with two balloons or one balloon. This is one of my favorite minute to win it games for groups!

Connect the ends of the silk flowers to the ends of actual metal springs (coils), testing to make sure the flowers bounce.

Give each team two water bottles, one completely filled with Jelly beans and the other completely empty.

When you say go, players must transfer all of the Jelly Belly beans from one water bottle to the other. If they drop Jelly Belly beans on the ground, they have to put the ones that dropped back in the bottle they started in and keep going.

If you want to make it harder, make it a team game and have one player transfer all of their jelly beans to a teammate holding an empty water bottle.

In addition to the bowl of Jelly Belly beans, give each team a recipe card that has just the names of the flavors (not the pictures) for each recipe they have to “make.”

First team to make all of the recipes wins.

Give each team a chilled wash cloth. Have the players stand across from each other, about 10 feet apart – just like in the egg toss above.

One teammate must toss the chilled wash cloth onto the other’s forehead to “cool” their spring fever.

First team to get the chilled wash cloth to stay on their teammate’s forehead (without the teammate’s help), wins.

Whether you’re looking for fun Easter egg hunt ideas or something more like Easter bingo, these ideas can help! 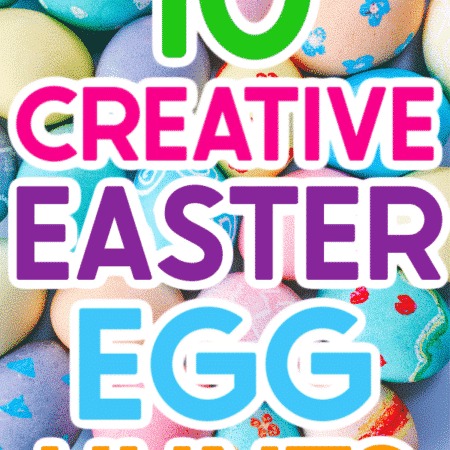 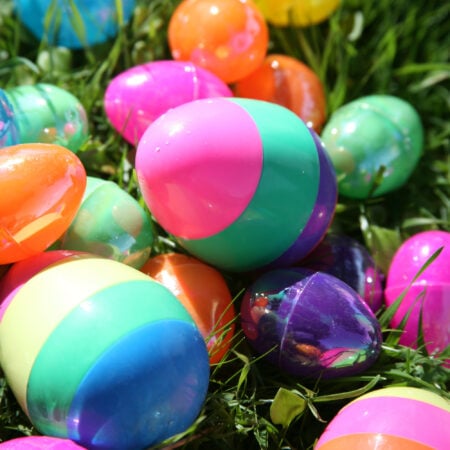