This post contains affiliate links to products for your reference. If you purchase via my links, I will receive a commission at no additional cost to you.

And best of all, they work great as games for adults, games for kids, and even games for preschoolers! We did them with my entire family – age 5 to grandparents – and everyone loved them!

These games are all played minute to win it style, which means you can play them in one of three different ways depending on the group you’re playing with. Start here for more info on minute to win it games.

If you have a large group, go with a team competition. And if you’re playing with a group of younger kids like preschoolers, you could just get rid of the clock all together and play an everyone wins style.

In this version, one player will be trying to beat the clock for each game. So for instance, they will have to try and get all of the Lucky Charms from one bottle to another within a minute (hence the Minute to Win It). If they do, they win a prize. If not, let someone else have a shot.

If you go with this style, I recommend choosing a different person for each game.

In this style, you’ll pick two players for each game who will going head to head against each other playing a game rather than trying to beat the clock. For example, you would give each person a bottle and see who can get the Lucky Charms from one bottle to the next first. The first person to finish wins the prize.

Rotate through people for each game, repeating players as necessary.

In this style, you’ll split your group into two (or 3 or 10 depending on the number of guests) teams. For each game, teams must choose one player to compete head to head in the game with the other teams. So for instance, each team will be given a bottle and the first team to finish will receive 10 points, the second team will receive 5, etc.

This works best if you have quite a few people and is a good way to get everyone involved cheering for their team.

This is the full list of supplies needed to play all of the games. If you’d rather play just a few of them, obviously just order the supplies you’ll need to play those individual games. I just put them all here in case you wanted a full list to shop from. Enjoy!

Watch the video below to see how fun these games are! They were perfect for our family of all ages!

First person to get all of the Lucky Charms from one bottle to the other wins!

Find as many green items of clothing as you can and put them in a bucket for each team.

Players must either hop like a frog, or if you want to use two players, must play leap frog from their side of the room to the bucket on the other side. When they reach the bucket, they must put on one item of clothing and hop back.

The first player to successfully go back and forth five times, putting on an additional green item each time, wins. Or you can just say whoever puts on the most items in the minute wins.

Print out enough of these roll a rainbow sheets either for everyone who will play to have one or one per team.

To play, players must use one die to try to be the first to “roll a rainbow” by rolling the number on the die associated with a color on the rainbow. You can get full rules and details here.

Buy a little Blarney Stone replica (like this one) or just fill a fish bowl or buckets with small stones and put the bucket on one side of the room.

On the other side of the room, put buckets with colored/numbered ping pong balls or just have people play at different times so you can keep track of whose ball is whose.

To play, players must stand on one side of the room and bounce ping pong balls across the room, trying to land one in the Blarney Stone bucket you set up previously.

First player to land one successfully in the bucket wins.

Before the game, empty a green tissue box for each player and tape a pair of panty hose on it so that you can basically tie the tissue box to your waist.

Players must put 20 green ping pong balls inside of the tissue box then tie the tissue box around their waist. Then as soon as the timer starts, players must shake their hips and do a “shamrock shake” to be the first one to get all of the balls out.

Set one leprechaun and two books on one side of the room and a pot at the other side for the room.

This game is played in teams of two. Players must bat the leprechaun back and forth across the room using only the books to drop it in the pot. If they drop it on their way to the pot or around the pot as they’re trying to drop it in, they must go back to the beginning and try to catch their leprechaun again. If you’re playing with younger kids, feel free to just let them pick it up and start where they dropped it.

First team to successfully land the leprechaun in the pot wins.

Give each player a potato and six water bottles. Players must set up the water bottles in a bowling pin formation (3, 2, 1) on one side of the room.

Players must bowl the potato across the room to knock all of the water bottles over. Getting them over once isn’t too difficult, so players must knock them over a certain number of times or knock over a total number of pins within the time limit.

Fill 10 little Dixie cups per team playing with a non-clear liquid of some sort, Lucky Charms cereal, or something else that says “St. Patrick’s Day.”

On the bottom of one little Dixie cup (per team, so if you have five teams = 5 cups), put a 4-leaf clover sticker. Don’t put anything on the others.

Line all of the cups up in a group on one table before the game.

Players must pick one cup and eat/drink the contents in it then look at the bottom of the cup to see if they found a 4-leaf clover. If they didn’t, they must continue picking and consuming cup contents until they’ve found one.

Tape a large (like 6’x6′) square on the ground. In the middle of the square, place a large pot.

Players must stand outside of the square and attempt to bounce plastic gold coins to land them in the pot.

I recommend using different colored coins for each team playing but if not, just make sure to pay close attention to see whose coin actually lands in the pot.

The first person to land three coins in the pot wins. Players have to remain outside of the square at all times or else their bounces don’t count.

This one also makes a hilarious team relay! Watch the video toward the top of this post to see how funny this one can be!

Fill a large bowl with Lucky Charms and place it on a table. Place a cup full of spoons nearby.

Players have to take a spoon and race to find one of each of the different Lucky Charms by either just using their mouth or using the spoon in their mouth (my preschooler liked to just use his mouth).

First player to find one of each wins.

This one is also really fun as a relay! Have one teammate run down and find a Lucky Charm marshmallow then run back with it on their spoon then the next person goes and continues until the team finds all the marshmallows! Watch the video in this post to see how fun this one can be!

Before the game, print out one funny limerick per team and cut each line of the the limerick so it is on a separate line (making sure to keep each limerick together).

Do this with each of the limericks, making sure to use a different color balloon for each limerick. So when you’re done, you’ll have five balloons (with limerick lines inside) for each team.

Players must blow up and pop the balloons containing their limerick lines. Once they’ve popped all five balloons, they must put the limerick in order.

First team to put their limerick in order wins.

You can’t play games without prizes! Here are some of my favorite St. Patrick’s Day prize ideas although you could totally go more traditional and do something like a gift card to an Irish restaurant or a decorated potato instead! 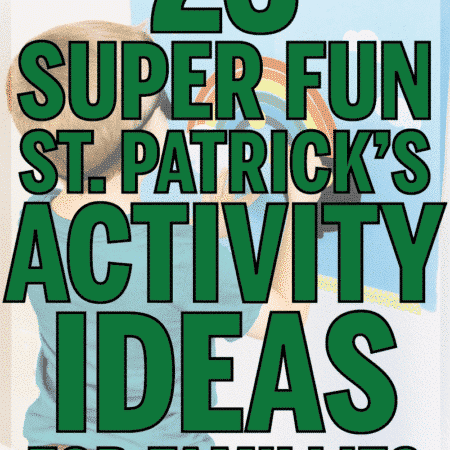