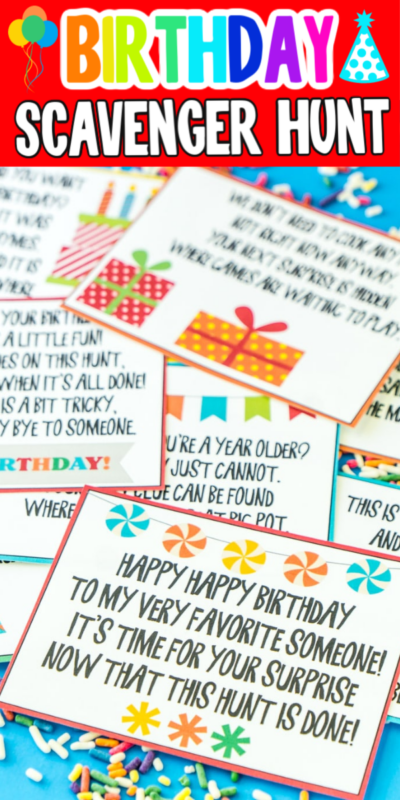 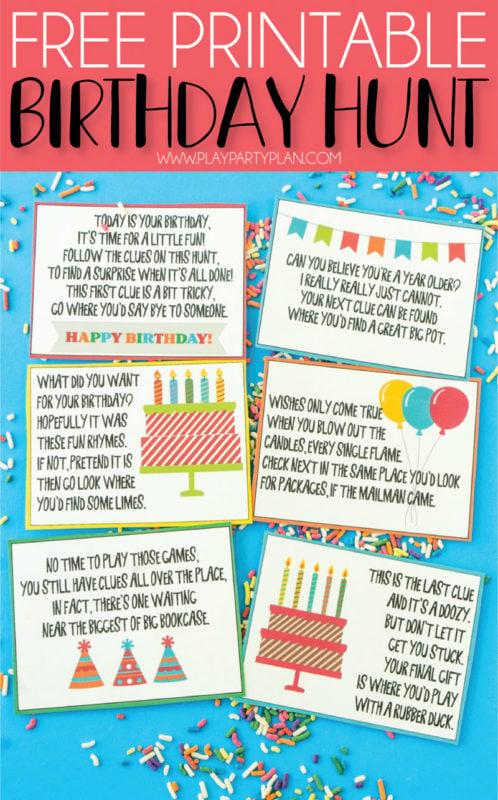 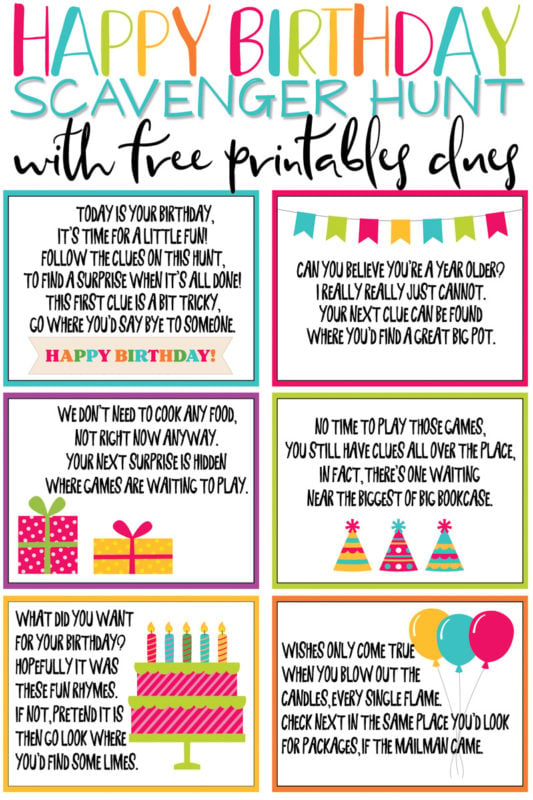 Let me start by saying this is a totally updated birthday scavenger hunt. If you’re looking for the old one from Pinterest (seen in the image immediately below), you can still get it.

Simply download the file via the “download the printable file” box at the bottom of this post, and there will be a link in the email you receive to the old one.

I made that original birthday scavenger hunt years ago. Since then I’ve created over 25 different scavenger hunts for all sorts of occasions. If there’s one missing from this list of scavenger hunts, let me know and I’ll add it to my to-do list! 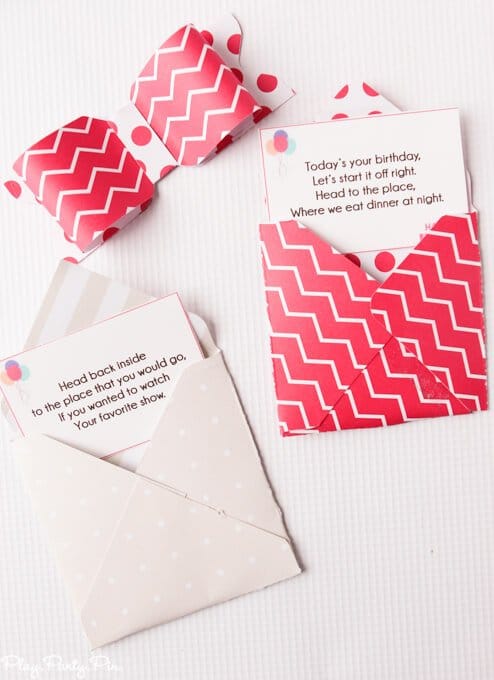 That being said, I’ve made a brand new birthday scavenger hunt, and I think it’s even better than the original! That’s the one this post talks about now.

And one other change – you can add surprises to this one along the way if you want but don’t have to, the clues don’t necessarily indicate there are certain things along the hunt like the old one did. 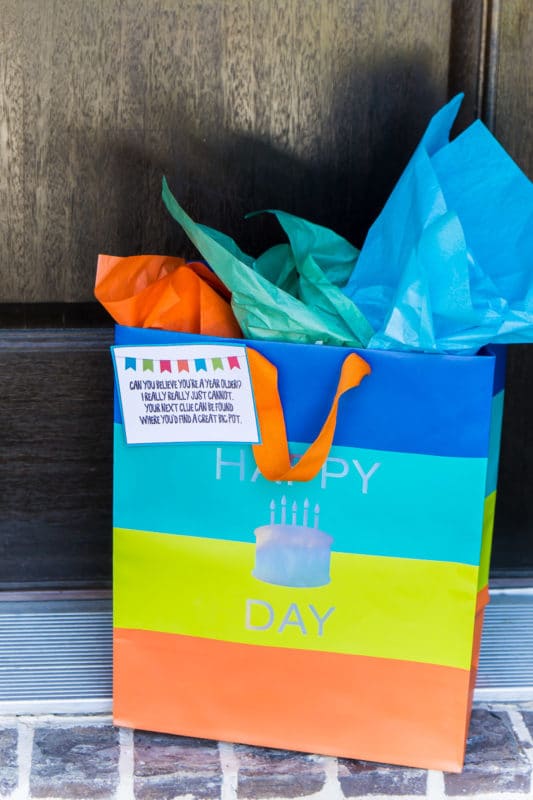 Since this week is my son’s seventh birthday (ahhhh, where has the time gone since my life was changed forever seven years ago??) and he’s obsessed with all scavenger hunt ideas, I thought it’d be fun to make a brand new birthday scavenger hunt. We’ll be doing this and this virtual scavenger hunt with family and friends!

These birthday scavenger hunt clues included in the free printable are similar to ones I’ve made for previous hunts. A few things to note that make this scavenger hunt good for anyone.

The clues are generic enough that they should work at anyone’s house (e.g., fridge, mailbox, front door). I used to do more specific things around our house (e.g., fireplace) but found that not everyone could use them because their house didn’t have a fireplace. 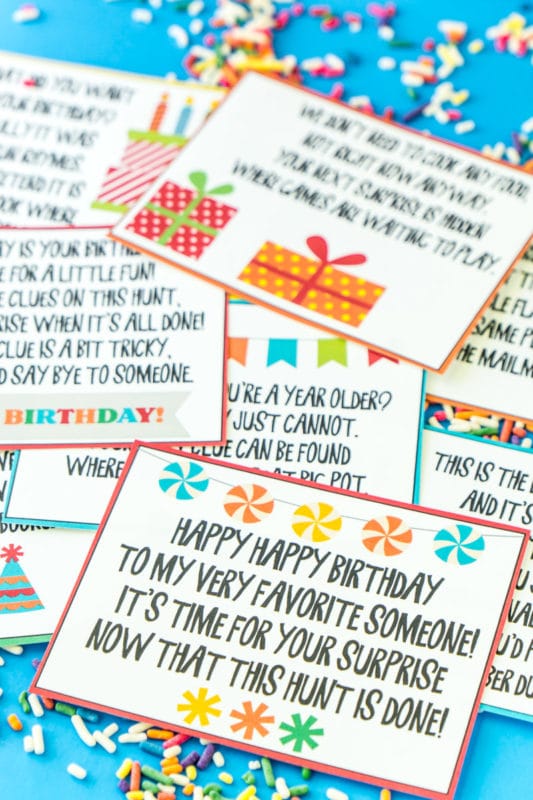 I’ve created both a boy and a girl colored version – so if you have a red loving boy like I do, you can use the boy colored one. Both are included (along with the old birthday scavenger hunt clues) in the printable file.

They’re also generic enough that they’d work for kids or adults. I’ve done things like this with my husband before, and he absolutely loved it! And I know I’ve always been a sucker for my family’s annual Christmas scavenger hunt!

There are eight total clues including the starting clue and the finishing note. You can use all eight or skip around if you’d rather do less.

You can use this birthday scavenger hunt in a couple of different ways. You could set it up overnight and leave your loved one the first clue to find when they wake up (kind of like filling their room with balloons).

You could give them the clue when they get home from school/work (that’s what we did) and set it up while they’re out of the house.

Or you could do this at a birthday party for kids and have them all hunt together. This would be perfect to get them a bit more active after playing these birthday party games! 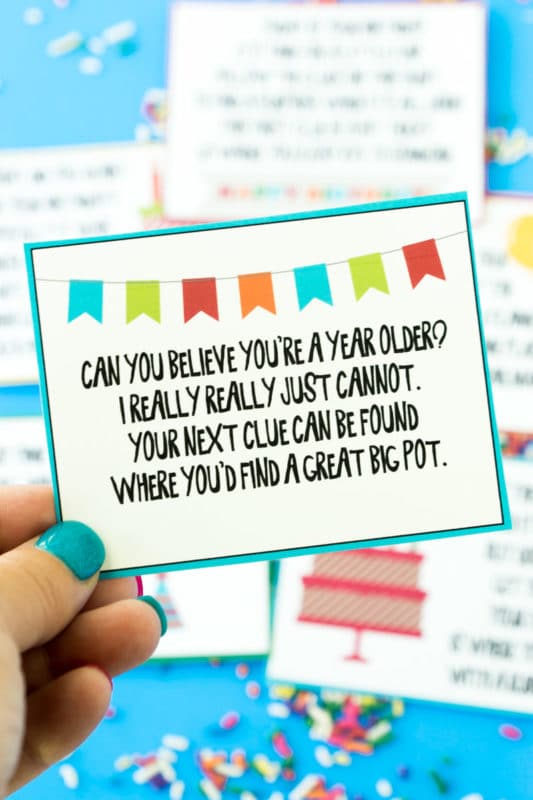 How to Setup a Birthday Scavenger Hunt

First things first, you need to print and cut out the printable clues. The PDF comes with four pages – one set of boy clues and one set of girl clues. Mix and match if you’d like but know the two sets of clues are identical other than colors.

As you’re printing and cutting out the cards, I highly recommend keeping them in the order (right to left and top to bottom) that they’re printed in.

I promise that says mailbox, even if you can’t actually read it. 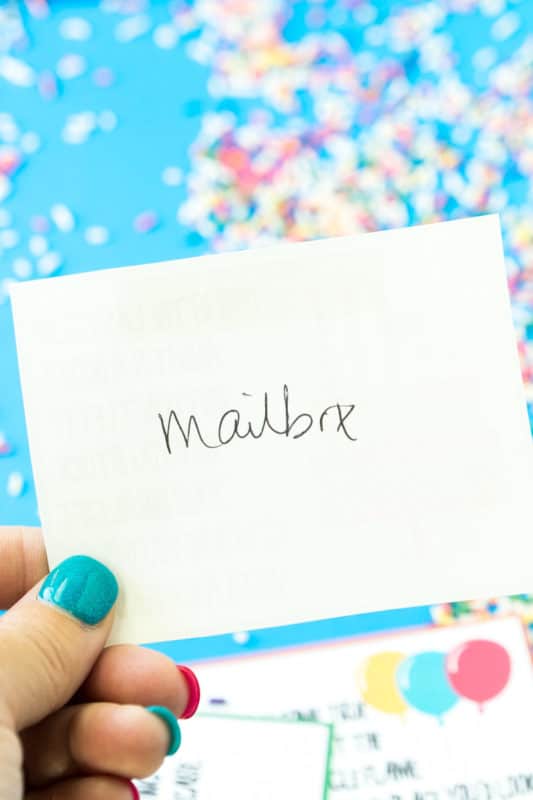 Adding something on the back is super helpful for when you’re actually setting up the scavenger hunt, especially if the cards get out of order.

Also, make sure to set aside the first clue – you’ll give this to the birthday person!

Once the clues are cut out, you have a decision to make. Are you going to do one surprise at the end of the scavenger hunt or gifts along the way?

We decided it would be a fun way to give my son his gifts, so we put scavenger hunt clues on the gifts and hid them along the hunt.

Now we didn’t open anything until the end – but it added an element of fun and surprise to see what kind of present was waiting him with his next clue.

You can totally skip the gifts and just do something at the end as well, especially if you’re doing this for a bigger group of kids. Totally up to you!

Once you’ve made that decision, it’s time to hide the clues (and/or gifts). 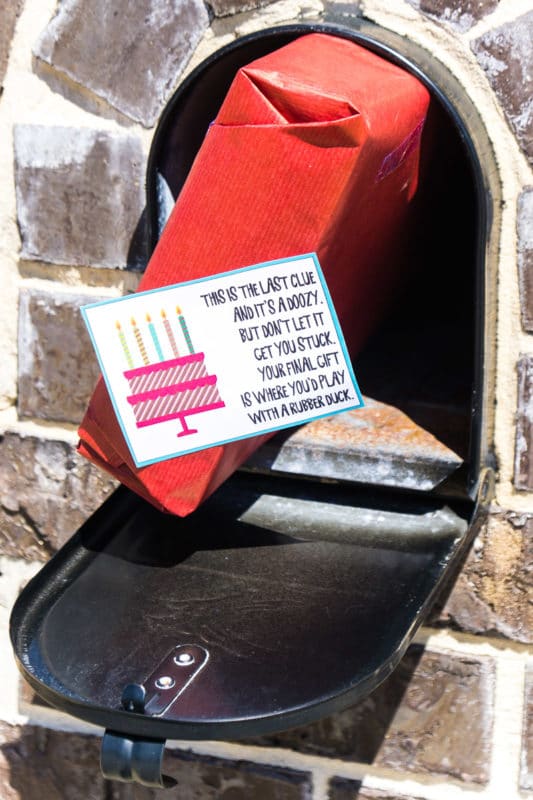 Hide the next clue wherever the first clue leads (I believe it’s right outside the front door). Then hide the third clue where the second clue leads (pot + pans cupboard). And so on.

Continue hiding the clues until you get to the final happy birthday note – put that with the final surprise or gift in the final destination (bathtub).

All that’s left is to give the birthday honoree the first clue and let the fun begin! 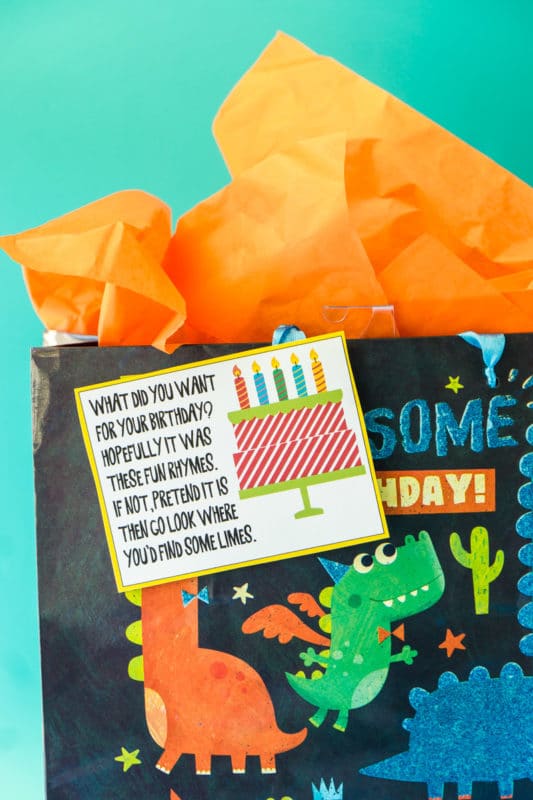 Watch the video below (or in the sidebar if you’re on desktop) to see how fun and easy this birthday scavenger hunt is!

Enter your first name and email address in the form below to get the free printable. You’ll be immediately taken to the PDF to download and receive a copy to your email shortly after. If you can’t see the form below, click here to get to the form to enter your info.

No matter what age you’re planning a birthday for, I’ve got some other great ideas that both kids and adults will love!

Don’t forget to pin this birthday scavenger hunt for later! 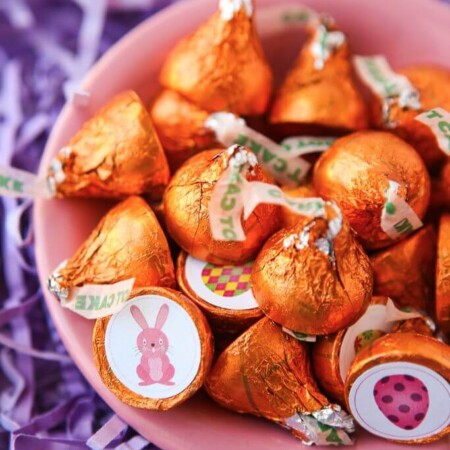 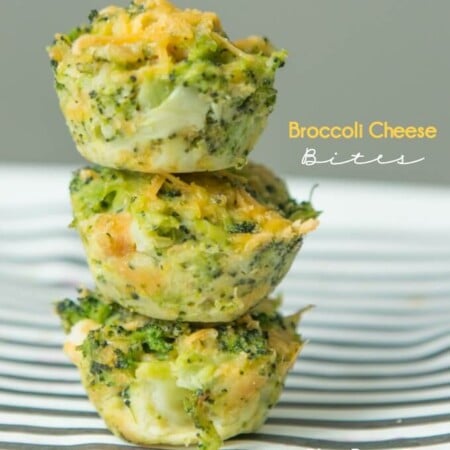