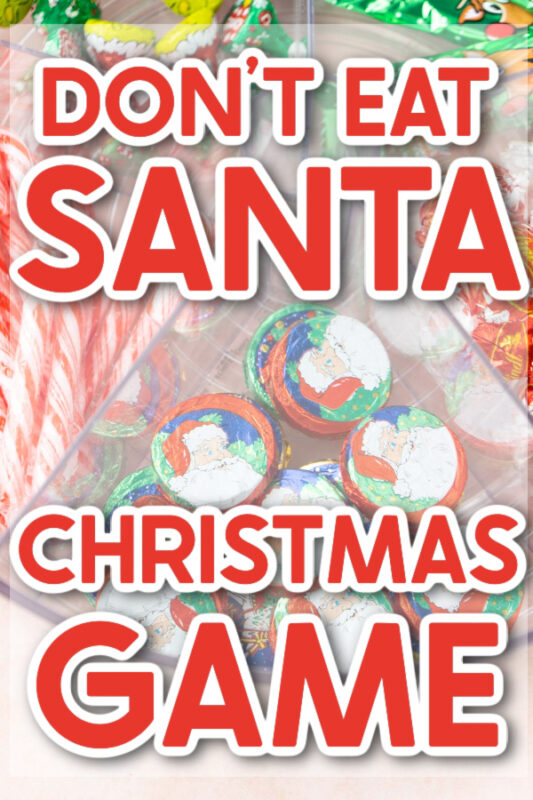 This fun don’t eat Santa Christmas game has players pressing their luck to try to be the final one standing while still winning lots of yummy treats or goodies! There are variations for every age and every type of holiday party so don’t get playing and make sure to not eat Santa!

Every year when Christmas rolls around, I somehow get stuck in charge of planning Christmas party games.

At this point, I’ve come up with over 40 different Christmas games, but I just don’t feel like I can play the same one year after year.

Last year we did the saran wrap game and Scrooge your neighbor. The year before it was my viral dice gift exchange.

This year I’ve had Grinch party ideas in my head and did this Grinch gift exchange but wanted to do something non-Grinch related too.

I’ve included variations of this game for different ages, different group sizes, and different group types. I recommend reading through the entire post to figure out which way of playing will work best for you.

What is Don’t Eat Santa

Let me start by giving you a basic explanation of the game. The basic idea is a press your luck (no whammies!) type game, less press your luck for kids and more for adults.

You spin and whatever it lands on, you get to keep that. But if you ever spin a Santa, that’s the end of the line in one way or another.

The goal is to be the last person standing at the end of the game because that person is the big winner.

So you got that? The objective is to win as much as possible during the game without landing on a Santa. The last person standing who hasn’t landed on a Santa wins big!

There are just a few things you’ll need to play no matter what age you’re playing this with.

That’s all you need!

Start by setting up your game wheel. To do this, all you have to do is put a different type of prize in all of the lazy Susan dividers other than one.

The amount that goes into each doesn’t matter, but I do recommend having quite a few for each, so they don’t run out super quick. I went with about 20 of each for a group of 10 people.

If you’re doing bigger prizes for fun adult games , you can definitely have fewer of each since they’ll likely be more higher value items.

In the remaining spot you’re going to put the Santa candies. You’ll need one per person playing the game since they’ll get to take the candy with them to eat when they land on this spot.

Make sure you have your larger gift ready and then hand out a goodie bag, cup, or whatever people are going to collect their earnings in to each of the people playing.

And that’s it, you’re ready to play!

How to Play Don’t Eat Santa

I’ve included a number of variations of how to play this game below along with the age or occasion I would recommend it for. Those are totally subjective – you can play with any of these variations with any group. You know your people best.

And please make sure to read all the way through these instructions, there are lots of different ways to play this game so if the first doesn’t sound fun to you, maybe another variation will.

How to Play with Teens and Adults

Okay so I’ve lumped teens and adults into one group but you know your group best – the group of teens you’re dealing with may just be best playing the kids version.

If you’re playing this with adults, this is a really fun prize game, kind of like this Christmas punch game. There are two ways you can play this game.

This is my personal favorite way to play this game. Instead of loading up your spinner with candy, load all but one of the spinner slots with prizes, the last one still needs Santa candies.

You can still do inexpensive things but make them worth going after or else the game doesn’t really work. Here are a few options I’ve used before:

The one thing to note is that I recommend making sure the items are different if you’re doing something like socks or lip balms so that if someone does spin one multiple times, they don’t mind getting the same something.

Give everyone their goodie bag then have everyone take a random number to figure out their order.

The first person comes up with their cup and spins the spinner. If it lands on a prize, they can add it to their goodie bag. They shouldn’t open anything or do anything with it because those goodie bags aren’t safe until they choose to leave the game.

If they land on Santa, they’re out of the game – better luck next time.

The second person would then come up and do the same thing, continuing through the entire line of people. Anyone who won a prize puts it in their bag, anyone who landed on Santa is out.

The second round changes slightly. Before spinning the spinner, players can choose whether or not they want to press their luck and spin OR if they want to leave the game with the goodies they have already collected. If they leave the game, they keep everything in their bag.

If they choose to spin, they’re risking everything in their bag. If they land on Santa, they’re not only out, they lose everything they’ve already collected. They do get to take a Santa with them to eat as a consolation prize.

The only way to walk away with prizes is to either walk away before the game is over or avoid hitting Santa.

Keep playing until you get down to just two people left, even if those people are just the final two by default (the people ahead of them in line spun a Santa).

Down to Two People?

Once it gets down to two people left in the game, if both people want to continue to play and risk their goodies, they both place their cups on the table next to a divider. Spin and if they win a prize, they get to put it in their bag and then have the choice of whether or not they want to walk away and let the other person win.

As long as two players remain, keep spinning with both people’s cups on the board. If at any point one gets hit by a Santa, that person loses everything and the other person is the big winner. They keep everything they’ve won so far plus they get the big prize!

Option 2: Win It All

The second option if you want to make this more about giving people prizes than pressing their luck is to play the game the exact same way as above except people don’t have to risk their goodies to spin again.

So they would spin, win (or get a Santa and be out), and then go to the back of the line. Keep spinning and winning something until you spin a Santa and get out.

This is definitely not as suspenseful, but it’s kind of like this lucky last line gift game where it’s just a fun way to give people gifts and goodies!

How to Play with Kids

If you’re playing with kids, you can totally do one of the above options if you think they’re up for it, or there are three other ways you can play this game.

Option 1: One Player at Time

One option is if you have a smaller group of kids, have one player come up at a time, put their cup on the table by the lazy Susan, and give it a good spin.

Whichever divider ends up closest to the cup is what they spin. If it’s a non-Santa treat, they take one out of the spinner and put it in their cup to keep. There’s no giving candy back in this variation – they keep anything they win.

If it’s a Santa, they don’t win anything and they go to the back of the line. Next person spins and takes their chance to win.

Instead of anyone getting out, play with kids for a certain amount of time and just keep rotating through who is spinning to win. This is more of a carnival game style play than a press your luck type game but should keep kids happy winning treats and getting to spin!

Option 2: One Player Per Divider

The second option is to do the exact same thing as above but instead of having one person putting their cup and standing around the spinner, you have one kid per divider playing. Everyone put their cups up (label them with names!), one person spins (take turns), and whichever treat lands nearest to yours get to put one of those in their cup.

The person whose cup lands closest to Santa just doesn’t get a treat that round.

Everyone goes to the back of the line and the next set of kids go up and play. Keep playing for a set amount of time, again just like a carnival game where it’s just a fun way to win prizes.

The last way to play this game for kids is if you think they can handle getting out like you would in this musical gifts game.

Play exactly the same way as the options above (either one player or one player per divider) but instead of not getting a candy when you land on Santa, you’re out of the game.

The last person standing wins the larger prize I mentioned in the supply list.

What happens if one of the dividers runs out of goodies?

If one of the dividers runs out, that’s just a too bad space. If someone spins it, they’re not out, but they don’t win anything extra for their prize pile. They do not get to spin again.

What happens to all of the leftover goodies at the end?

You can do what you want with them – divide them up and hand them out to players if you want, keep them yourself, totally up to you!

How many spins does everyone take?

Everyone only takes one spin per round. Each round you decide if you’re going to spin again and risk your prizes or walk away and leave the game.

If you like this don’t eat Santa game, make sure to check out these other fun Christmas games!

I know sometimes it’s easier to have a printable version of my game instructions. If you’d like a PDF to print out with the instructions to use for playing, you can click the button below to download. 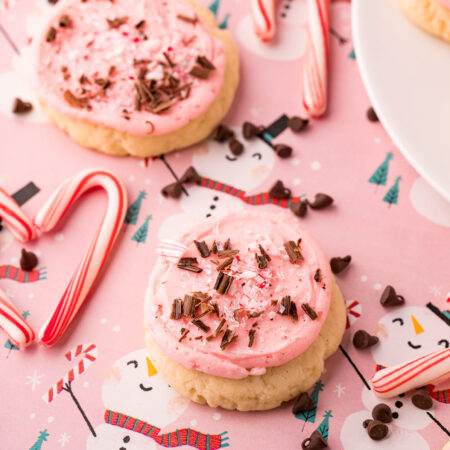