You never know what’s going to happen in this switch, steal, unwrap gift exchange game, which is why it’ll quickly become one of your favorite Christmas party games this year! No gift is safe until after the last dice are rolled and even then, you just never know! This will become a family favorite replacing the traditional white elephant game year after year! 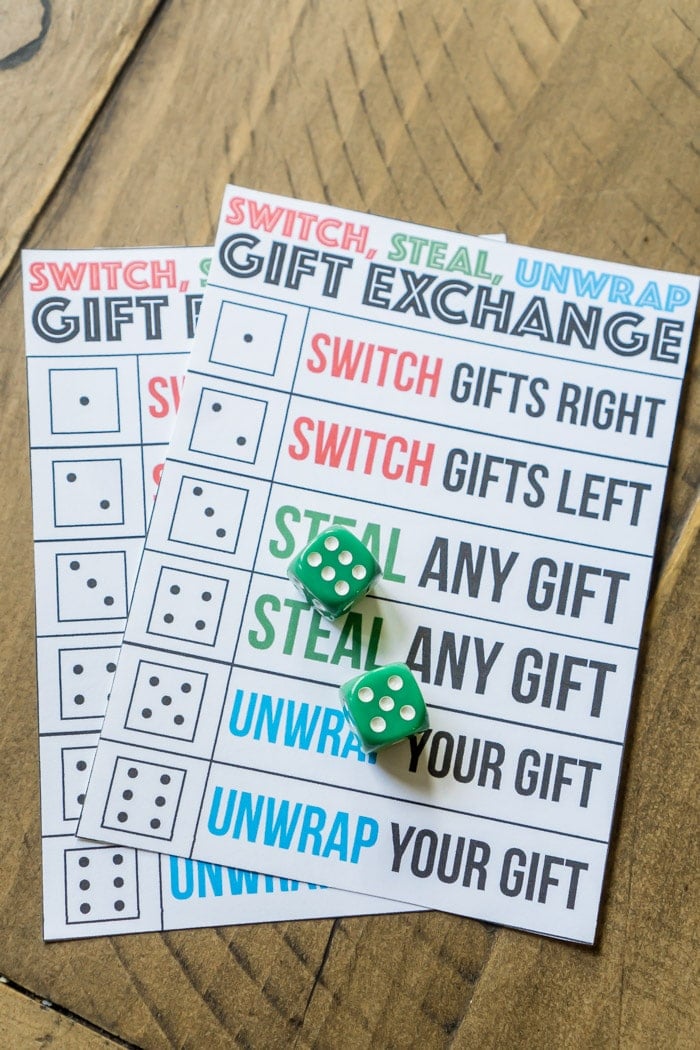 I’ll be the first to admit it, this is basically a Christmas gift exchange rendition of my super popular left, right, eat game I shared in this birthday party games post. That one has been so popular with readers and my own family that I decided to switch things up this year with a similar gift exchange game!

I love that it’s simple enough for kids to play but fun enough for teens and adults!

The general idea of the game is this – everyone brings a gift (or multiple gifts) and the gifts get passed around the table based on the roll of the dice until all gifts get unwrapped. As soon as all gifts are unwrapped the game is over and everyone goes home with whatever gifts they ended up with.

But it’s way more than that! Watch the video below to see a quick version of how to play AND to see how fun this gift exchange dice game really is! 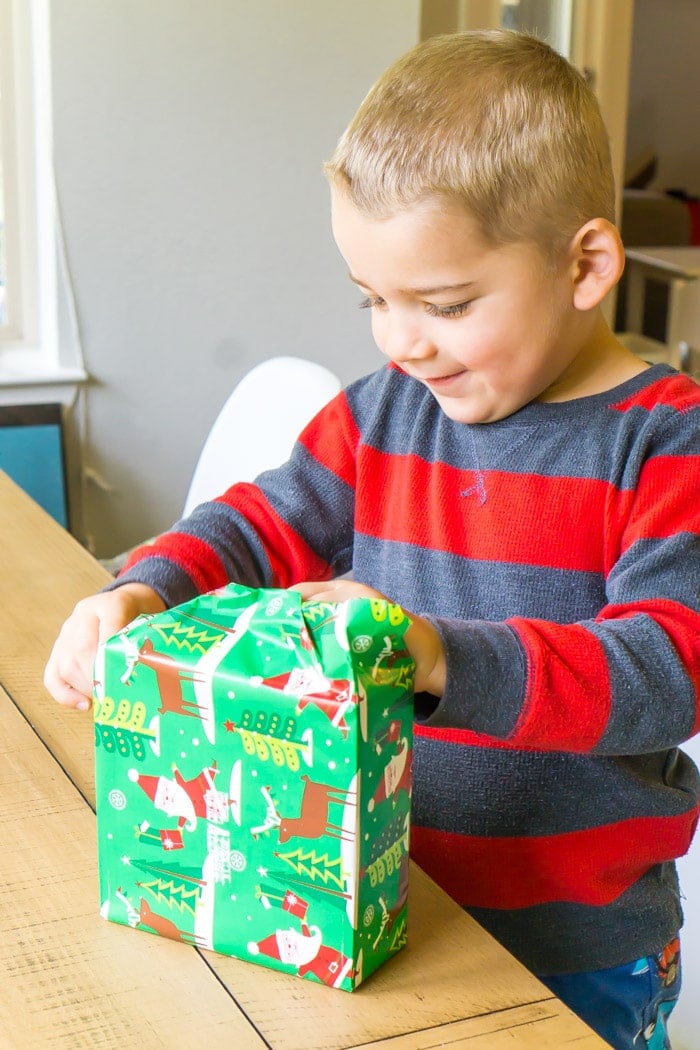 Before you are going to play, you have a decision to make. You can either have people bring one, two, or three gifts each.

If you do two or three, just specify that they should be smaller price items within a price range of say $15 for all three gifts. If they’re just bringing one gift, just set your price range wherever you want it.

This is more fun with multiple gifts but that doesn’t mean it doesn’t still work well with one or two. I’ve included instructions below for playing it with just one gift or multiples.

When you ask your guests to bring gifts, make sure they know to bring them wrapped. This game only works if the gifts are wrapped.

When guests arrive, they should put their gifts in a pile on a table or on the floor, wherever works best for you. You can also decide what type of gifts you want people to bring – white elephant or regular. I prefer regular for this game and white elephant for this heads or tails gift exchange game but again, do what’s best for your group! If you need white elephant gift ideas, here’s a huge list!

How to Start the Game

Have everyone put their gifts in a pile in the middle. Before you start playing, have everyone just randomly pick out one (or 2 or 3) gift from the center then sit down in the circle. These are the gifts they’ll start with.

Alternately, you could have whoever is hosting the game just hand out all the gifts randomly until everyone has the correct number of gifts. Everyone should start with the same number of gifts and will end with that same number. 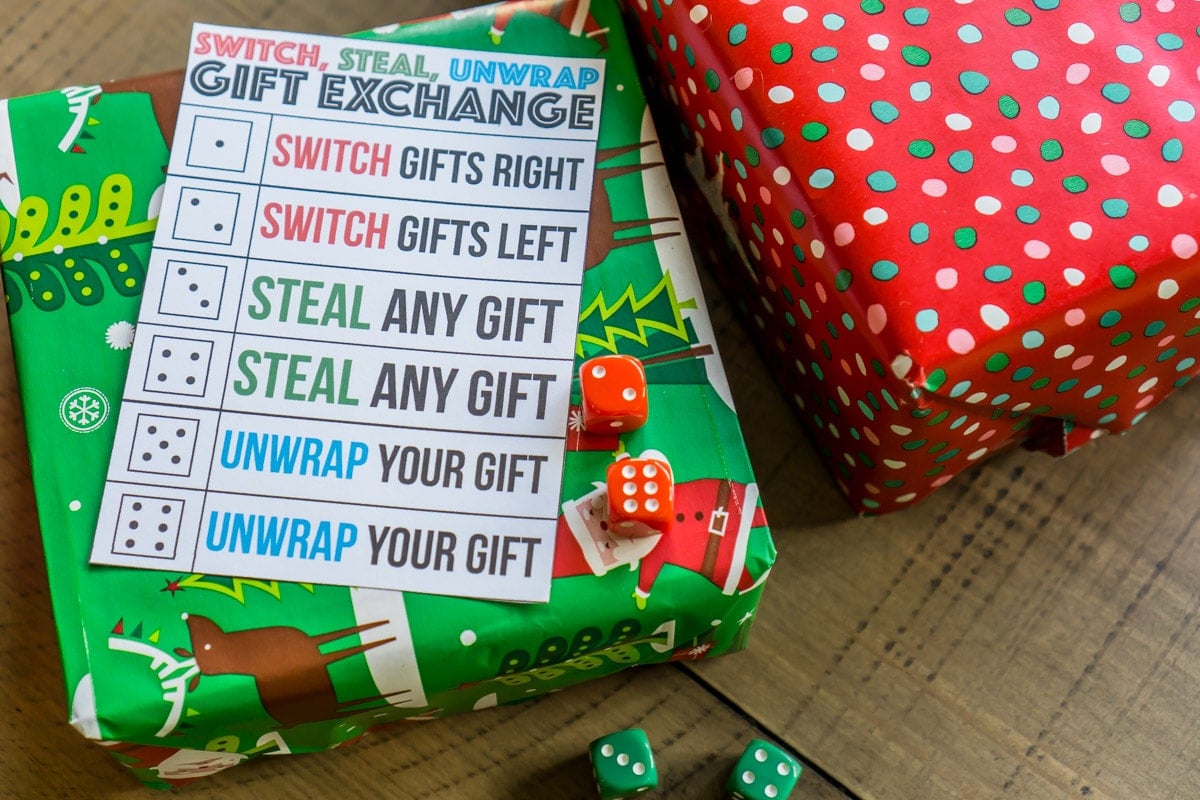 How to Play the Game

Choose someone to start the game and give them the dice. If you are playing with one gift per person, give them one die. Two gifts = two dice. Three gifts = three dice.

They roll the appropriate number of dice and take action based on what they roll. Each die corresponds with one of the gifts in their pile. The person who is rolling the dice gets to choose which gifts to swap and steal. 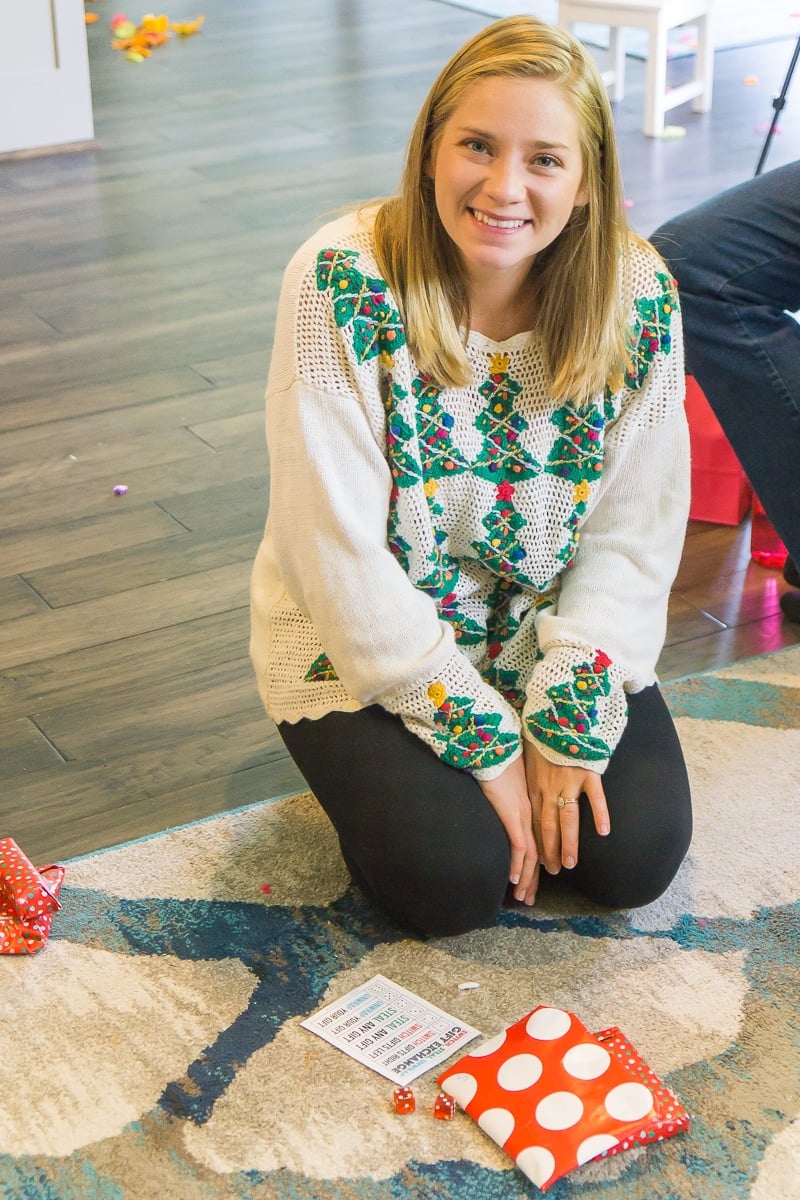 If someone cannot complete the action on the dice (e.g., they roll two 6’s and all of their gifts are already unwrapped) their turn is over. Better luck next time.

Once the player has completed all of their actions, they hand the dice to the person on their left and it’s now that person’s turn. 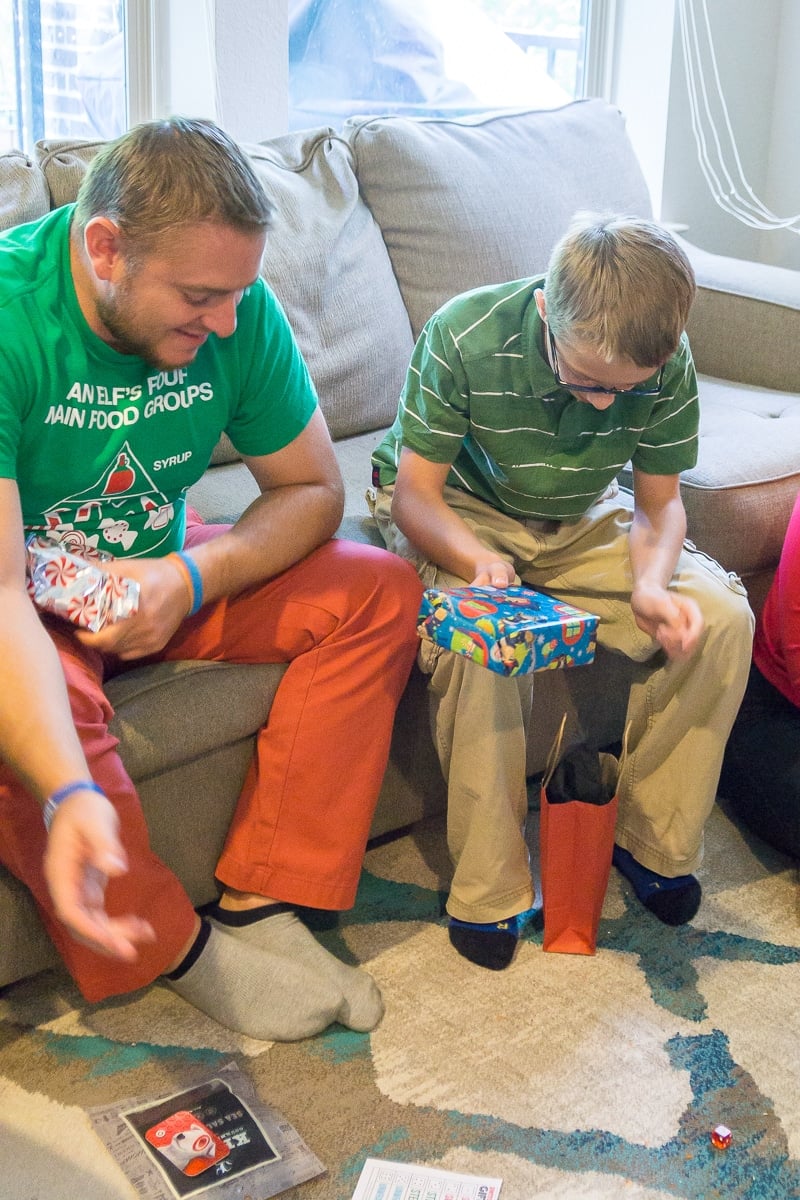 Note: The player must take action on the gifts they have in their possession at the time of the roll, not ones they’ve swapped or switched for after their roll. So if player A swapped a gift with a player on their right, they can’t also use that gift as the one they want to unwrap.

The game ends as soon as the final gift is unwrapped and everyone keeps the gifts they have in hand. If someone ends up with their own gift, they can either trade if they want or just keep it.

This is one of the most fun parts of the game because you never know when the last gift is going to be unwrapped and there’s always a possibility of your gift being switched until that final gift is unwrapped.

If you’d prefer, you could do one more roll for everyone after the final gift is unwrapped, including the person who unwrapped the last gift. This will add a bit more time to your game and the unwrapping of the last gift isn’t quite as suspenseful, but totally up to you!

Whatever you decide, make sure everyone know ahead of time so you don’t have any confusion or complaining. 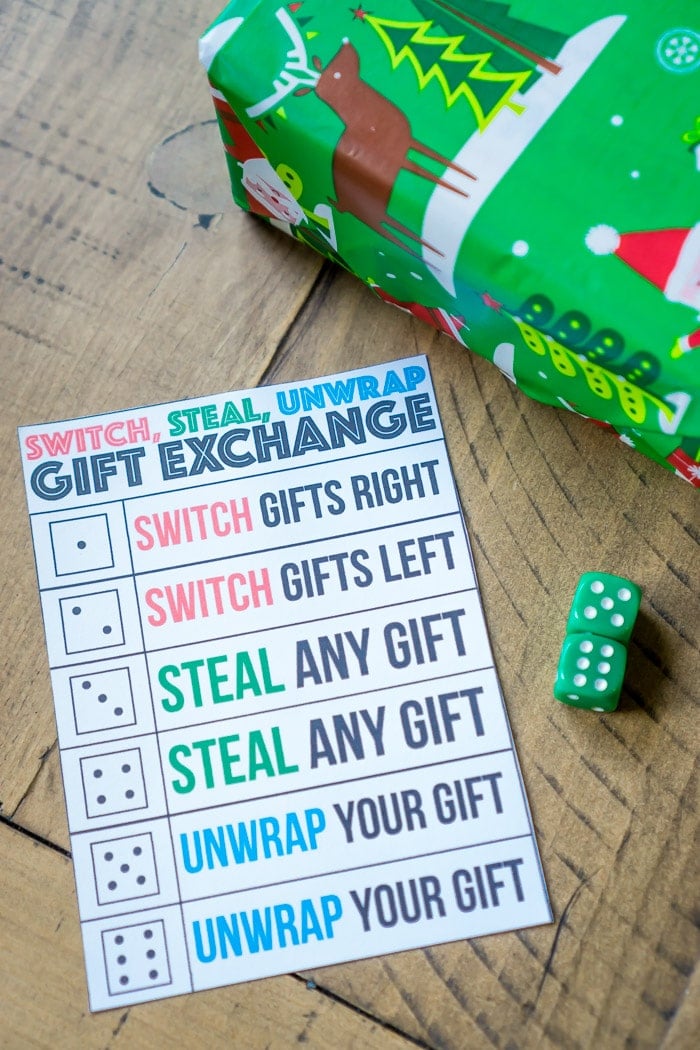 If you have people bring two gifts, the game will be the exact same except everyone will only roll two dice instead of three. And the game will likely be quite a bit shorter.

If you have people only bring one gift, the game will work the same way except they’ll only be rolling one die instead of two or three. A couple of reasons it’s more fun with multiple gifts instead of one:

If you’re set on playing this game with the entire group, here are some changes we made to speed up the game and keep everyone interested.

You also want to make sure that you’re all in a circle so people can see what others are opening and have. I saw one set up where they had groups at like 3 different tables (not connected) playing the same game and no one knew what anyone else had because they couldn’t see. I would just do small table games if that’s the case.

Print out a handful of the printable dice rolling cards before the party as well. It’s best to have one per two people, and they come four to a sheet. Do the math and print out as many as you need for all of your guests and if you want to save money, feel free to print in black and white. The colors really don’t matter to the game!

Or you could also just get one of these cards printed out on a poster and hang it up so everyone can see it! 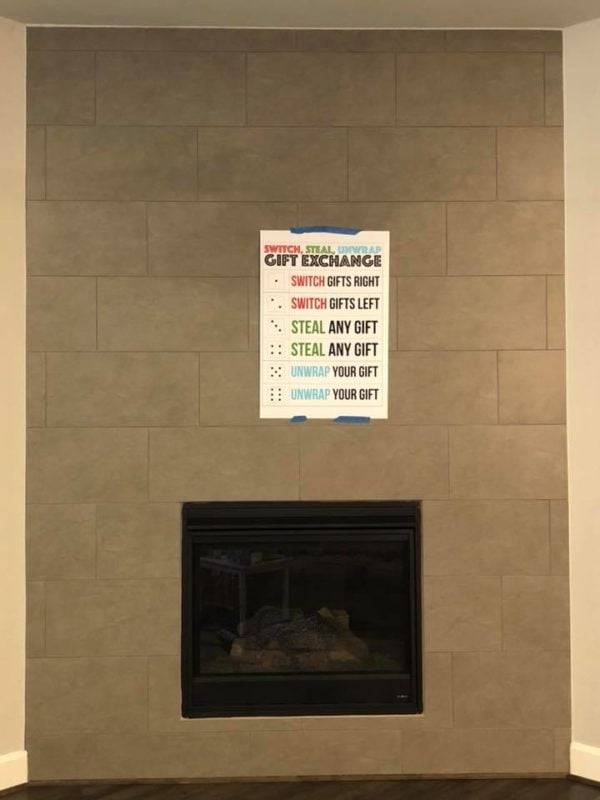 These cards are really only necessary at the beginning of the game, once people get the hang of it, they’ll know exactly how it works. Enter your name and email into the form below to get the free printable cards – blank and filled in versions! If you don’t see the get the printable form, click here to get to it.

I’ve heard from a number of people that they love the game but might want to change up one or two of the options on the card. To keep it easy for everyone, I’ve also created a blank version of the card that has the name of the game and the dice – you fill in the actions that work best for your group.

When you download the cards, you’ll get two files – one that’s filled in with actions and one that has blank spaces next to the numbers. Use whichever works best for you! 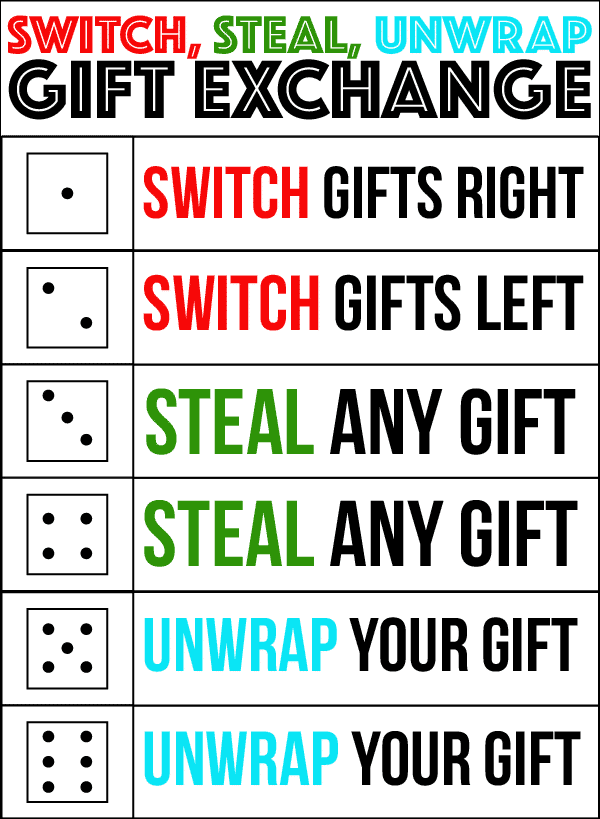 That’s really all there is to this fun gift exchange game. Have questions that aren’t answered below? Feel free to leave comments, and I’ll do my best to answer!

Once a gift is unwrapped, is the gift out of play? Can someone steal an unwrapped gift?

All gifts remain in play throughout the game whether they’re wrapped or unwrapped. Unwrapping them just adds more fun to the game because people then know what they’re stealing/swapping.

If someone rolls something other than a 5 or a 6  (the numbers for unwrapping), do they open their gift?

Yes, and no. If someone rolls a 1 or a 2, they just swap their gift but do not open. If they roll a 3 or a 4, numbers for stealing – they choose a gift to swap from anyone in the circle and unwrap that gift if it’s not already unwrapped. If you wan to make the game go longer, you could take out the unwrapping part, but I’ve found this helps keep the game moving.

Does everyone swap their gift when someone rolls a 1 or a 2?

No, only the person whose turn it is will switch their gift. If you’d like a game where everyone follows the rules of the dice, try this December dice game.

What happens if someone rolls a 5 or a 6 and their gift is already unwrapped?

Bad luck. They pass on the dice and it’s someone else’s turn.

Everyone starts and ends up with the same number of gifts – whatever number you determine to play. If everyone starts with three gifts, they will end with three gifts. Stealing really just means switching with anyone in the circle, not actually stealing a gift. They have to exchange their gift with whoever they choose to steal from.

Do you have to do what the dice says even if you want to keep your gift?

Can this game be played with a large group of people?

Yes, however the biggest group I recommend playing with is about 20-25 people. If you have many more than that, I’d recommend breaking it into two smaller groups. And definitely read the instructions for large groups in this post! 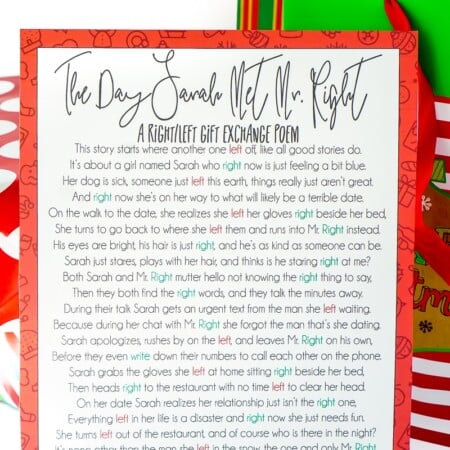 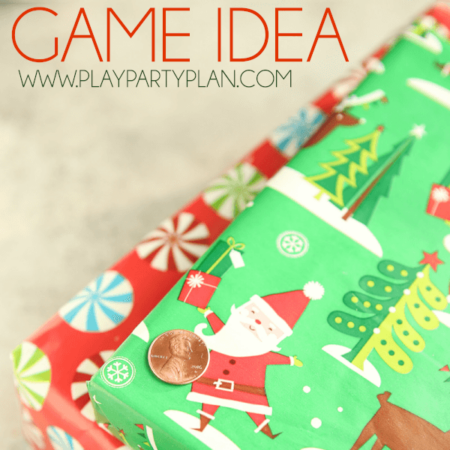