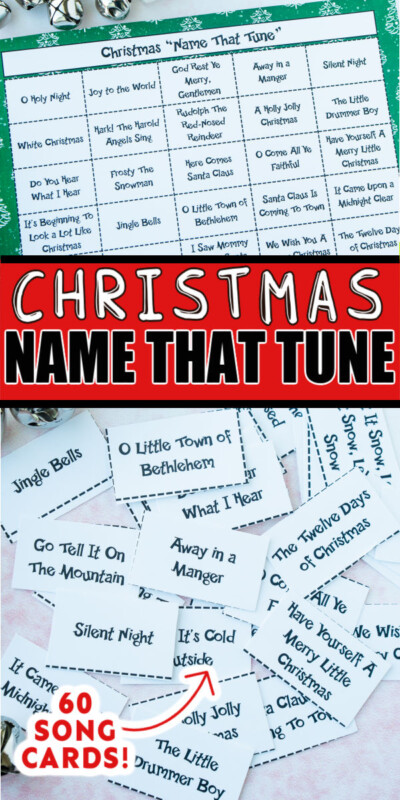 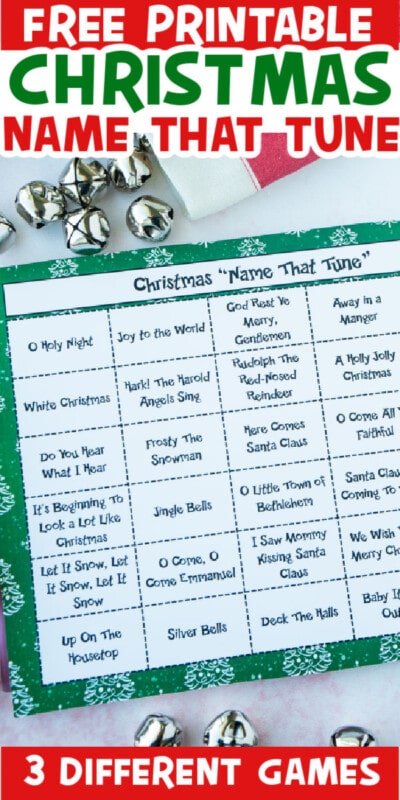 How well do you know Christmas songs? These fun Christmas name that tune games will have your entire group laughing as you try to guess the Christmas song playing, singing, or being ho hoed.

The way we always played name that tune was playing songs and then whoever guessed the song first won a point for their team. It’s so fun but can be a bit tricky for people who don’t necessarily know song names, artists, or just can’t yell things out that fast.

So for a new addition to this year’s Christmas party games, I’ve come up with three different Christmas name that tune game ideas so there’s something for everyone who loves music!

The beauty of this game is that you really only need five things:

Okay so I mentioned it already, but Ive included three different ways to play Christmas Name That Tune below. Each is a bit different so make sure to read through all of them to choose which is right for your group!

This traditional name that tune game is just what I explained above – playing songs and whoever guesses them first earns points for their team!

All you need to do for this game is to split into two (or more) even teams. Make a playlist of the best Christmas songs. Play each song one at a time to the group and whoever can guess the song and/artist first gets a point for their team.

We typically play that you get two points for the artist and one point for the song but you can really score it however you want. We always like to play that if you guess a song, you can’t guess again until the next song so people don’t just keep guessing.

Keep playing through your entire playlist and the team with the most points at the end wins.

This version of the game is best for a group of people who really like music and will be able to come up with song names and artists just from listening to the songs. This is undoubtedly easier for Christmas songs than a random playlist, like I used for these 50th birthday party games, but still a bit more challenging than the second and third game in this post.

This game uses the name that tune cards at the end of this post and is more like the version of the game you’d see on the Name that Tune game show. There are sixty different songs, all popular ones you’ve heard before or hear on the radio during Christmas time.

Pick one person from each team to come to the front of the room. Have the players together randomly pick out one of the song names from the basket.

Whichever team is going first should say how many words (or you can do hummed notes if you prefer) they’ll need to give to their team to get them to guess the song. So for instance if the song was Rudolph, they might need 2 words (red nose).

The other team then has the opportunity to try and go lower. So if team 1 says two words, team 2 could say 1 word if they think they can get it in one word.

Whenever it gets too low for a team, they say challenge and the other team plays the song.

To play the game, the team member who won the number of words then has to say that many words (can be a phrase, completely separate words, whatever) use to get their team to guess the song name. If their team gets it correct, they get a point. If not, the other team gets a point.

Most points at the end a designated amount of time or after all the cards are gone wins.

So this one is my personal favorite just because it’s so darn funny to watch people sing songs (especially ones they’re not 100% sure of) to ho ho ho ho.

That person should go up to the front of the room and pick a song name out of the bowl. Start a 1 minute timer and when the timer starts, that person must sing the song to try to get their team to guess it BUT they can only sing the song using the words Ho Ho Ho, no other words.

If their team guesses it correctly, they get a point and it moves onto the other team.

Alternatively, you could have the person who guesses it correctly on the team come up and switch places with their teammate and do another song. If you want to do this method, make it a 2-minute timer instead of a 1-minute timer. Teams keep going until the 2-minutes run out and get a point for each song they get correct. No passing.

This is definitely the easiest of the three games and the most family-friendly for everyone! You just need to know general tunes, not actual songs!

Let people skip a song if they have no idea what it is, just make sure to put a limit on the skipping – like one per round.

Use the song cards to keep score. Teams get to keep any they get correct and you can just count up all of the cards at the end of the game to see who got the most.

Choose the most popular renditions of songs if you’re doing the play a song version of name that tune. People are more likely to be familiar with the artists that sing the more popular version than a remake. 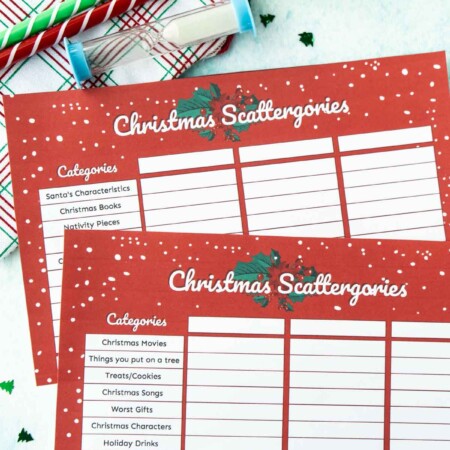 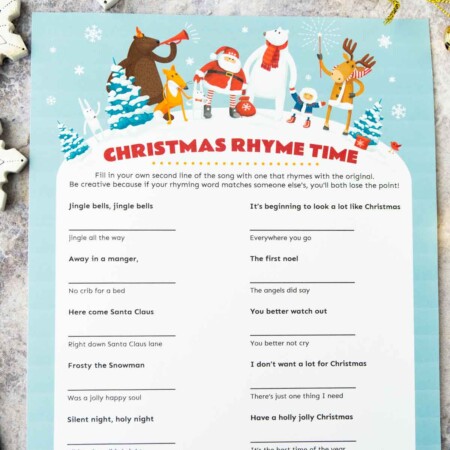