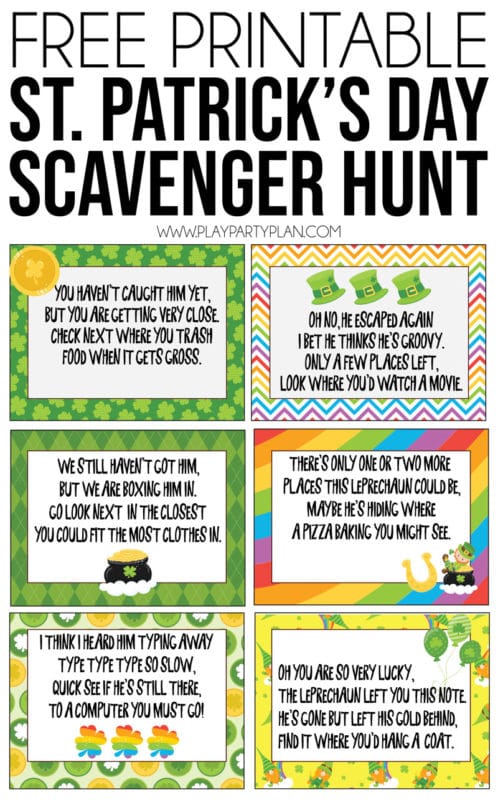 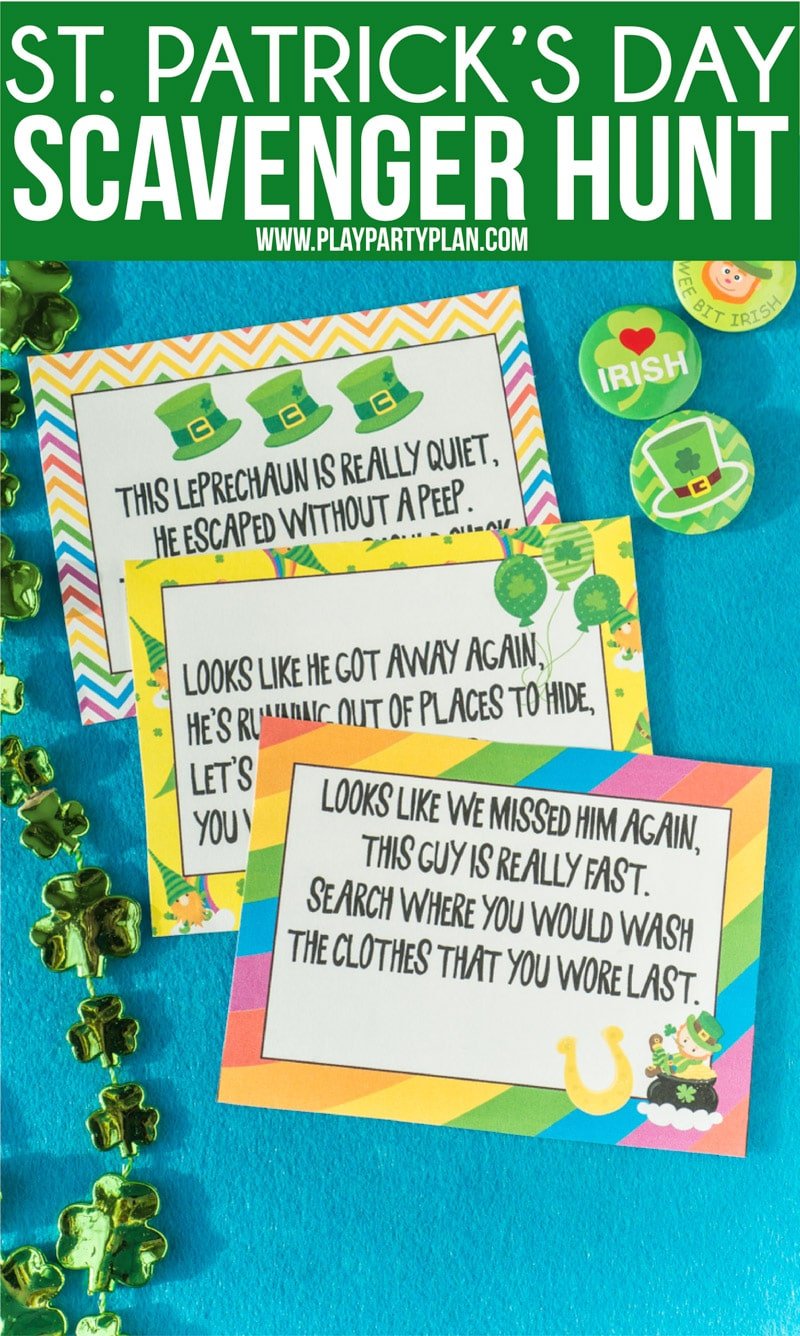 This post contains affiliate links. If you purchase anything via these affiliate links, I may receive a small commission at no additional cost to you.

If there was ever a day to go on a treasure hunt, I feel like St. Patrick’s Day (or talk like a pirate day) is it.

I mean we all know there’s a pot a gold at the end of the rainbow right? In this case, it’s a pot of gold, or whatever treasure you choose, that the leprechaun left behind when he ran away to hide so fast.

This outdoor or indoor scavenger hunt for kids tracks a leprechaun as he jumps from one place to another, trying to avoid the kids on the chase to find him. Will they ever find him – you have to play to find out! 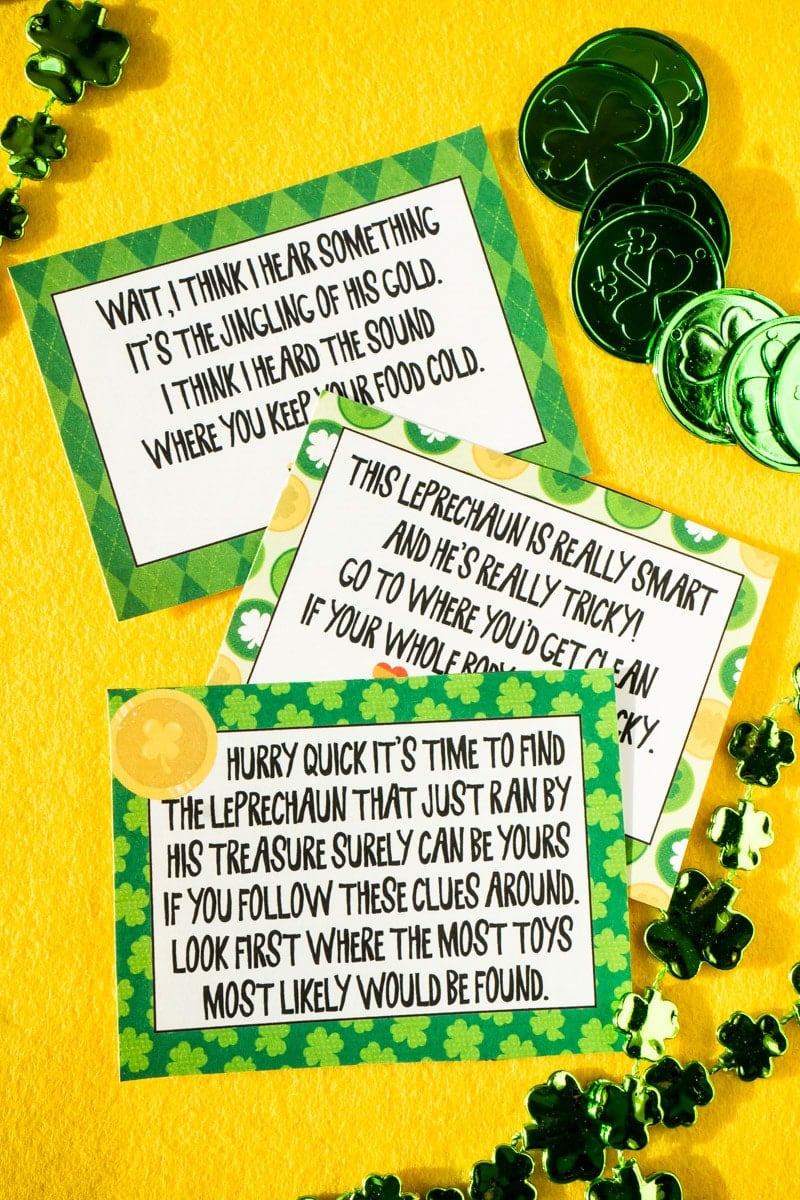 The scavenger hunt PDF comes with twelve different riddles – starting with one telling them how to play and what they’re trying to do (catch the tricky little leprechaun)  and ends with a fun treasure at the end.

I made all of the clues generic enough that they could be used in anyone’s home. And when I say generic, I mean the clues lead to places like an oven, a refrigerator, a door leading outside, etc. They’re not so specific that it could only work in my house (e.g., closet under the stairs, K’s bedroom, craft room).

If you still think these clues might be a little tough to figure out for your kiddos, you have a few choices. Either write your own clues, help them out with the clues, or play one of these St. Patrick’s Day games instead. 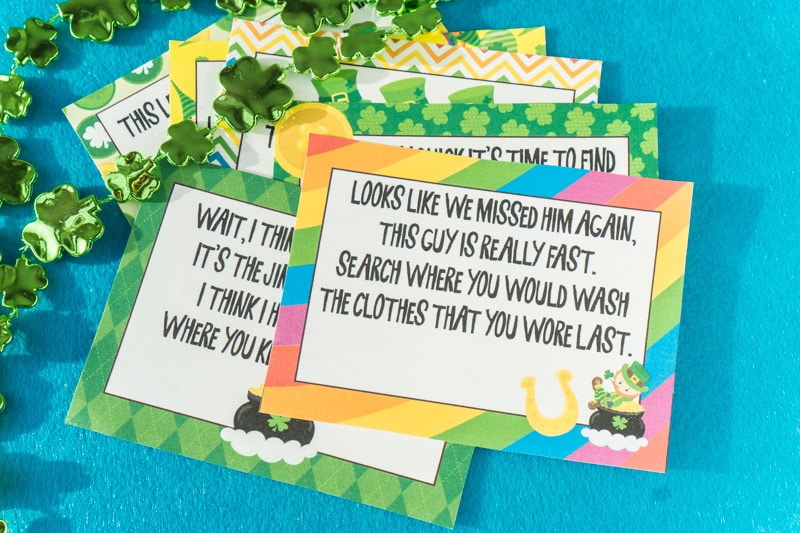 How to Set Up This Scavenger Hunt

The best thing about scavenger hunts is that once the riddles are written for you (they are!), all you have to do really is print out the cards and set up the hunt.

So first things first, print out the downloadable PDF at the bottom of this post. Cut out the cards and keep them in order so that you know where they go. Set the first introduction card aside.

Place the other cards around the house in their designated location – aka wherever the last clue leads on the card. So for instance, if the card says go find the leprechaun in the refrigerator, you would put the NEXT clue in the refrigerator for the kids to find.

If you want, add some little treasure along the way – gold coins, St. Patrick’s Day stickers, these leprechaun footprints – along the way. Then at the end leave a fun treasure, even better if it’s a gold or rainbow themed treasure but whatever you really want to use is great! 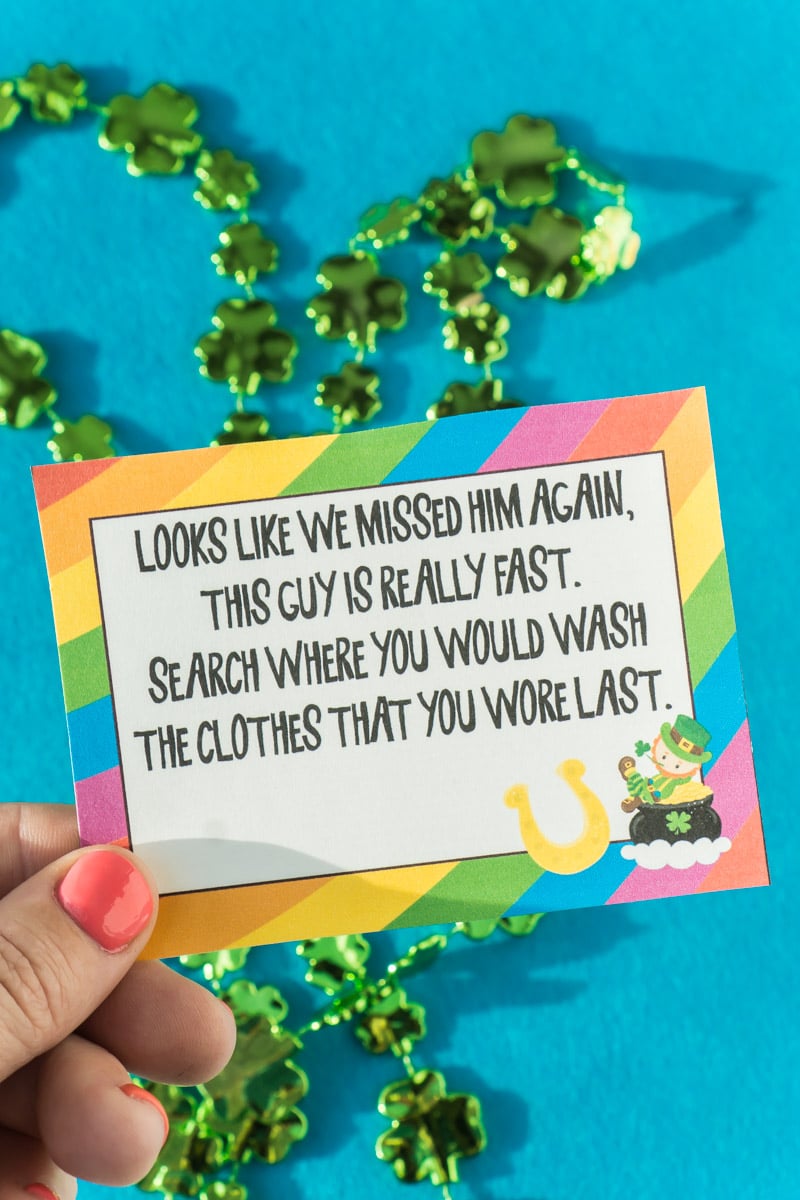 How to Do This Scavenger Hunt

The scavenger hunt is all set up around the house, so now what?

Give your kids the first card and tell them that they have to find the cards in order, following along with the clues. If they see another clue somewhere but it’s not where the last clue led, they can’t grab it or they’ll never find the leprechaun’s treasure at the end.

Once you say go, watch your kids go. I’ve never seen my 5-year-old as excited as he is following scavenger hunt clues around the house. There’s a reason I’ve made scavenger hunt ideas for every holiday!

Here are just a few of my favorite St. Patrick’s Day treasure ideas to put at the end of the hunt! I’ve included a couple of bigger ideas as well as some smaller ones in case, like with this football scavenger hunt, you want to play with a larger group of kids at once! Or you could make it even more challenging and add this roll a rainbow game at the end (to win their prize) instead!

Enter your first name and email address into the form to get the St. Patrick’s Day scavenger hunt. You will be sent directly to the PDF to download and receive an emailed copy to your inbox. If you do not see the form, click here to get to it.

You can either print these on white cardstock or just regular paper – either one is totally fine for the scavenger hunt since you’ll likely be throwing them away afterward. The only caveat is that if you want to stand the cards up, aka lean them against things, instead of using tape – you’ll want to use cardstock. 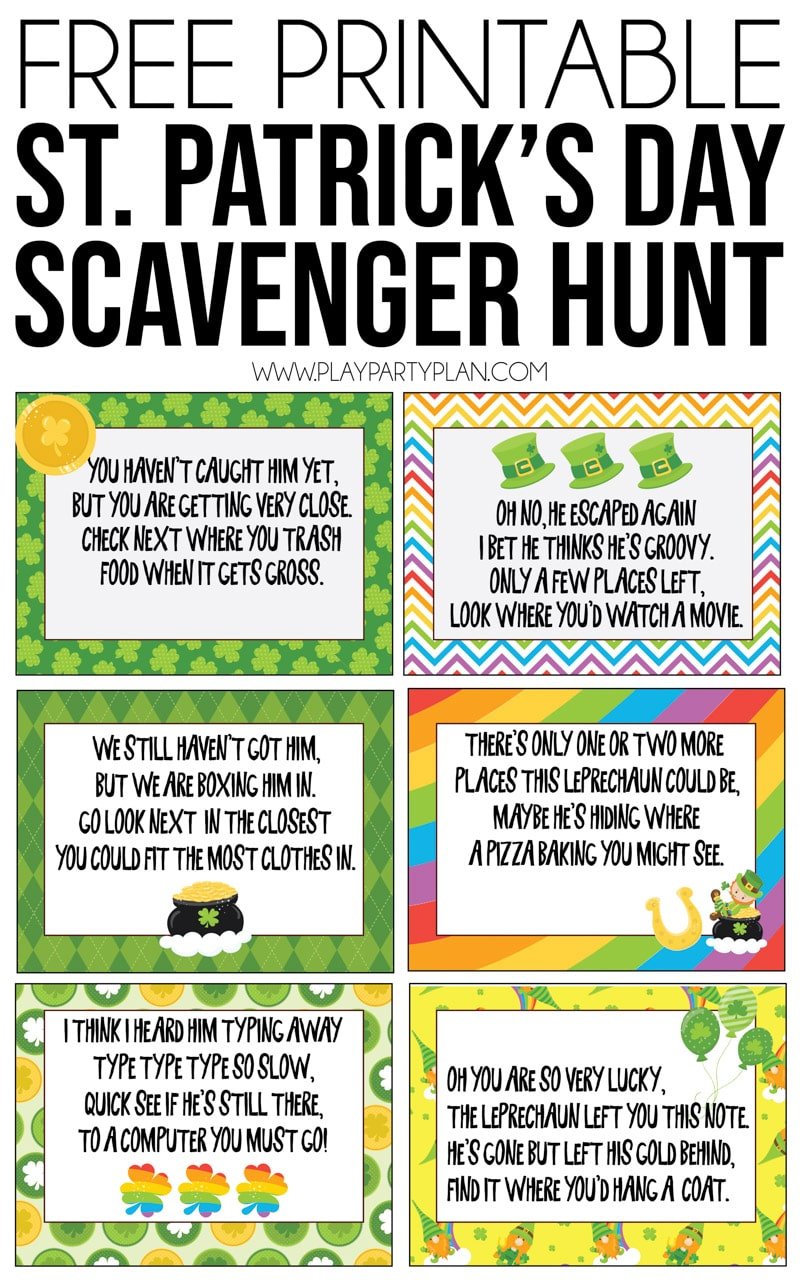 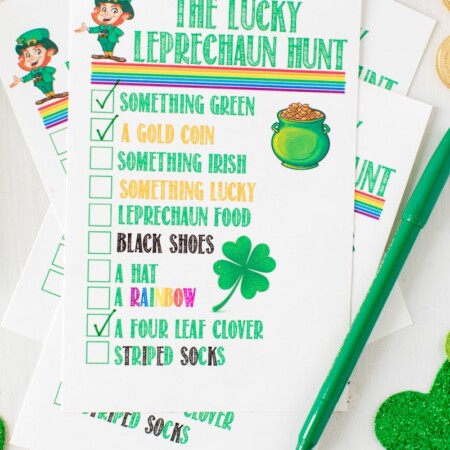 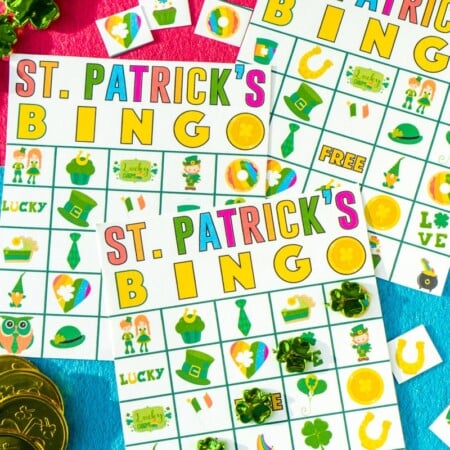