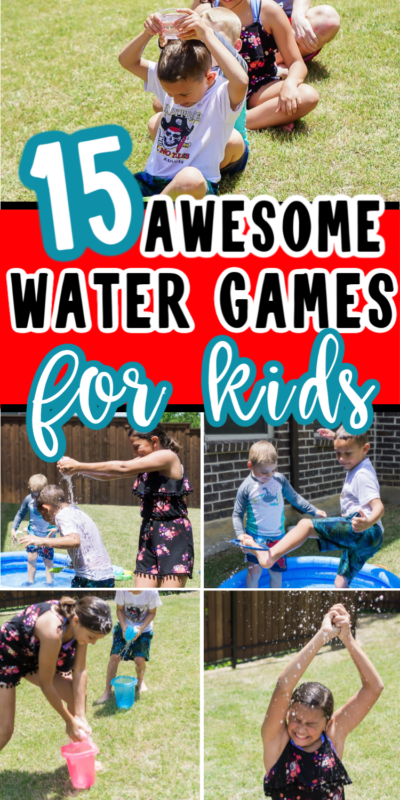 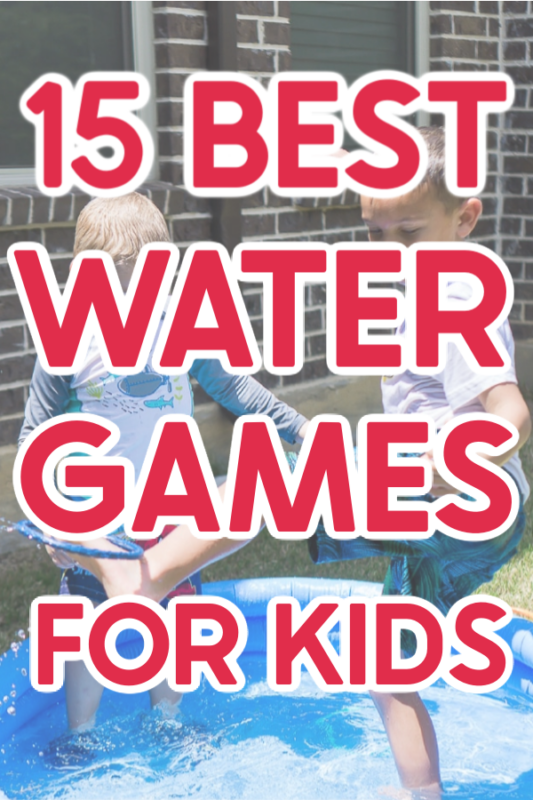 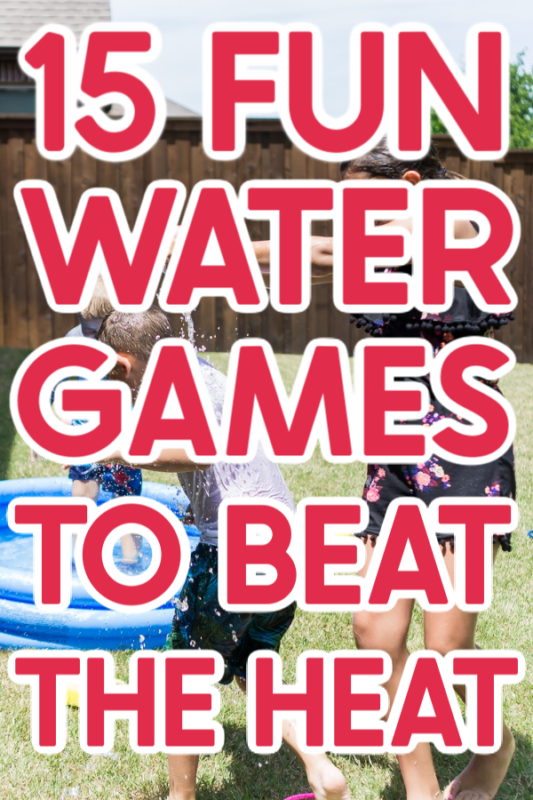 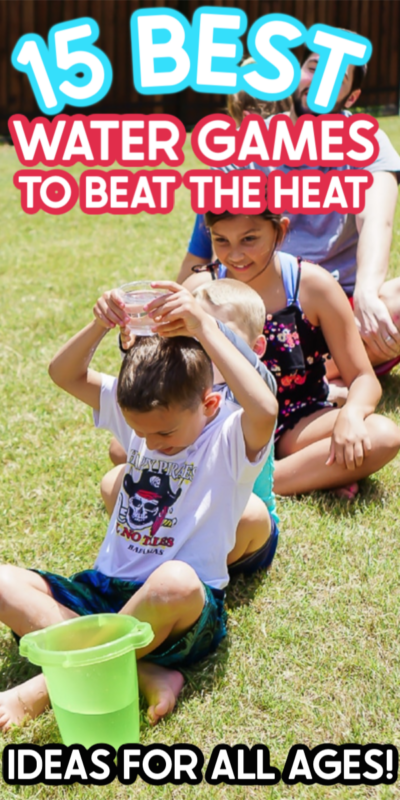 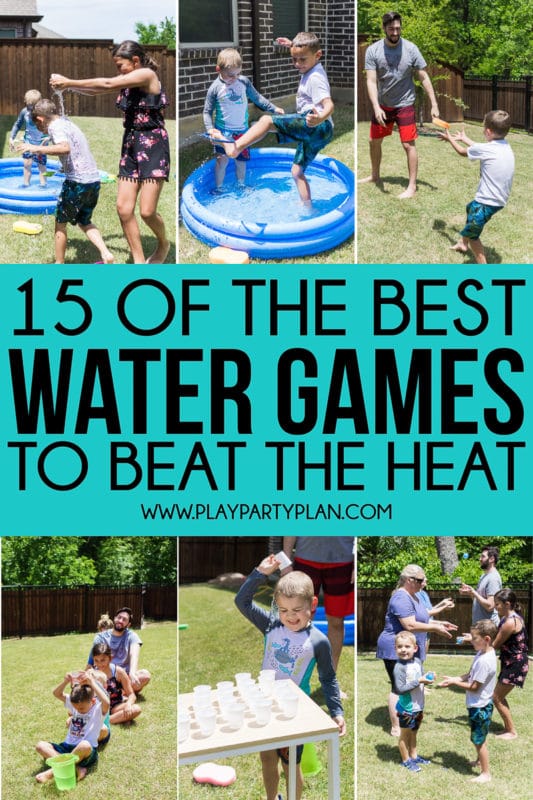 Water ballon games, games to play in the sprinklers, and even one of the most water bottle flip games you’ll ever play! Simply try one or ten of these fun water games on a hot summer day for guaranteed cool down fun!

Water games should be on everyone’s summer bucket list! We played all of these fun water games with my son, my friend’s kids, and my family and had a fantastic time – kids and adults alike!

These would also pair great with these outdoor camping games on a camping trip this summer! Or even used as field day activities for kids for school!

After the water games, why not serve a delicious dessert like these blue lemonade popsicles or this strawberry poke cake?

For each of the games in this list, I’ve written them like they’re water games for kids but also included a note about how you could easily each and every one of these games into water games for adults as well. Or just play all together!

Need more ways to cool down? Play these pool games next!

Here’s a quick glimpse at how fun these games are!

Supplies for These Water Games

Luckily the main supply in any fun water games is simply water. But these water games incorporate a bit more than that but not much more! Here’s a supply list for all of the games – whether you want to just play the water balloon games or all of them!

I’ve included as much information as possible about each of these games but if you still have questions – feel free to leave a comment, and I’ll try to answer! And if you don’t want water games, these fun outdoor games would be a great alternative!

These are water games where either teams are racing to do something whether it be fill a bucket with water or grab a diving ring with their toes!

The first team to fill their bucket wins.

Blindfold everyone in the line.

First team to fill up their bucket to the marked line wins.

Place the buckets much further apart so the sponge has to be tossed harder and longer to get to the next teammate.

First person to fill up their bucket to the marked line wins.

They must keep the sponge on their head walking to the bucket without actually holding it on, just balancing it on their head. If they drop the sponge, they must go back to the filling station.

Use 2-liter soda bottles instead.

The winner is whoever can get something out first or whoever gets out the most things.

Blindfold players for the game.

This section is all about the most fun water games you can play with water balloons! And since these auto-fill water balloons are now a thing, water balloon fights and games are no longer as hard to make happen!

And don’t forget that you can make picking up the water balloon pieces a game too – simply see who can pick up the most pieces in a set amount of time and give the winner a prize like a water gun. Or if you’re playing with young kids, anyone who picks up X number of water balloon pieces and puts them in the trash wins!

Supplies: Water balloons (use these auto-fill ones for faster filling), a large bucket, tape or plastic cones

Water balloon dodgeball is just like regular dodgeball. Here are the rules.

The team who has the last person standing on their team wins.

Balloons must actually break on the players, they can’t just hit people.

Supplies: Water balloons (use these auto-fill ones for faster filling)

Teams must catch the balloon, not drop it (even if it doesn’t break).

Use full-size balloons instead of water balloons.

Supplies: Water balloons and a way to play music

The last person left in the circle wins.

Move the circle out so people are sitting a few feet apart and have to toss the balloon from one person to the next.

If it’s a terrible throw to the next person, that person is out. If it’s a good throw but the person drops it, the person who dropped the balloon is out.

This is just a typical game of red light green light with a sprinkler added. Here are the rules!

The caller will turn their back to the other kid and say “green light.” When they say green light, the rest of the kids will try to move across the yard to reach the caller. When the caller turns around and says, “red light,” kids have to freeze where they are. If they don’t freeze, they will be sent back to the starting line.

Whoever can tag the caller first wins. You can either give out fun prizes or that person becomes the next caller.

Having the sprinkler in the middle of the yard adds a fun element because they never know when the caller will turn around, and they might be right next to the sprinkler getting soaked throughout the red light.

There is no winner, everyone just has fun!

Just like red light green light above, this is a typical kid’s game just with the added fun of using a sprinkler.

Have kids line up on one side of the yard (the minnows) and have one kid (the shark) stand in the middle of the yard. Set up a sprinkler somewhere in the yard that will be the most likely to get people wet.

The sprinkler is also a shark so if they can get hit by the sprinkler, they become a shark as well

The last minnow standing wins and becomes the next shark.

Water Games Just to Get Wet

Last but not least, some water games and activities that are designed solely for the purpose of getting people wet. These are some of the most fun things to do when you want to beat the heat. You can either do these things by themselves or play some of the games above and end with one of these super soakers!

Get out of the hose, water guns, water balloons, cups, buckets, and anything else that you could use to hold water.

Split into two teams and do whatever you can to soak each other. There are no winners – everyone just gets wet!

Buy a long and wide piece of tarp

from a nearby home improvement store.

Tape it down to the grass on a hill. Get the tarp nice and wet and then put the hose at the top of the slide to keep it wet while the kids are playing. Kids can run and jump onto the tarp to slide down to the bottom of the hill.

Even better if you add a little dish soap to make it really slippery!

Or if you don’t want to get a tarp, use this store-bought Slip N’ Slide instead!

Supplies: Dixie cups and a table

Use larger cups OR have someone else dump the cups on people’s heads so they don’t know what is coming (since you can tell if a cup is empty or full).

Choose a couple of the games above and have a water Olympics where teams compete in a series of water games. Give the winners medals made with tin foil and poker chips.

You could combine it with these Olympic party games for a full on Olympic extravaganza!

You can make these games even more fun by giving out little prizes to the winners. Keep the prizes simple and make sure that everyone gets something whether it be a prize or a snow cone. Some simple prize ideas include

Don’t forget to pin these outdoor water games for later! 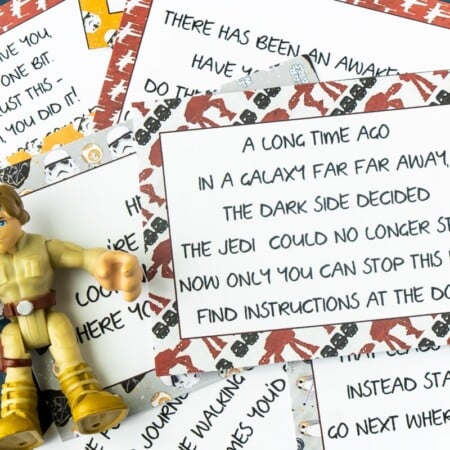 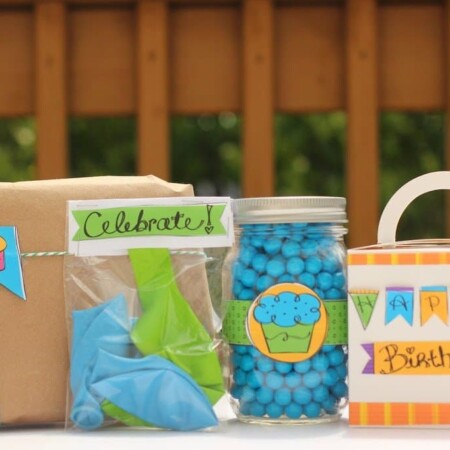 Next Post
30 Creative 30th Birthday Gift Ideas for Him