This rainbow donut recipe is one of the easiest rainbow foods you can make! Simply make your homemade donuts, split the batter, color each batter, and bake in a donut pan for yummy rainbow donuts all year long! 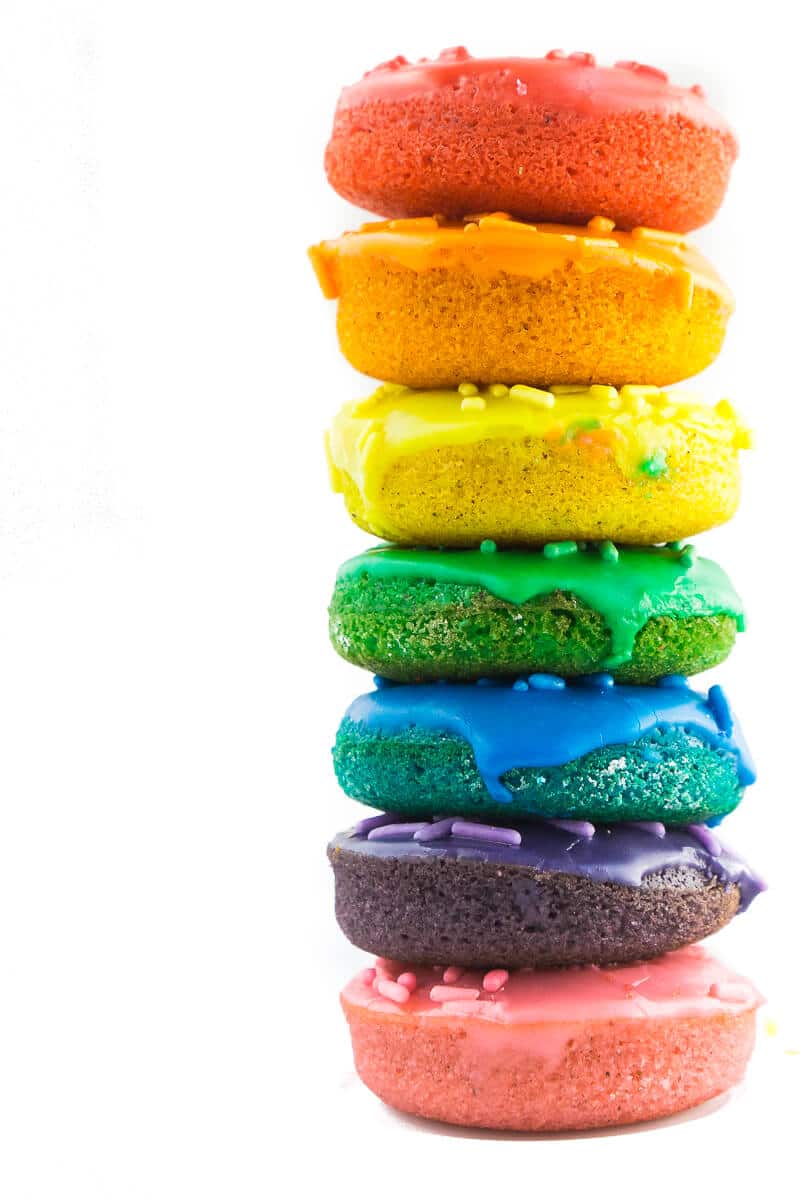 With St. Patrick’s Day right around the corner, I’m seeing rainbows pop up all over the place. I’ve known that I wanted to try my hand at rainbow foods for a while now and knew this would be the perfect time for it and not just because I just threw a Rainbow Butterfly Unicorn Kitty party!

Or because I’ve been dreaming about donut party ideas.

While my son was hanging out with grandma all day, I decided to surprise him and make an entire rainbow full of his favorite food – donuts with sprinkles on top.

He’s such a picky eater and donuts are one of the few things he’ll actually eat. I’m planning to make these again on St. Patrick’s Day at the end of this leprechaun hunt scavenger hunt!

What I’m not telling him is that these donuts aren’t just your everyday ordinary donuts. Not only are they rainbow, they’re actually jam-packed full of healthy VitalProteins collagen peptides, and you would never know by how good they taste. 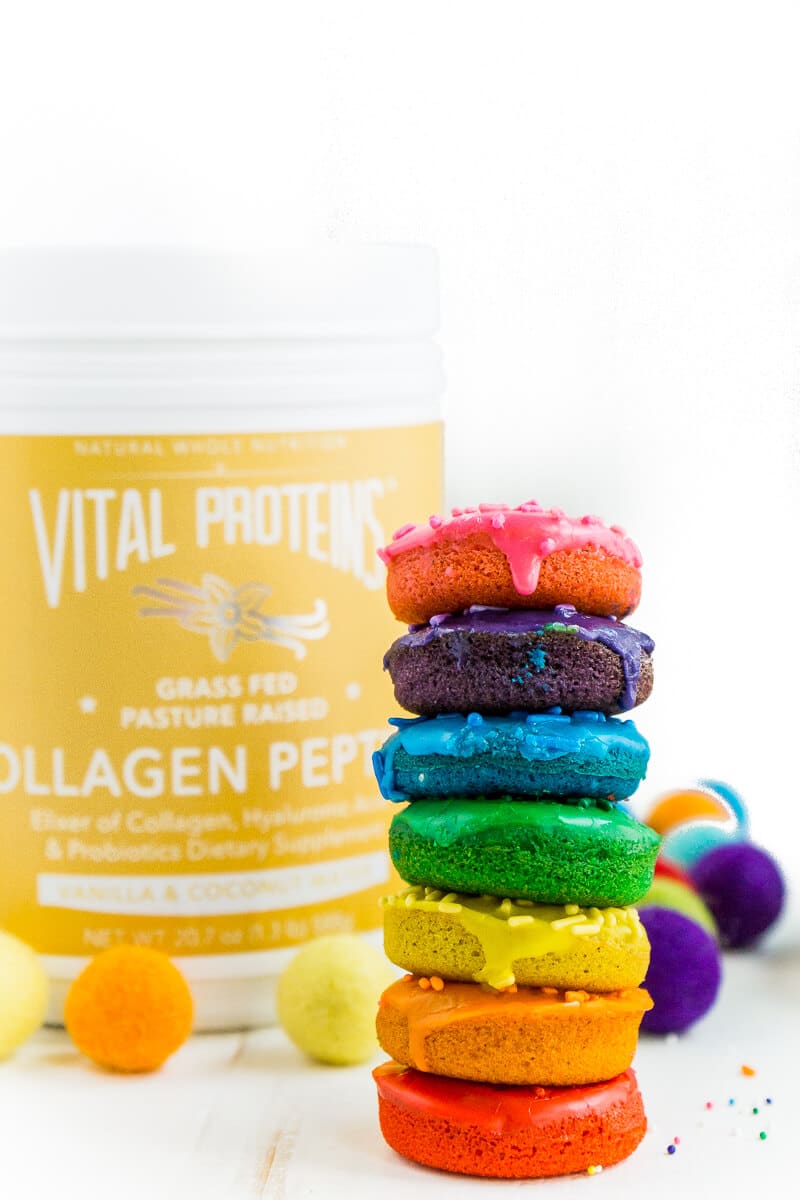 I actually ended up using two different collagen peptides in these donuts. I added in some of the  Vital Proteins Vanilla & Coconut Water Collagen Peptides into the donut batter since there’s a slight vanilla flavor to the peptides already, and that flavor went really well with the other ingredients in the donut batter.

Pretty sure I snuck an entire rainbow of donuts for myself while my son wasn’t watching. These were even better than the mini cheesecakes I made last year! 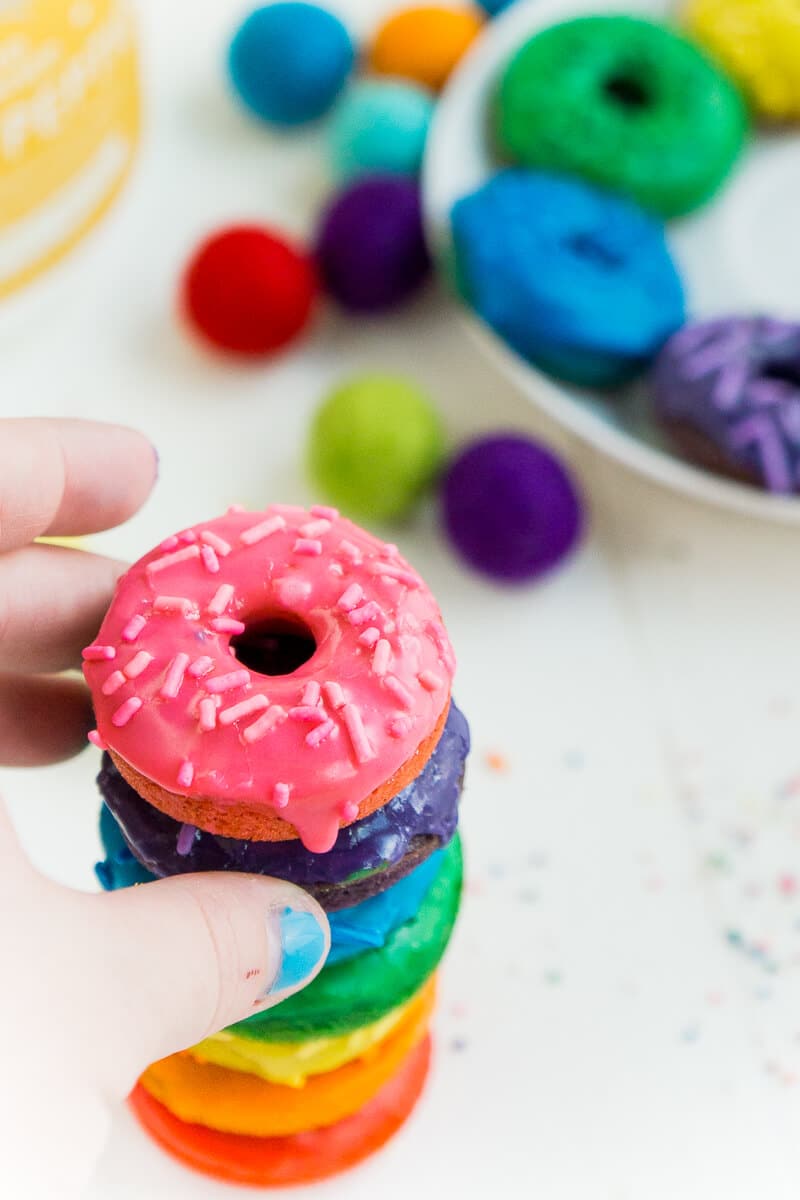 How to Make Rainbow Donuts

This donut recipe is easy to turn into rainbow donuts by simply adding a bit of food coloring into the batter and icing. I made seven different colors – red, orange, yellow, blue, green, violet, and pink – but you could make whatever colors you want, even if they aren’t necessarily in a rainbow.

Like pink, apparently pink isn’t in the main rainbow colors but obviously I like pink, so pink was in. Next time I’ll try to do more of an aqua/cyan color as well to break up the blue and green.

How to Make Donuts in a Donut Pan

There are so many different ways to make donuts, but I prefer to make the batter and bake them in a donut pan, a pan made specifically for baking donuts!

Make your batter, add a tiny bit of food coloring, then scoop the batter into the donut pan, making sure to only fill your donut pan about halfway full.

If you fill it any more, you’ll end up with the donuts overflowing and blocking the hole on the bottom (learned that one from experience). And donuts without holes aren’t the same!

My other tip is to pat the donut pan on the counter when it’s full of batter to get out any air bubbles. I do that for my Boston Creme cupcakes too! Last but not least, when the donuts are done, take them out of the pan pretty much right away and let them cool on a cooling rack or they’ll continue to bake in the hot pan. 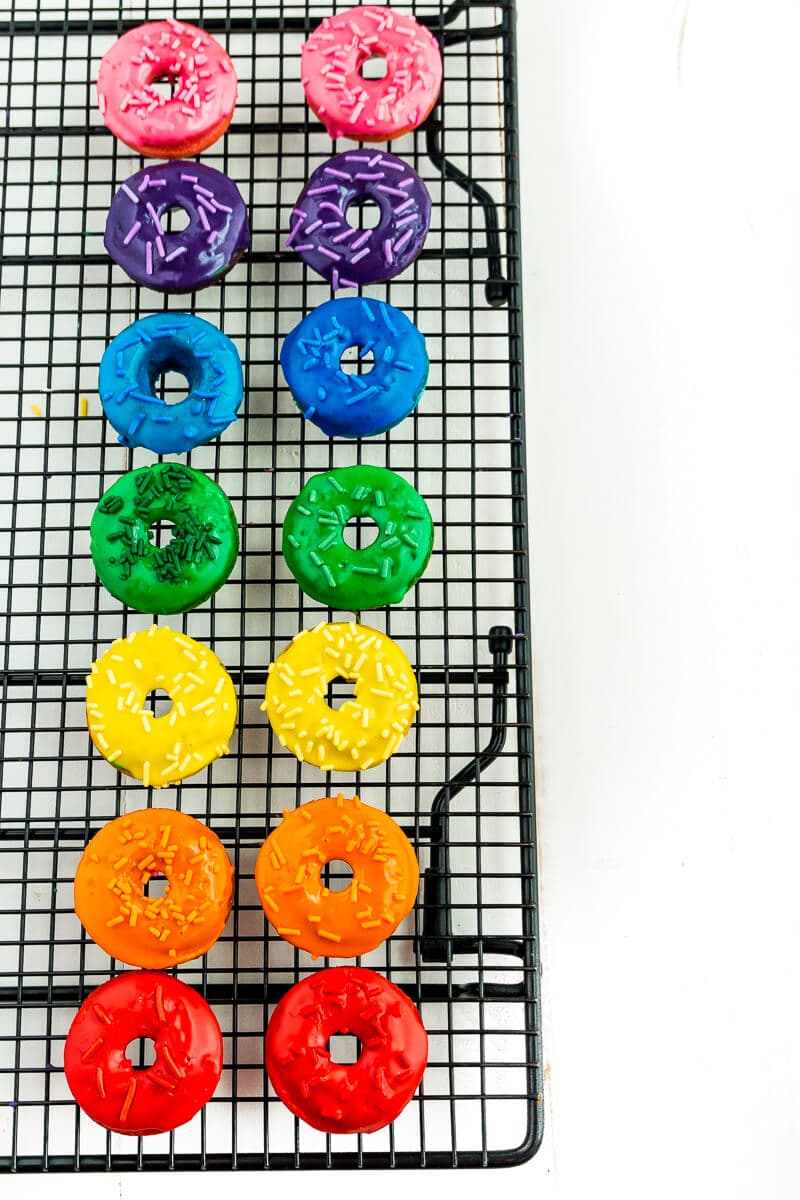 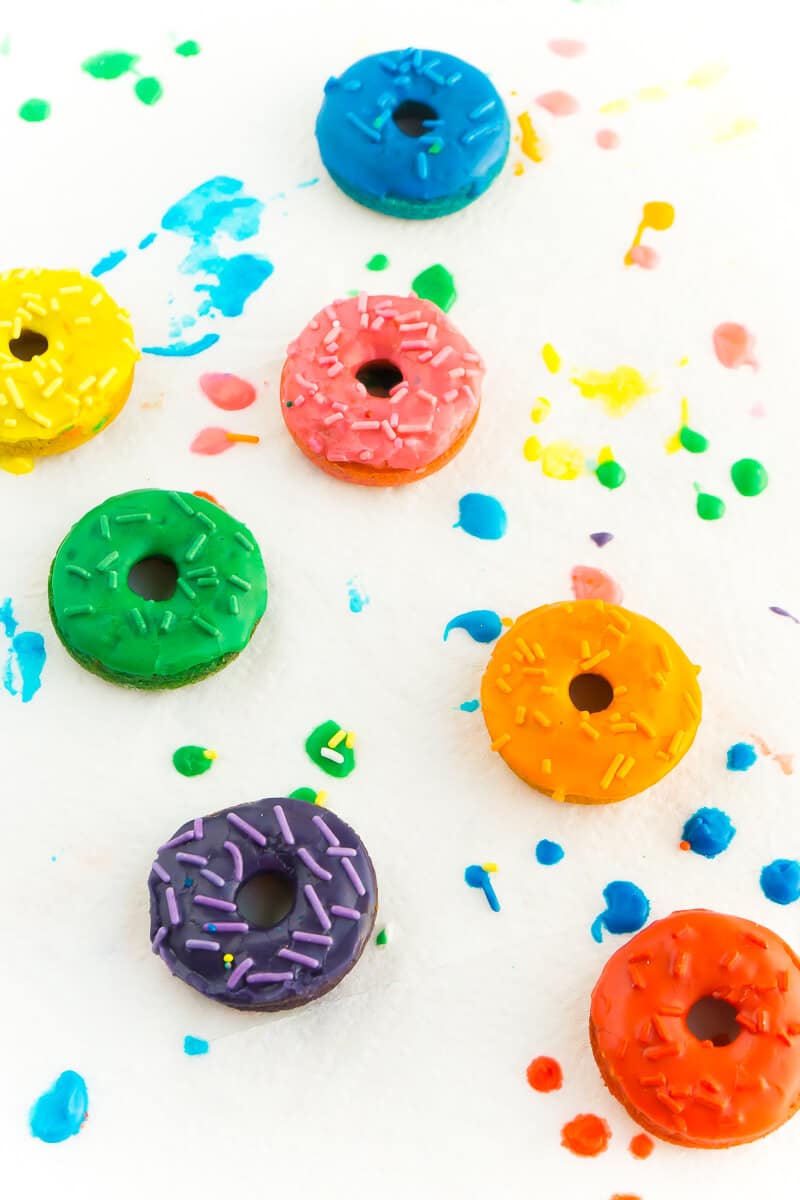 This easy rainbow baked donut recipe is the perfect way to impress guests! Just make up your homemade donuts, add some food coloring, and you're on your way to one of the easiest rainbow foods around! 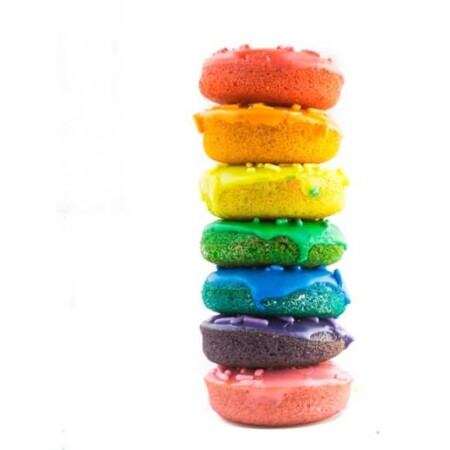 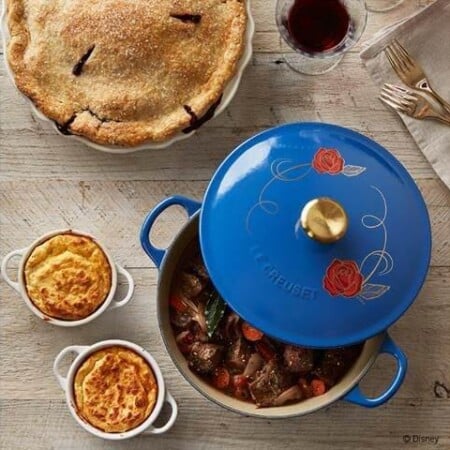 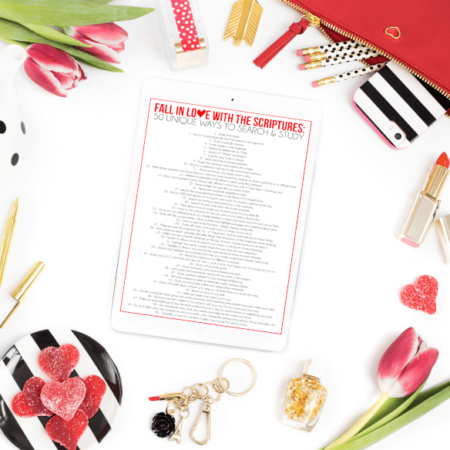